Accessibility links
FACT CHECK: Bernie Sanders And Whether Poor Americans Vote One of Sanders' stats may be off, but it's true that low-income Americans vote in far smaller numbers than their higher-income counterparts. 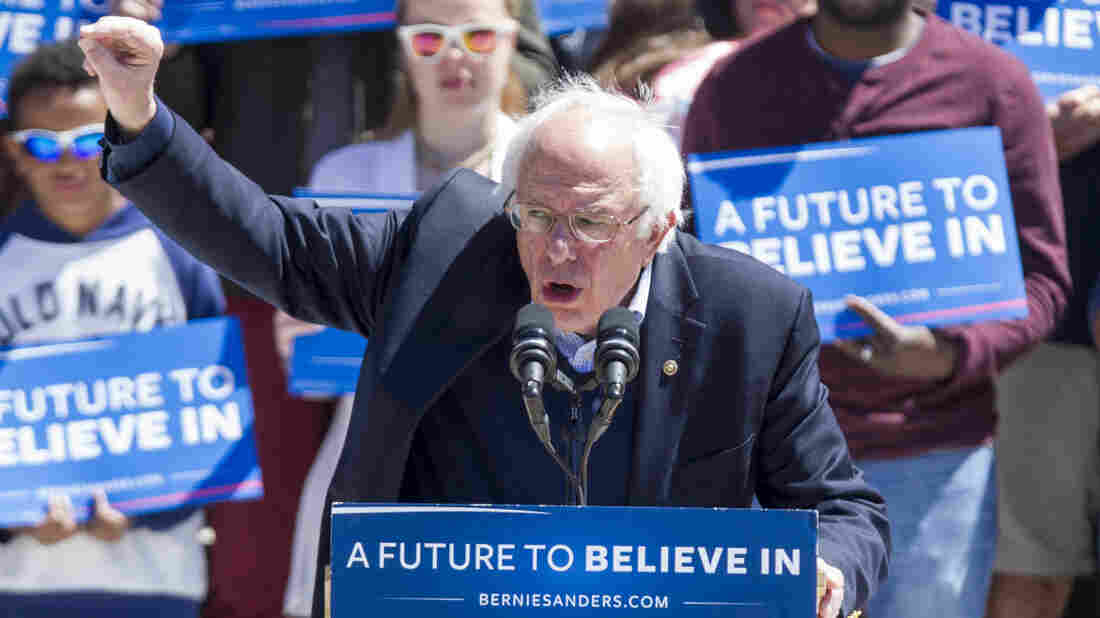 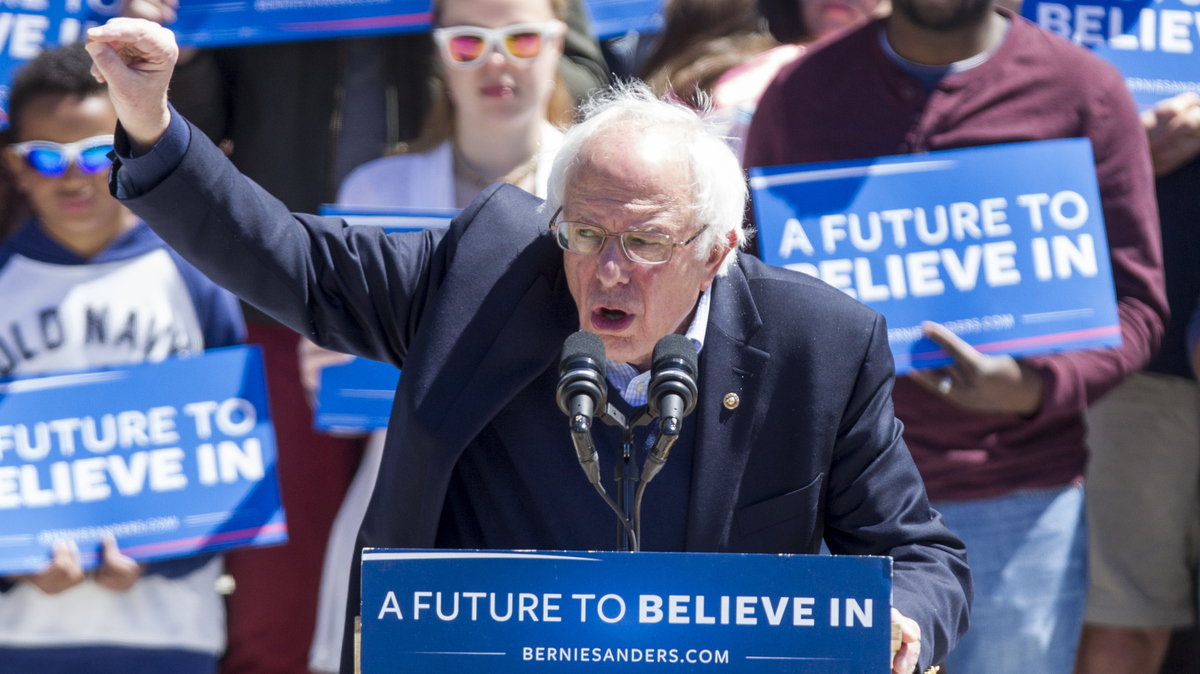 Bernie Sanders speaks during a rally at Roger Williams Park on April 24 in Providence, R.I.

Last week, an NPR analysis found Hillary Clinton outperforms Bernie Sanders in the states with the most income inequality. This weekend on Meet the Press, host Chuck Todd asked about that trend we discovered: Why would Sanders do worse in those states when income inequality is his signature issue?

We decided to look into that claim.

CHUCK TODD: ... So 17 of the 25 states with the highest levels of income inequality have held primaries. Sixteen of those 17 states have been won by Hillary Clinton, not by you. Why?

SEN. BERNIE SANDERS: Well, because poor people don't vote. I mean, that's just a fact. That's a sad reality of American society. And that's what we have to transform. We have one — as you know, one of the lowest voter turnouts of any major country on Earth. We have done a good job bringing young people in. I think we have done-- had some success with lower income people. But in America today — the last election in 2014, 80 percent of poor people did not vote.

Do lower-income Americans vote that much less than the rest of the population? And did 80 percent of poor Americans really not vote in 2014?

Sanders may be off on that 80 percent figure, especially depending on how you define "poor." But his broader point stands: Poorer Americans do vote less than richer Americans.

We reached out to the Sanders campaign about these stats, and they sent us a source: a 2015 Pew report on financial insecurity and voting patterns. In that report, Pew separated Americans into five different groups based on their levels of financial security (derived from their responses to questions about how hard it is to pay their bills, whether they receive means-tested benefits like SNAP, and so on).

Those financially insecure people were much less likely to vote than the people with firmer financial footing. In that lowest-security group, only 20 percent of people were "likely voters" in that September-October 2014 survey (according to a Pew scale that determined a person's likelihood of voting). But the likelihood of voting goes up as financial security does — 63 percent of the most financially secure Americans were considered "likely voters."

So did 20 percent end up voting?

Census data says they did — and then some. Pew didn't exactly study based on income, but when the Census Bureau did in 2014, it found that among Americans in families making less than $10,000 (the lowest income group they studied), 24.5 percent voted (65.1 percent of those people said they didn't vote; the other 10.3 percent were classified as "nonrespondents").

So up to 75.5 percent of those very lowest income families didn't vote in 2014 (that is, the nonvoters plus the nonrespondents). That's close to 80 percent, which lends some weight to Sanders' claim.

But only some weight. That non-voting share may also be as low as 65 percent, given those nonrespondents.

Not only that, but there are plenty of people who make more than $10,000 per year who could still be considered "poor" or, in Pew's study, "financially insecure." After all, that group of people in families making $10,000 or less is only around 3.1 percent of all U.S. adults. There are plenty more people in the U.S. who are "poor" by one definition or another.

And the higher the income over that $10,000 mark, the more people voted in 2014, according to the Census Bureau, meaning that as income gets higher, the further the voting rate gets from that 20 percent mark.

So Sanders may be stretching it on that 80 percent figure.

However, his broader point stands: Lower-income people do tend to vote less than higher-income people. In those census data, voting rates go up with income levels — the highest-income group, people in families making $150,000 or more, also had the highest turnout, at 56.6 percent.

And for further reading, here are two great analyses of this trend of low-income voters' low turnout: one from Sean McElwee in Politico Magazine in January 2015, and one from Daniel Weeks in the Atlantic in January 2014.

(Aside: For the record, Sanders is also right on that stat about the U.S. having one of the lowest turnouts of any major country on earth. According to data compiled by Pew from the OECD — an organization of developed nations — the voting rate in the U.S. was around 54 percent of the voting-age population in the 2012 election. That makes it 31st out of 34 countries in terms of voting rates.)

(Aside No. 2: PolitiFact, for its part, gave Sanders' "80 percent of poor people didn't vote" claim a "Mostly True" rating.)

Sanders' answer was meant to address why he didn't perform better in unequal states. But it's not clear that if more poorer people voted in the primaries and caucuses that Sanders would have performed better. In some states like Iowa and Massachusetts, he performed close to or better than Clinton among lower-income people, while higher-income people preferred her, according to entrance and exit polls.

But as John Dickerson pointed out on CBS's Face the Nation this weekend, there were several states in which the trend was reversed:

"[I]n states like Ohio, Florida, New York, and even Michigan, which you won, those who would be — those earning less than $30,000 ended up voting more for Hillary Clinton. So, that doesn't seem to be the case," he said.

It's possible that more poor people turning out might help Sanders more — after all, many young people (who have been reliable sources of support for Sanders) are in school and earning little, and many others are at the start of their careers, earning less than their older counterparts.

But if the trend seen in the exit polls thus far held and more of those lower-income people turned out, they might not have boosted Sanders all that much.

At any rate, one other important point: The fact that so many Americans don't vote (and that those people tend to disproportionately be lower-income) matters in election outcomes.

In a 2014 report, Pew found that nearly half of nonvoters (that is, people who weren't registered or who were unlikely to vote) had a family income of less than $30,000 (compared with 19 percent of voters).

And those nonvoters had measurably different political views in some areas from likely voters. Nonvoters were more likely to be Democrats or lean Democrat, and they also were more likely to say that government aid to the poor "does more good than harm."

One other interesting facet of the interaction between income and turnout: As McElwee pointed out in that Politico article, research suggests that "higher class bias in the electorate actually leads to higher levels of income inequality." So if this trend of lower turnout among lower-income Americans continues, it could make inequality (the trend Todd was asking Sanders about in the first place) even higher.

Voting and Registration in the Election of November 2012 U.S. Census Bureau, accessed April 25, 2016