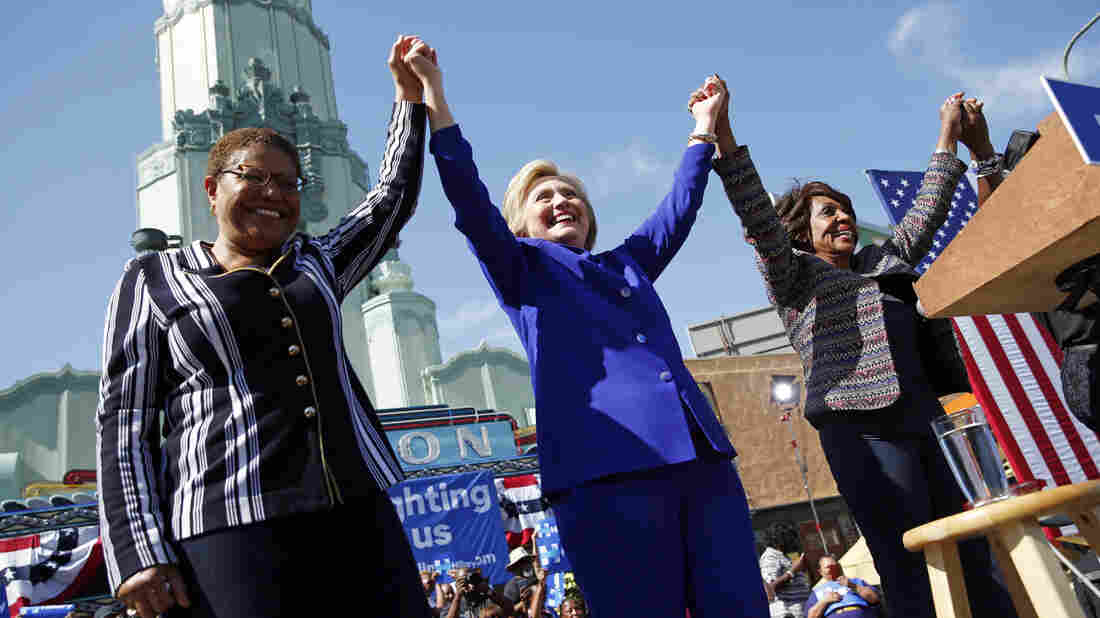 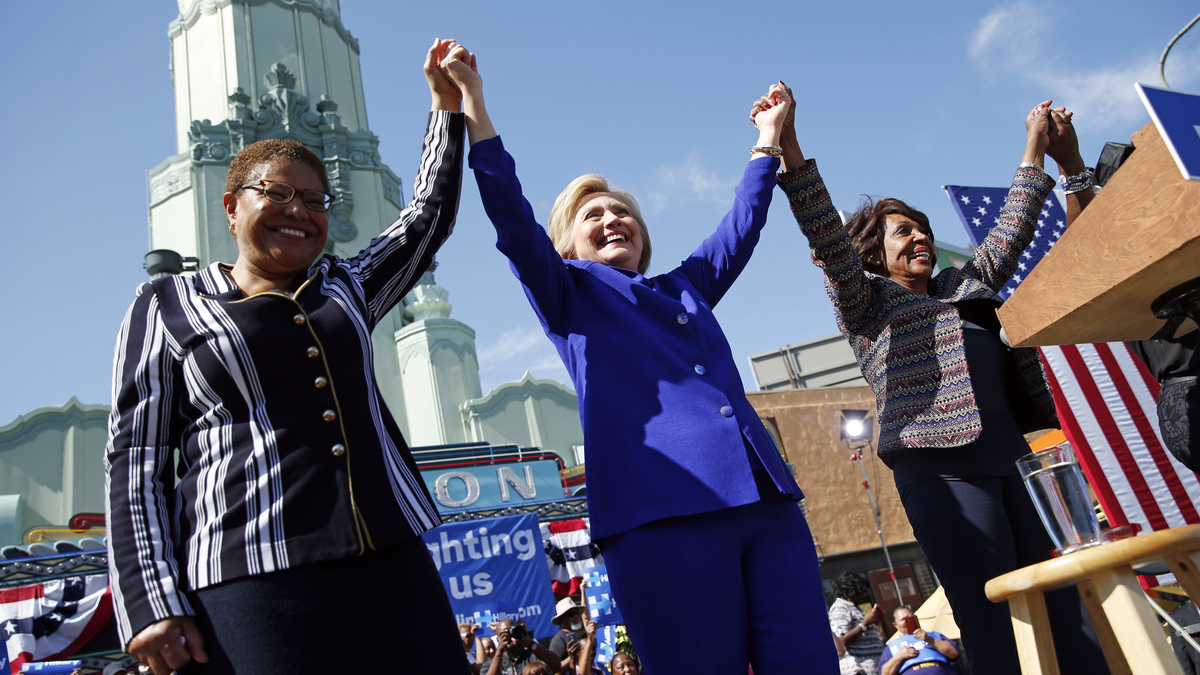 Hillary Clinton, now the presumptive presidential nominee for the Democratic Party, has become the first woman to top a major U.S. political party ticket. An updated count from The Associated Press shows that she now has support from the 2,383 delegates needed to clinch the nomination.

Clinton supporters got emotional on the campaign trail in California this week as the candidate closed in on the nomination.

"We're making history, and that is the revolution," retired schoolteacher Monica Brown told NPR's Tamara Keith through tears at a Clinton event. "Hillary to me represents those dreams that women can do anything they want and here you are. That any girl can do anything that they want."

Clinton herself reflected on the historic moment on Monday, saying, "It's really emotional, and I am someone who has been very touched and really encouraged by this extraordinary conviction that people have."

"This is the final glass ceiling," said Alan Schechter, political science professor emeritus at Wellesley College and Clinton's thesis adviser. He has known her for 50 years and added, "I'm extremely proud of her."

That "glass ceiling" (a phrase Clinton herself has used often) milestone has been somewhat lost in the drama of this campaign, but is still "a really important moment in American society," political science professor Andra Gillespie of Emory University told NPR earlier this year.

"The impact is just as important for a woman to head the top of a major-party ticket as it was for an African-American to do so eight years ago," she said.

As Gillespie sees it, whoever is at the top of a presidential ticket is "a metric by which we can talk about how America has diversified, how it has become more inclusive, that you're now letting people who don't fit the traditional white, male model assume positions of leadership in the country."

When Clinton failed to get the Democratic nomination in 2008, she spoke about how her candidacy did put cracks in the "highest, hardest glass ceiling."

"Although we weren't able to shatter that highest, hardest glass ceiling this time, thanks to you, it's got about 18 million cracks in it," she said. "And the light is shining through like never before, filling us all with the hope and the sure knowledge that the path will be a little easier next time."

Her success in the campaign now, Gillespie said, is "very much a testament to the work that the suffragettes started over 150 years ago."

Women Who Came Before: From Woodhull And Chisholm To Ferraro And Palin

The first woman to run for president came along about 150 years ago — Victoria Claflin Woodhull. It was 1872, before women were able to vote. She was a fortune teller who opened her own brokerage firm and started a newspaper that promoted women's suffrage. 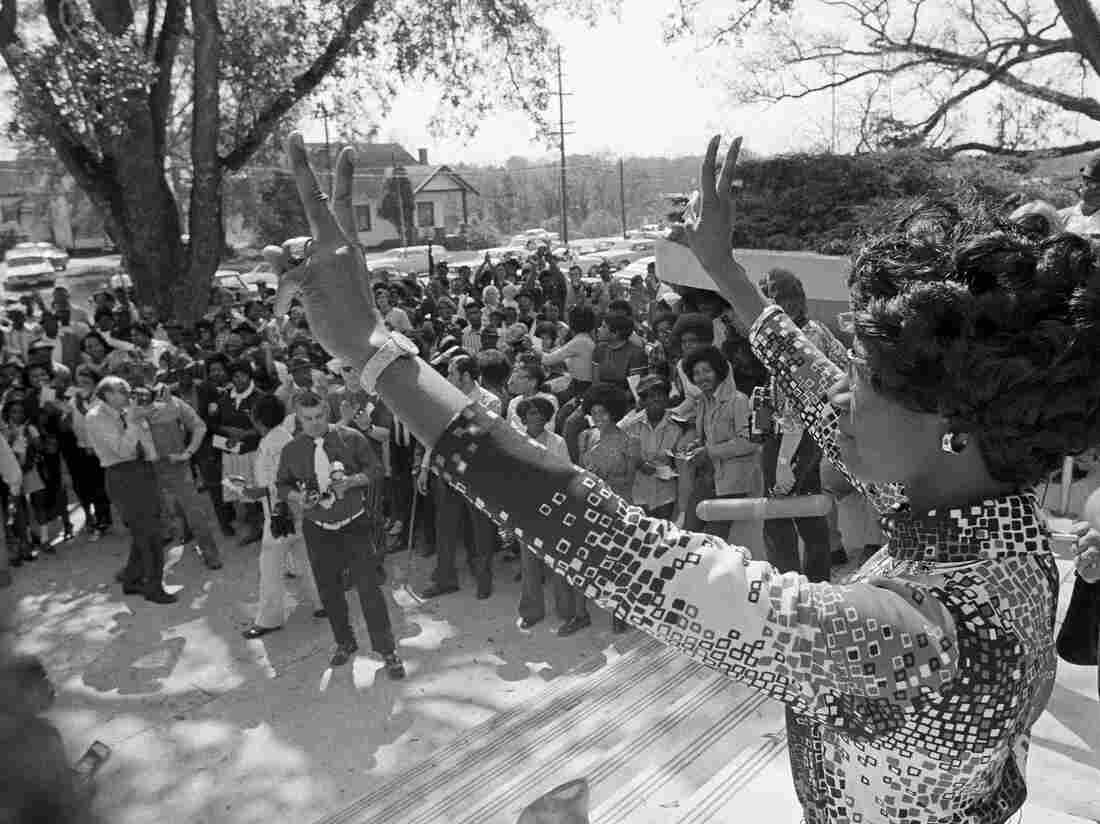 Shirley Chisholm makes victory signs as she addresses a crowd of several hundred in Florida while campaigning for the presidential primary in 1972. Bill Hudson/AP hide caption 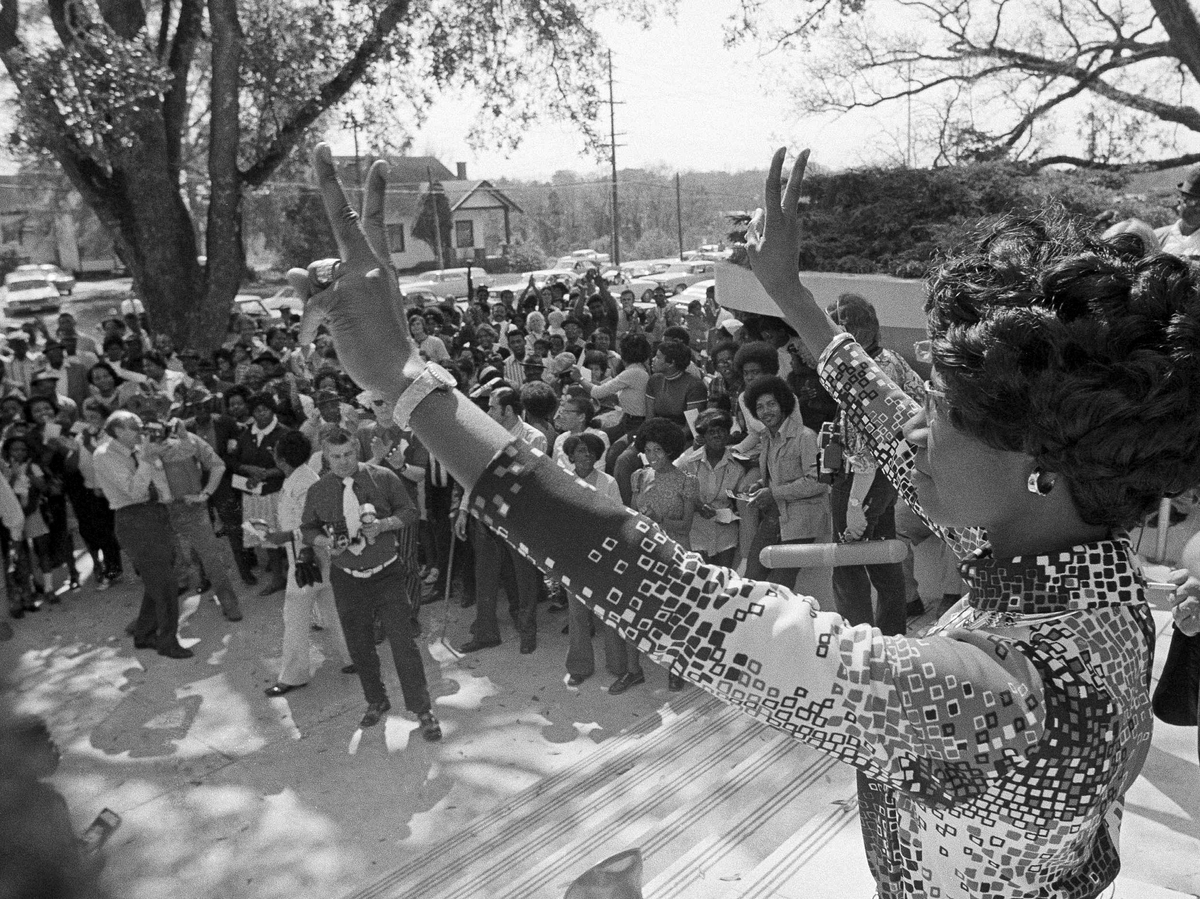 Shirley Chisholm makes victory signs as she addresses a crowd of several hundred in Florida while campaigning for the presidential primary in 1972.

There were others along the way, but the next to gain wide attention in modern history was Shirley Chisholm, who ran for president in 1972. She had considerable experience, having served in Congress (the first black woman to do so). But she failed to garner widespread support. Though her run holds its own place in history — she was the first African-American and first woman to run for a major party's nomination — she ultimately didn't get very far. She won 152 votes at that year's Democratic National Convention.

The first woman to make it onto a major-party ticket was Geraldine Ferraro, who accepted the Democratic nomination for vice president in 1984.

"She really drew huge crowds; I think she was very appealing out there doing the whole thing," said Patricia Schroeder, a longtime friend of Ferraro, who served with her in Congress. "Especially for young women, it was very, very important to see [that] ... it's just kind of one more thing you could do. 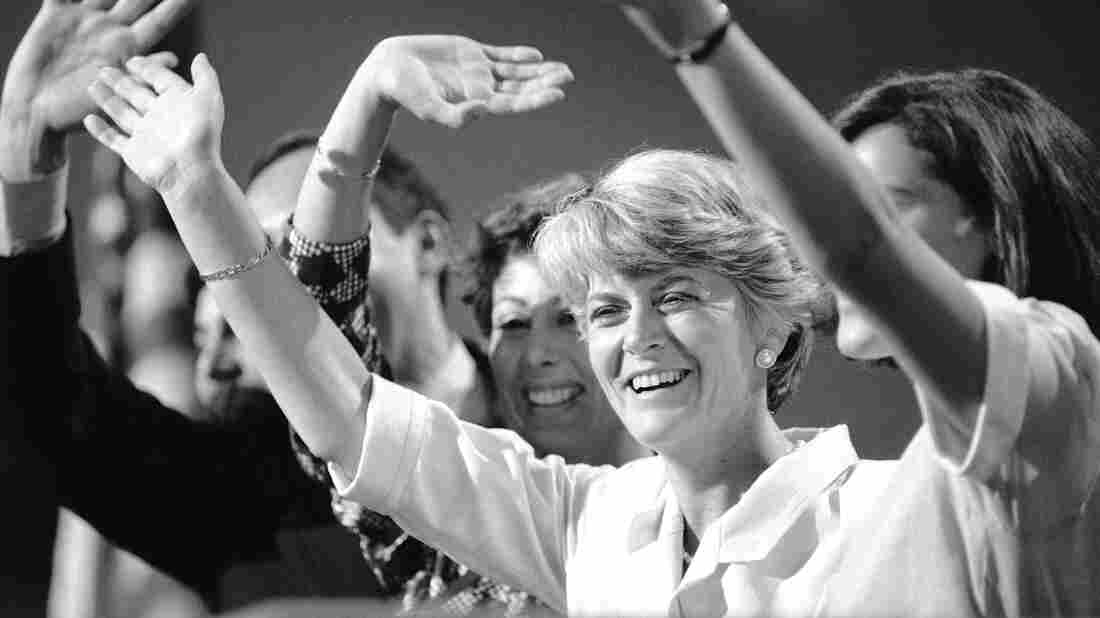 Democrat Geraldine Ferraro waves from the podium after accepting the vice presidential nomination at the the Democratic National Convention in 1984. AP hide caption 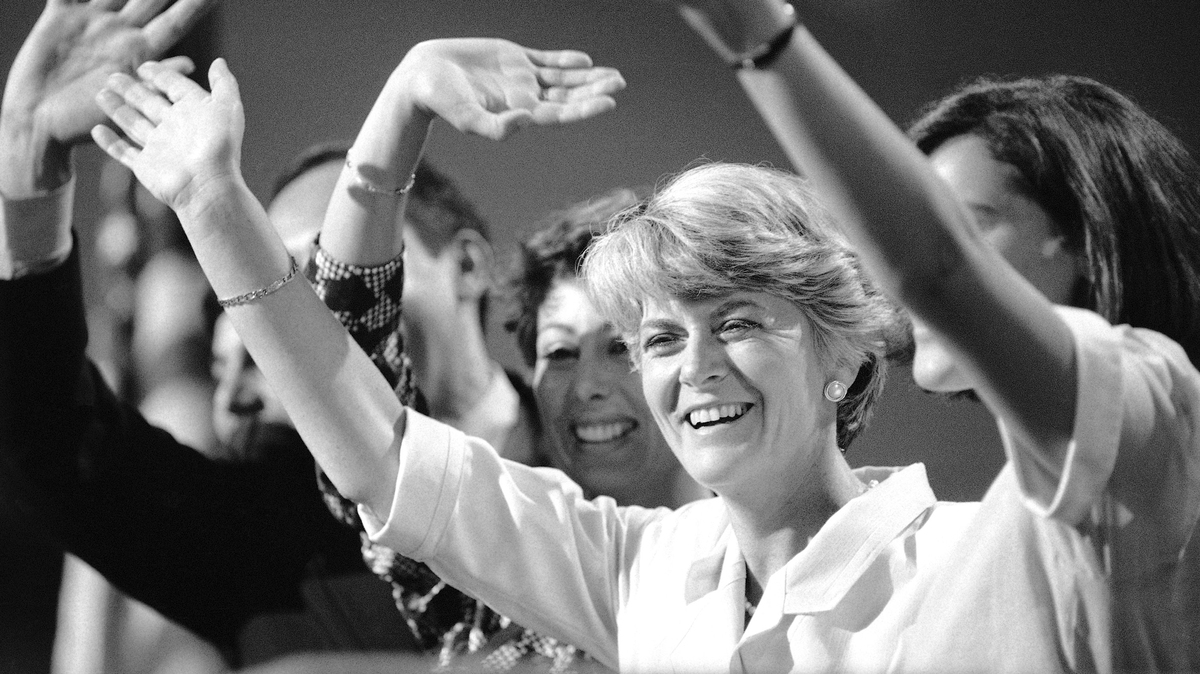 Democrat Geraldine Ferraro waves from the podium after accepting the vice presidential nomination at the the Democratic National Convention in 1984.

"The sad part is, we didn't really have anyone else for a very long time. I had said, wrongly in retrospect, that she was so terrific as a candidate, that I didn't think any party would have tickets that were all-male going forward. I thought there would be a bunch more diversity."

Schroeder considered her own run for president in 1988, the following presidential election, but ultimately decided against it because she felt she couldn't raise enough money or build her organization quickly enough to run a competitive campaign.

After Ferraro, it would indeed be a long time — 24 years — until another woman made it onto a major-party ticket. That was 2008, when Sarah Palin was selected as John McCain's running mate. Palin was run through the white-hot spotlight of national scrutiny, from her policy positions to her choice of outfits.

In between, there were some advances for women in congressional politics. The "Year of the Woman" came in 1992, when a record five women, all Democrats — Dianne Feinstein, Barbara Boxer, Barbara Mikulski, Patty Murray and Carol Moseley Braun — were elected to the Senate. Moseley Braun went on to run a failed presidential bid in 2004.

A Different Kind Of 'First'

President Obama achieved a "first" of another kind — as the first African-American to win the Democratic nomination and be elected president. But Gillespie said Clinton has been free to talk about her "first" (gender) in a way Obama was not able to talk about race.

Gillespie refers to Obama as a "de-racialized black politician" — meaning he shied from emphasizing race in order to appeal to non-black voters.

Clinton, on the other hand, has leaned into her gender, making paid family leave and equal pay mainstays on the campaign trail. She suggested in April that half her Cabinet could be women. And she'll consider female running mates, a campaign official told the Boston Globe.

"When Hillary Clinton says half her Cabinet could be female," Gillespie observed, "I mean, can you imagine what would have happened if [Obama] had said, 'Half of my Cabinet seats are going to go to African-Americans'?"

Clinton's strategy seems to be paying off among women, who have overwhelmingly favored the candidate in most primary states so far.

As NPR's Asma Khalid reported, if the current trajectory continues, Clinton could turn the traditional gender gap into a gender gulf in November. That could be especially true if she goes head to head with GOP front-runner Donald Trump, who has a 70 percent unfavorable rating among women, according to recent national polls.

Trump foreshadowed that fight on the campaign trail in April, saying, "If Hillary Clinton were a man, I don't think she'd get more than 5 percent of the vote."

Note: A version of this article was originally published on April 27, 2016.