Accessibility links
Ted Cruz Names Carly Fiorina As His Vice Presidential Pick The "major announcement" from the Texas senator is a last-ditch effort designed to shake up the GOP primary race, one in which he badly trails front-runner Donald Trump. 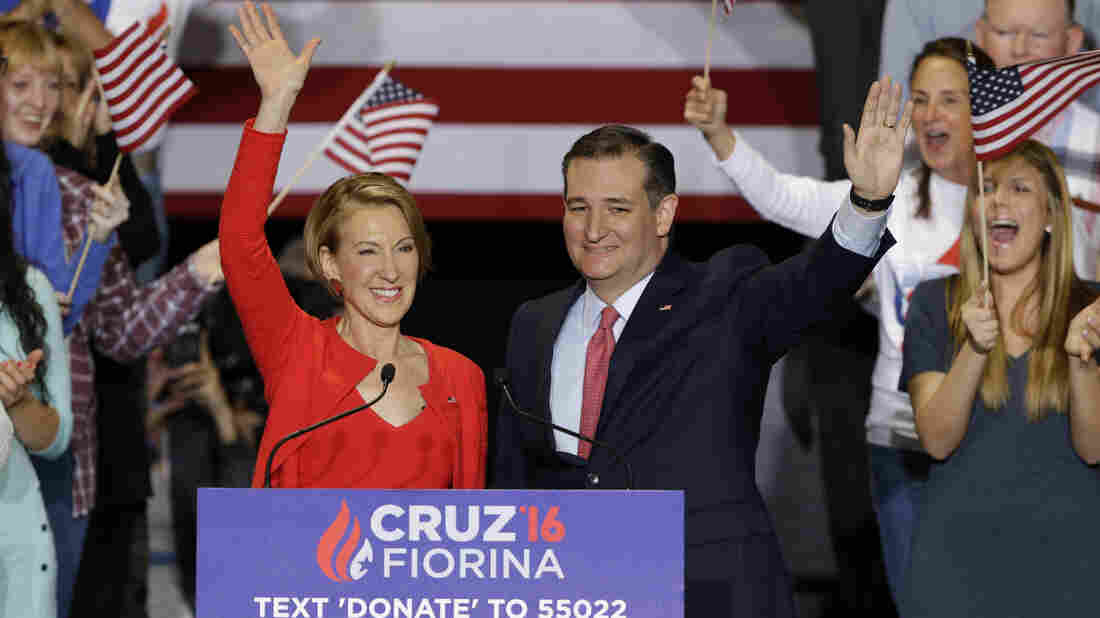 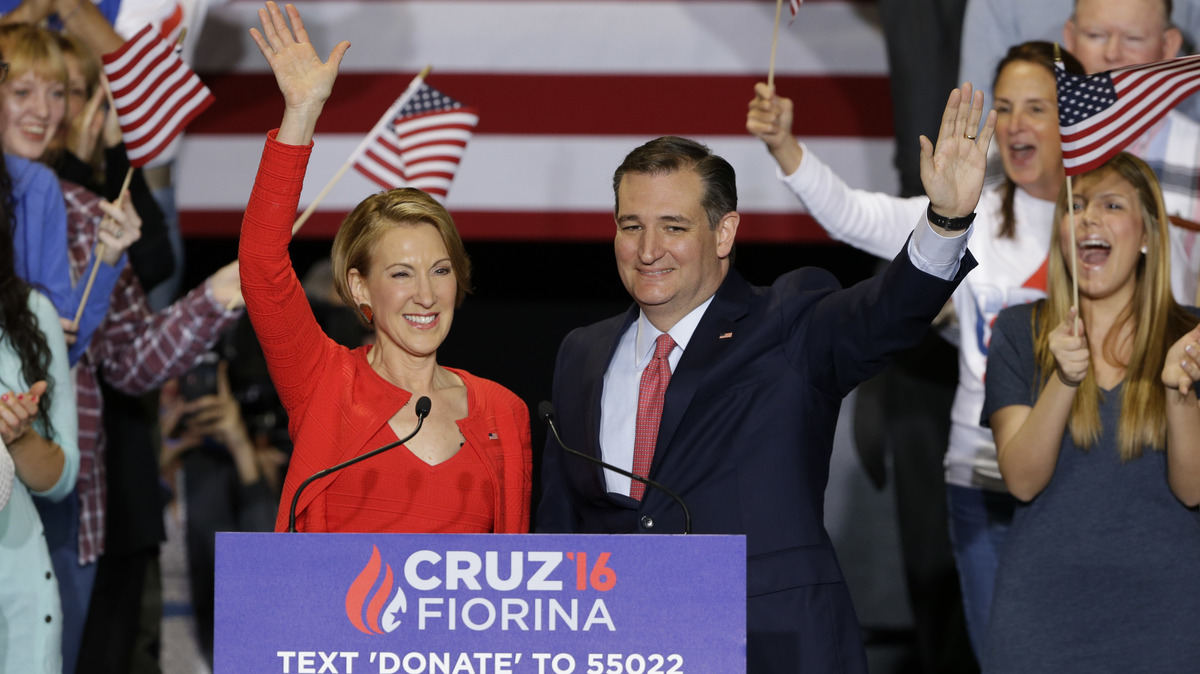 Republican presidential candidate Sen. Ted Cruz is joined by former Hewlett-Packard CEO Carly Fiorina during a rally in Indianapolis on Wednesday. Cruz announced he has tapped Fiorina to serve as his running mate.

Ted Cruz announced Wednesday he is picking former rival Carly Fiorina as his running mate in a last-ditch move designed to shake up the GOP primary race in which he badly trails Donald Trump.

Calling his decision "one of the most solemn choices you make" as a candidate, at a rally in Indianapolis, Ind., Cruz praised Fiorina's business experience, character and past ability to stand up to the Republican front-runner.

He acknowledged his decision to name a running mate now was an unorthodox and unprecedented move, but that "all of us can acknowledge that this race, if anything, is unusual."

5 Things You Should Know About Carly Fiorina

"I make this announcement today so that you, the voters, will know what you will get," Cruz said.

After a lengthy nearly half-hour introduction by Cruz, Fiorina finally took the stage as a worker changed the signs to their new campaign logo that read "Cruz Fiorina '16."

"This is the fight of our time, and I believe Ted Cruz is the man to lead that fight," the former Hewlett-Packard chief executive said as she accepted his offer to join the hypothetical GOP ticket.

Fiorina ran for president herself earlier this year before withdrawing after a disappointing showing in New Hampshire. She peaked early in the contest with a forceful showing in the first GOP debate, and proved herself to be a salient attack dog against Democrat Hillary Clinton. She endorsed Cruz in early March and has been a frequent, energetic surrogate for the Texas senator.

But actually getting the duo's ticket to victory in the Republican race is an uphill, and some would say improbable, battle. After Trump's Northeastern sweep on Tuesday night, it's mathematically impossible for Cruz to net enough delegates to win on the first ballot if Trump doesn't reach the requisite 1,237 delegates needed to clinch the nomination.

Earlier Wednesday on Fox News, Trump mocked the rumors that Cruz was making the Fiorina announcement later that afternoon.

"He's got no path to victory and he's naming a vice presidential candidate. I guess that's cute," Trump deadpanned.

Cruz trails Trump now by almost 400 delegates, and he needs a big win next Tuesday in Indiana to even hope to close the gap. The surprise pre-emptive announcement of Fiorina as his running mate is designed to try to move more support in the Hoosier State his way. There were more machinations to try to salvage his hopes in Indiana over the weekend when he and Ohio Gov. John Kasich's campaign announced an informal alliance where Kasich (who is a distant third in delegates) agreed he wouldn't campaign in Indiana while Cruz ceded New Mexico and Oregon to Kasich.

His announcement of Fiorina is a Hail Mary political calculation designed to salvage his fading White House hopes. In 1976, Ronald Reagan tried something similar by announcing he would name Pennsylvania Sen. Richard Schweiker as his would-be vice president. But that move came after all primaries had concluded, and he was still trailing President Gerald Ford in delegates. The gamble failed and the incumbent Republican wrested enough delegates to secure the nomination on the first ballot.

Fiorina could be helpful for Cruz in another state where he badly needs to stop Trump: California, which votes on the last major primary day, June 7. She unsuccessfully ran for Senate in 2010 in the state. But her selection could also reopen criticisms that resurfaced during that failed run and her own White House campaign, over her tenure and eventual ouster from HP coupled with layoffs at the tech company.

The Cruz announcement of Fiorina as his running mate designate comes after Hillary Clinton has also essentially clinched the Democratic nomination, which would make her the first female major party nominee in history. Republicans believed early on in the race that Fiorina, the only woman in the GOP race, could uniquely criticize Clinton in a way without the backlash that other male candidates might risk.

Many Republicans worry that if Trump is the nominee, he will alienate female voters in the general election given his past controversial comments on women — a fear exacerbated by his victory speech last night where he blasted Clinton for playing "the woman's card."

"If Hillary Clinton were a man, I don't think she would get 5 percent of the vote," he jabbed at the end of his remarks.

Trump has been critical of Fiorina as well in the past, particularly her looks.

"Look at that face!" Trump said in a Rolling Stone article last September. "Would anyone vote for that? Can you imagine that, the face of our next president."

"Ladies, look at this face," Fiorina fired back on the campaign trail. "This is the face of a 61-year-old woman. I am proud of every year and every wrinkle."