Accessibility links
3 Things To Know About The 'Woman Card' In The 2016 Election Trump says Clinton is playing the woman card, but gender shouldn't play a huge role in a November race (and Democrats always win the women's vote these days, anyway). 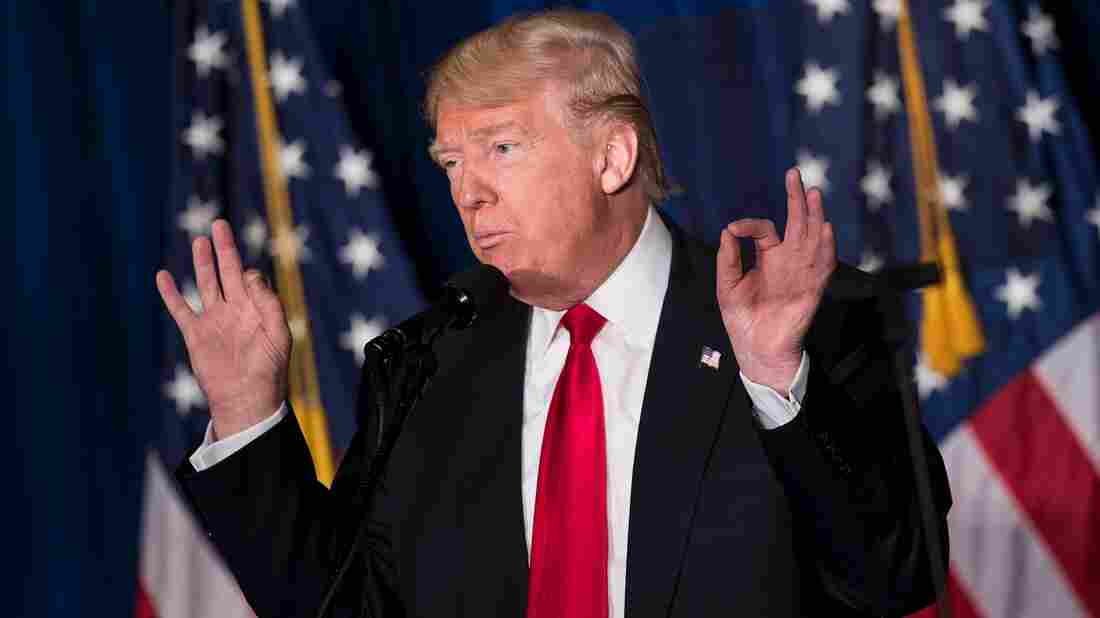 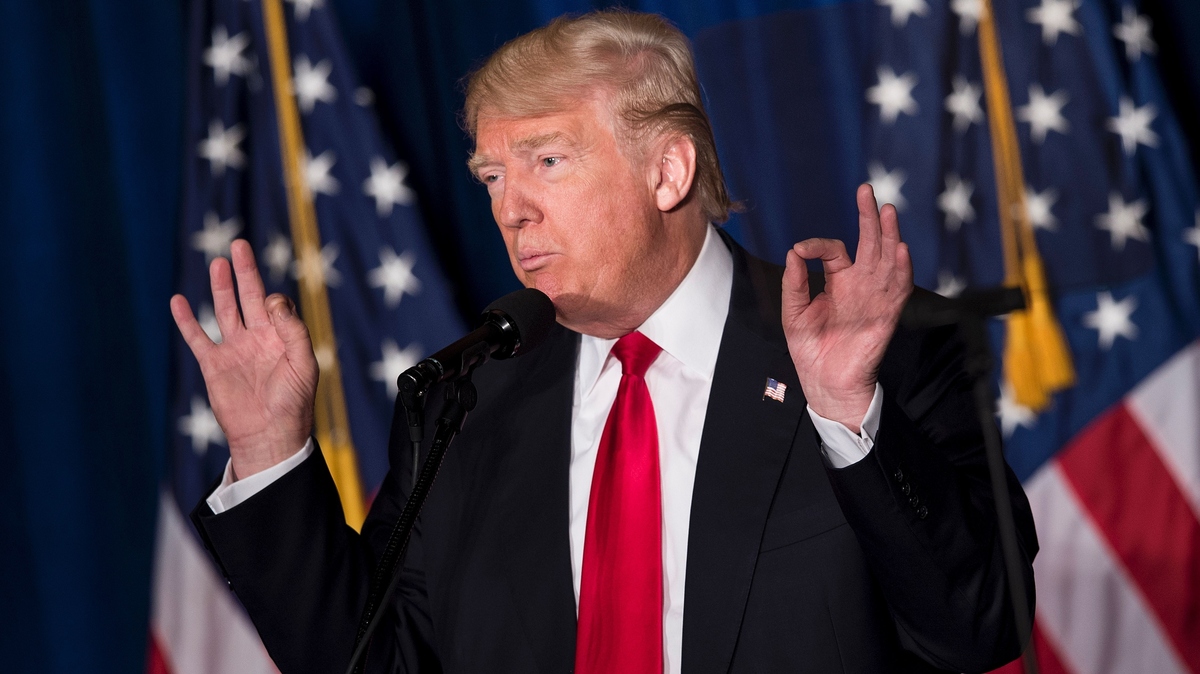 Trump says Clinton is playing the "woman card." But studies show it probably wouldn't help her beat him.

A five-primary victory on Tuesday night seemed to embolden Donald Trump Tuesday night. Taking questions after his victory speech, the Republican front-runner went after Hillary Clinton, his most likely opponent in November, on her gender.

"Well, I think the only card she has is the woman's card," he said. "She's got nothing else going on. And frankly, if Hillary Clinton were a man, I don't think she'd get 5 percent of the vote. The only thing she's got going is the women's vote. And the beautiful thing is that women don't like her, OK?"

Except, of course, Clinton clearly has more going than the women's vote. As the Washington Post's Phillip Bump showed on Wednesday morning, Clinton beat her opponent, Bernie Sanders, among men in 12 of 25 contests thus far.

After Tuesday's clean sweep for Trump and four-election win for Clinton, it's looking much more likely that the two will face off in November. That means there's lots of potential for Trump to make this and plenty of other gender-based attacks over the next six months.

So before that happens, let's look at whether the "woman card" exists — that is, the extent to which gender affects voting. In general elections, political scientists say, gender is just not that important. While gender may be playing into voters' primary choices, party allegiance trumps gender (pun intended) in general elections. And that would give Clinton an advantage, come November: Women vote Democratic.

A lot of the research on gender and voter preferences focuses on general, not primary, elections. But here's what we do know about this primary season: Clinton fares far better among women than Sanders does.

"I think the current presidential [election] demonstrates that surely there is something going on with gender affinity in the primary — the average gender gap (difference between men and women voters' support for winner) in Democratic primaries is around 11-12 points, while it's nearly half of that in the GOP primaries," wrote Rutgers University political scientist Kelly Dittmar in an email.

But then, people's reasons for voting are complicated. This doesn't mean women are voting for Clinton purely based on gender — for many women, it is a small consideration, and for still others, it's nonexistent.

Moreover, though we talk about the "women's vote" a lot in elections, women are not a monolith. In many states, millennial women have supported Sanders more, while older women, along with black women, have tended to support Clinton.

Different issues could be driving those different groups of women's votes. Sanders' tuition-free-college plan could be swaying younger women in his direction, and Clinton's heavy campaigning on gun control could also be swinging women and minorities, who tend to favor gun control, in her direction.

2. More important than the woman card: Clinton has the "Democrat card"

The general election will be a different story. The gulf between the Democratic and Republican candidates will be much wider than the distance between Clinton and Sanders.

And that gulf, political scientists say, will be what matters in November, should Clinton win the nomination (as looks likely).

"There isn't a lot of evidence that sex of voters matters very much in driving the vote choices people make," said Kathleen Dolan, professor and chair of the political science department at the University of Wisconsin, Madison.

"Women voters do tend to vote for women candidates, but it's because they share a party identification. ... There's no evidence that women cross party lines," she added.

Similarly, a new book from researchers at George Washington and American universities finds that gender has little overall influence on how candidates run, how media cover them, and how voters evaluate them. Rather, they likewise find that partisanship matters far more.

And lately, Democrats are far more successful among women. Democratic presidential candidates have consistently won the women's vote since 1992, according to data from Gallup.

Yes, there are exceptions — anecdotes about elderly women who just want to vote for a woman before they die.

But those are exceptions, not the norm. As Dittmar points out, in the 2008 general election, Clinton's former supporters in 2008 didn't suddenly find themselves conflicted when John McCain chose Sarah Palin as his running mate.

One place gender might show up: people without a party. This is the small share of voters — only around 12 percent — who are independent and don't lean toward any one side or the other. The women in that group could perhaps be more influenced by gender.

"I think that in a general election that's where the extent to which we'll know for sure how important this actually is. It's going to be independent women in battleground states," says Jennifer Lawless, a professor of government at American University.

But she doesn't think Clinton's gender alone would be a big factor in November.

"Are you going to be able to motivate independent women — especially those in battleground states — because is there going to be an additional push, an additional motivation to see the first female president?" she added. "That's not going to be the deciding factor for most people."

3. Trump will complicate all of this

A lot of that evidence deals in the abstract, though — the idea being that in general, voters make their minds up far more about party than gender.

But 2016 is no garden-variety election for a lot of reasons — one big one being a guy named Donald Trump. And because voters' views of him are so polarized, particularly when it comes to gender, that could throw a fair amount of this analysis out the window.

In a race with two major candidates, people can just as much vote against one candidate as for the other. And Trump's rhetoric toward women has been a major storyline in this election since Megyn Kelly first asked him at the first Fox News debate about his past disparaging comments about women (not to mention his subsequent disparagement of Kelly after that debate).

Since then, he has insulted then-GOP-candidate Carly Fiorina's looks, retweeted a meme making fun of Heidi Cruz's appearance, and called Clinton "shrill."

Even Wednesday morning after his five-state electoral sweep, when Trump was asked about his woman-card comments on MSNBC's Morning Joe, he responded with what many would construe as a sexist comment — followed by pre-emptively shrugging off any charges of sexism.

"I haven't quite recovered — it's early in the morning — from her shouting that message," he said. "And I know a lot of people would say you can't say that about a woman because of course a woman doesn't shout."

To the degree that that rhetoric turns women voters off, Lawless says, it could make this a much easier election for Democrats. It won't flip many hardcore Republican female voters, but it could energize turnout on the Democratic side and potentially push some of those independent women his direction.

"In a Trump/Clinton match-up, I think there's a chance that we'll see a gender gap of a larger magnitude than usual," Lawless writes in an email. "Trump's sexist rhetoric and abrasive style probably make gender more salient to voters — especially women — than would otherwise be the case."

That gender gap between Trump and Clinton already shows up in polls. In an April Purple Strategies/Bloomberg poll, Clinton beat Trump among married women by 12 points. That's usually a friendlier crowd toward Republicans: Mitt Romney won that demographic by 7 points in 2012.