Accessibility links
One Last Push In Congress To Change Punishment For Drug Crimes This Year A bipartisan group of senators has spent three years hashing out a proposal to reduce mandatory minimum prison terms for many nonviolent crimes. 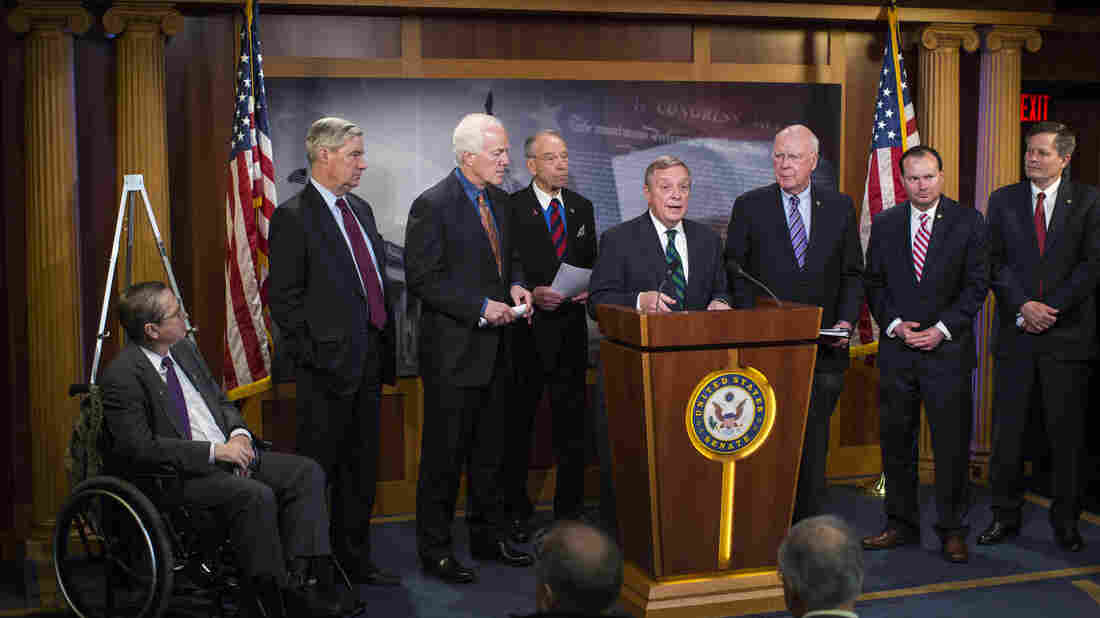 "This is the best chance in a generation to reform our federal drug sentencing law," Sen. Richard Durbin (center) said Thursday. He and other lawmakers held a news conference about proposed criminal sentencing reform legislation. Al Drago/CQ-Roll Call,Inc. hide caption 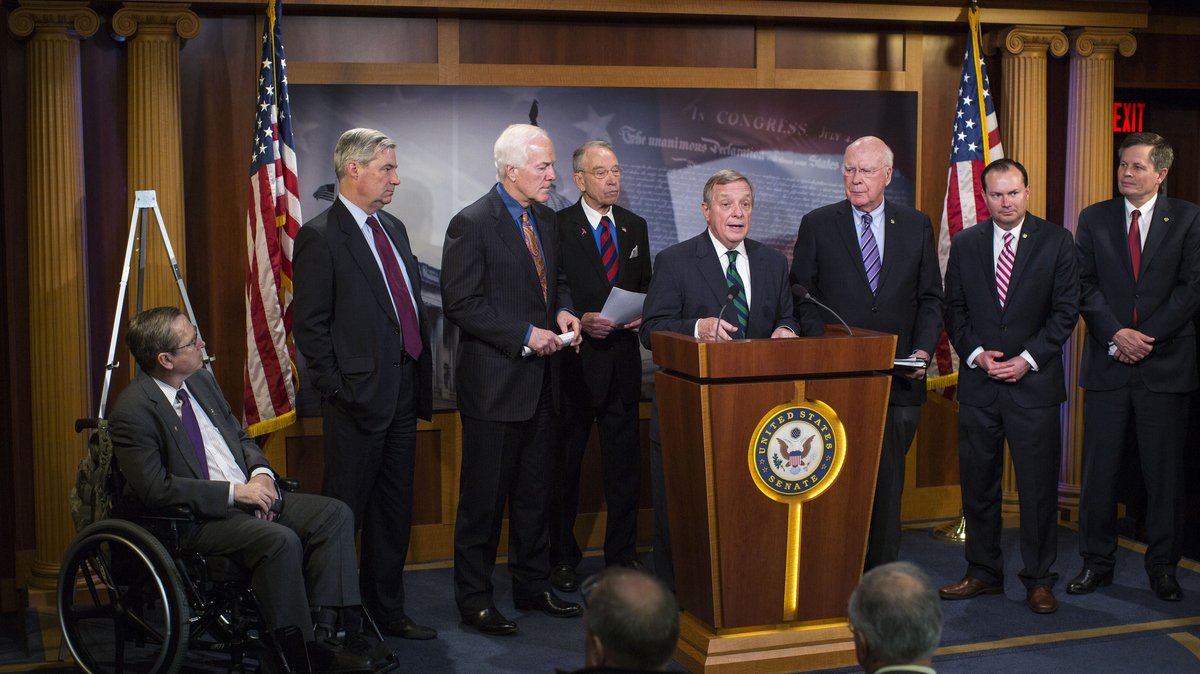 "This is the best chance in a generation to reform our federal drug sentencing law," Sen. Richard Durbin (center) said Thursday. He and other lawmakers held a news conference about proposed criminal sentencing reform legislation.

A bipartisan group of senators has unveiled a new compromise plan to overhaul the way drug criminals are punished, making one last push for legislative reform before the presidential election all but forecloses action on Capitol Hill.

At a news conference Thursday, one of the plan's biggest supporters, Sen. Richard Durbin, D-Ill., proclaimed, "This is the best chance in a generation to reform our federal drug sentencing law."

Lawmakers have spent three years hashing out proposals to devote federal prison space to the inmates who most need incarceration. The Justice Department has warned the budget for U.S. prisons threatens to overtake spending for premiere law enforcement agencies including the FBI and the DEA. Last year, the Senate Judiciary Committee approved a plan to give judges more sentencing discretion and to reduce some mandatory penalties for drug crimes by a vote of 15 to 5.

But prominent Republicans, including Sens. Tom Cotton of Arkansas and Jeff Sessions of Alabama, raised the specter that prison doors would open for violent offenders, only to see them return to a life of crime.

In response to those fears, the idea's Senate supporters went back to the drawing board. Now gone from the plan are measures that would have lowered the mandatory minimum sentences for people convicted of certain firearms offenses, according to the Washington D.C.-based Sentencing Project. The compromise bill adds new mandatory minimum penalties for fentanyl, which has been linked to overdose deaths across many parts of the country.

Those changes helped turn the tide for the National District Attorneys Association, the largest group of prosecutors in the nation, which this week threw its support behind the legislation.

The association wrote a letter of praise to bill sponsors, concluding "the latest version of the bill strikes the appropriate balance between targeting the highest level drug traffickers plaguing our communities, while simultaneously decreasing crime rates and addressing the burgeoning prison population."

More far-reaching changes in states such as Texas, Georgia and North Carolina have demonstrated that lighter sentences for many nonviolent criminals would not jeopardize public safety, Sen. John Cornyn, R-Texas, pointed out at the news conference.

The chairman of the Judiciary Committee, Iowa Republican Charles Grassley, said he soon would begin conversations with the majority leader about scheduling time for the full Senate to debate the bill, which is now sponsored by 37 lawmakers. Senate floor time is scarce this year in part because of summer recess and the upcoming presidential election.

House Speaker Paul Ryan, R-Wis., has said he wants to move justice overhaul plans this year. But what should be included in the bills, and what should be left out, is not so simple.

House Republicans have said they will not move a plan to lighten penalties for drug criminals without language that would raise the burden for prosecutors in proving criminal intent in some environmental and business cases.

That's a deal-breaker for the Justice Department and some Democrats. The Senate largely avoided the issue in its plan — and the reasons were on full display in the Capitol.

"The idea that to this good effort we're going to attach an effort that basically gives corporations carte blanche to violate laws that have been set up to protect the public simply because it's hard to prove the state of mind of a corporate defendant, that is asking an awful lot," Whitehouse said.

His Republican colleague from Texas, Sen. Cornyn, chimed in: "Like I said, 'no consensus.' "