Accessibility links
Book Review: 'The Star-Touched Queen' By Roshani Chokshi Roshani Chokshi's smooth and assured debut draws on folk and fairy tales — Bluebeard, Persephone, Beauty and the Beast — for the story of a young girl whose ominous horoscope sends her on a journey. 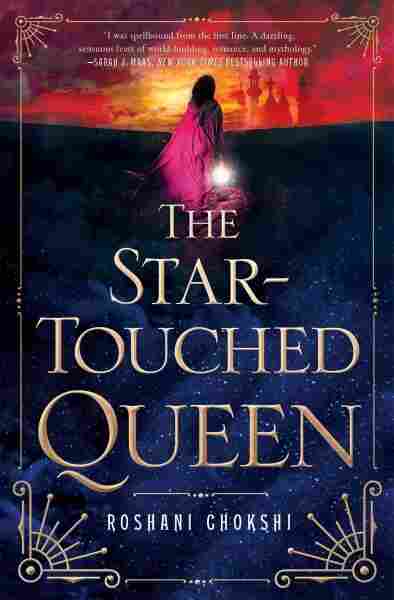 In the kingdom of Bharata, horoscopes mean a great deal. The story the stars tell of your life is an immutable truth that will govern your interaction with the world. But Mayavati's horoscope is terrifying: It declares her to be married to death and destruction, such that her father's wives shun and blame her for every misfortune. With war looming at Bharata's borders, Maya's ill-starred horoscope casts an increasing shadow; though she'd rather live a quiet, retired life of the mind, a politically expedient marriage seems like the only thing that can save her kingdom.

Dire circumstances lead to her marrying Amar of Akaran — a mysterious man from a mysterious kingdom, both seemingly spun from the stories Maya tells her younger sister, Gauri, about naga and apsara and the Night Bazaar. His devotion to her seems at odds with the taboos governing her life in Akaran, and it isn't long before Maya's constant picking at the stray threads in his narrative makes the whole come apart, revealing far more than was ever dreamt of in her philosophy.

The sentence-level beauty of this book often stunned me: There's a smooth, understated loveliness to the writing that kept catching me off guard. In Chokshi's prose, voices have substance and texture while light has color and flavor; never have I wanted to munch on books so much as after reading "The archives were cut like honeycombs and golden light clung to them, dousing every tome, painting, treatise and poem the soft gold of ghee freshly skimmed from boiling butter."

Also understated is the quality of Maya's observation in the first quarter of the book; I enjoyed her perspective most when it was engaged in sketching the court in which she lived, her careful interactions with the other women in her father's harem, and her sneaking into the rafters above her father's inner sanctum to watch "the way power settles over people in a room, the way language curls around ankles like a sated cat."

The sentence-level beauty of this book often stunned me: There's a smooth, understated loveliness to the writing that kept catching me off guard.

Unfortunately for me, the book was less interested in these aspects than I was, and cast them off relatively quickly in favor of pursuing a very enjoyable — but far more typical — romance narrative at the crossroads between a few different stock tale types, growing its tension from the uncertainty of which story-path it would pursue. It's a captivity narrative — but is it more Hades and Persephone, or Beauty and the Beast? It's a story about taboo-breaking — but is it more Bluebeard or the Black Bull of Norroway?

Tale-telling is very much at the core of this book, and people are often being asked to make narrative decisions about themselves and others. Your horoscope's words may be cast in stone, but how do you interpret them? Given the choice between two equally terrible outcomes, how will you determine which is best? Over and over, The Star-Touched Queen raises questions about who and how to trust, how and why to act, and if I wasn't always satisfied by the answers, I nevertheless appreciated the exercise.

While it's difficult not to be disappointed by the book's second-half shift away from real relationships with clear and present stakes to the shadows of past relationships in former lives, it's a disappointment experienced mostly in retrospect; Chokshi's beautiful writing and lovingly detailed setting kept me invested in every page, even while I remained far more interested in Maya's relationship with her sister than in the strange beauties of Akaran. I wanted, ultimately, more of the Maya we see in the book's first few chapters — curious, thoughtful, loving, brave — than the Maya we see later on: unravelling the mystery of who she "really" is, by which the book means "in relation to a man."

I certainly don't deny the lasting appeal of stories where a powerful, shadowy man is entirely, helplessly devoted to the female protagonist and her own innocent mystique — it's just been done so much more often than stories centred around women's relationships to each other that I can't help but hold it to a higher standard.

Those quibbles aside, there's a great deal to praise and enjoy in The Star-Touched Queen. Solidly crafted and very engaging, this is a smooth, lovely and assured debut.