Accessibility links
In 'Long War,' Iraq And Afghanistan Vets And Refugees Tell Their Stories A new play called Voices From the Long War tells the stories of veterans from the Iraq and Afghanistan wars and refugees from those countries. The actors are those vets and refugees. 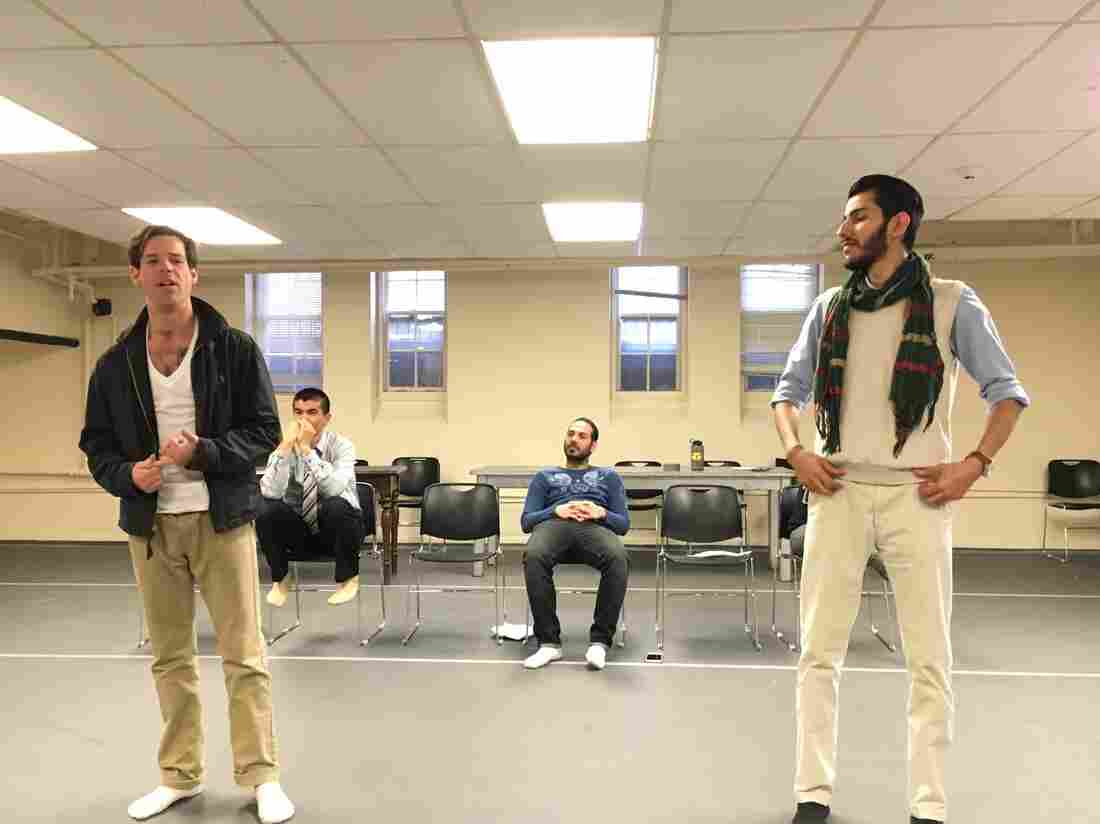 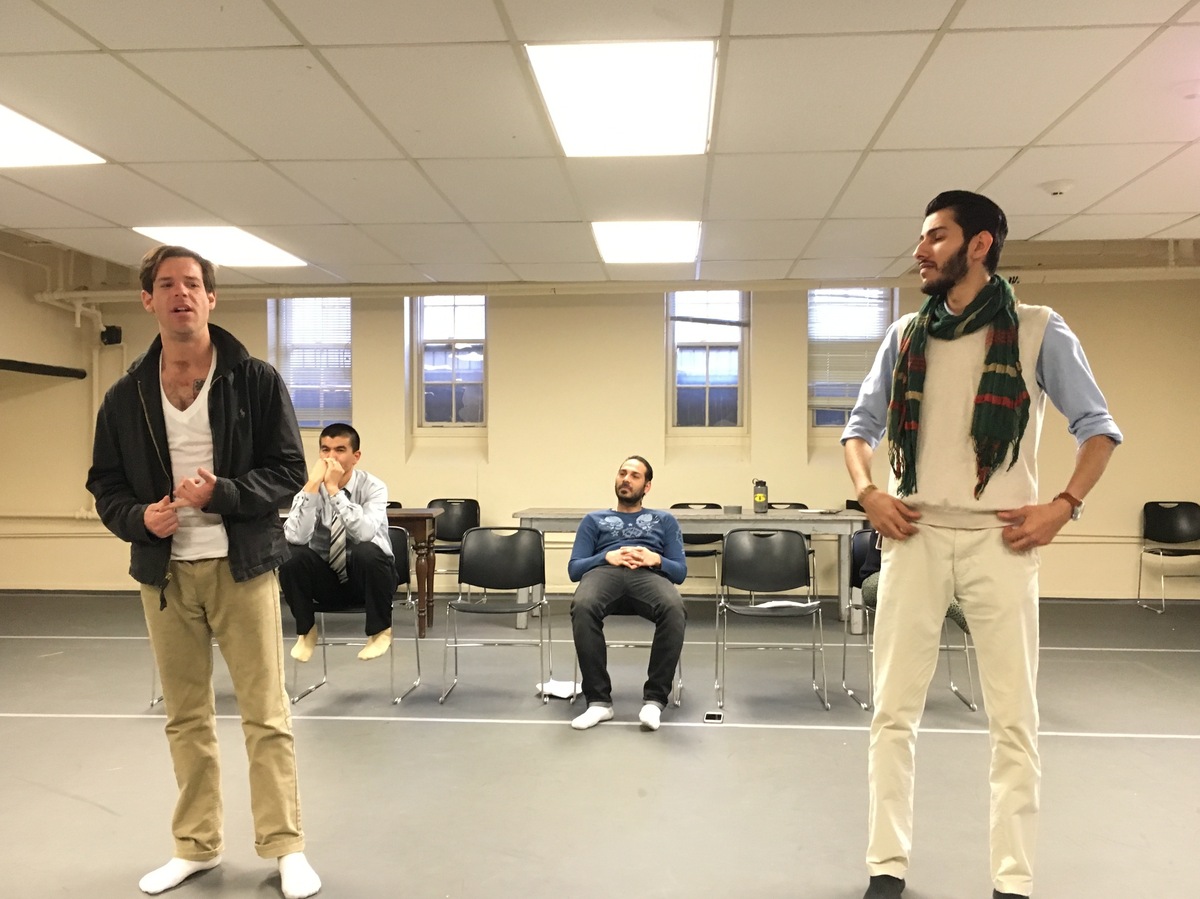 Former Marine Tom Burke (left) and Maher Mahmood, an Iraqi refugee, rehearse for the play Voices From the Long War at the Yale Cabaret building on the Yale campus.

It's two weeks before opening night and the cast is rehearsing for already sold out performances in a building on the Yale campus in downtown New Haven, Conn. The play is called, Voices From the Long War. And its cast is as unlikely as one could imagine — veterans of the Iraq and Afghanistan wars and refugees from those countries.

They're bringing their own personal experiences from during and after the war to life on the stage. They hope through these stories to dispel some misconceptions about who they are.

Kevin Hourigan is the director of Voices From the Long War and he's asking cast members about their performances so far.

Saadi makes time for rehearsals before he begins his overnight shift at an Amazon warehouse. It's not a job he ever expected to hold; he speaks several languages and he graduated from school in Italy to become an officer in the Iraqi navy. After the war began, he was hired as an interpreter for the U.S military.

Then, as he says in the play, this happened:

The Constitution that I fought for was the one where people can come from anywhere in the world and make themselves a better life.

"The people started shouting spies, spies, spies, why are you working for the Americans? When they stopped us, they shot my friend in front of me. And his blood was all over my face. And they told me that's a message for you. If you don't quit, you're next."

Saadi fled Iraq but couldn't bring his family with him. His wife was pregnant at the time and he says his only contact with his now 2-year-old son has been through Skype.

"Whenever he see me on Skype he is like 'who is this?' And my wife tells him 'That's your father.' And he says 'No.' He thinks I'm dead."

The personal stories of three refugees and three veterans make up the entire script. The idea came from Tom Berry. He was an Infantry officer in both Iraq and Afghanistan and is now a Yale graduate student. He remembers walking by the university's war memorial, inscribed with the names of alumni who died while serving their country.

"The legacy is not just with us, the veterans,' he says. "It's with those communities that got drawn in sometimes willingly, sometimes unwillingly."

Berry contacted the Telling Project. Since 2008, the nonprofit has been talking to veterans and their families and then writing scripts around their stories that they — not actors — perform on stage.

Telling Project founder Jonathan Wei says this is the first time his group has combined the stories of veterans and refugees.

"We do have these conceptions of soldier and refugee and when it comes down to it conceptions are always going to fall short," he says. 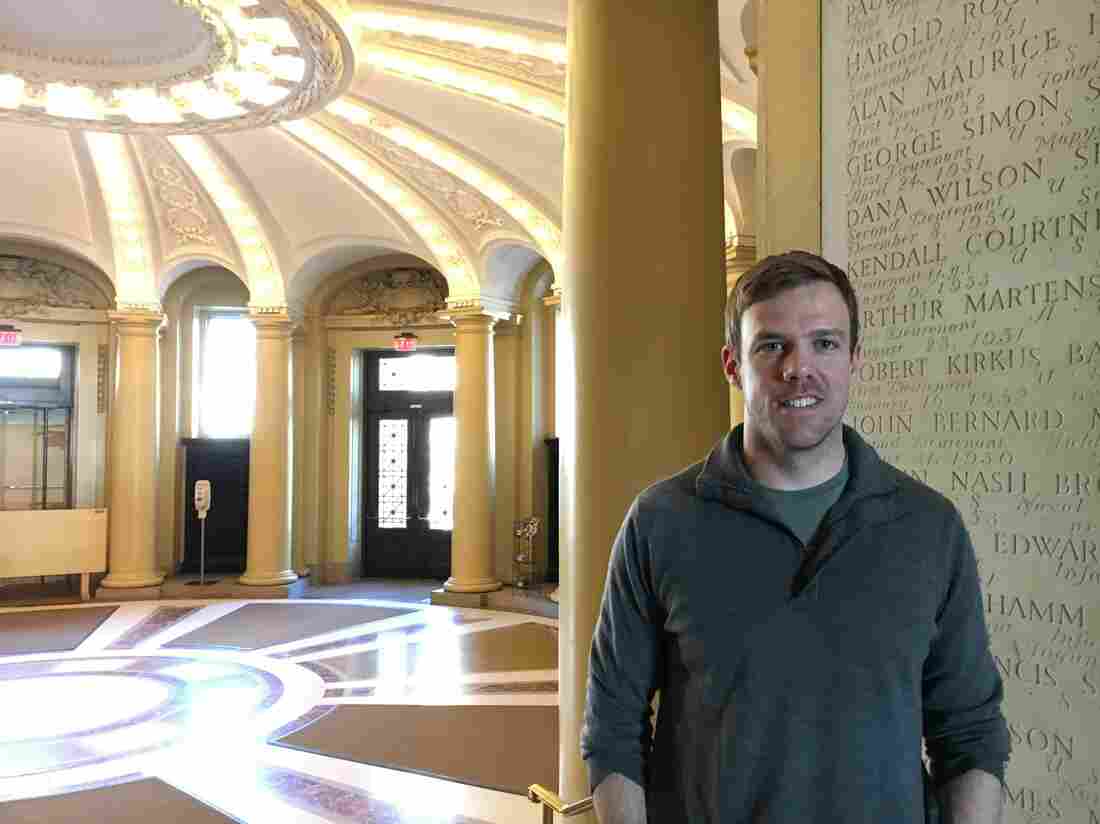 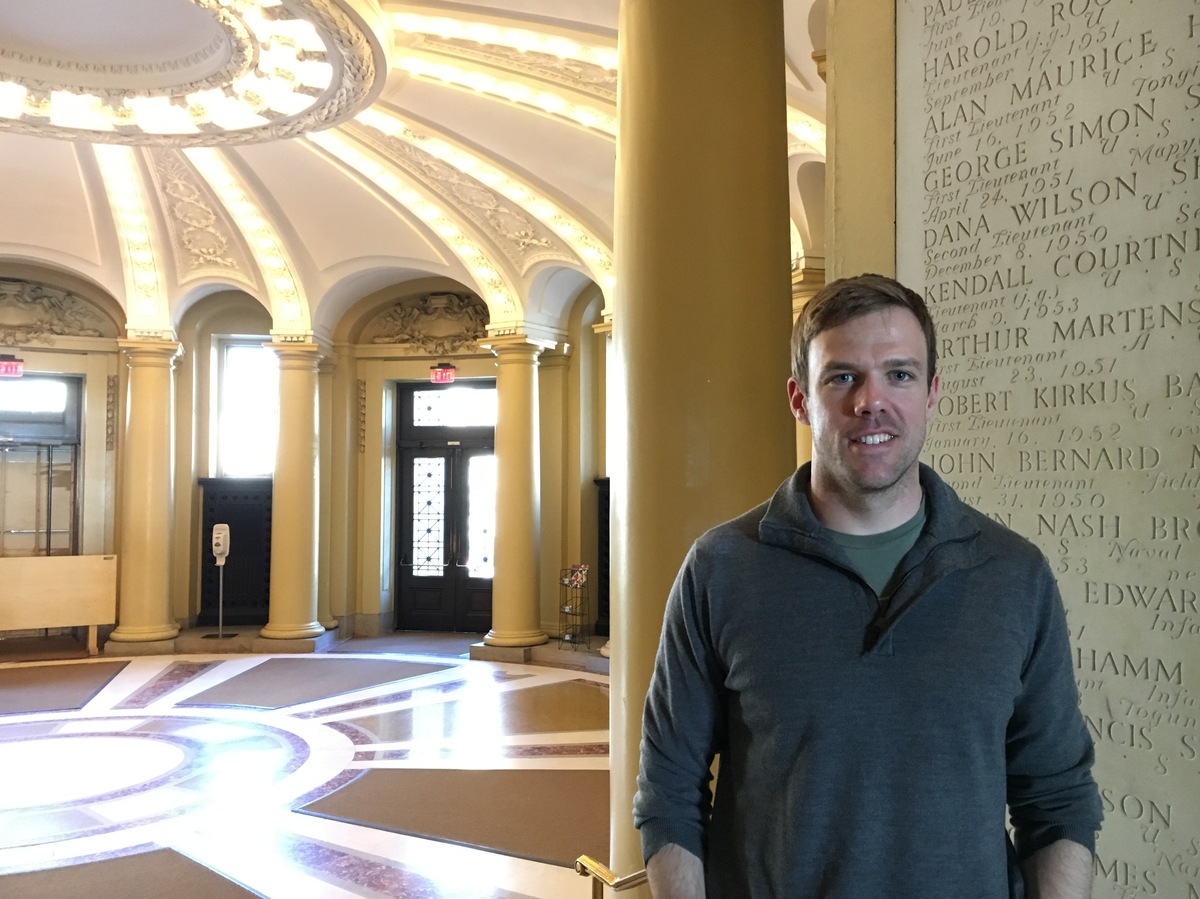 Tom Berry, executive producer of the play Voices From the Long War, stands by the war memorial in Woolsey Hall at Yale University.

Wei and his staff will usually first record the interviews with people who agree to participate and then turn their exact words into a script.

In his interview, Iraqi cast member Maher Mahmood remembers being 14 years old and playing with binoculars when an American soldier ran up to him.

"I was very afraid ... I believe he said why you do this, we almost shoot you. Some of the kids run. Imagine if I run, they will shoot me. But I didn't run. I sit in the ground and he was talking to me, why you do this, he scream I almost killed you. I didn't say nothing. ..." Mahmood says.

When he got older, Mahmood worked for a U.S contractor, but that job led to death threats and an assassination attempt on his father. Two years ago, his family came to the U.S and the 22-year-old says Americans didn't really get his story.

Getting people to understand is the point, says fellow cast member and former Marine, Tom Burke.

"The Constitution that I fought for was the one where people can come from anywhere in the world and make themselves a better life," Burke says. "And so, I think that especially listening to somebody like Asadullah's or Ali's or Maher's story, you hear that that's the true American story. They're working as hard as they can to really make their lives better and I think that Americans have a lot to learn from that sort of American ethos."

The cast hopes after the curtain closes on the show, similar plays can be staged in other cities and towns so more people can understand what it means to be a veteran or a refugee.