Accessibility links
Attorney General Loretta Lynch Touts Training To Help Inmates Build A Bridge To The Outside World Loretta Lynch made her first visit to a federal prison as the nation's top law enforcement officer. She highlighted the need for more services to help inmates re-enter society. 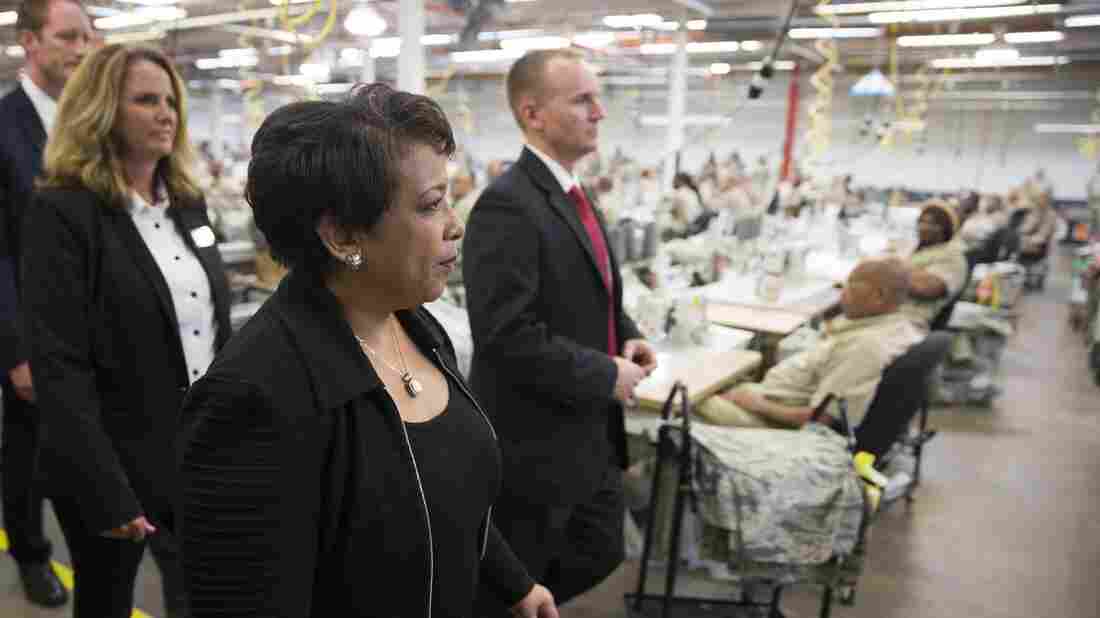 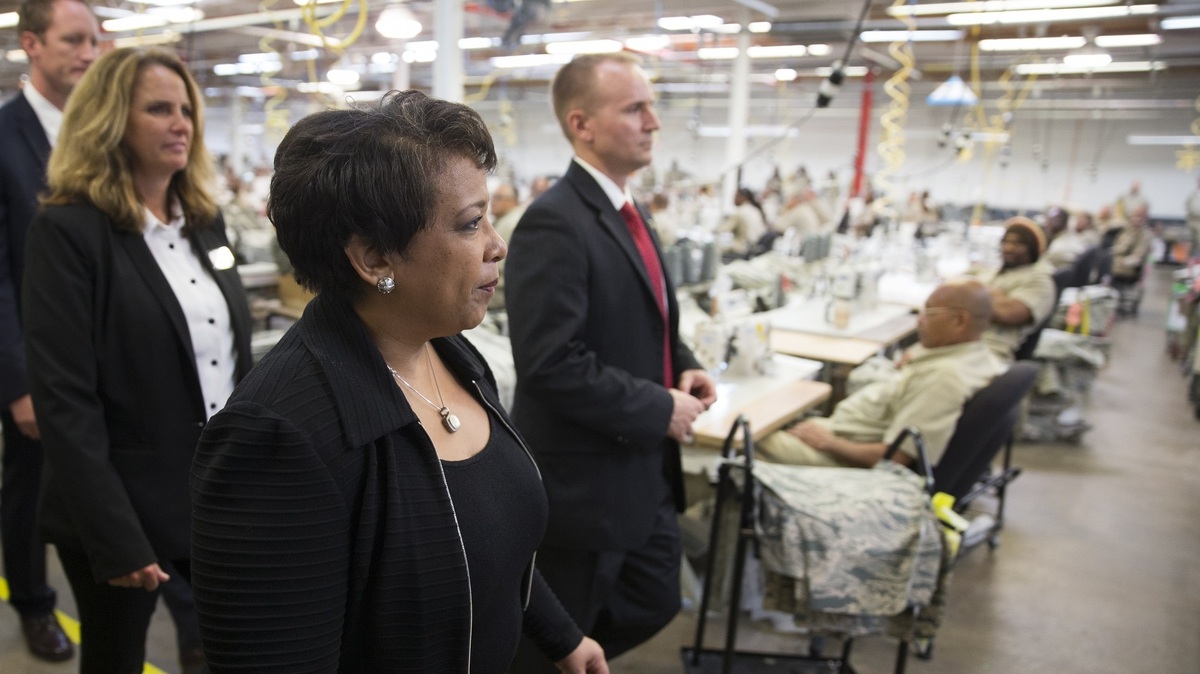 Attorney General Loretta Lynch tours a factory where inmates work at the Talladega Federal Correctional Institution in Talladega, Ala. on April 29, 2016.

The nation's top law enforcement officer walked past a barbed-wire fence, through passages lined with rust-colored walls, to meet with a special audience. But this was not a normal meet-and-greet — a stern-looking FBI security detail tracked her every move.

Inside the visitation room in this federal correctional institution, five men in khaki uniforms and black Crocs slippers were waiting to give Attorney General Loretta Lynch a glimpse of their struggles.

"Just because we're locked up doesn't make us bad people," says Tony Moses, 47, a self-assured, tall man who's locked up until January 2041 on armed robbery charges. "We just made some bad choices."

Attorney General Lynch made the trip to highlight the need for more programs to help inmates transition out of incarceration and re-enter society. She mixed, carefully, with the general population at this federal correctional facility where 42 percent of inmates are locked up for drug crimes and 33 percent are facing years behind bars for weapons offenses.

"Certainly by providing individuals coming out of institutions with ways to become productive citizens, we reduce recidivism," Lynch tells NPR in an interview. "What that means is we reduce crime. There are fewer victims when individuals have options — when they have job skills, when they have life skills, we break the cycle of children following their parents into institutions."

Elsewhere on the sprawling prison campus, past a group of inmates who wear hair and beard nets while roasting a barbecue lunch, Lynch was greeted in the sky-lit chapel by 96 prisoners undergoing drug abuse treatment.

It's not your father's prison unit. One inmate made an announcement about weigh-in for their "biggest loser" health competition. Another confessed he was shaking off feelings of aloofness after refusing to dance with the group earlier in the week. Talladega prison's 9-month drug rehabilitation and work-training program is a big draw here and in other prison facilities. 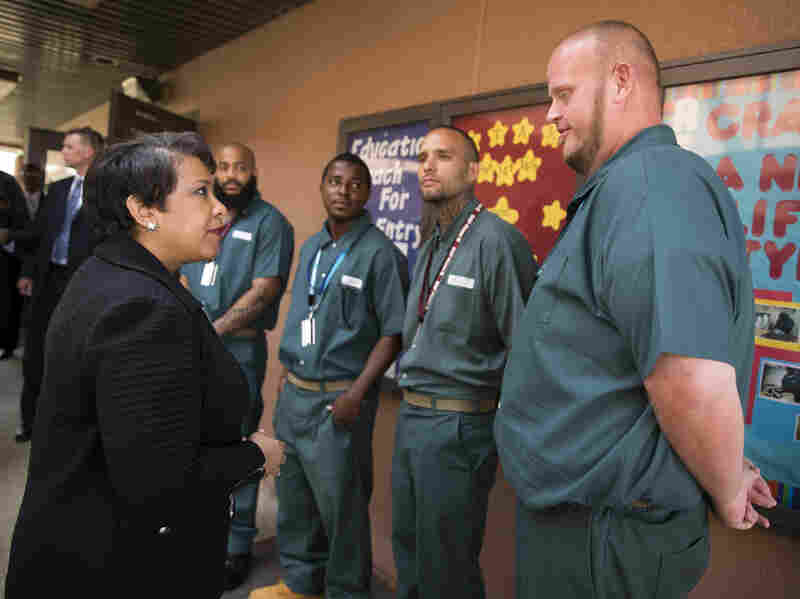 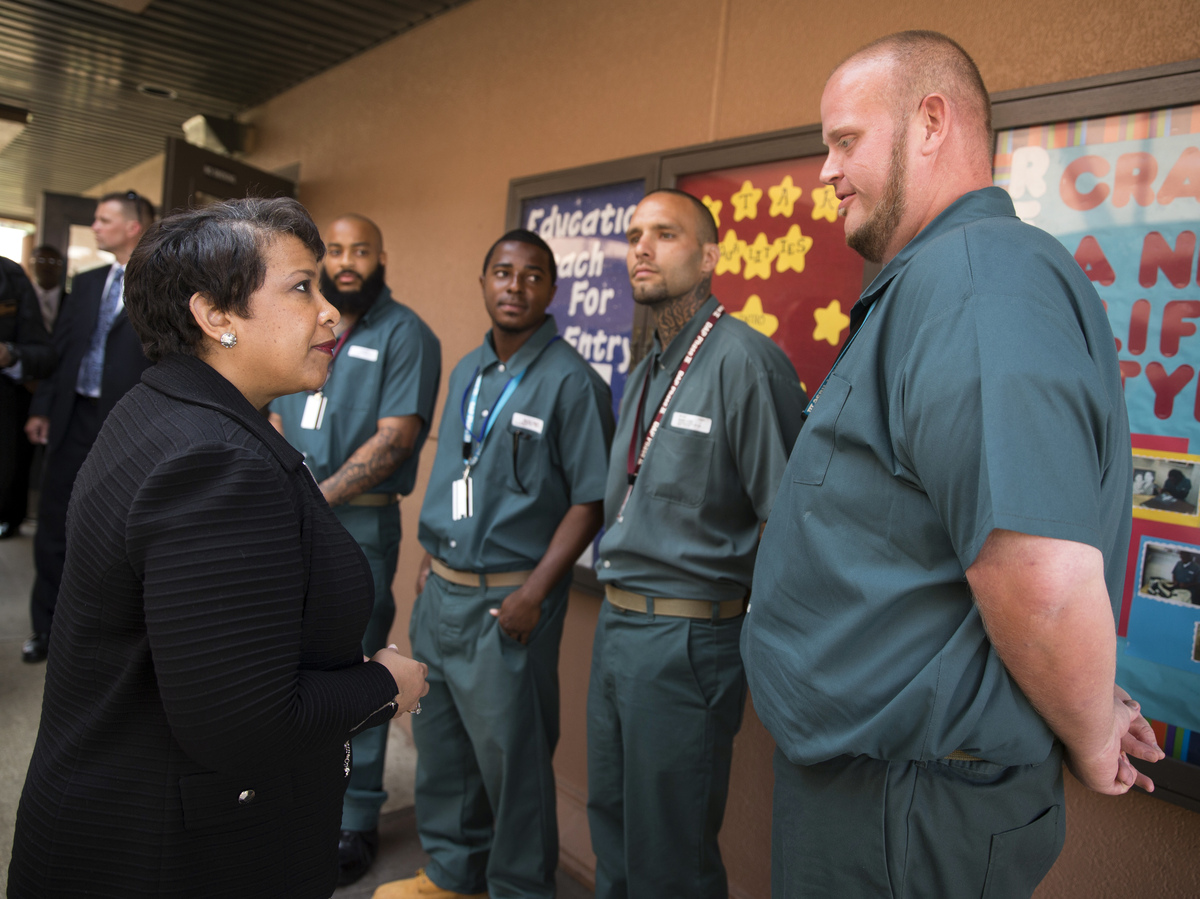 Derek Spinks, 36, who pleaded guilty to helping steal $4 million from Bank of New York Mellon, and who was handpicked to meet with the attorney general, explained why. "You wouldn't get this help on the street," Spinks says. "It saves lives. ... I think the program should be offered to all inmates in federal prison."

For now though, prison officials say there are no plans to expand the drug treatment offerings. Rather, they're using scarce resources to develop more programs for women behind bars — and trying to shore up the struggling prison industries unit known as UNICOR.

In Talladega, about 290 men in the UNICOR unit stop their work sewing camouflage pants for military uniforms to gawk at the visitors from Washington. Superintendent of Industries Carrie Thorson tells the attorney general 80 percent of these men never had a legal job before this factory work. They earn, on average, $250 a month. And their rates of misconduct in prison are lower, Thorson adds.

"These guys don't have misconduct in that they know if they screw up they're done ... they're terminated immediately," she says.

Clarence Aaron spent 22 years rising to top jobs at UNICOR in Talladega and other prisons before he won clemency from President Obama in 2013. He's now living in Mobile, trying to find a job that suits his business studies and his lengthy experience in an office. So far, Aaron says, the best offer he's received involves emptying trash cans, in "custodial maintenance."

Prisons give inmates training, he says, but there's not much of a bridge between them and the world outside. "I'm trying to do my best," he says, his voice breaking with emotion. "I'm not asking nobody to give me nothing, I want to earn everything I get. It's just about an opportunity."

Attorney General Lynch, who met privately with Aaron in a short visit to Mobile, seemed to agree, telling NPR he made an "excellent point."

Lynch adds: "We're now going to work to make sure there's a bridge from the institution back home, not just for the individual, but for the skills that they've gained."

Attorney General Lynch gave a wide-ranging interview to NPR as she marked her first full year on the job. Here are some other topics she discussed.

Voting rights, as cases in Texas and North Carolina work through the courts

Certainly in a larger sense, supporting every individual's right to vote is of great importance to the Department of Justice and to me as the attorney general. Voting is how we participate in a civic society — be it for president, be it for a municipal election. It's the way we teach our children — in school elections — how to be citizens, and the importance of their voice. And I'm committed as AG to doing everything we can to ensure we keep the road to the ballot box unimpeded and open for all Americans.

Civic unrest and police actions in Baltimore, where she intends to return for a visit later this year

It's an ongoing process. It was obviously disturbing not just for me but for the people who live there in Baltimore. ... We have have to listen to the pain behind that process and find ways that we can be responsive to that.

With respect to Chapo, we have an excellent relationship with the Mexican attorney general's office and they've been incredibly responsive to our extradition paperwork. We're hopeful we will soon see movement there and I thank them very much and appreciate their efforts in that case.

On remarks by Jane Sanders, wife of Bernie Sanders, that "it would be nice" if the FBI sped up its investigation of Hillary Clinton's email setup

We don't talk about the timing of open matters but I certainly agree with the FBI director that in every investigation no matter whom it involves, we are thorough, we are fair, we are efficient, and we move through the facts and the evidence and come to the conclusions that are called upon. I would agree with the FBI director that our goal is to be thorough because we want to make sure that in fact we have looked at everything we need to look at before we come to any final conclusions, whichever way.