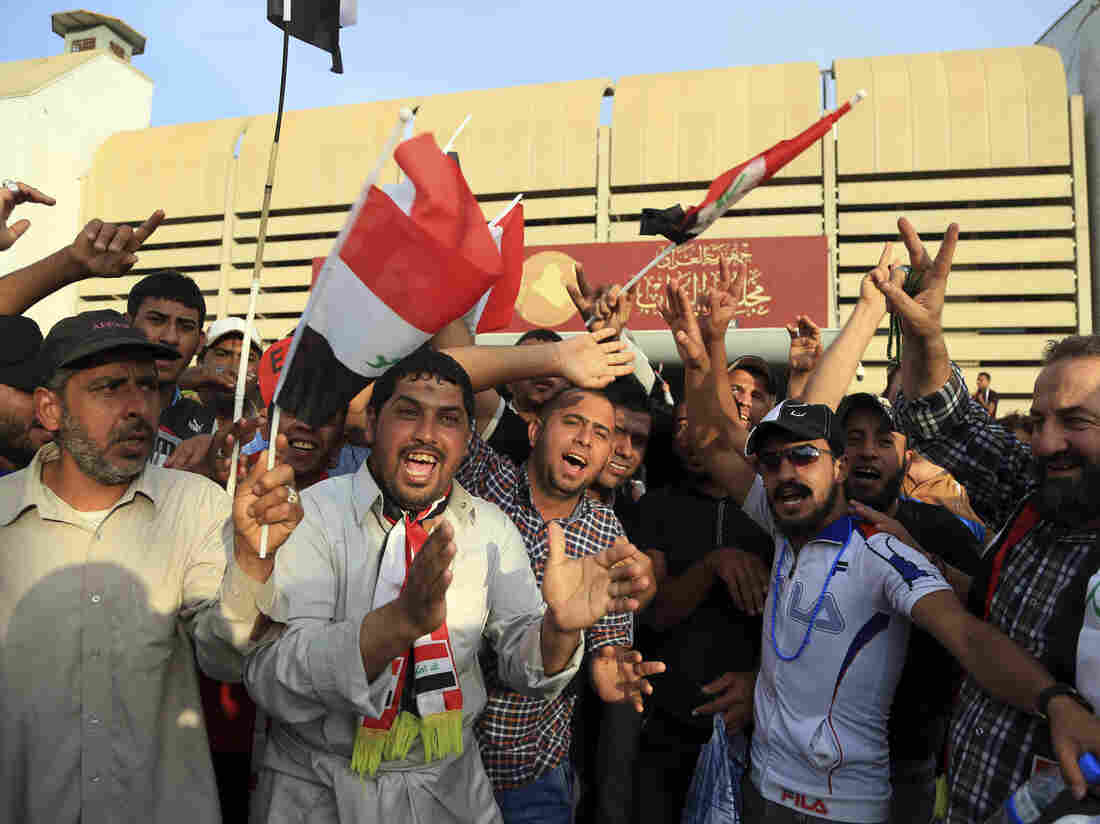 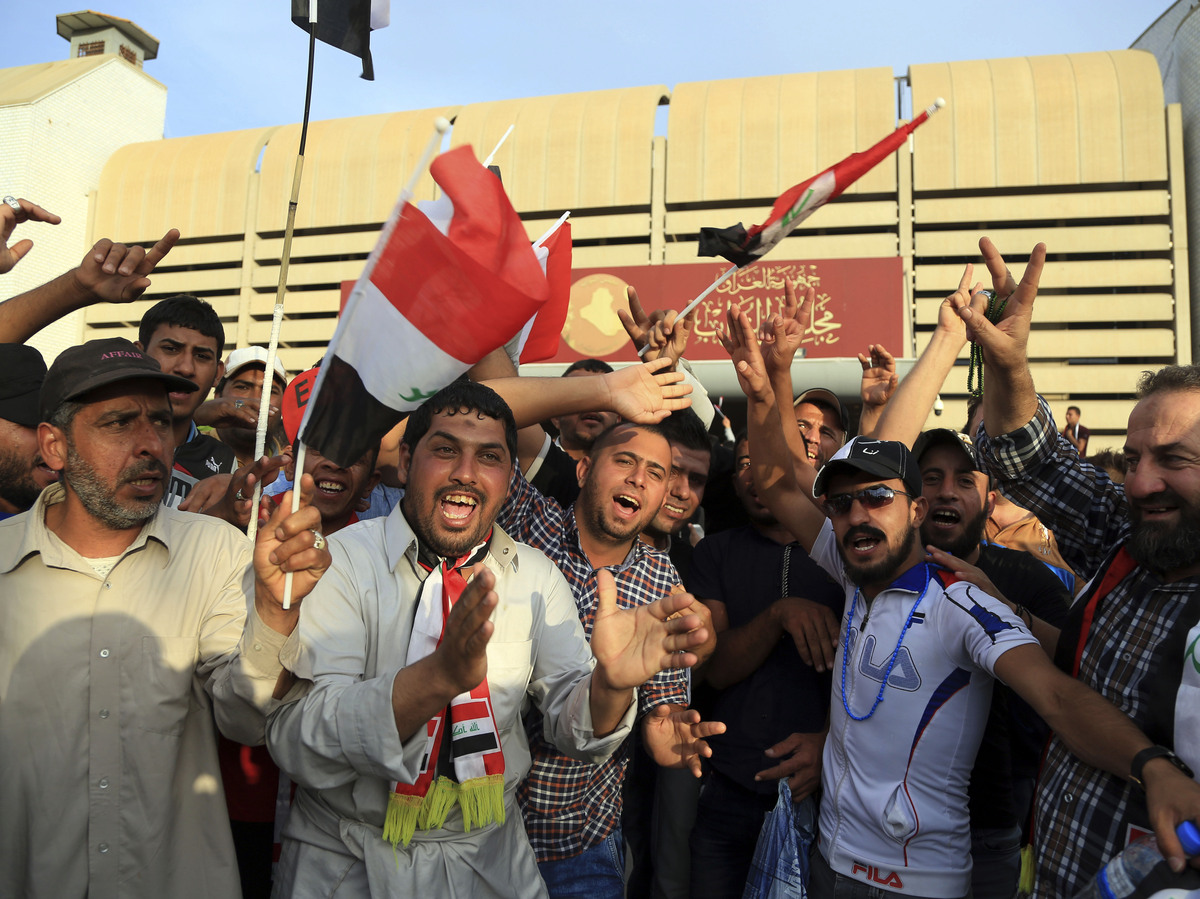 Supporters of Shiite cleric Muqtada al-Sadr raise the Iraqi flags outside parliament in Baghdad's Green Zone on Saturday. Protesters climbed over the blast walls and stormed the Parliament building.

A state of emergency was declared in Baghdad on Saturday after thousands of protesters loyal to Shiite cleric Muqtada al-Sadr tore down the walls of the highly fortified Green Zone and stormed parliament, the Associated Press reports. About a dozen people were wounded, police sources said.

In addition to government buildings, the Green Zone houses the United Nations Assistance Mission for Iraq (UNAMI) and various foreign embassies, including the American one — the largest U.S. embassy in the world. A United Nations spokesman and Western diplomats said their compounds inside the Green Zone were locked down, while a U.S. embassy spokesman denied reports of evacuation.

The AP is also reporting that Iraqi security forces fired tear gas on protesters at one of the entrances to the Green Zone as they continued to stream into government compound. 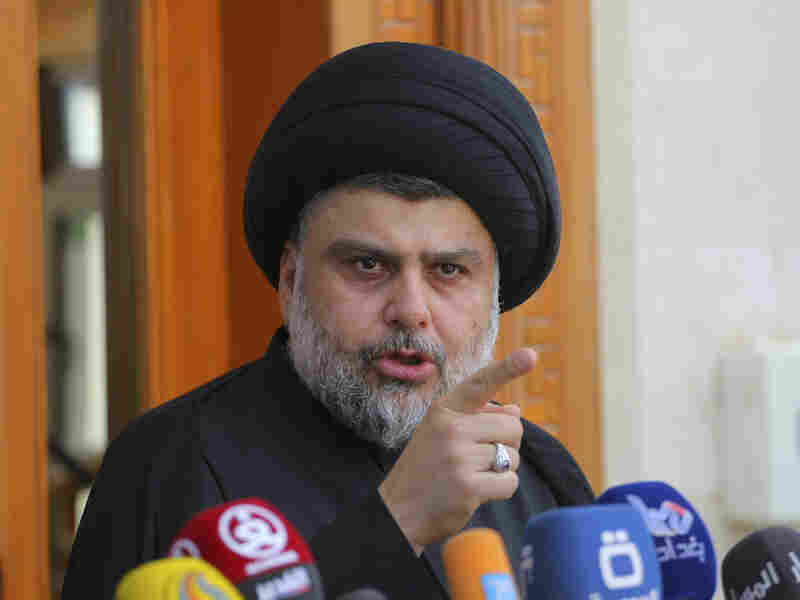 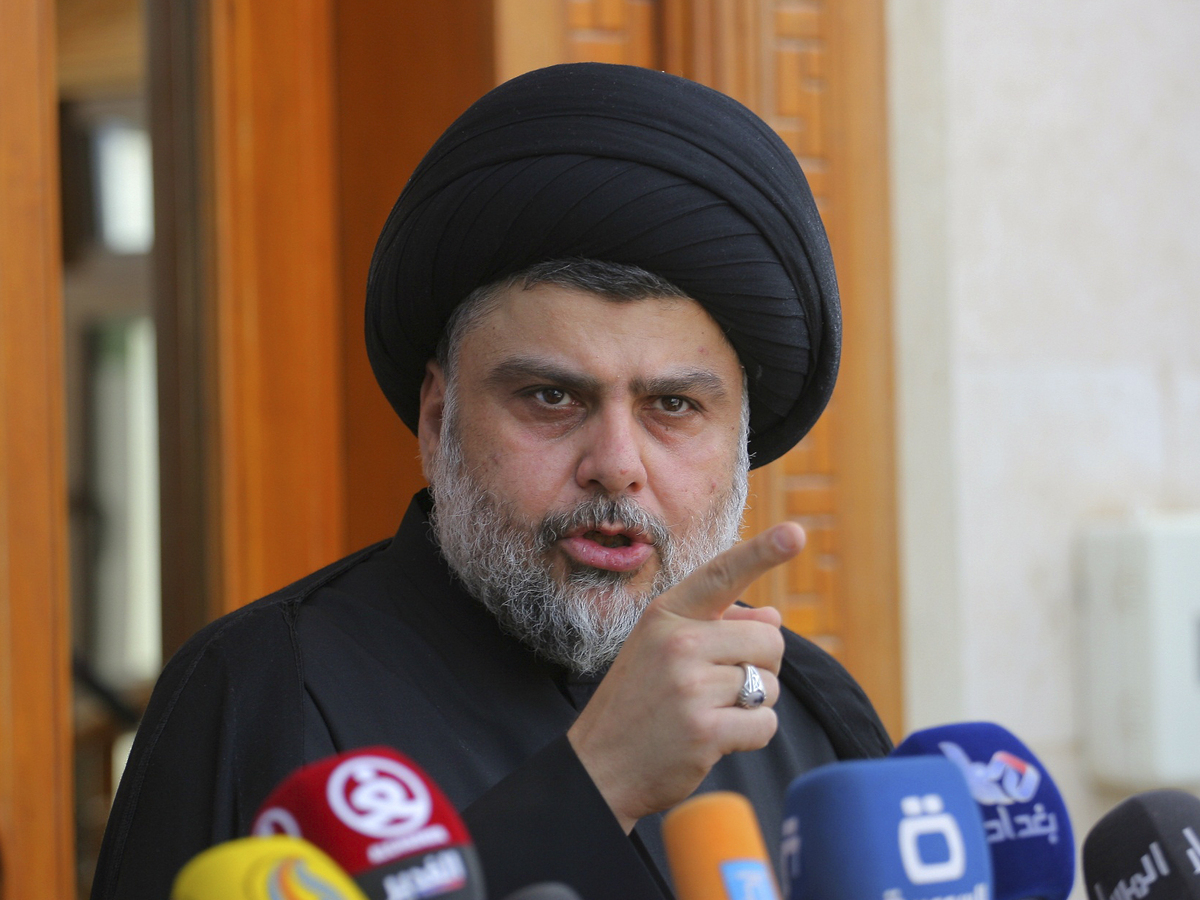 Shiite cleric Muqtada al-Sadr speaks during a media conference in Najaf, Iraq. Dozens of his supporters stormed the heavily fortified Green Zone in Baghdad on Saturday.

The unrest is the latest incident following weeks of political turmoil as demonstrators protested attempts by Prime Minister Haider al-Abadi to overhaul the Iraqi government by replacing party-affiliated ministers with technocrats.

According to Reuters, on Saturday, Sadr denounced the failure of members of parliament to reform a political quota system blamed for rampant corruption. Sadr has long been calling for wide-ranging political reforms.

Many of the protesters who climbed over the blast walls surrounding the Green Zone could be seen carrying Iraqi flags and chanting against the government: "The cowards ran away!"

Iraqi security personnel and Sadr's militiamen formed a joint force to control protesters' movement, a source in Sadr's office told Reuters. Most protesters had evacuated parliament and some were preparing for a sit-in in its courtyard, he added.

An army special forces unit with armoured vehicles was dispatched to protect sensitive sites, two security officials said, but no curfew had been imposed.

All entrances of Baghdad were shut "as a precautionary measure to maintain the capital's security," another security official said.

The U.N. mission to Iraq says it is "gravely concerned" and issued a statement condemning violence against elected officials and urging "calm, restraint and respect for Iraq's constitutional institutions at this crucial juncture."

The unrest began after Sadr held a news conference in the holy Shia city of Najaf and condemned the political deadlock. He threatened last month that his supporters would storm the green zone, but he did not order them to enter the area in his address on Saturday.

He said the politicians "refused to end corruption and refused to end quotas", adding that he and his supporters would not participate in "any political process in which there are any type ... of political party quotas".

Reuters also reports that in addition to tear gas, bullets were fired into the air in an effort to stop more protesters from entering the Green Zone. The report added: "As night fell, demonstrators set up tents at a nearby parade ground under triumphal arches made from crossed swords held by hands modelled on those of Saddam Hussein, who was toppled by the U.S.-led invasion in 2003."