Accessibility links
Paid Family Leave A Big Concern, Not A Top Campaign Issue After Nancy Glynn got pregnant, she learned her employer didn't offer paid family leave. Then, like many Americans, she discovered it was hard to get by without it.

Nancy Glynn, 27, called it her "NICU diet," but it wasn't about weight loss. It was about financial survival.

When her son, Hunter, was born two months premature, he was 2 pounds, 10 ounces and fighting for his life. Hunter was in the neonatal intensive care unit, or NICU, for more than a month. 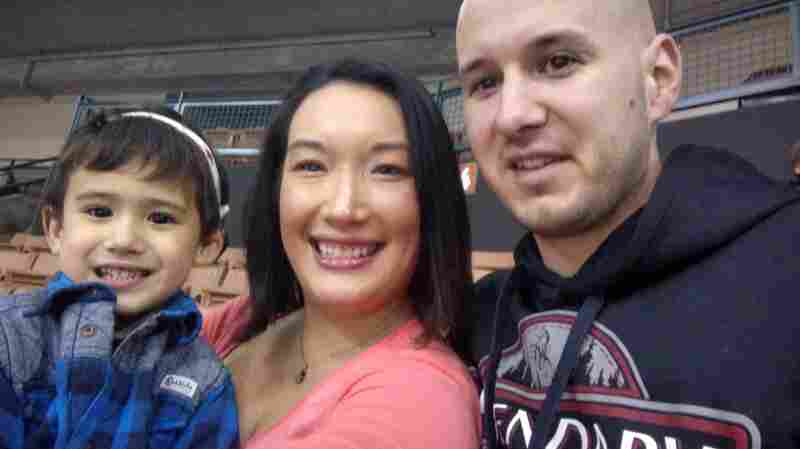 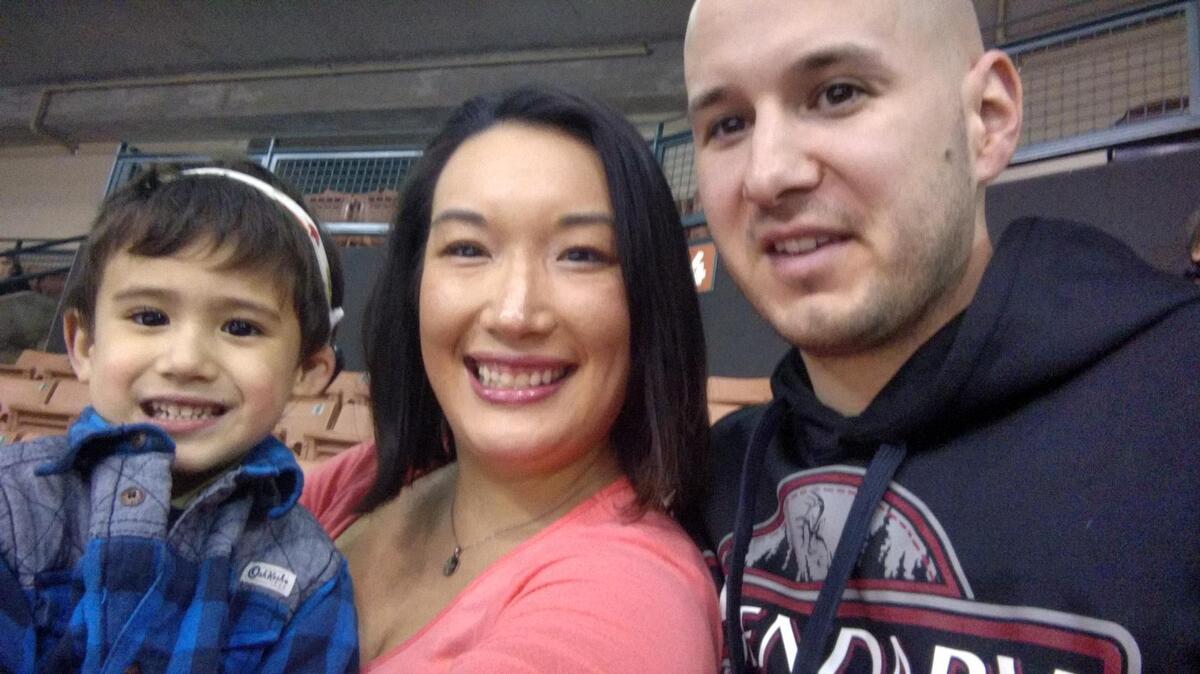 Nancy Glynn, her husband, Michael Gebo, and their son, Hunter, attend a minor league baseball game near their home in Manchester, N.H.

The "diet" comes in because Glynn, a waitress, couldn't afford to buy meals in the hospital cafeteria. In large part, that's because that whole time she was out of work, she wasn't getting paid, and — because Hunter was premature — she and her husband hadn't had as much time to save up.

"I thought I had some paid leave," said Glynn. "And then I started looking through my employee handbooks, and I was going, 'Wait a minute. No, I don't.' "

Paid Family Leave has become a frequent topic of conversation — at the playground, in corporate human resources offices and in state and local government. On the campaign trail, it easily gets lost. That's despite broad public support and candidates on both sides of the aisle who have raised proposals for it.

Public support for a federal paid family leave program is widespread and bipartisan. A poll taken earlier this year for the National Partnership for Women and Families found 76 percent of likely 2016 voters say they favor the creation of a federal fund for paid family and medical leave. But it doesn't rank on lists of top issues weighing on the minds of voters. 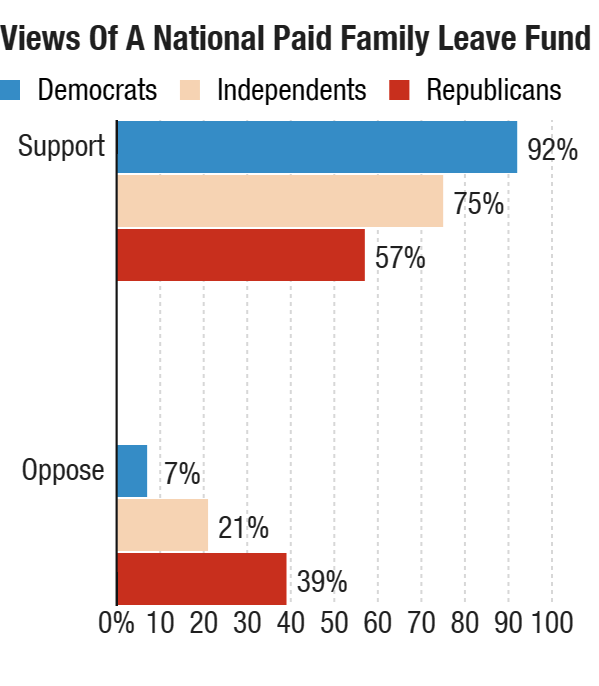 The Family and Medical Leave Act was signed in 1993 and created up to 12 weeks of unpaid leave for the birth of a child, caring for a sick relative or for a personal illness. Since it is unpaid, however, many people can't afford to take it.

The NICU Had Graham Crackers

The NICU had graham crackers. "And they had those little tiny juices that, you know, in all honesty you need to have three of those things to really equal out to one glass," Glynn said. "Well, that's what I survived on, honestly, for weeks. I hardly ate anything."

Glynn and her husband, a warehouse supervisor, live in Manchester, N.H. Neither of them gets paid vacation or sick time, and she only discovered after she got pregnant that she didn't have paid maternity leave either.

Only 12 percent of private-sector workers have access to paid family leave, though 39 percent are able to piece it together by using sick or vacation time, according to the White House Council of Economic Advisers and U.S. Department of Labor.

The challenges Glynn faced aren't isolated or particularly new. But the idea of paid family and medical leave for everyone is gaining steam politically, especially on the left. New York Gov. Andrew Cuomo recently signed legislation creating a paid-leave program in his state. California just expanded its program, and both candidates seeking the Democratic nomination for president regularly talk about paid leave in their stump speeches to much applause.

Glynn watches discussions of this issue with great interest. Last summer, Glynn's little family was hit hard again. She had another son, Sawyer. He, too, was premature. He only lived for an hour. A little less than three months later, she was back at work.

"When it was time for me to go back to work, the first question everybody asks you is, 'Are you really ready to come back?' " Glynn said. "And I wasn't. And I'm still not completely myself yet."

But the bills couldn't wait.

"They kept my job, which was fantastic," Glynn said. "And they were supportive in the sense of, you know, emotionally being there. But unfortunately financially we couldn't handle it. Even now, just yesterday, we were trying to group our money together to be able to keep our heat from getting disconnected again."

It's Not 'An Epidemic Of Personal Failings'

A number of societal and political changes in the United States since the 1990s have brought the idea of paid leave heightened attention this election year. The Obama administration has made a big push; people talk a lot more publicly about work-life balance than they used to; more men want to take paternity leave; and more women than ever are the primary breadwinners in their households, to name a few.

NPR's Danielle Kurtzleben explored the reasons the issue is now registering. She also looked at why so many other countries in the developed world mandate paid leave, but the U.S. does not.

Kristin Rowe-Finkbeiner, CEO of the grass-roots advocacy group MomsRising, said people have long thought of these as personal problems, not public policy challenges. But, she added, that attitude is changing.

"People are realizing that when this many people are having the exact same problem at the exact same time, we don't have an epidemic of personal failings where people simply just couldn't cobble together nonexistent access to sick days or to paid time off," Rowe-Finkbeiner said. "We have actually a national structural problem that we can solve together." 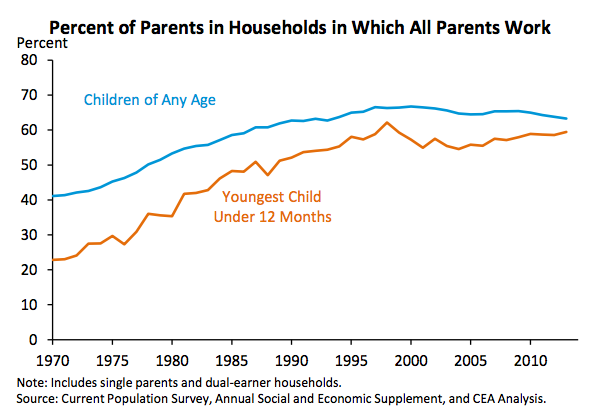 An increase in the percentage of homes where all parents work, driven largely by more mothers entering the workforce, is part of what has driven the desire for paid family leave. The White House hide caption

In addition to New York's and California's recent efforts, Rhode Island and New Jersey also offer paid family leave. And, in the private sector, high-profile businesses like Netflix and Yahoo! have made a show of offering paid family leave, as they use benefits to try to attract the best workers.

Where Do The Candidates Stand?

Both Hillary Clinton and Bernie Sanders want a federal program offering 12 weeks of paid family and medical leave that would partially make up for lost wages. Sanders would pay for it with a payroll tax split by the employer and employee. He supports a Senate bill that would do just that.

Clinton says this amounts to a tax increase on the middle class, something she has vowed she would not do. Clinton would pay for her paid-leave program with other tax increases on the wealthy.

Before he dropped out of the presidential race, Republican Sen. Marco Rubio called for a tax credit to give employers an incentive to offer paid leave to their employees.

In the business world, some argue this isn't something the government should deal with or mandate. Instead, they say, employers should offer more attractive benefits to their workers on their own. Lisa Horn with the Society for Human Resource Management argues that a federal paid-leave program would be a new entitlement. Her organization encourages its members to offer paid leave as a perk, to help recruit the best employees.

"We feel strongly that we should be looking for ways to encourage and incentivize and help employers continue to innovate in that area rather than pursuing those rigid mandates," Horn said.

In the current political environment, with a Republican-led Congress that doesn't favor creating a new program, a voluntary private-sector approach is winning out nationally.

There isn't a massive political force demanding paid family and medical leave. But advocates say that could be a chicken-and-egg problem. Politicians haven't historically campaigned on it, so people don't consider it a voting issue, and since it doesn't drive voters to the polls, politicians don't talk about it as much.

Another reason is that paid family and medical leave has been largely relegated to the category of "women's issues," because most of the conversation is about maternity leave.

The reality is that not just new moms would benefit. But most of the other reasons to use it are depressing, like the loss of a parent or dealing with cancer or an injury at work, so even advocates tend to focus on spending time with a new baby. And that doesn't attract those who don't plan to have kids or did so long ago.

Editor's Note: Politics in Real Life is a new NPR series looking at issues impacting people's lives and how they match up with rhetoric on the campaign trial. Follow along and join the conversation on social media: #PoliticsIRL