Accessibility links
As Factory Jobs Slip Away, Indiana Voters Have Trade On Their Minds The state has been steadily losing manufacturing jobs for years. The issue is already playing a big part in the presidential campaign, and it could drive a lot of people to the polls on Tuesday. 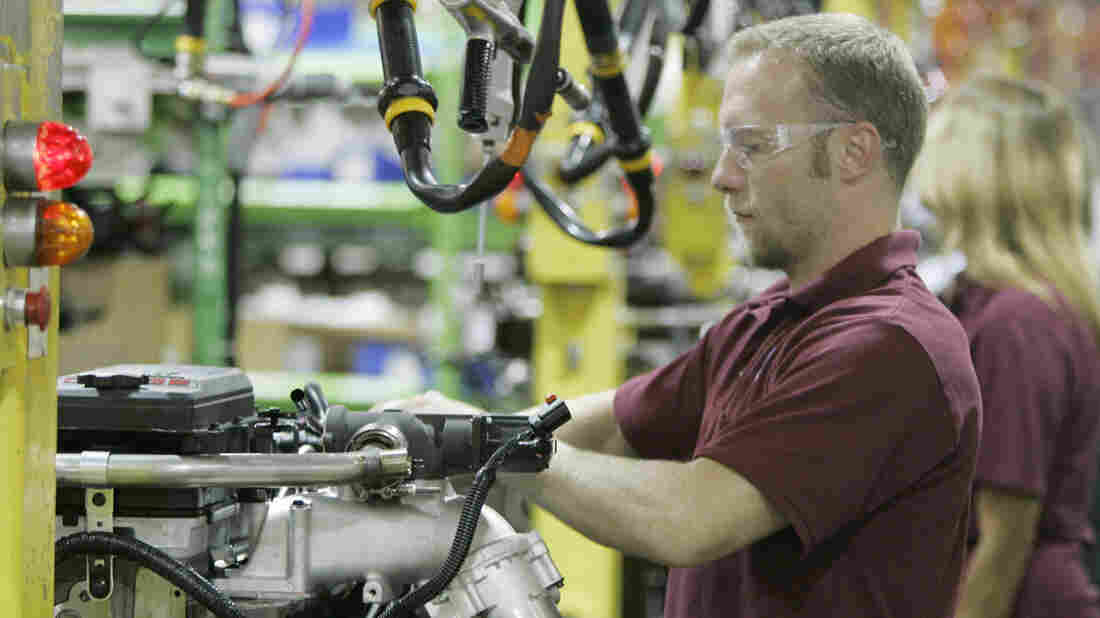 An engine is assembled at a Cummins plant in Columbus, Ind., in 2007. The Fortune 500 company sells diesel engines around the world. Darron Cummings/AP hide caption 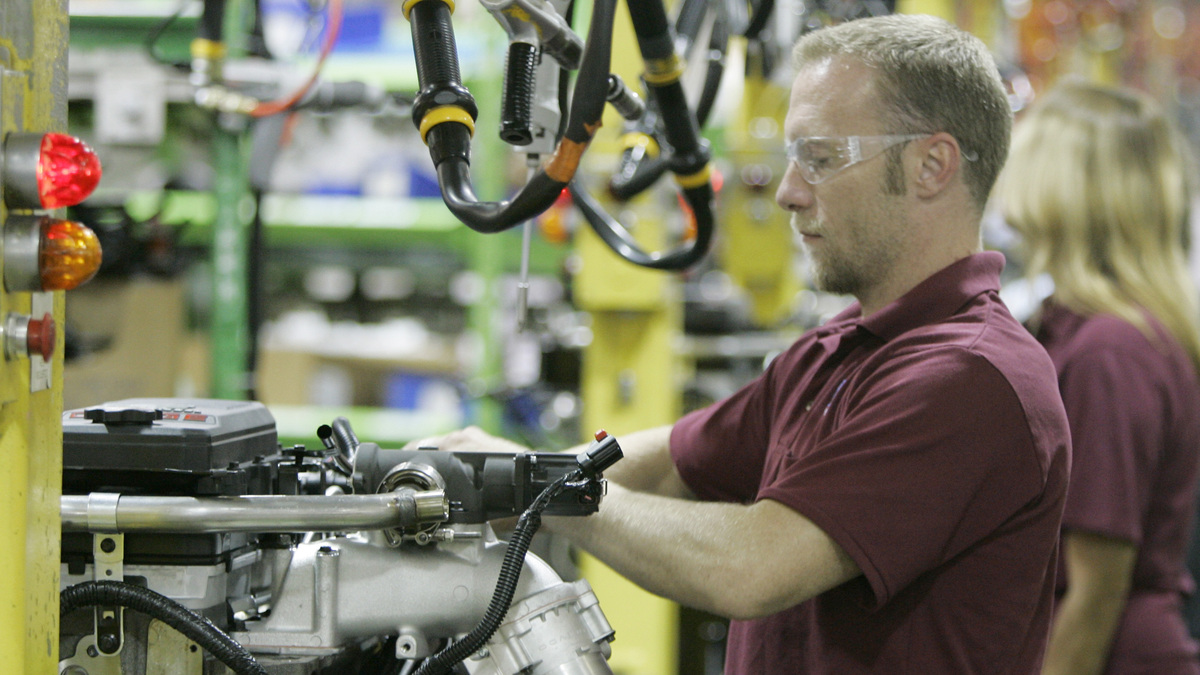 An engine is assembled at a Cummins plant in Columbus, Ind., in 2007. The Fortune 500 company sells diesel engines around the world.

Matt Coy likes to tell people how he went 47 years without voting. Not once. Not even for high school class president.

But there he was last Friday at an early-voting center at a county parks building in Columbus, Ind., excitedly preparing to cast his ballot for Republican Donald Trump.

"I've lost three factory jobs in the last 10 years, to go to China or go to Mexico or go to somewhere out of the country. We're losing our jobs to everybody else. We need 'em back. I think he can do it," Coy said.

In 2 Indiana Cities, All That Trump And Obama Touched Isn't Political Gold

Manufacturing plays a bigger part in the economy of Indiana than it does in any other state, and as Indiana residents head to the polls Tuesday, the slow erosion of the state's factory jobs is expected to weigh heavily on the minds of a lot of voters.

In 2000, the state had about 672,000 manufacturing jobs; today it has a little more than a half-million, according to the Bureau of Labor Statistics. Some of the jobs have been lost through automation and higher productivity, but like other Rust Belt states, Indiana has also watched some of its factories pull up stakes and head for low-wage countries.

"Even while the economy was growing, both overall in the country as well as the state, we were losing a lot of manufacturing jobs," said economist Timothy Slaper, of the Indiana Business Research Center at Indiana University.

The most notorious closing was Carrier's decision to abandon its Indianapolis plant and relocate to Mexico, costing Indiana some 2,100 jobs. The decision has been harshly criticized by Trump as well as Democrat Bernie Sanders, who spoke at an anti-Carrier rally in Indianapolis last Friday.

"I mean, it's just corporate greed," said Ronald Hardin, a longtime plant employee who attended the rally. "They want more money. They're making a lot of money but they want more."

To be sure, Indiana's economy has recovered nicely since the financial crisis, with an unemployment rate of 5 percent. The state has plenty of companies that compete successfully in the global economy, especially in life sciences and transportation.

"Because of technology, because of air travel, we are more integrated than we've ever been in the past, so the markets around the world are important and increasingly more important," says Phil Burkholder, president of Rolls-Royce's North America defense aerospace division.

At its Indianapolis plant, Rolls-Royce makes gas turbine engines used in civil and defense aircraft all over the world, and it is spending $600 million to upgrade its facilities. The company employs about 4,000 people in central Indiana, and production workers make on average between $60,000 and $80,000 a year.

But jobs at heavily automated plants like Rolls-Royce require a lot more technical training than the factory jobs of yesteryear, and as a result they can be hard to get, Indiana University's Slaper says.

"If you compare life back in the '40s and '50s, where you could even drop out of high school, walk down the road and get a job at the GM plant in Muncie — that kind of job just doesn't exist anymore," he says.

The loss of so many good factory jobs has made Indiana fertile ground for a protectionist message, and Trump, for one, is hoping that will give him a boost in Tuesday's primary.

It's a message Rosalie Barnhill, a retired secretary at an oil-services company, is receptive to. "There's too many jobs and manufacturers that go out of our country," she says.

But Russell Poling, an engineer at Cummins, the large manufacturer of diesel engines, says the United States needs to compete in the global economy, and he is skeptical of the talk about tariffs and trade wars in the current presidential campaign.

"If we're trying to export, we can't cut off imports, because that's what some people would like to see: We don't import anything but we ship everything out. Well, you can't do that, because nobody will take it," he says.