Accessibility links
Democrats' Brand Is Bad, But Republicans' Is Way Worse The unfavorable numbers for Democrats look pretty bad lately. Their one silver lining: The GOP's look even worse.

Democrats' Brand Is Bad, But Republicans' Is Way Worse

Democrats' Brand Is Bad, But Republicans' Is Way Worse 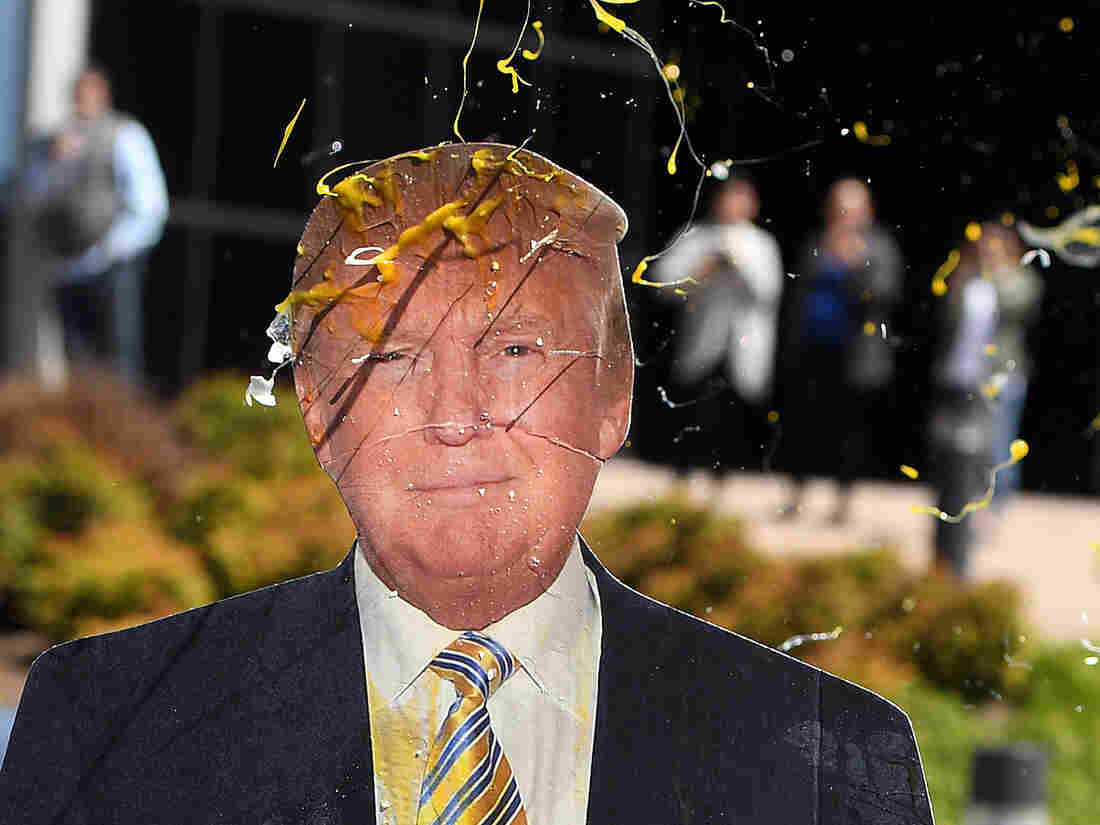 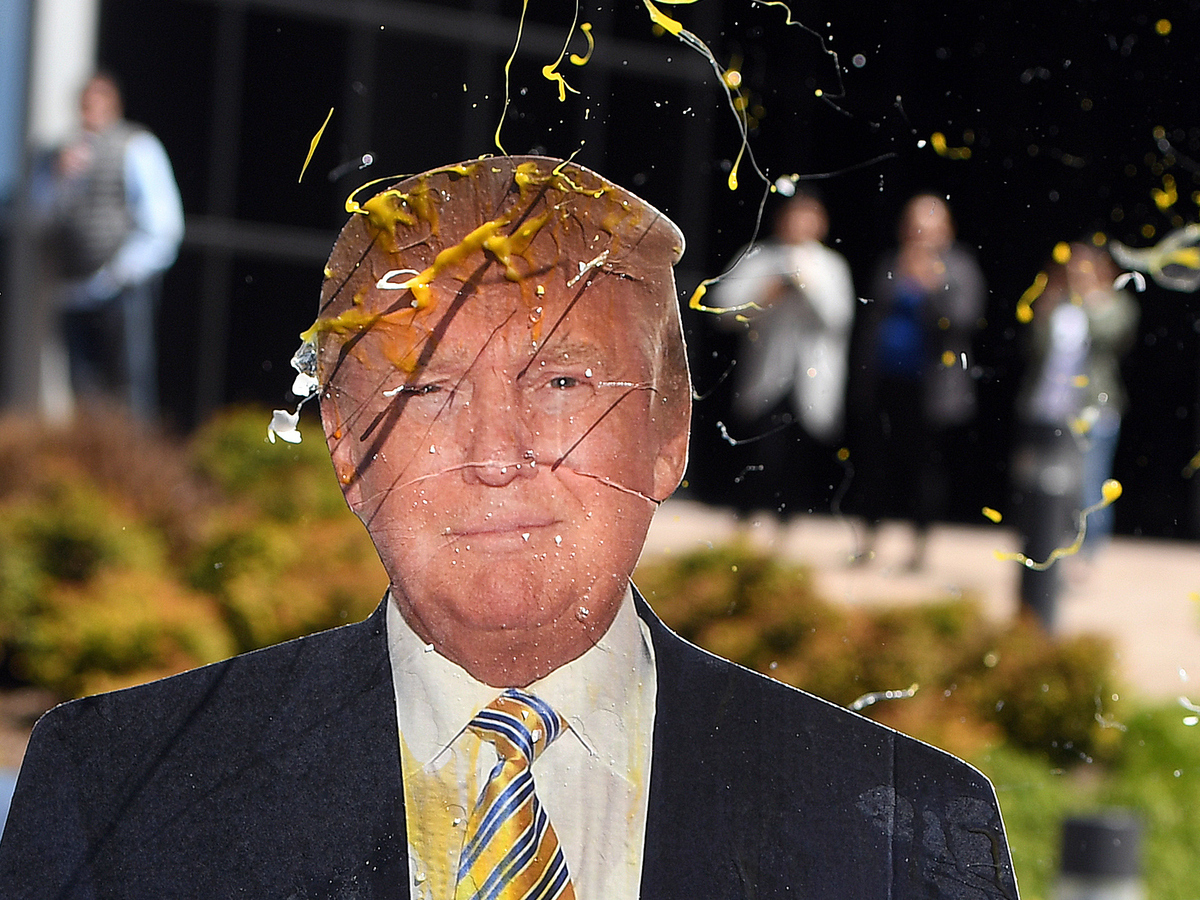 An egg is thrown at a cardboard cutout of Republican presidential candidate Donald Trump during a protest in Burlingame, Calif., last week.

The Democratic Party is looking the worse for wear these days. And that's putting it mildly. The party's net favorability rating has fallen off steeply in the past few years, and it's been negative or near-negative since 2010, according to multiple polls.

That would be cause for concern, except for one thing: The GOP looks much worse.

The Republican Party is viewed more negatively than at any time in a generation. According to the Pew Research Center, the GOP currently has its lowest net-favorability rating since 1992, the farthest back that Pew has data on this question. (Net favorability is the share who see the party favorably minus the share who see it unfavorably.)

It's not just Pew. CBS News in March also found the GOP's unfavorability rating at 66 percent — the highest since the first time it asked that question, in 1984. Right now in that poll, the GOP is at negative 38 net favorability compared with Democrats' negative 2.

Gallup likewise finds a similar pattern — plummeting GOP favorability, which, while not at record lows, is currently mostly sticking below the Democrats' numbers.

Taken alone, the blue line in the above chart would be alarming for Democrats — and to be sure, those favorability numbers are nothing to be proud of. But the current situation finds the two major parties fighting to see who can appear less unappealing to the American people. And the Democrats are winning that race.

It's coming from inside the party

The GOP's problem isn't just animosity from Democrats; their favorability problems are coming in part from Republicans themselves, which might help explain the appeal of Donald Trump, the ultimate "outsider" candidate.

Likewise, CBS found that 13 percent of Democrats have a negative view of their party; 39 percent of Republicans said the same of the GOP.

In part, the numbers reflect an electorate that's fed up with politics, period. Nineteen percent of Americans trust the government today — a near-record low since the 1950s.

Another way of looking at this is Pew's count of the share of Americans who have unfavorable views of both parties. That has shot up from 6 percent in 2002 to 25 percent today.

But it's still clearly much more a GOP problem. Yes, Trump and Cruz clearly have large numbers of voters who want them to be the nominee. But the GOP has struggled to gain broader appeal after losing the past two presidential elections, despite their massive success in the 2014 midterms.

That broader appeal is necessary to win in 2016, as the GOP noted in an unflinching 2013 "autopsy." That autopsy recommended promoting comprehensive immigration reform, for example, and reaching out more to women, young people and minorities. As several commentators have noted, Trump has not hewed closely to those recommendations, and it may be showing up in these numbers.

For Democrats (right now, at least), this is the beauty of a two-party system. Even if they're doing badly, they still have the edge at a time when the other party looks phenomenally bad.

And that is the dynamic shaping up in the presidential race, which is heading toward a contest between Clinton and Trump. They both have negative net-favorability numbers. In fact, each has the disapproval of more than half of voters right now, according to polls compiled by RealClearPolitics.

But Clinton fares better than Trump. According to RealClearPolitics' average, Clinton has an average favorability of 38.4 percent, compared with an unfavorable of nearly 55 percent — a net of negative 16.5 points.

For comparison, around this time in 2008, Obama's net-favorability numbers were all positive and usually in the double digits. Not only that, but Republican Sen. John McCain, who ended up losing the race, was also generally viewed positively. Romney in 2012 likewise viewed about as positively as he was negatively, well ahead of where either of today's most likely candidates start.

And yet Clinton may well face off against Trump in November. Trump's net-favorability rating is more than twice as bad, at negative 37. He would be the most negatively rated major-party nominee in American presidential history.

Low favorability may translate into low enthusiasm and low turnout, making it a tougher election for both candidates. Should they both be the nominees, there is clearly some population of voters out there who dislike both Trump and Clinton.