Accessibility links
Indiana Primary: 4 Things To Watch How much will Donald Trump pad his lead, and what will Ted Cruz do next? Even if Bernie Sanders wins, Hillary Clinton's lead is virtually insurmountable. And the GOP Senate primary is one to watch.

4 Things To Watch In The Indiana Primary

4 Things To Watch In The Indiana Primary 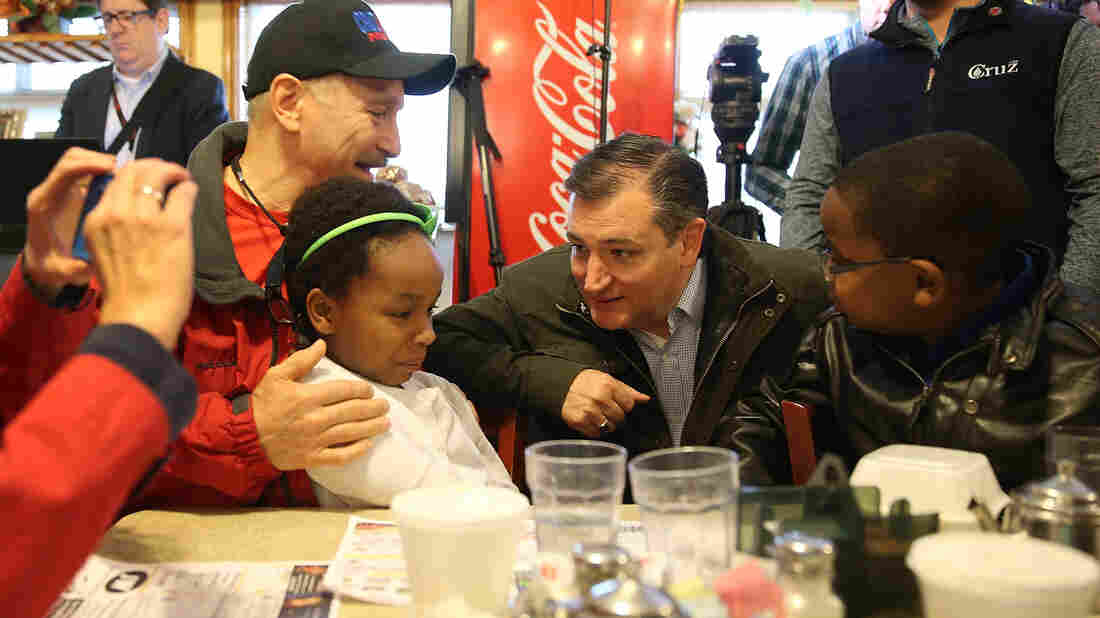 Republican Ted Cruz makes a campaign stop at the Bravo Cafe Monday in Osceola, Ind. The Hoosier State might be Cruz's last chance to stop Donald Trump from getting the nomination. Joe Raedle/Getty Images hide caption Republican Ted Cruz makes a campaign stop at the Bravo Cafe Monday in Osceola, Ind. The Hoosier State might be Cruz's last chance to stop Donald Trump from getting the nomination.

Political attention turns to the Hoosier State on Tuesday night, where both the Indiana Republican and Democratic presidential primary contests could be especially consequential.

Ted Cruz needs a victory over Donald Trump to stop the latter's march to the GOP nomination, but he's trailing in polls. The Democratic contest is closer, with Bernie Sanders and Hillary Clinton running neck and neck.

There's an important Republican Senate primary to keep an eye on, too. Here are four things we'll be watching on Tuesday night:

1. How much will Donald Trump grow his delegate lead?

This could well be the last stand for the #NeverTrump forces. They've poured millions into the Hoosier State but may well still come up short in one of their last best hopes to scramble Trump's delegate math equations.

Even after both Cruz and John Kasich announced an unusual quasi-alliance last week (which quickly crumbled), where the Ohio governor would pull his resources from Indiana, the Texas senator hasn't ticked up. Most polls show Trump with a comfortable lead over Cruz — and anything other than a win right now for the billionaire real estate mogul would be seen as an upset.

As it stands now, Trump has 996 delegates to Cruz's 564, and the GOP front-runner needs just 42 percent of all the remaining delegates to get to the magic number of 1,237, according to an NPR analysis. If Trump sweeps all of Indiana's 57 delegates (30 allocated to the statewide winner, 27 awarded by congressional district winner), then he needs just 36 percent of the remaining delegates to get there. He can't get to the requisite majority before California on June 7, but the only hope for both Cruz and Kasich now hinges on a multiballot convention and wooing delegates as they become unbound round by round (more on that here).

2. What does Ted Cruz do next if he loses?

It hasn't been the easiest few days for Cruz. His unusual gamble of naming former rival Carly Fiorina as his would-be running mate hasn't exactly given him the momentum boost he needs. Former Speaker of the House John Boehner literally compared him to Lucifer. And that lukewarm endorsement from Indiana Gov. Mike Pence certainly wasn't the knockout punch he needed, either.

How frustrated is Cruz? Just watch this encounter he had with a steadfast Trump supporter on Monday in Indiana. Even as he calmly ticks off facts about Trump's background, the vocal protester is unmoved. In a way, it is a microcosm of the crazy GOP primary so far — even though Trump has been hit time and time again with negative stories and policy flip-flops, nothing has stuck to Teflon Trump.

Campaigning Monday, Cruz vowed he is "absolutely" in it for the long haul. "I am in for the distance," Cruz told reporters. "As long as we have a viable path to victory, I am competing until the end."

But that viable path leaves him playing only defense, and it's a strategy that still is likely to fall short. Remember, Cruz (like Kasich a long time ago) is now mathematically eliminated from getting a majority of GOP delegates before the Republican National Convention in Cleveland. His only hope now is to block Trump from getting there too.

3. Can Bernie Sanders change the narrative?

The Democratic race is very close in Indiana, but even if the Vermont senator does get a win, it's unlikely to affect his surmounting delegate deficit against Clinton. The 83 delegates up for grabs will be distributed proportionally, but Sanders still trails the former secretary of state by 327 pledged delegates.

His campaign's new strategy is to sway superdelegates to his side, but that's a long shot if he trails Clinton in pledged delegates. According to NPR calculations, even if every superdelegate voted for the person who won his state's Democratic primary or caucuses, Clinton's superdelegate count would surpass Sanders' by more than 200. Her total delegate lead over Sanders would still be more than 500.

In a way, the 2016 contest could be a replay of sorts of the 2008 contest. Clinton narrowly eked out a win over then-Illinois Sen. Barack Obama. She was in closer striking distance to her top rival than Sanders is to her, but her last-ditch hope was also to flip enough superdelegates. That obviously didn't work out for her, and it most likely won't for Sanders, either.

4. Will the Indiana Senate become a real worry for Republicans?

National Republicans would much prefer to have Rep. Todd Young, a more traditional party stalwart, as their nominee than fellow Rep. Marlin Stutzman, who has been a conservative rabble-rouser in the House.

They'll probably get their wish, but Young almost didn't make the ballot at all. Both Democrats and Stutzman tried to challenge his signatures and get him kicked off the ballot, and he only narrowly survived.

Early on, it looked like deep-pocketed conservative groups such as the Club for Growth might go in hard for Stutzman, but they haven't come to his rescue. Most recently, Stutzman has come under fire for paying his brother-in-law (who had no previous political experience) more than $170,000 from his campaign account.

This is a long-shot target for Democrats. They'll have former Rep. Baron Hill as their nominee, though they would have preferred former Sen. Evan Bayh. Obama carried this state in 2008 — and it could become a presidential battleground later. But until then, this isn't a top Democratic target or a Republican worry.