Accessibility links
After Ted Cruz Dropped Out, His Watch Party Became The Saddest Room In America It would be hard to overstate the amount of tears that were shed in that room after Cruz's announcement. There were cries that shake your chest cavity. Tears that run your makeup off your face.

After Ted Cruz Dropped Out, His Watch Party Became The Saddest Room In America

After Ted Cruz Dropped Out, His Watch Party Became The Saddest Room In America 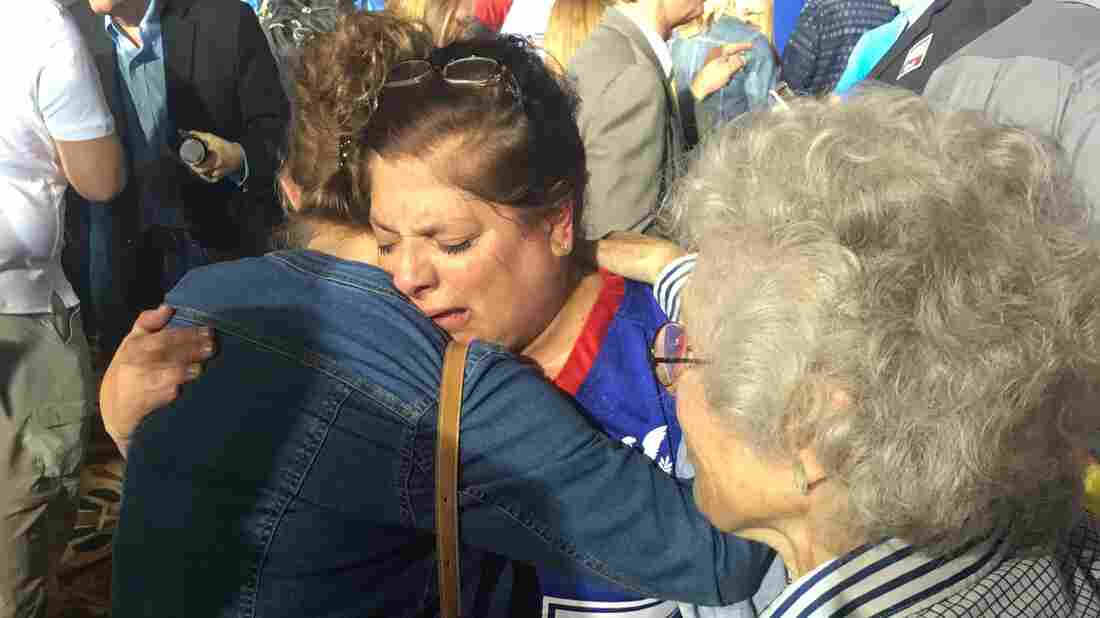 Tearful Ted Cruz supporter Linda Bond hugs another supporter after her candidate exited the race Tuesday night. "[I'm] sad, hurt. Hurt by Americans," Bond said. "I believe that they had an opportunity of a lifetime and instead gave in to anger and emotion instead of thought." Sam Sanders/NPR hide caption 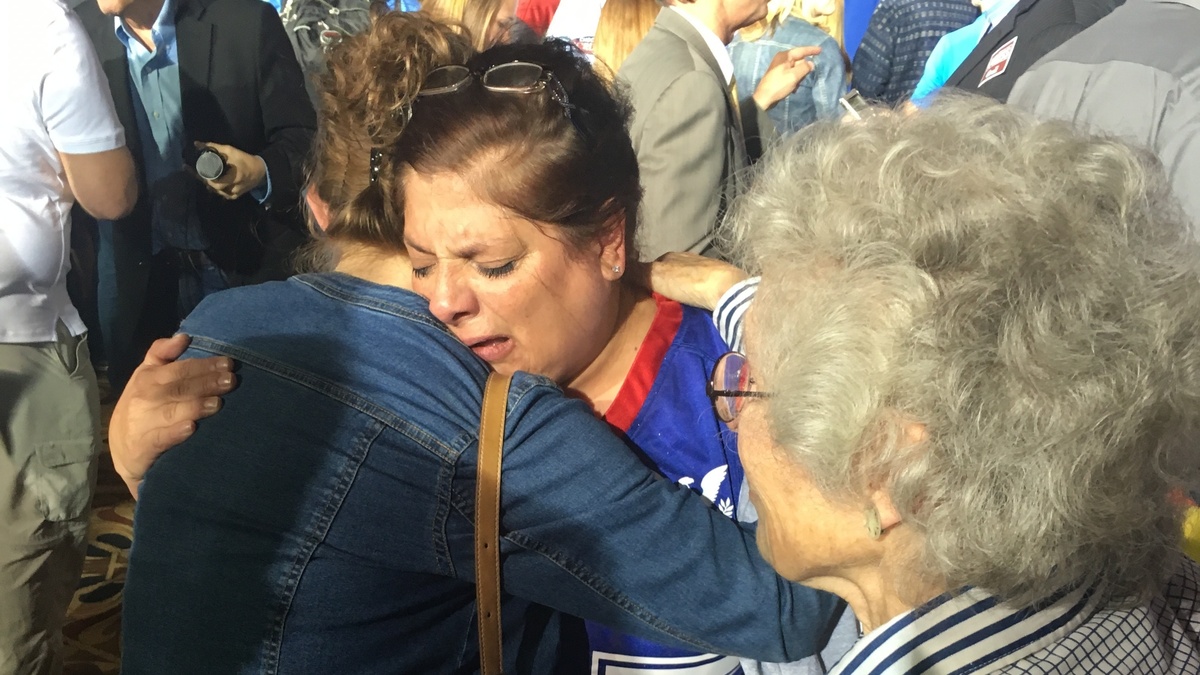 Tearful Ted Cruz supporter Linda Bond hugs another supporter after her candidate exited the race Tuesday night. "[I'm] sad, hurt. Hurt by Americans," Bond said. "I believe that they had an opportunity of a lifetime and instead gave in to anger and emotion instead of thought."

The Ted Cruz event in Indianapolis on Tuesday night — deemed an election night watch party — was set to begin at 7 p.m. ET, right about the time Cruz supporters found out their guy had lost Indiana by a whopping margin. But just about everyone stayed after the news got out. Because when you're a supporter, you're a supporter.

They thought that once Cruz took the stage, he'd rally the troops and declare, yet again, that he would take his floundering presidential campaign all the way to the Republican National Convention in July, hoping for a delegate miracle on a second ballot.

So there was waiting. And time for Cruz supporters to reflect and reassure themselves in the Grand Hall Ballroom of the Crowne Plaza Downtown Union Station. CNN played on multiple big screens. Strangely, Bernie Sanders' speech after he won Indiana was broadcast to the room of Cruz supporters.

I've been working in the Republican Party for 32 years. This is the first time ever I will not be able to do that.

A few times, when Cruz's face or name appeared on CNN, the crowd would cheer, but mostly they waited. Hung by the bar. Took selfies. Chatted. Strategized about how they could help Cruz the next day, as his campaign pushed on, when he perhaps might need it most.

But then there were rumblings. Tweets and such. Cruz was going to drop out. Many said they didn't believe it, but around 8:30 p.m. the man himself confirmed the news. Toward the end of a long speech filled with thanks to his supporters, family and friends, and much discussion of Ronald Reagan's legacy, Ted Cruz dropped out of the presidential race. 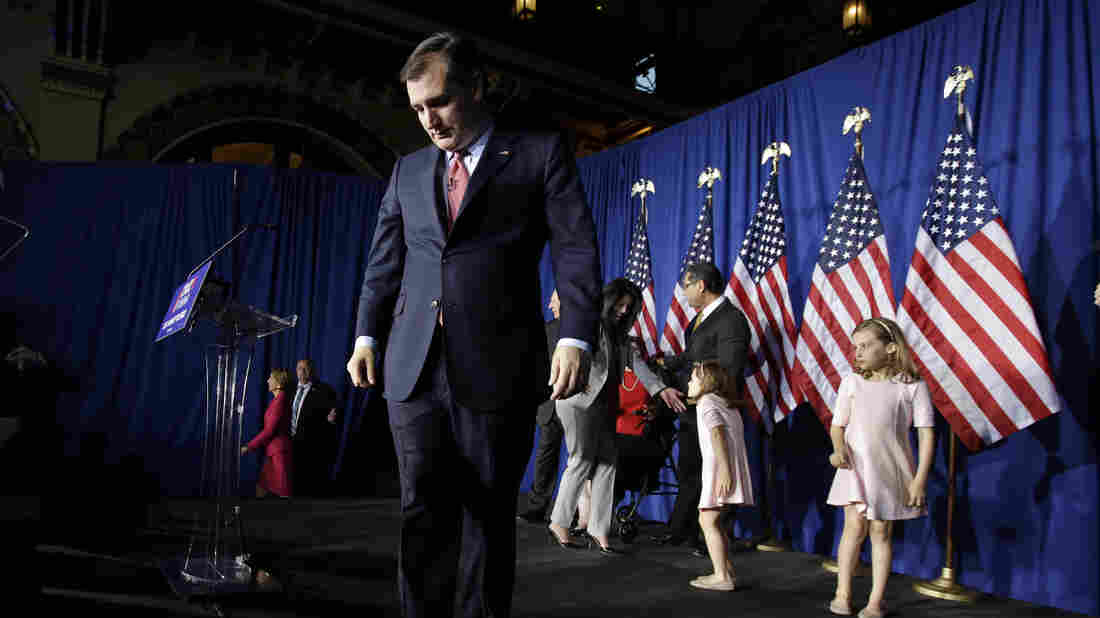 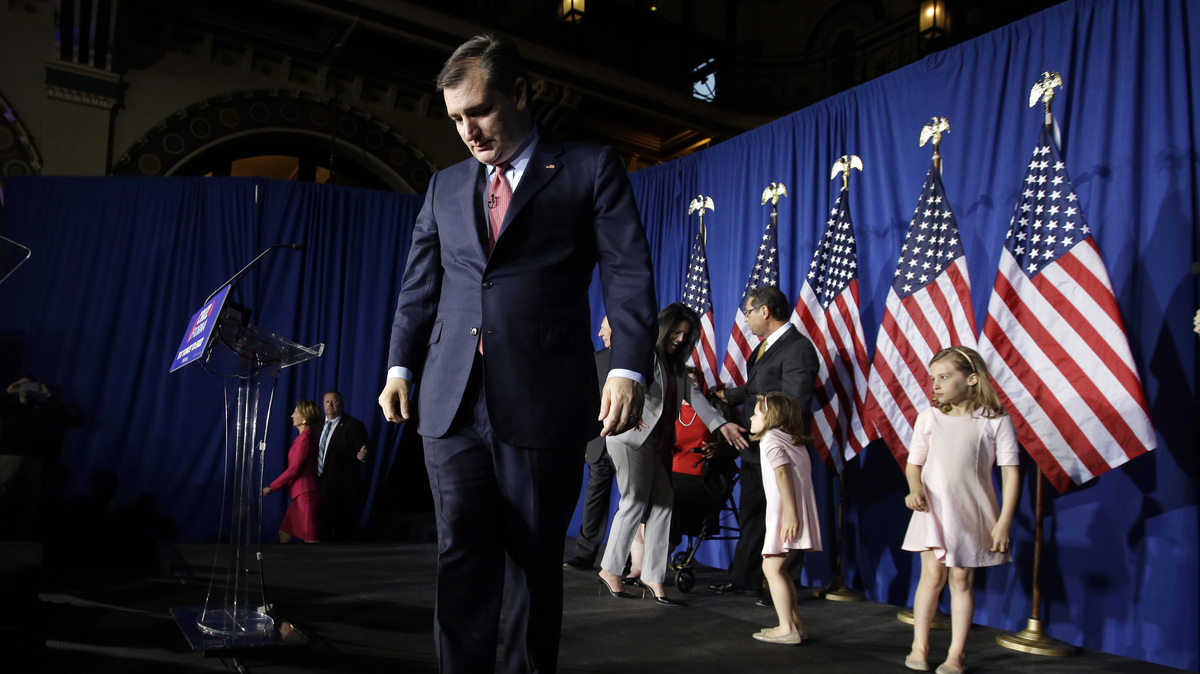 The feeling in the room was somewhere between the pain you feel being on the side of a football stadium whose team just lost the championship in a nail-biter, and the pain you feel at the moment you realize you lost all of your retirement savings in a stock market crash.

It was a scene. Defiant yells of "NO!" Audible gasps. Almost immediately, tears, and hugs between strangers.

Many in the room didn't want to believe it.

"I didn't see it coming," Kathleen Sawtell said. "I mean, I got an update [from Fox News on her phone, before Cruz's speech], but ... until he said those words, I was like, 'It could go on.'"

Cruz supporter Linda Bond cried her way through several TV interviews after the Cruz speech, hugging others in the room and wondering how it all went wrong. "I've been working in the Republican Party for 32 years," she said, choking back tears. "This is the first time ever I will not be able to do that."

For Bond, the end of Cruz's candidacy was about more than just Cruz; it was about America. "[I'm] sad, hurt. Hurt by Americans," Bond said. "I believe that they had an opportunity of a lifetime and instead gave in to anger and emotion instead of thought."

Bond tried to keep talking, but eventually, she couldn't fight the tears any longer. A woman in a blue jean jacket and a skirt adorned with hundreds of miniature American flags came to hug her. Another woman held her shoulder.

Cruz's exit came as a shock for supporters who, just over an hour earlier, were optimistic he'd be in the race until the convention — and still had a shot at the presidency.

Sawtell and Alex Echeverria, a young couple there supporting Cruz, said the news of his Indiana loss was a setback, but not the end of the world. "A little disappointed," Sawtell said of her mood. "But I don't think it's the end of the road by any means for the Republican race."

Echeverria commended Cruz for his stamina: "He's still here. All those big names like Jeb Bush and Scott Walker are gone. But he's still here, so I think he'll go to the end."

But Echeverria did seem to signal, before knowing Cruz would drop out, that in spite of his hopefulness, Cruz might ultimately lose. "Even if he does not get the nomination, even if he isn't who we pick to run our party as the presidential nominee," he said, "I think he has started something great."

And he wondered whether Cruz had entered a different phase of his campaign, shifting focus to affecting the party platform, instead of actually winning the nomination. "I think you can say, he's doing kind of what Bernie Sanders is doing; he's staying in the race and making sure whatever platform we have, that our voices are heard."

Jeff Willenzik, standing in the crowd before the event, had said Cruz needed to turn his campaign around as he headed toward the convention.

"It does seem like recently he's shifted more toward perhaps a little bit of desperation," Willenzik said, adding that he'd seen some similarities to the end of Marco Rubio's presidential run, grasping for straws just before the end. Willenzik pointed to Cruz's VP pick of Carly Fiorina, and his extended back-and-forths with both Trump and an angry Trump supporter over the last few days.

But he, and so many others in the room, wanted Cruz to stick it out.

Across the room after the announcement, Cruz's wife, Heidi, remained after her husband left, shaking hands and encouraging the discouraged.

That room also voted for a man who had just dropped out.

People lingered even longer, in the way people often do after a funeral. And around 10 o'clock, maybe inspired by the bar, or just the solemn comaraderie in the space, about two dozen Cruz supporters walked toward the middle of the Grand Hall Ballroom of the Crowne Plaza Downtown Union Station (a building located in a former train station), and began to sing the national anthem.

In that moment, you could say the Grand Hall Ballroom was maybe the saddest room in America.

But at the song's conclusion, many cheered, and a few yelled out "2020!" looking toward another presidential run for Ted Cruz in a few years.

So perhaps it was fitting that the event was held in an old train station, where many journeys end, but where just as many begin. Last night could have been Ted Cruz's funeral, but his supporters hadn't written off a second life just yet.