Accessibility links
Book Review: 'The Queue' By Basma Abdel Aziz Basma Abdel Aziz's new novel is set in an unspecified Middle Eastern city, where an endless line snakes back from the mysterious Gate where citizens await pronouncements from a sinister government. 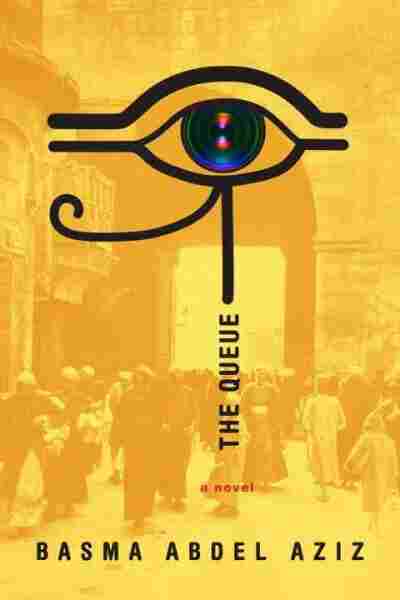 In an unspecified Middle Eastern city, a doctor is drawn to and troubled by a particular patient file. The file documents the injuries of a man named Yehya, sustained after a skirmish called the Disgraceful Events. Not only are the events shrouded in mystery; Yehya himself does not know who shot him. And the doctor would have already removed the bullet, except for the fact that in that aftermath of the Disgraceful Events, the government has made it illegal to do so without a certain permit. Yehya must get that permit so the doctor can do the surgery. To get the permit, he must go to the Gate. To go to the Gate, he must enter the titular queue.

The people of this city have been joining the queue ever since the Disgraceful Events, but it never moves or dissipates. It simply grows and grows farther and farther away from the Gate, kilometers long, out of sight. The citizens have their own reasons for being there: A woman whose daughter died because of the bureaucratic red tape is attempting to save her other child; a man whose security officer cousin died during the Disgraceful Events seeks recognition for his sacrifice; a journalist is trying to piece together the truth. And Yehya must get his permit, to save his life.

A whole community springs up around the queue: systems of barter and trade, gossip and deals. A mysterious telecommunications company gives away free phones, and surveillance — and disappearances — begin. Newspapers are replaced by a single paper called The Truth. Decrees and laws rain down from the Gate. Faith is weaponized against the people. Polls of the population in regards to their government are allegedly unanimous in their support, and thus abandoned entirely. Yehya's colleague Amani risks everything to enter the official government hospital to get her hands on a crucial X-ray — and pays a terrible price. And throughout, Yehya grows weaker and weaker, the people around him more desperate, and the government more oppressive and evasive.

The Queue's regime's attempt to rewrite reality — to propagandize, shift blame, and then alter the truth entirely — is particularly chilling in the face of Yehya's slow-moving injury. The bullet in his body is evidence of the government's role during the Disgraceful Events, yes, but more than that, it is unmistakably real. It is lodged in his guts, gradually killing him, and no amount of Orwellian double-speak ("It urged citizens not to be misled by what they had seen, no matter how confident they were in the accuracy of their vision") or re-creation of events can alter that fact.

'The Queue' is the newest in this genre of totalitarian absurdity: helpless citizens — some hopeful, some hopeless — struggling against an opaque, sinister government.

Even after the regime gets to Amani — whose punishment is one of the most disconcerting scenes in the novel — Yehya will not be persuaded. "She tried to convince Yehya, that the bullet that had pierced his side and lodged itself in his pelvis was a fake bullet, and it wasn't important to remove it, and that he no longer needed to trouble himself with who had shot him," Aziz writes. "But Yehya was not convinced, and he did not stop bleeding."

There are echoes of many other books in The Queue, which was translated from the Arabic by Elisabeth Jaquette: Vladimir Sorokin's novel of the same name, which pokes fun at endless Soviet lines; Kafka's The Trial, Orwell's 1984, Huxley's Brave New World, all of which have a shared, surreal vision of an impenetrable, dystopian bureaucracy and government overreach, where simple tasks are obfuscated by paperwork and formal processes not meant to be breached.

And so The Queue is the newest in this genre of totalitarian absurdity: helpless citizens — some hopeful, some hopeless — struggling against an opaque, sinister government, whose decrees, laws, propaganda, and red tape would be comical if they weren't so deadly serious. Here, the novel seems to be nodding toward the political unrest after the Arab Spring as a real-life analog, but it could be any number of other conflicts, cultures, or periods of history with only minor variations.

And that, ultimately, is what makes The Queue such an effective critique of authoritarianism. The familiarity of the narrative, the banality of collective evil, is the most unsettling element. People — for, no matter the euphemism, the force behind Big Brother and the Gate and real-life totalitarian governments is just people — will always find a way to control other people in one way or another, should it suit them. Perhaps with the publication of The Queue, the lesson will begin to finally sink in.