Accessibility links
Review: Jennifer Nettles, 'Playing With Fire' Few who've been following the Sugarland singer's career could deny her expressive range, but even she had never reveled in it quite this freely until now. 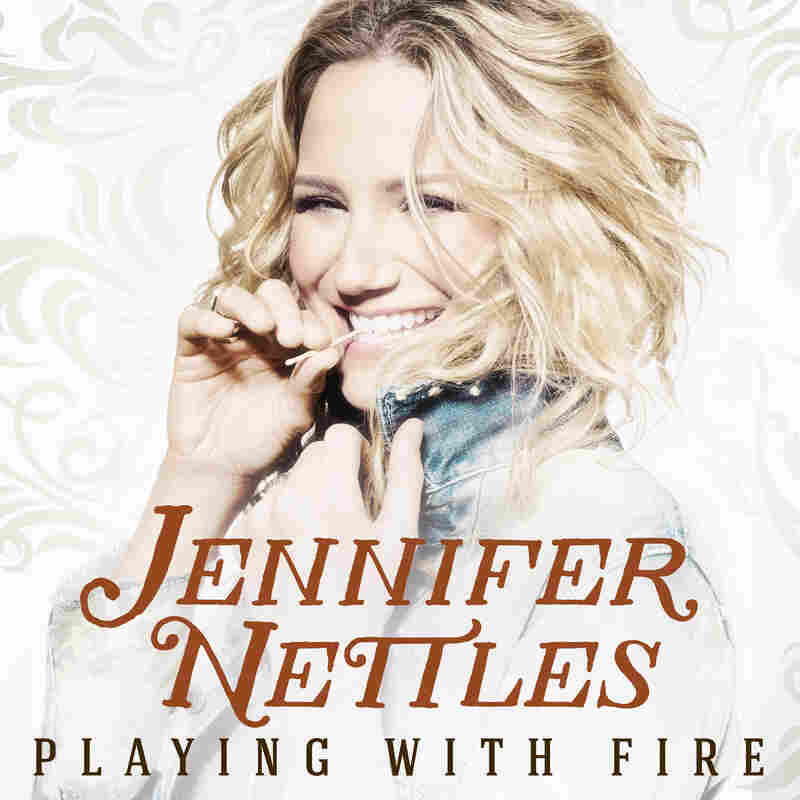 The subject of motherhood is often heaped high with social and cultural expectations. When a woman takes on the role of raising children, she may find herself defined primarily by those attachments in others' eyes, regardless of how she views her own multifaceted identity. And she may decide that this dissonance calls for a creative and conscious response.

After becoming a new mom a few years back, Jennifer Nettles navigated the media gauntlet with aplomb, sharing endearing photos of her infant son as she made the rounds promoting her album That Girl, a Rick Rubin-steered effort that cast her in a softer and more somber light than anything she'd done with her effervescent country-pop duo Sugarland. Nettles has since offered a frank reframing of how she experienced that time in her life, reflecting in an interview, "[A]ll of the air had been sort of sucked out of part of my identity." She went on, "And I think a lot of women go through that, but nobody likes to talk about it, because you get embarrassed. Because motherhood is supposed to be the best thing that ever happened to you, and yet it's very challenging."

The Georgia-born singer and songwriter might have appreciated the way the poet Marge Piercy once described the limits of a woman's endurance when it comes to maintaining the most agreeable image possible: "Her good nature wore out like a fan belt." To capture her own internal unloosing, Nettles reached for more elemental language. "I feel fiery in my life," she told an interviewer. "I feel fiery in my art."

That's the spirit of Nettles' dozen-song set, Playing With Fire. From the opening flourish — a melismatic shout over a dramatically elongated organ chord, the sort of churchly windup one might find in decades-old African-American gospel or soul — she signals that she has no intention of toning down her performances for the sake of tastefulness or temperance. In fact, she cunningly and deliberately lays it on thick, relying on producer Dann Huff for a panoramic display of grandness and gloss. Her full-bodied vocal performances are often embroidered in lusty twang and frisky theatricality; she did, after all, land a leading role in a recent Broadway revival of Chicago. Those vocals undeniably serve as the main event, and in keeping with the scale of the proceedings, her singing rarely commands just one track at a time; she's her own dynamic backing chorus.

There's plenty of melodrama to be found in the surging extravagance of "Starting Over," an outpouring of romantic anguish that rivals Reba McEntire's most beloved early-'90s ballads, and in "Unlove You," which luxuriates in heartache. Nettles gives even more time to countrified camp, another of her specialties, swapping lines with Jennifer Lopez in the perky, rural-urban odd-couple number "My House," playing the part of a devilish schoolyard tease in "Sugar" and bearing cheeky testimony to the frazzling burdens borne by wage-earning moms in "Drunk In Heels," one of several songs co-written with the gifted folk-country storyteller Brandy Clark.

But Playing With Fire gets its real heat from Nettles' insistence that a woman's respectability and responsibilities need not suppress her desires. In the rollicking title track, you can feel her fan the flames of her indignation. "For just one goddamn time, I wanna put my whole self first," she warns, taking fierce, gleeful pleasure in unbottling her passion. "Stupid Girl," an adult-contemporary ballad that Nettles wrote alone, takes a more sly approach; the song plays out as a dialogue with the self, an intimate and pointed rejection of the message that a woman must be careful not to ask for too much. In the breathless, R&B-leaning "Chaser," Nettles refuses to take a backseat to any romantic rival, while she takes her time savoring erotic fantasy in the wistful waltz "Three Days In Bed."

Few who've been following Nettles' career could deny her expressive range, but even she had never reveled in it quite this freely until now.