Accessibility links
Republican Sen. Ben Sasse Calls For Third-Party Challenger To Trump, Clinton The Nebraska senator has emerged as a sometimes contrary voice in the Republican Party — most recently promising never to vote for Donald Trump. Now he is openly calling for a third way forward. 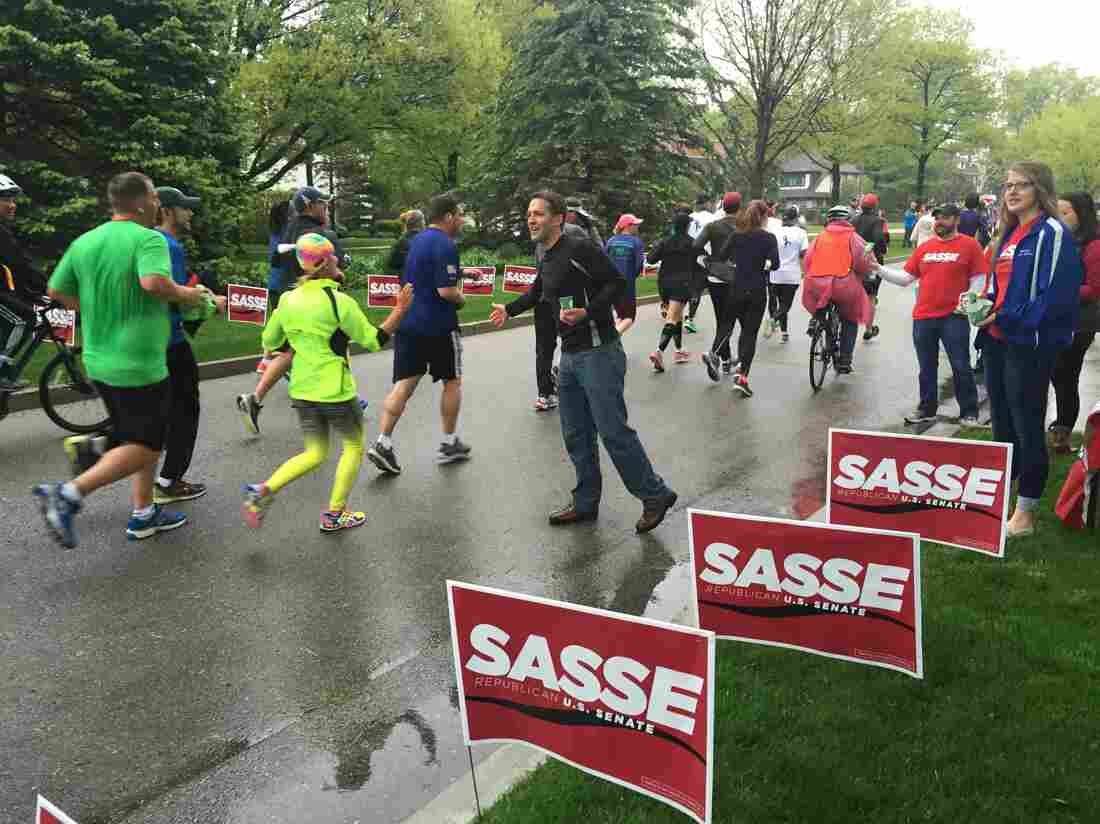 Sen. Ben Sasse hands out water at the Lincoln Marathon in Nebraska. The Republican has vowed not to vote for Trump and is calling for a third candidate to emerge. Sarah McCammon/NPR hide caption 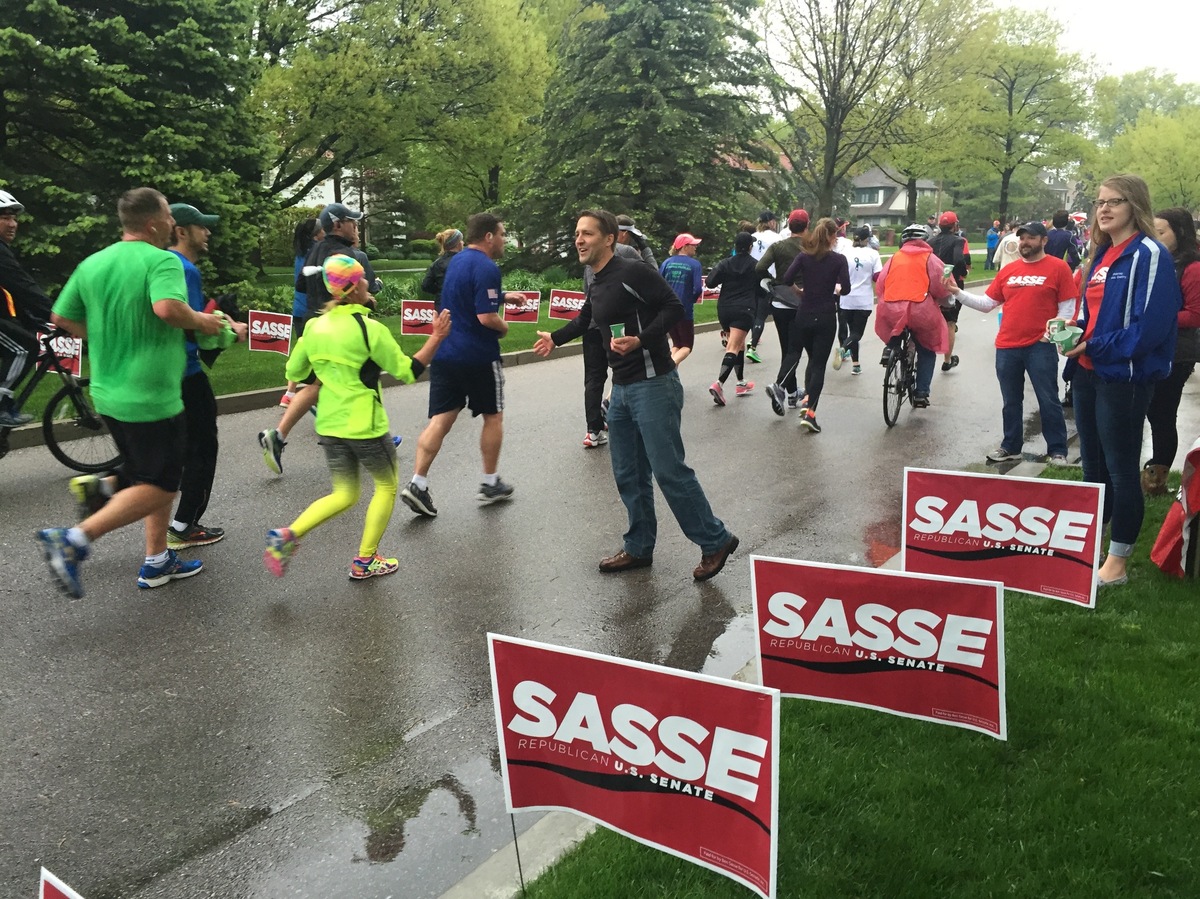 Sen. Ben Sasse hands out water at the Lincoln Marathon in Nebraska. The Republican has vowed not to vote for Trump and is calling for a third candidate to emerge.

Some Republicans who held off on backing Donald Trump are reluctantly coming around to the presumed GOP nominee. But for those who are still vowing never to support Trump, the big question is what to do.

The first Republican U.S. senator to disavow Trump was Ben Sasse, a freshman from Nebraska. This week, as Trump has become the party's apparent nominee, Sasse has doubled down. Sasse has published an open letter on Facebook and a storm of tweets criticizing both major parties and calling for a third way.

For weeks, Sasse has been saying that he will never vote for Donald Trump. He has even threatened to leave the Republican Party if it embraces the billionaire. On Twitter, he has said he thinks there's room for a conservative third-party candidate in the race — though he says he would settle for a moderate.

Sasse says when he goes home to Nebraska, he meets a lot of people who are frustrated with their options.

"At the grocery store or the gas station, the more common lament is, we have 320 million people in this country and we put a man on the moon, and these two candidates, these two party front-runners, one Democrat and one Republican, both really similar in some ways, that's the best we can do? People are confused by that," Sasse says.

At the Lincoln Marathon last weekend, Sasse's Senate campaign fund hosted a water stand where he and supporters passed out paper cups filled with water to thirsty runners.

Craig Ames, a retired hospital administrator who came to help out, says he has concerns about Trump, but he can't imagine voting for Democratic front-runner Hillary Clinton.

"I've never been quite so conflicted in a presidential election, and so concerned," Ames says.

Ames says he may end up voting for Trump — with a lot of misgivings. He adds he that respects Sasse for "voting his conscience."

For Alice Licht Anderson, who hosted the water stand in her driveway, Trump represents the kind of change she wants.

"I'm a supporter of Donald Trump for the very same reason that I supported Ben Sasse: refreshing news for Washington, D.C.," she says.

She says Sasse's opposition to Trump doesn't bother her. But Republican leaders may be less forgiving of his refusal to fall in line. On Facebook, he wrote that his "voicemail is overflowing with party bosses and politicos" telling him he has to support the Republican nominee.

Kramer says anyone calling for a third-party challenge should consider leaving the Republican Party.

Even the mayor of Sasse's hometown — a longtime Republican who once helped hire Sasse to turn around a struggling local college — says it's hard to see a way forward for a third-party option.

Fremont, Neb., Mayor Scott Getzschman says he likes parts of Trump's message but calls his rhetoric "scary." Still, he says it's hard to see how Sasse or anyone else could turn things around in 2016.

"It's a tall task to bring someone that's more conservative into the mix ... get that person out in front of the people, get their message out and build voter share. I think it'd be very difficult," he says.

"Ben will always stand up for what he believes in. Even if the Republican activists today ... are upset because he's said that he can't support Trump, so be it," says Fahleson, a friend and adviser to Sasse. "I don't think Ben cares."

It's not the first time Sasse has spoken out as a contrary voice. Last November, he took the unusual step of making his first speech on the Senate floor a critique of the institution.

Sasse and his wife and three children still make their home outside Fremont. The two oldest are home-schooled and take turns traveling with him to and from Washington.

During a recent interview in his D.C. Senate office, Sasse said his 14-year-old recently spent a month working on a ranch — and learning the Nebraska work ethic.

Sasse says his friends and neighbors ask him why they're facing what he describes as "two terrible choices." He says he thinks most Americans are unhappy with either Trump or Clinton and that both parties are on the verge of "massive upheaval." He predicts at least one significant third-party option in November.

But Sasse adds he will "absolutely not" be among those choices. There's a small movement among conservatives for Sasse to step forward. A spokesman for the Draft Sasse PAC says it is seeing more traffic this week. But Sasse insists he is not interested in so much as meeting with the group.

There are, of course, third parties already running presidential candidates — like the Green Party and the Libertarian Party. But historically, those efforts have failed to amass substantial support. This year, plenty of more traditional Republicans have also failed to challenge Trump from within.

For his part, Sasse says he is calling for someone else to run — but says he is staying his current course, at least for now.