Accessibility links
Black Panther, War Machine, And More: How 2016 Looks Like The Age Of The Black Comic Superhero From Black Panther to Luke Cage, filmmakers say audiences today demand superheroes that better reflect their world. Comic creators say it's about time TV and movies caught up with diversity in comics. 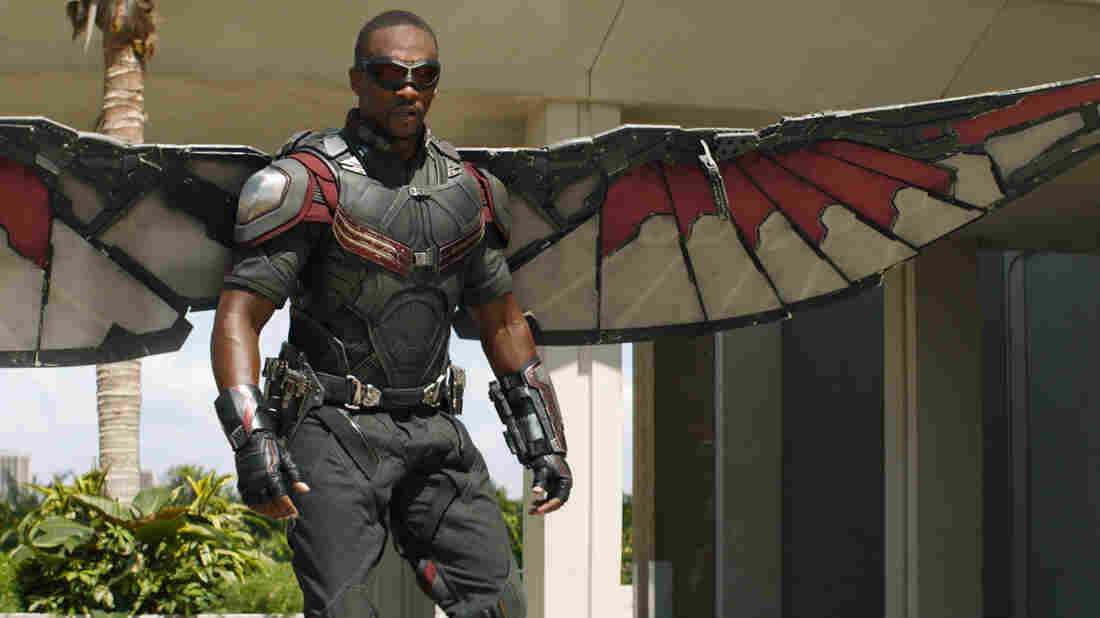 Anthony Mackie as Falcon in Captain America: Civil War — one of three black superheroes who play a major part in the movie. Film Frame/Marvel hide caption 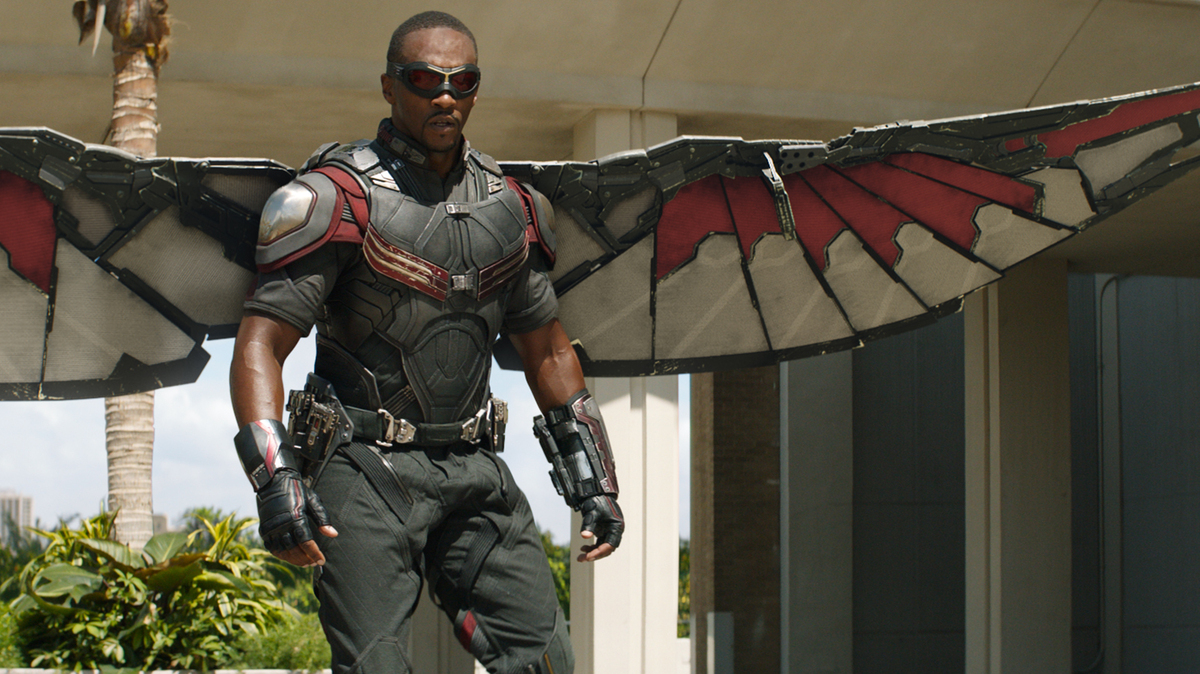 Anthony Mackie as Falcon in Captain America: Civil War — one of three black superheroes who play a major part in the movie.

Now that the long wait is over and fans can finally bask in the super-sized, superhero brawl that is Captain America: Civil War, some may overlook something really special about this movie.

It has three black superheroes on the front lines.

"I just want to consider all our options," Falcon says in a clip from Civil War that played endlessly in preview trailers and commercials. "Because people that shoot at you usually wind up shooting at me, too." 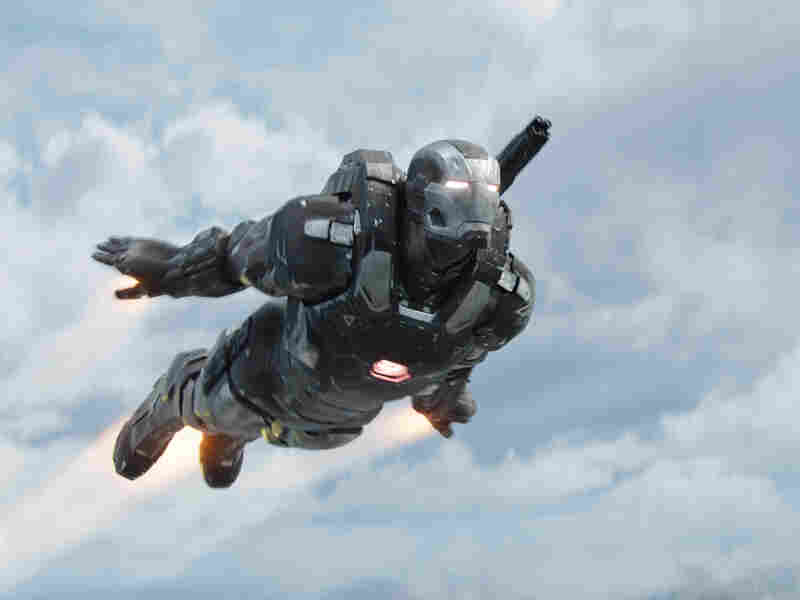 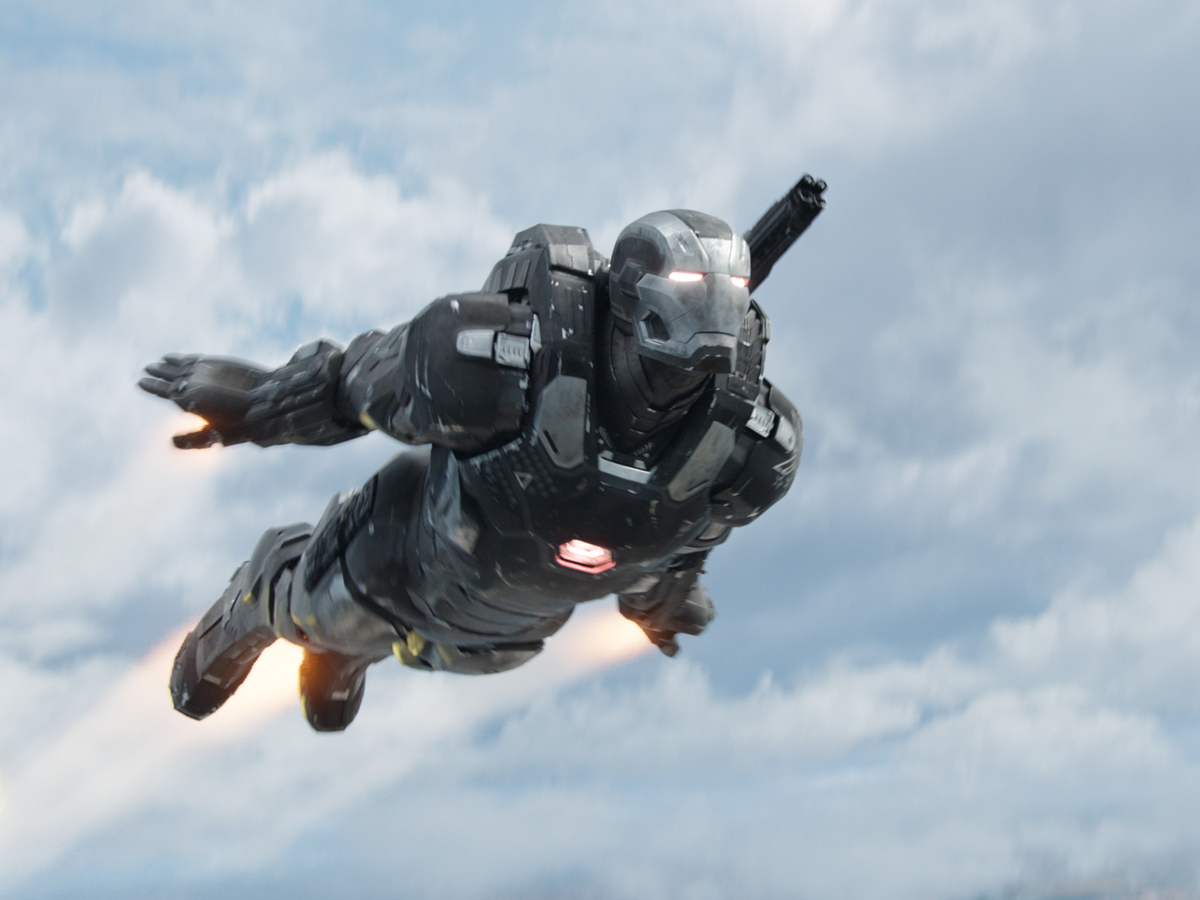 Given all the criticism recent superhero movies have faced for featuring mostly white males, this may seem like a decisive rebuttal. But Nate Moore, an executive producer of the film, says the lineup of non-white superheroes was a coincidence of storytelling.

"I don't think at any point did we feel, 'Well this is going to seem like a political move on our part, or this is part of a larger trend,'" Moore says. "It's sort of us as people in Hollywood catching up to the images people want to see."

As Moore explains, movies the size of Civil War cost a lot — reported budget, $250 million — and getting Hollywood to believe that movies featuring superheroes of color could be successful on that level has taken time.

Moore says it was his idea to introduce the Falcon as Captain America's best friend and backup in the previous movie, Winter Soldier. He had grown up reading comics featuring the two and always figured it was a natural pairing. 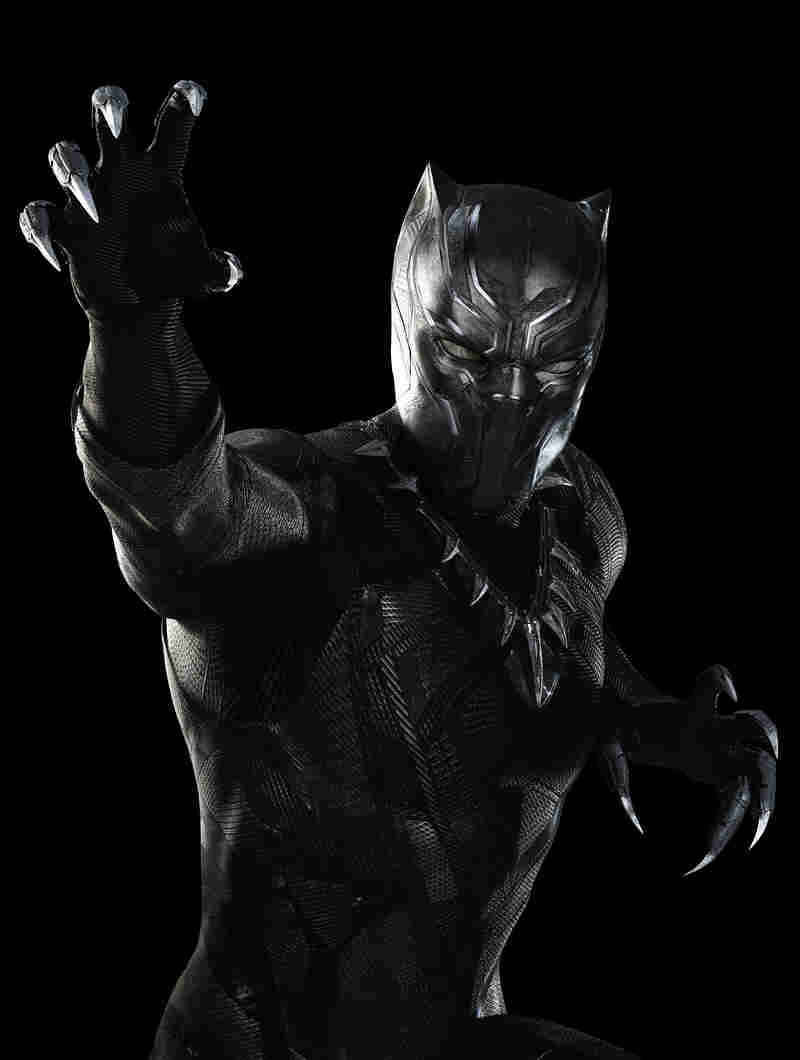 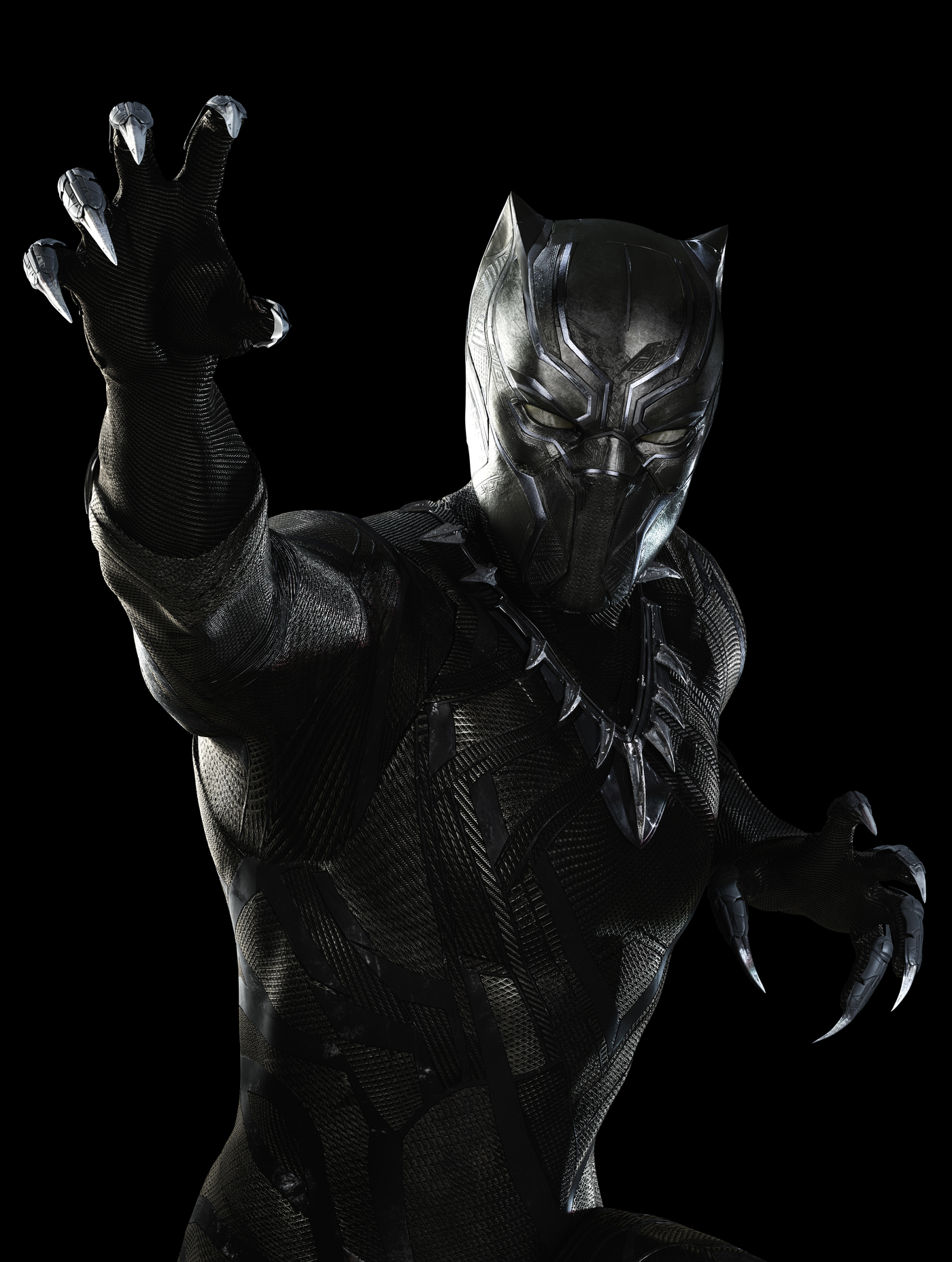 Chadwick Boseman's Black Panther debuted in Captain America: Civil War. He'll get his own movie in 2018.

And he says Black Panther debuts in Civil War in a similarly pivotal role. He's the ruler of a super high-tech African nation who stands equal to Iron Man and Captain America. That's a level of independence we haven't seen in black characters from recent big budget superhero movies.

"We kind of think of [Black Panther] as Obama, if Obama was also James Bond," he says, laughing. "He has to lead a country, but also has to be that country's best fighter ... He has to go into real dangerous situations and solve them. He's not just going to do that by punching people in the face. He's going to use political savvy, he's going to be clever, and he's going to be ingenious."

And he's not alone. In fact, 2016 is shaping up to be the Year of the Black Superhero.

Other black or biracial superheroes we'll see in TV and film this year include Will Smith playing Deadshot in the upcoming Suicide Squad movie, Alexandra Shipp as Storm in X-Men: Apocalypse and Mike Colter as Luke Cage in Netflix's TV series of the same name.

Many of these characters could be considered sidekicks or supporting characters, which is often an issue. But there's a Panther movie planned for 2018 and the Cage TV series, placing superheroes of color center stage.

Brian Michael Bendis is a comic book, TV and film writer. He wrote the comic book storyline in which a half-Hispanic, half-black 13-year-old takes over as Spider-Man. 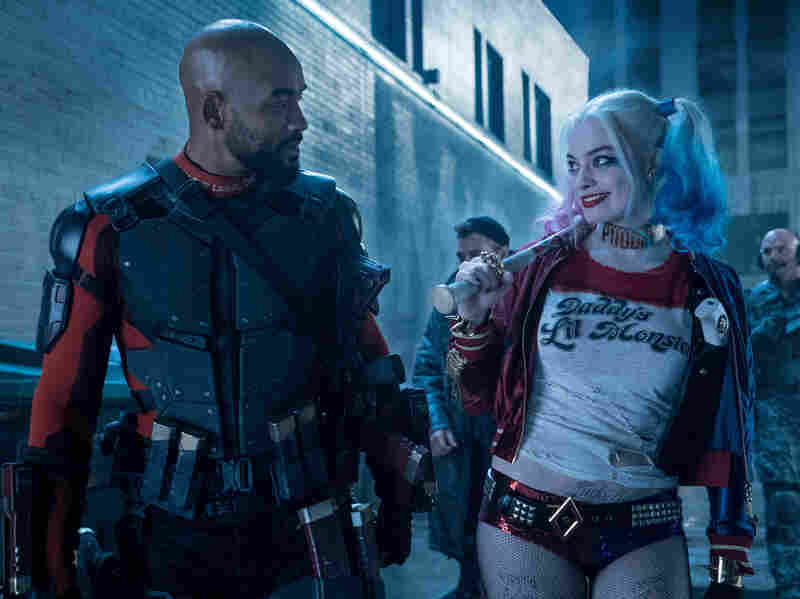 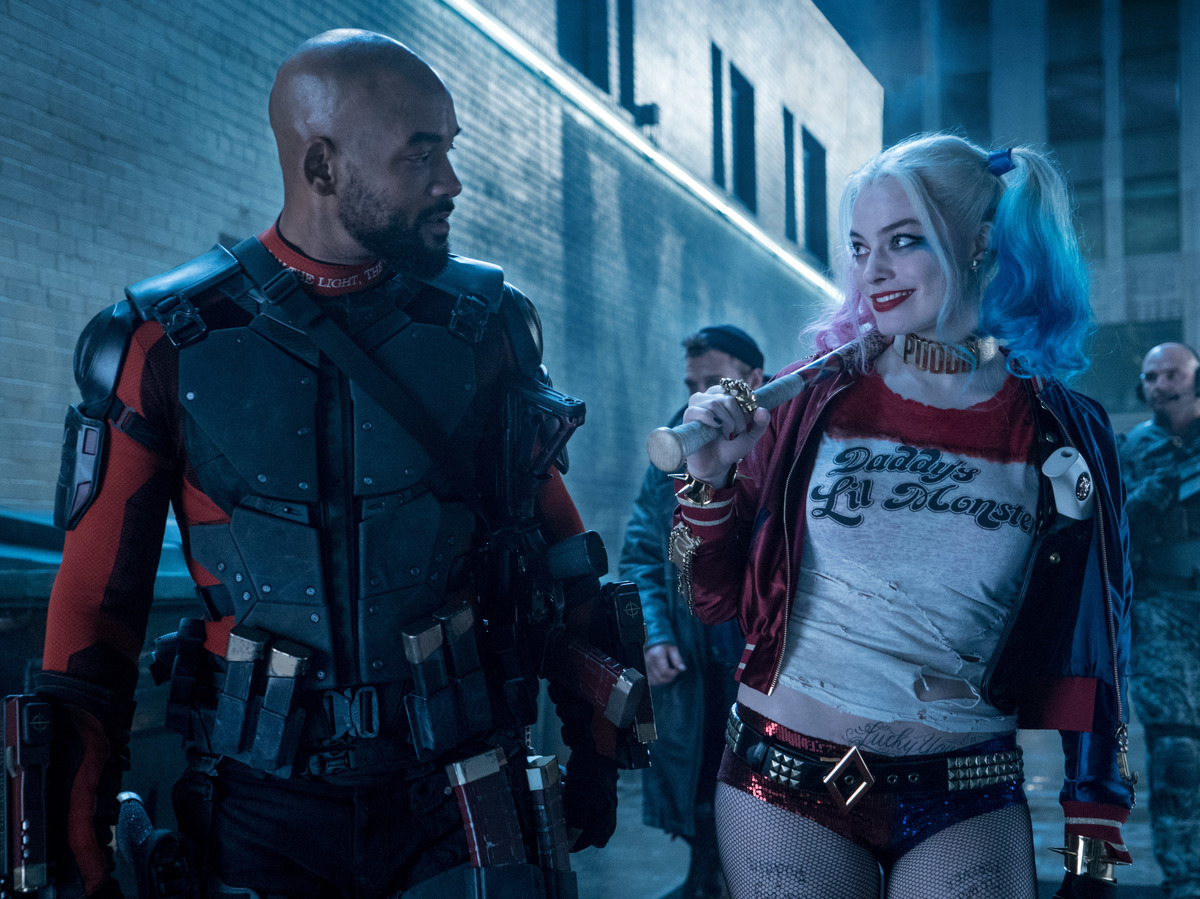 Will Smith stars as Deadshot, alongside Margot Robbie's Harley Quinn in the upcoming Suicide Squad movie.

Bendis says it's about time movies and TV shows caught up with the diversity of current comic books.

"It's ridiculous that every superhero [in film] was a white man who is 30 years old," he says. "It's completely unrealistic. It's not the world we live in."

Years ago, the comics industry pushed to diversify characters, fearing comic audiences had become too insular — in danger of becoming mostly the province of 30-something white males.

Bendis said changing the ethnicity of Spider-Man came from a simple question: Does the character really have to be white?

"The kid lives with his aunt ... he's a science nerd ... there's really not a reason that kid should be white," he says. "And it took off. It's quite shocking how eager the fans were for it."

The Black Panther first appeared in comic books in 1966. He was the first black superhero in modern comics, a character who felt like a nod to the civil rights movements of the time. 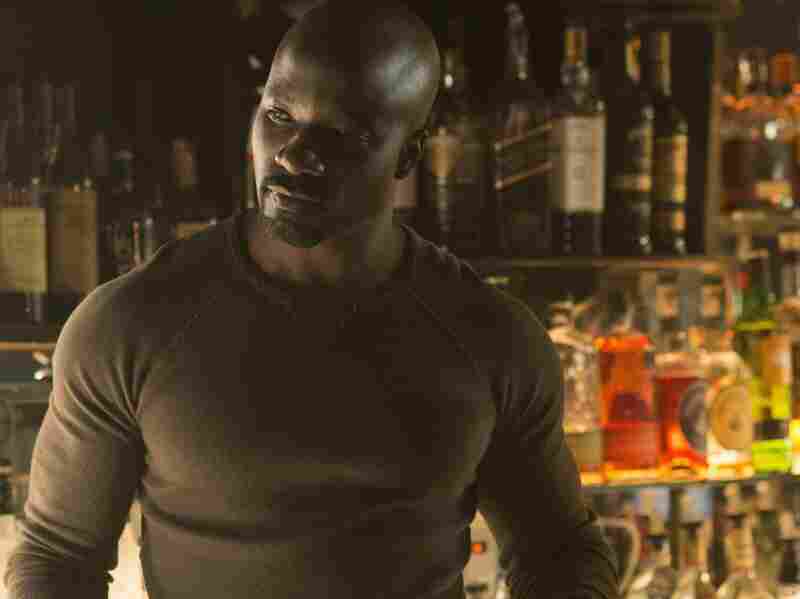 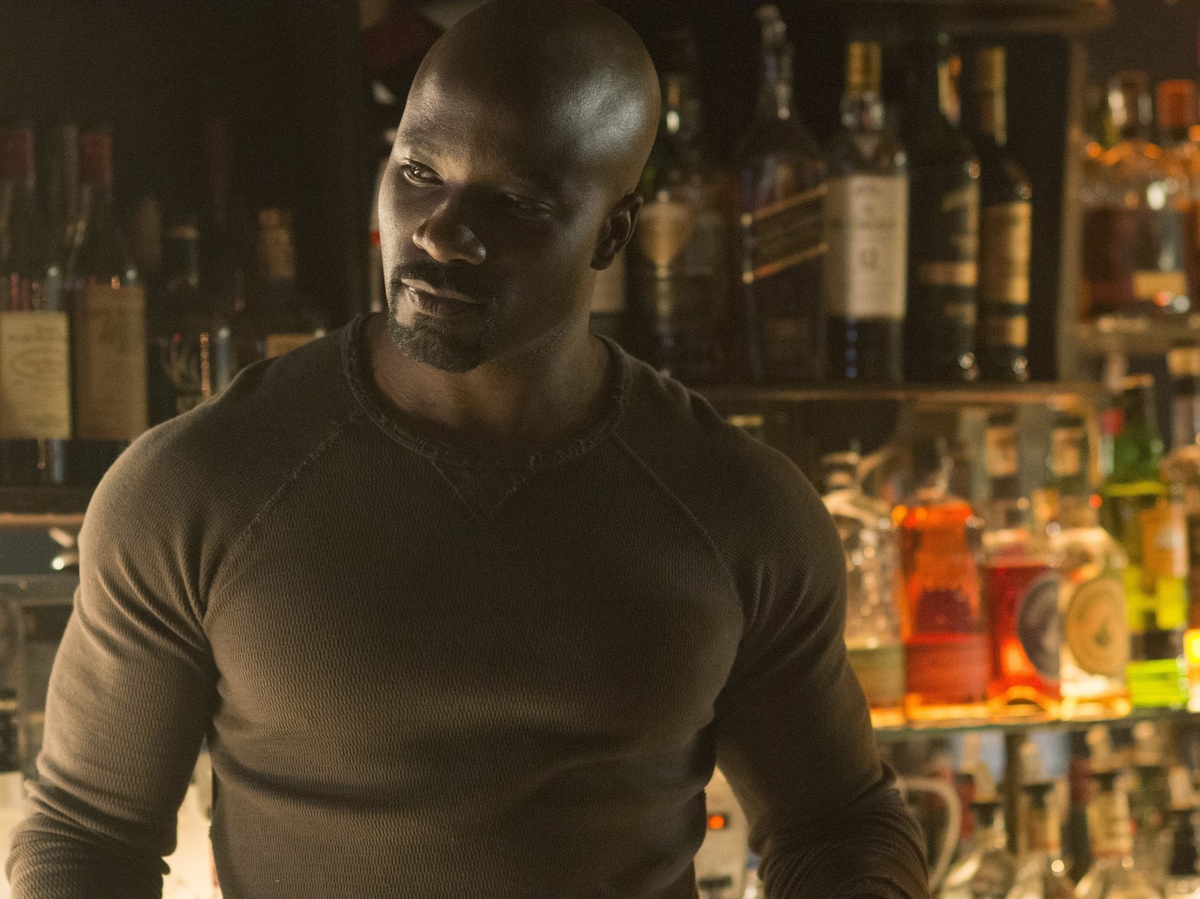 Luke Cage, who appeared in Marvel Comics six years later, was originally a wrongly-convicted prison inmate given unbreakable skin by an experiment. His style was influenced by blaxploitation films like Shaft and Superfly.

But with a Black Panther movie coming and the Cage series debuting in September, the question remains: How will the characters be reinvented for today's times?

In the comics, Storm is the daughter of a princess from Kenya, powerful enough to lead the X-Men. But the X-Men movies have always positioned Berry's Storm as a supporting character hardly reflecting her African heritage.

"Hollywood has a huge colorism problem — huge — especially when it comes to black women," Broadnax says. "And now we're seeing the new [younger] Storm in Apocalypse ... I think she's basically a baby version of Halle Berry... we have another light-skinned Storm."

Hollywood has misfired in the past with superhero films starring black characters, including the last two Blade movies with Wesley Snipes, Shaquille O'Neal in the B-movie Steel and the other superhero role Halle Berry took on — Catwoman.

Still, as increasingly diverse audiences demand superhero films and TV shows that better reflect their world, the pressure will only grow for projects like the Black Panther film and Luke Cage series to deliver high-quality, groundbreaking characters.