Accessibility links
Not My Job: Actress Rachel Bloom Gets Quizzed On Crazy Ex-Boyfriends Since she's the creator and star of the show Crazy Ex-Girlfriend, we've invited Bloom to answer three questions about some notorious crazy ex-boyfriends. 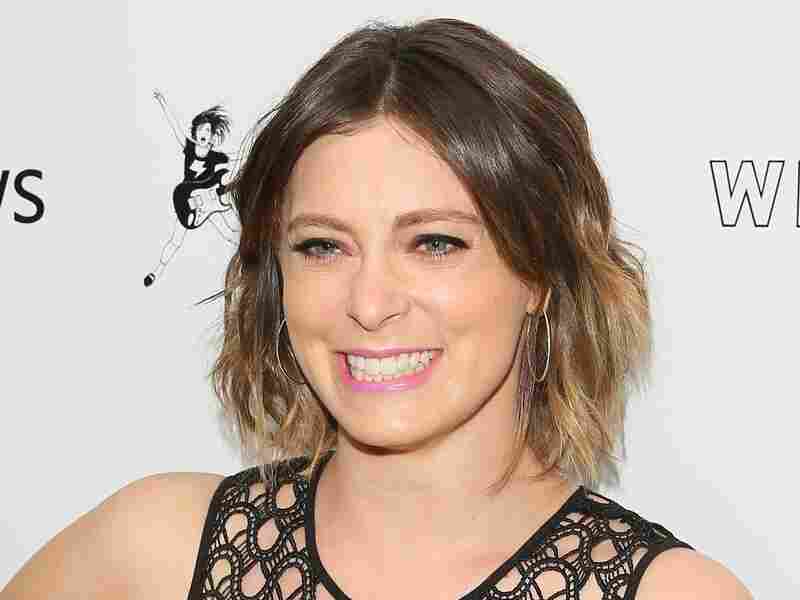 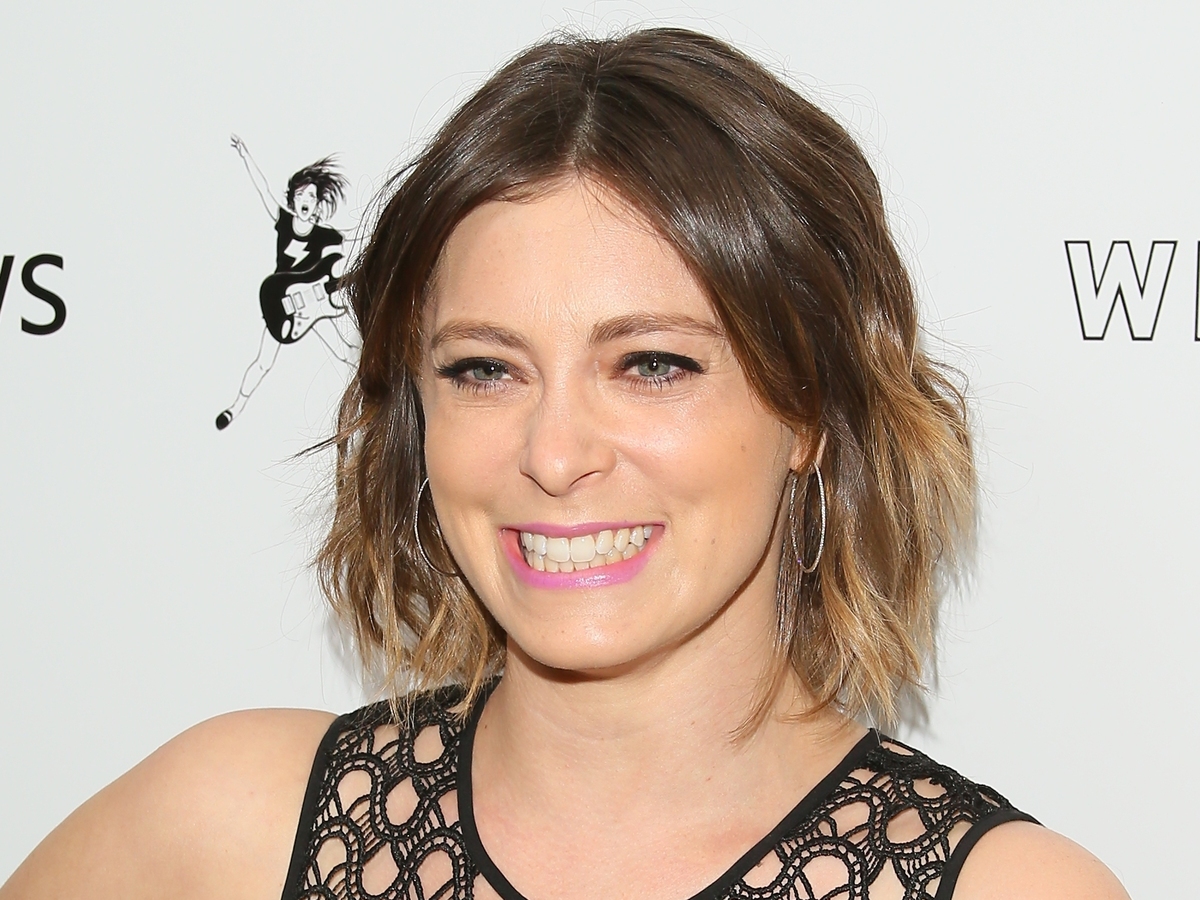 Rachel Bloom is the star, writer and co-creator of The CW show Crazy Ex-Girlfriend. The singer-songwriter first got famous with her hilarious musical numbers on YouTube, before she was given the chance to create her own TV show that let her play a lunatic stalker character loosely based on herself. She's already won a Golden Globe for that role in Crazy Ex-Girlfriend.

Since she's the expert on crazy ex-girlfriends we've decided to ask her three questions about some well-known crazy ex-boyfriends in a game called "No! Really! This time I'll change!"

And now the game where we ask people who do great things to do something silly. It's called Not My Job. So singer, actress and songwriter Rachel Bloom first got famous with her hilarious music video numbers on YouTube. And she was given the chance to create her own TV show. So she did what anybody would do, which is to say to them let me play a lunatic obsessive stalker vaguely based on myself. It will be great. And the funny thing is she was right. She's already won a Golden Globe for her show "Crazy Ex-Girlfriend." Rachel Bloom, welcome to WAIT WAIT... DON'T TELL ME.

RACHEL BLOOM: Thank you. Oh my gosh, I wish I could experience that audience for realsies.

SAGAL: I wish you could, too, because they are extremely attractive.

SAGAL: They are. So I want to be fair, I just started watching your show this week, and I find it hilarious. But did I describe it accurately? It's about - your character who you play, Rebecca, is a obsessive stalker of her ex who's vaguely based on you and your life?

BLOOM: Yeah. I mean, I'd like to think it's an emotional autobiography. The show is about one person's search for happiness and how she conflates obsessive love with that. And she's wrong.

BLOOM: And so in some sense, she's like this bubbly Walter White. Like, you know she's wrong the whole time.

SAGAL: I love that - she's a bubbly Walter White.

SAGAL: She's Walter White except she's female, played by you and breaks into song because this is the great thing about the show if you haven't heard that every show you have up to three original musical numbers, right?

SAGAL: It's funny. Were you always one of those people who wished that life were a musical so when you were sad you could just burst into song and there'd be a backing band in the closet?

SAGAL: So you first got noticed with this YouTube video, a song I cannot say the name of. But it is about wanting to have sex with one Ray Bradbury, the famous science-fiction writer.

O'ROURKE: Wow, here or on Mars or where?

SAGAL: You did this when you were, like, a starving-artist type person just out of school and you wanted to do something cool and make your mark. And you spent, like, all your money on it, is that right?

BLOOM: Yeah. Well, I knew I wanted to be kind of my own one-person sketch group. And I had been going through a breakup. And I was reading - rereading "The Martian Chronicles," which is still my favorite book. And I was realizing that what Ray Bradbury does and one of the reasons I love reading him is he uses high concepts - these science-fiction fantasy concepts to really explore emotion and how - the interactions but between living beings and...

SAGAL: OK, now this - all right, I read Bradbury. You're absolutely right. He was an amazing - he was an underappreciated American master...

SAGAL: But I did not read or reread "The Martian Chronicles" and say I'm going to do a - I'm going to proposition the man in a music video.

SAGAL: So tell me how you get from, like, yeah, "The Martian Chronicles," a wonderful...

SAGAL: ...Book, I'm so glad I like it to dressing doesn't up like Britney Spears and leering at a camera and making incredibly indecent suggestions to Mr. Bradbury.

BLOOM: OK, so I at the time had been writing a lot of sketch comedy. And when you think of a funny idea, you kind of immediately want to think of a sketch. And I was like, oh, it would be funny to do, like, a sexy love song about Ray Bradbury. And I wrote out a rough version on the piano, and then I forgot about it for a year and a half. And when I graduated from school and I wanted to make my mark and kind of be my own one-person sketch group, I was, like oh, that song could be a really funny, like, first internet video for me. So I didn't realize how much people would emotionally connect with the video, and it went super viral in a way that I hadn't predicted. And it got me, like, noticed and representation and...

BLOOM: ...Everything a young actor ever wants.

SAGAL: If you're listening to this on a podcast, I want you to pause it, watch the video and come back.

SAGAL: All right, so Rachel, the video is a proposition.

SAGAL: It's in the second-person imperative to Ray Bradbury. Did Ray Bradbury ever respond to your suggestion?

BLOOM: It was not (laughter). But no, I met him and, like, I dressed (laughter) to be ultimately so respectful. He liked the video, but I want to be respectful. So I just - I wore, like, my most conservative outfit. I wore my glasses, and I just asked him about his books the whole time. I...

HONG: Oh, Rachel, you could have done it with Ray Bradbury.

BLOOM: But I - no, instead I was boring and I just asked him about his books the whole time, like a dork.

BLOOM: It was a very, like, wonderful respectful conversation, and I'll remember it for the rest of my life because he is just really a terrific - was a terrific, brilliant author.

SAGAL: And here I am trying to make it all sordid. I'm sorry.

BLOOM: Yeah, what are you doing? God, someone makes a video about wanting to have sex with Ray Bradbury, and you've got to make it all gross?

SAGAL: Well, Rachel Bloom, we are delighted to talk to you. We've asked you here to play a game we're calling...

SAGAL: You're the expert, obviously, on crazy ex-girlfriends. So naturally, we decided to ask you about crazy ex-boyfriends - just as funny, sometimes dangerous.

SAGAL: Answer two of these three questions correctly and you'll win a prize for one of our listeners - Carl Kasell's voice on their voicemail. Bill, who is Rachel Bloom playing for?

SAGAL: Here's your first question - men find ways and places to complain about their exes all the time. When did a guy named Kary Mullis manage to vent his feelings about his ex? Was it A, in his wedding vows to his new wife, B, in his Nobel Prize acceptance speech, or C, during his play-by-play of game seven of the Stanley Cup finals?

SAGAL: No, you were on the right track. It was actually during his Nobel Prize acceptance speech.

BLOOM: I was going to guess that. Oh, man.

SAGAL: Kary Mullis won the Nobel Prize in Chemistry. He's the guy who made all this DNA testing possible with his discovery.

SAGAL: In the speech describing this discovery, he kept mentioning his ex-girlfriend Jennifer, as in - and I quote him - "on the increasingly numerous days when she hated me, my ideas and I suffered her scorn together," unquote.

SAGAL: It is truly the most technically impenetrable and saddest Nobel Prize acceptance speech you will ever read.

BLOOM: That's unbelievable. What year was that?

HONG: Was he not the daddy? Is that why he was so mad?

O'ROURKE: That would be a good guess.

HONG: Yeah. He was not the daddy.

SAGAL: Next question - Brandon Preveau of Chicago is one of the world's worst and most inventive ex-boyfriend's. In 1999, he did what? A, he gave $50,000 to an animal shelter here in Chicago on the condition they name each and every dog after his ex...

SAGAL: ...B, he created a Yelp account in her name and gave horrible reviews to her favorite bars and restaurants so she would be banned, or C, he parked his ex-girlfriend's $600 1999 Chevy Monte Carlo at O'Hare Airport and left it there long enough to rack up $100,000 dollars in parking tickets.

SAGAL: You're going to go with C. And you're right.

SAGAL: You asked, how come she never noticed her car was missing? That's because what he did was he bought a car, registered it in her name without her knowledge...

SAGAL: ...And parked it at O'Hare to leave it there to rack up tickets...

SAGAL: Isn't it, though?

SAGAL: It is. All right, here's your last question. You can win it here. When a woman named Maggie Grace was having trouble with an ex who would not just go away, what did she do? A, she started a podcast which was just her reading from her diary about him called I'll Stop When You Stop...

SAGAL: ...B, she enlisted the guy's mother, his three sisters, his seventh-grade teacher and four of his other exes to stage a public intervention, or C, she got Liam Neeson to call him and leave a threatening message in his character from the movie "Taken."

SAGAL: I'll give you a hint. The name of the person, Maggie Grace, is a bit of a clue.

BLOOM: Oh, is it a podcast?

HONG: Maggie Grace is the name of the actress who plays Liam Neeson's daughter in "Taken."

HONG: But you didn't hear it from me.

BLOOM: So I didn't know that. So now, you know, after thinking about it...

SAGAL: Bill, how did Rachel Bloom do on our quiz?

KURTIS: Rachel got (singing) one wrong and two right.

KURTIS: (Singing) And of course, Helen got one of those.

SAGAL: Rachel Bloom is the star, writer and co-creator of "Crazy Ex-Girlfriend," which you can see Monday nights on the CW. Rachel Bloom, thank you so much for joining us.

(SOUNDBITE OF SONG, "GIRLFRIEND IS BETTER")

TALKING HEADS: (Singing) I've got a girlfriend that's better than that? She has...

SAGAL: In just a minute, Bill sits atop a golden throne. It's our Listener Limerick Challenge. Call 1-888-WAIT-WAIT to join us on the air. We'll be back in a minute with more WAIT WAIT... DON'T TELL ME from NPR.