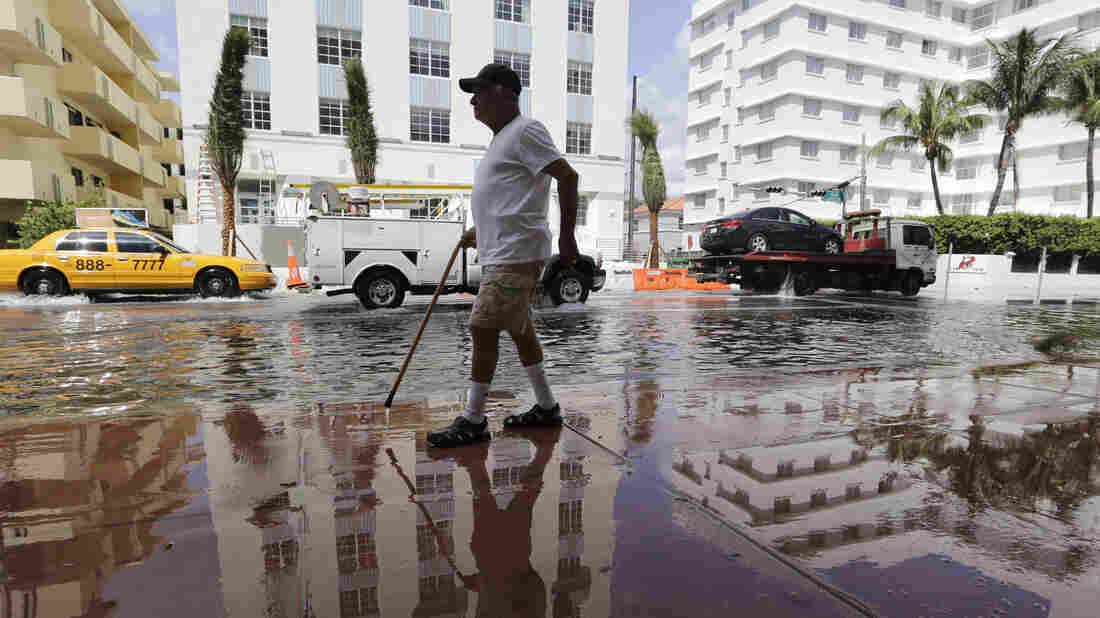 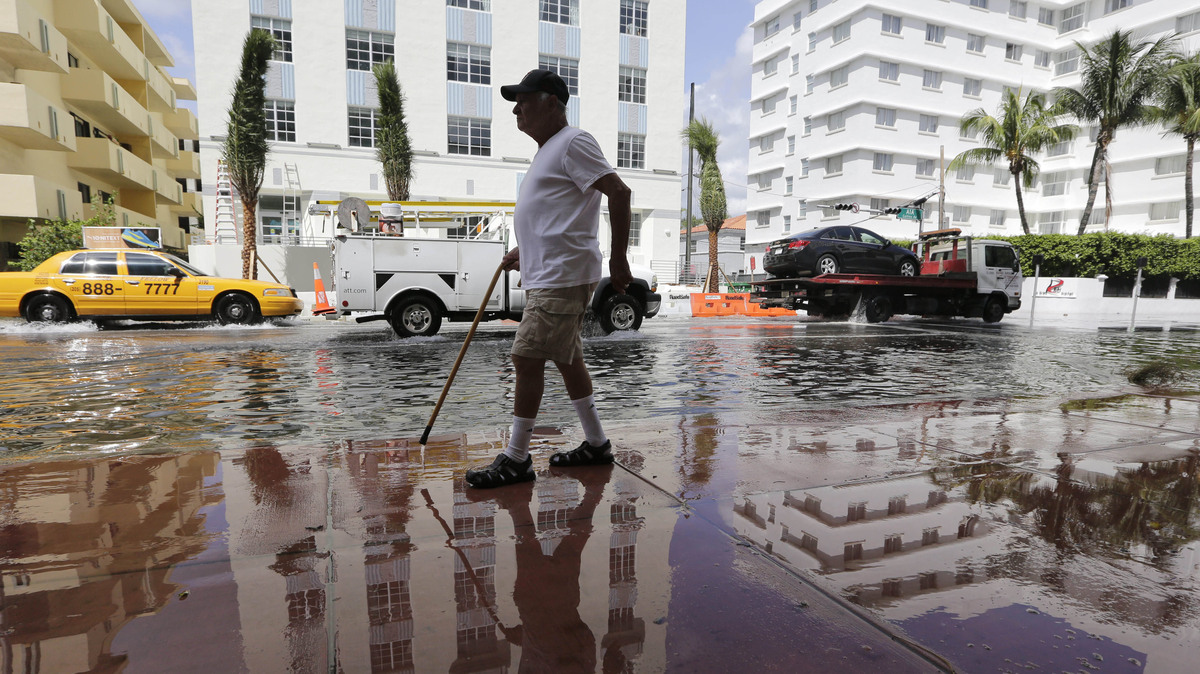 Louis Fernandez walks along a flooded Collins Avenue in Miami Beach in September 2015. The city is tackling sea-level rise by rebuilding roads and installing new storm sewers and pumps.

Miami Beach is one of the nation's cities most vulnerable to climate change — and its leaders are doing something about it. The city, a national leader in addressing climate, has begun to make improvements aimed at protecting residents from rising sea levels.

In South Florida, the rate of sea-level rise has tripled over the last decade, according to a new study from the University of Miami. The rising seas raise questions for many about whether the resort community has a future. Officials there say the answer is emphatically yes and they're moving ahead with plans for a resilient city.

The small city on a barrier island, just 7 miles long and 1 mile wide, is getting a makeover. Major thoroughfares are being rebuilt, new storm sewers and pumps are being installed. Miami Beach Mayor Philip Levine likes to show off work recently completed in the Sunset Harbor neighborhood on the western edge of the island, "the lowest area of our city," he says, "which of course was developed on muck." 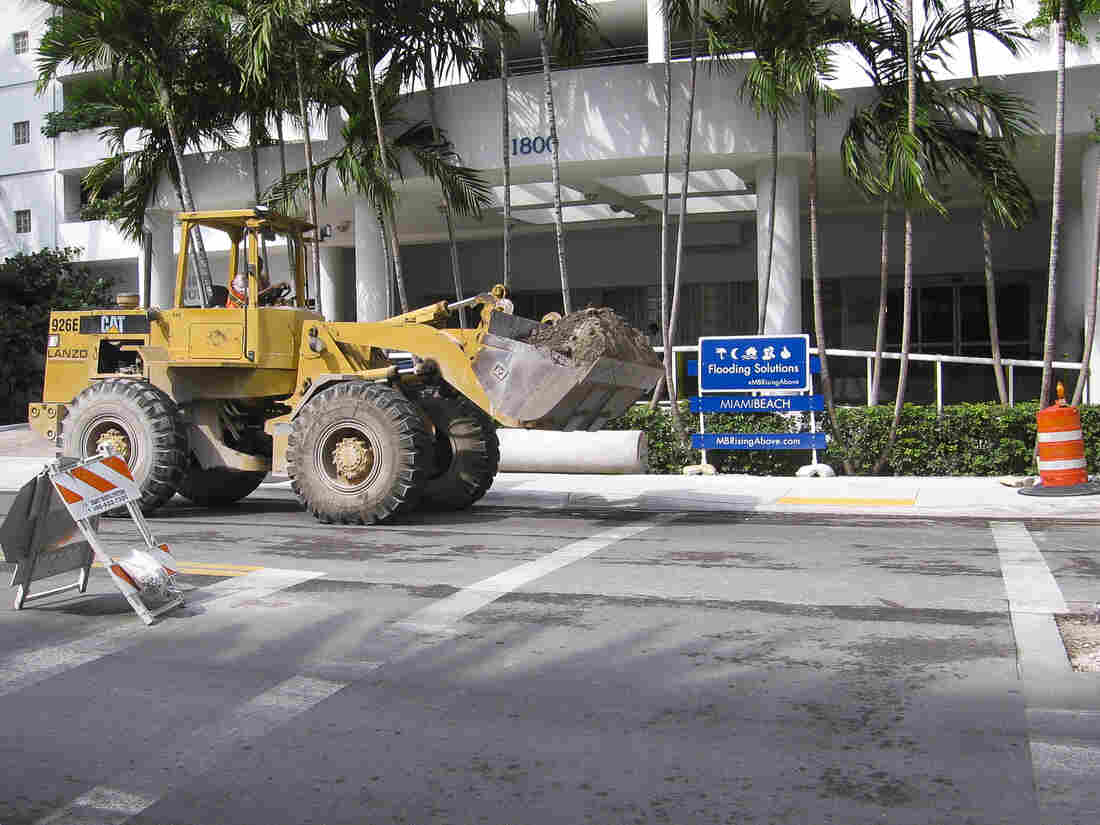 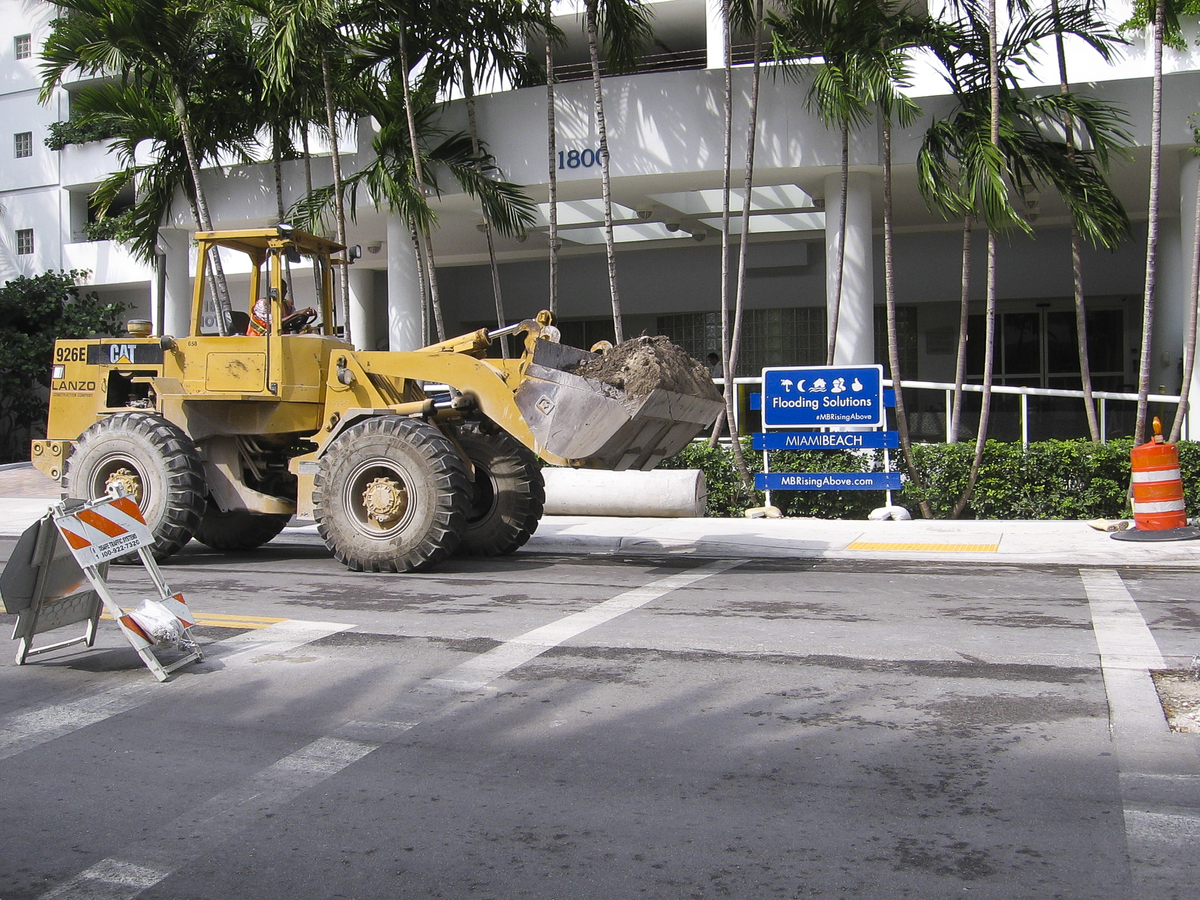 Over the last decade, flooding during high tide in this and other neighborhoods along Miami Beach's western edge has become a regular occurrence. The University of Miami study confirms that the main reason for the increased flood events is sea-level rise. While some elected officials, including Florida's Republican Gov. Rick Scott, aren't ready to acknowledge the threat posed by climate change, here in Miami Beach, it was an issue that helped get Levine elected. "I think I did a campaign commercial in a kayak," he says.

What Can We Learn From Early Floridians On Sea-Level Rise?

Levine took office on a pledge to build a resilient Miami Beach, one that would recognize and adapt to climate change. He holds up Sunset Harbor neighborhood as a model. The patio outside a restaurant and cafe is a cozy spot that's now more than 3 feet below street level. The street was "literally rebuilt, raised and built higher," he says. "And of course major pumps were installed as well. So now you have certain buildings that are lying lower, but the streets are higher." This neighborhood, perennially wet during seasonal high tides, now is dry.

To combat flooding, Miami Beach has launched a $400 million project that's begun installing as many as 80 pump stations throughout the city. In addition, more roads on the island's low-lying western edge will be rebuilt higher. 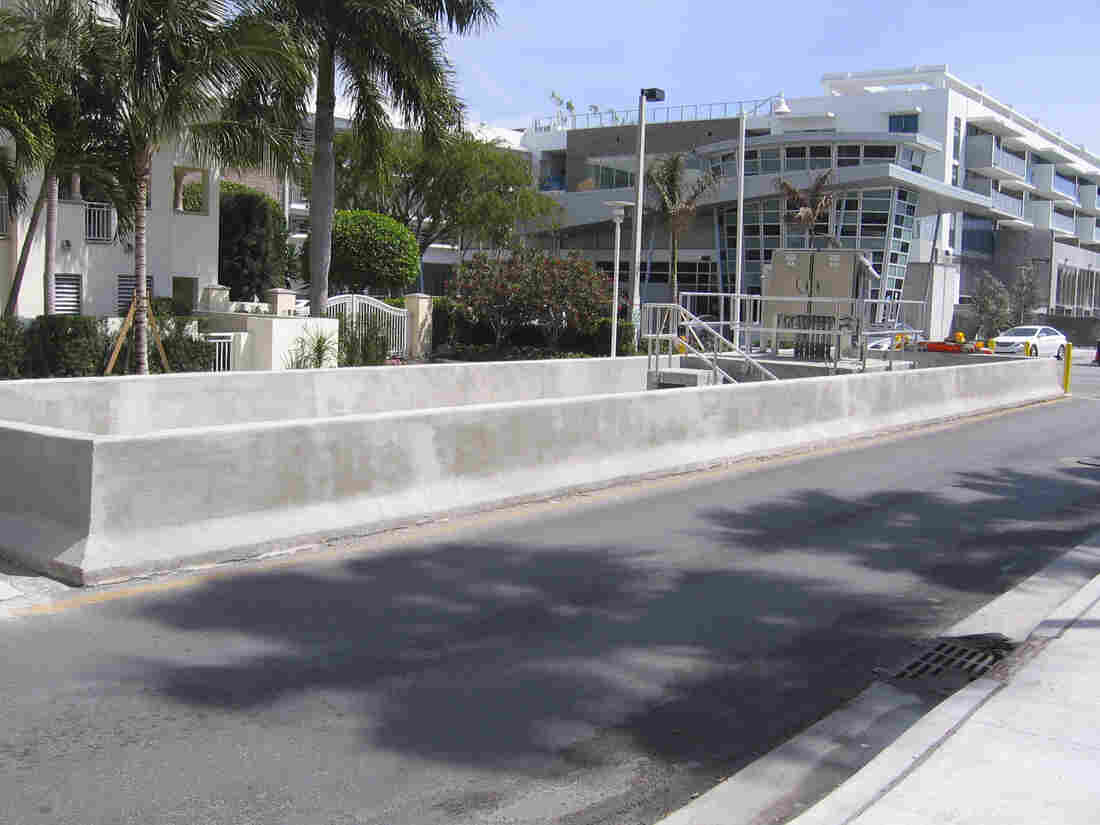 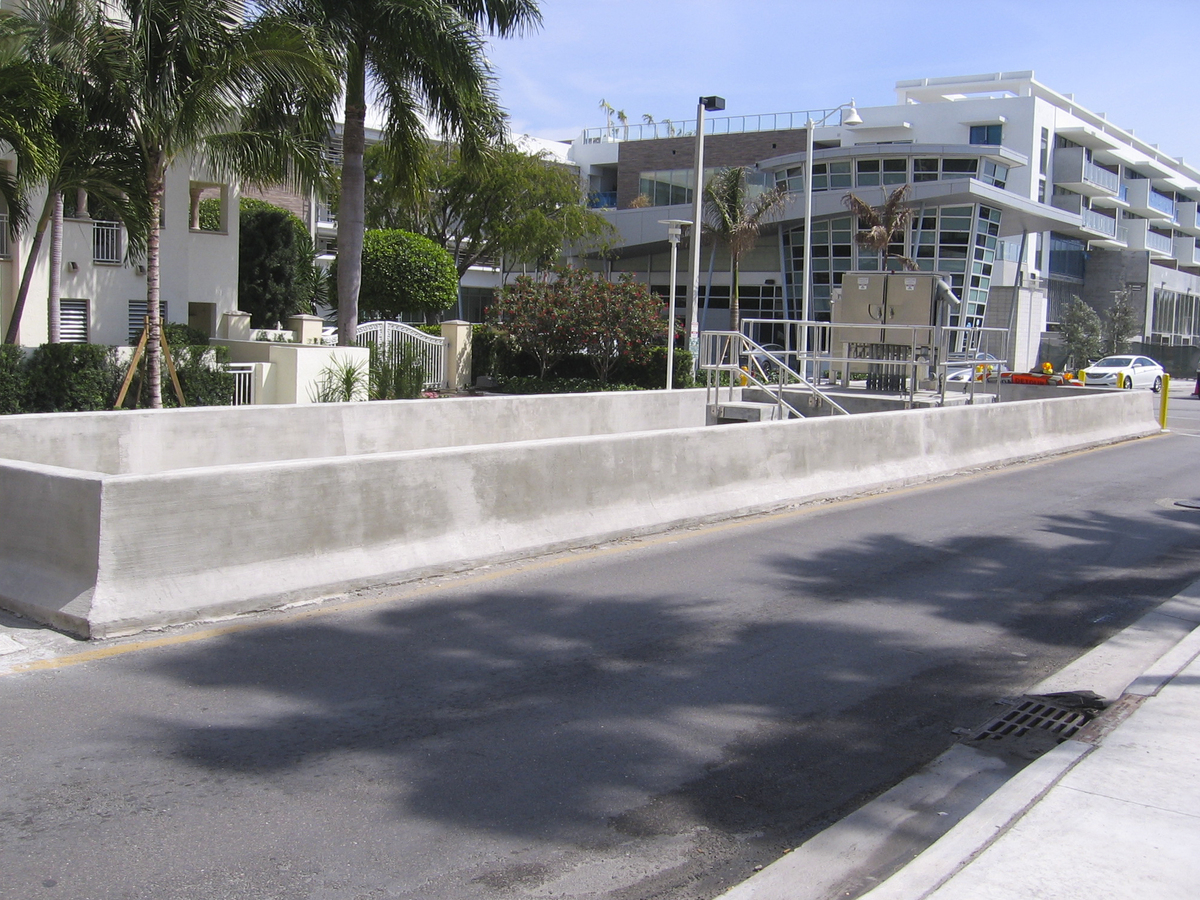 City engineer Bruce Mowry is now focused on Miami Beach's next big project: the reconstruction of Indian Creek Drive, a road that saw severe flooding last year during a seasonal high tide. Former Vice President Al Gore took a tour and later talked about seeing fish swimming in the street there. The street runs alongside a lagoon.

"We had as much as a foot of water over the seawall," Mowry says.

To make sure that doesn't happen this year, he says Miami Beach will rebuild Indian Creek Drive higher and raise the height of the adjoining seawall.

"That seawall will end up being about 4 to 5 feet higher than it is now. Two blocks up here, we're planning on putting in a pump station right here and collecting all the water," he says. It's a $25 million project, and — perhaps surprisingly — after negotiations with the Scott administration, 80 percent of that cost is being picked up by the state of Florida.

We need to set aside sort of the political nonsense about the debate about whether climate change is happening and embrace our problem and start developing comprehensive strategies.

Ben Kirtman, a climate modeling expert at the University of Miami, says it's encouraging the state finally signed on to the project, but it took a lot of negotiation. Kirtman is one of the Florida scientists who have worked to persuade Scott to acknowledge and begin planning for climate change — so far unsuccessfully. Kirtman thinks by working to build a resilient city, officials in Miami Beach are on the right track.

"I'm quite optimistic that there'll be a Miami Beach 50 years, 100 years from now. But we need to set aside sort of the political nonsense about the debate about whether climate change is happening and embrace our problem and start developing comprehensive strategies," he says.

At current rates of sea-level rise, Levine believes the work underway now will buy the city at least 50 years. By then, he hopes innovation may begin providing long-term solutions and make the city a model for the nation. While others see only a gloomy future for low-lying coastal cities, Levine is a picture of confident optimism.

"Look at little Miami Beach — what we're doing and the jobs that we're creating by rebuilding our roads and putting in pumps," he says. "Infrastructure, whether it's building new roads, bridges or public transportation or whether it's making your cities more resilient, is an incredible, positive job grower for our country. So we should grab this challenge and run with it."

Levine and Kirtman say building resilient cities is just the first step. The real challenge is to build the political will to address climate change and slow the rising sea levels before elevated structures, pumps and seawalls are no longer enough.