Accessibility links
Book Review: 'Too Like the Lightning' By Ada Palmer Ada Palmer's dizzying debut novel is dense and complex, packed with philosophy and visions of what life might be like in the year 2424: Radically different, yet based on Enlightenment ideals. 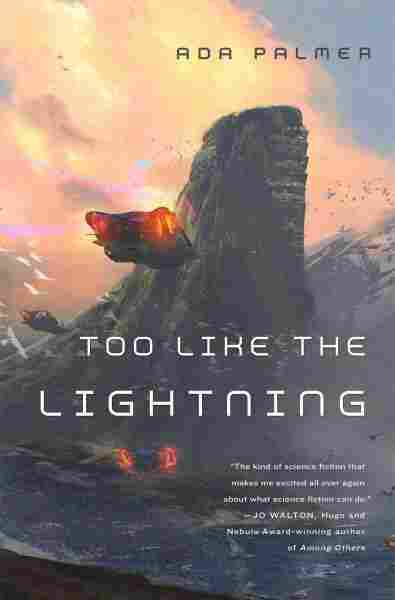 "I am grateful, so grateful, tolerant reader, that you read on," says Mycroft Canner halfway through Too Like the Lightning, Ada Palmer's awe-inspiring debut novel. Yes, Canner addresses the reader throughout the book; as the main character and narrator, he breaks the fourth wall so pervasively that he feels compelled to explain himself. At length. This jarring form of narrative is just one of the many challenging things about Lightning. Dense and complex, the book is a beast. It imagines Earth in the year 2424 as a radically different place, with every facet of society reordered from top to bottom. Ostensibly a utopia, this new world order isn't entirely new; its blueprint is drawn from the philosophies of Enlightenment thinkers such as Diderot and Voltaire, in the same way Canner's narrative frames the tale as if he were Dr. Ralph in Candide.

That said, Palmer's utopian vision of Earth isn't exactly the best of all possible worlds. Rather than nations as we know them, humanity has divided itself into Hives: Masons, Cousins, Humanists, and the list goes on. (Don't worry, there's a handy chart, including a detailed statistical analysis, provided within the story itself.) Advanced transportation allows people to cross the Atlantic in an hour; that system helps facilitate a largely conflict-free arrangement between Hives.

It's an uneasy peace, and a recently stolen document of mysterious importance doesn't help matters any. Nor does Canner, a criminal sentenced to be a Servicer — a person whose punishment requires devoting themselves to helping others — or Carlyle Foster, a holy man in a world where religion must be practiced privately. Making things even more volatile is a boy named Bridger, who has the ability to bring inanimate objects to life — with one of his toys seeming to have an intriguing, cosmically horrifying potential.

The plot is knotty, but it's nothing compared to the tangle of ideas at play. Palmer, a professor at the University of Chicago with a doctorate from Harvard, packs a textbook's worth of learning into Lightning. Historical references abound, as do bits of economics, genetics, and sociology. Politics, though, lies at the heart of the book. The world Palmer creates is extraordinarily intricate, with forces and organizations forming a delicate web of tenuous coexistence.

Like the Enlightenment from which it draws inspiration, 'Lightning' is in awe of the fundamental questions of human civilization, chief among them: Can society be engineered? And if it can, should it?

It's a thrilling feat of speculative worldbuilding, on par with those of masters like Gene Wolfe and Neal Stephenson. Her eye for political dynamics goes all the way down to the personal: Gender-specific pronouns are considered obscene and have become taboo. Yet as Mycroft tells the story, he consistently uses gendered pronouns — unreliably, it turns out — and what seems at first to be a minor detail winds up having more profound consequences. Not to mention plenty important to say about our current debate on the issue.

Lightning is dizzying, and not always in a good way. Despite its frenetic intelligence, the first half of the book is bogged down by too much, too fast. It takes some work to get used to, but it's worth it. As Mycroft warns the reader at the start of the book, his narrative is written "in the language of the Enlightenment, rich in opinion and sentiment" — but all those philosophical musings and discursive asides serve a subtle purpose, especially when Palmer starts dropping bombshells about the characters. The pace picks up considerably by book's end, and it becomes clear how much fun Palmer is having with her orchestrated onslaught of concepts, characters, language, and plot. It's a genius kind of energy, and it's infectious.

The biggest drawback is the ending: Lightning is the first in a series, and it ends abruptly. The next book, Seven Surrenders, is due in December. That may be just enough to fully savor and digest this first installment, a novel that's one of the most maddening, majestic, ambitious novels — in any genre — in recent years. Like the Enlightenment from which it draws inspiration, Lightning is in awe of the fundamental questions of human civilization, chief among them: Can society be engineered? And if it can, should it? Palmer doesn't answer those questions, but she frames, ponders, and dramatizes them as only the greatest science fiction writers can.