Accessibility links
As U.S. Attitudes Change, Some Evangelicals Dig In; Others Adapt America's culture war is being fought inside evangelical Christian circles. Some are resisting secular society's trends that conflict with biblical teaching. Others have found a way to live with them. 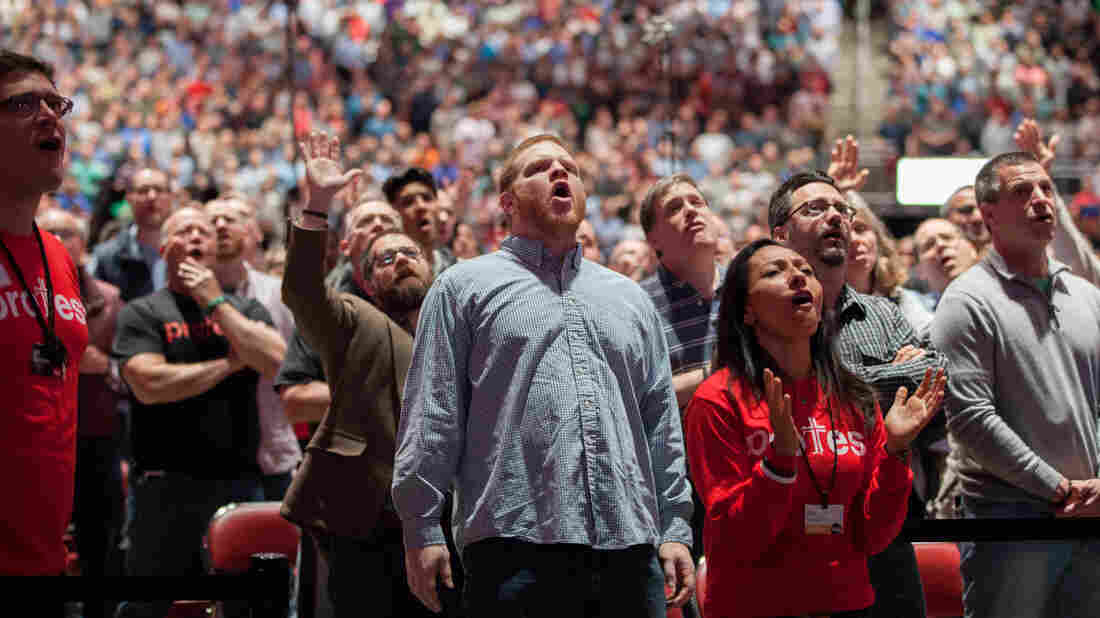 The audience at last month's Together for the Gospel conference in Louisville, Ky. Sarah Mesa Photography hide caption 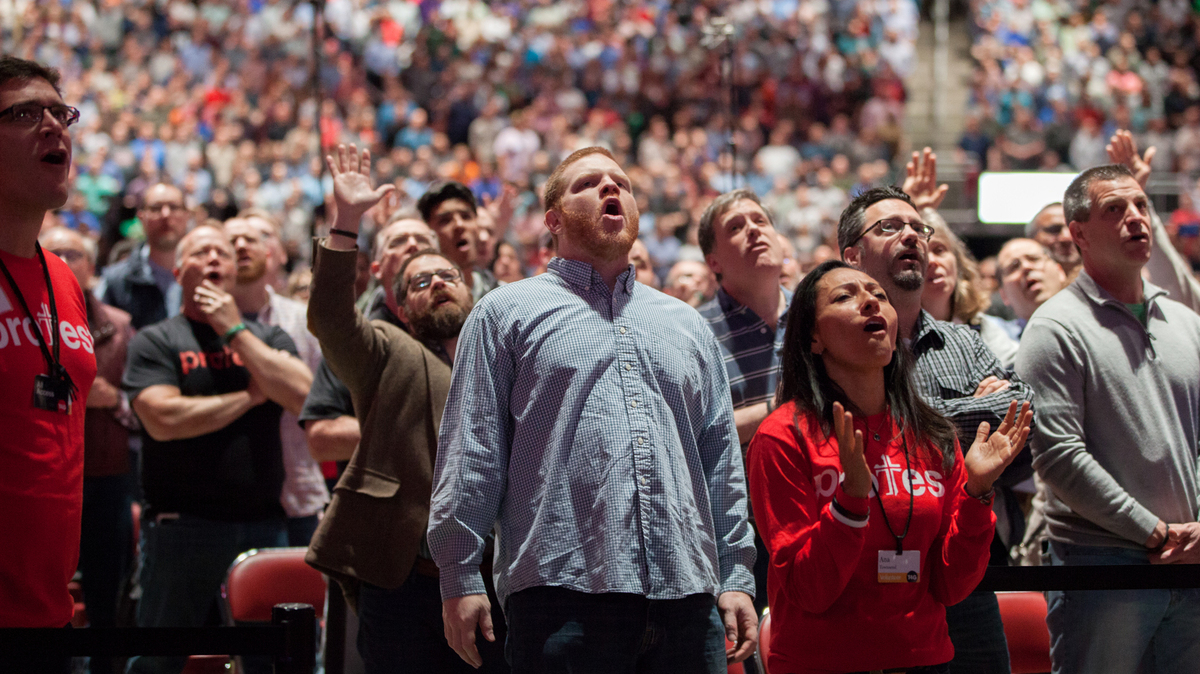 The audience at last month's Together for the Gospel conference in Louisville, Ky.

America's culture war, waged in recent years over gender roles, sexuality and the definition of marriage, is increasingly being fought inside evangelical Christian circles. On one side are the Christians determined to resist trends in secular society that appear to conflict with biblical teaching. On the other side are the evangelicals willing to live with those trends.

For Albert Mohler, president of the Southern Baptist Theological Seminary in Louisville, Ky., the key question is "whether or not there is a binding morality to which everyone is accountable."

Mohler is a co-founder of the biannual Together for the Gospel conference, which brought together thousands of evangelicals last month at a sports center in Louisville, a few miles from the Southern Baptist campus. Electronic signs around the top of the arena carried such messages as "We Were Born Out of Protest" and "We Stand on Scripture Alone, Not Man's Wisdom."

"Our theme for this year is, 'We Protest,' " Mohler tells NPR. "You might say [it's] putting the 'protest' back in Protestantism." He and his fellow conservative leaders urge Christians to take a "biblical" stand against such things as no-fault divorce, extramarital sex, "transgenderism" and gay marriage. His new book is We Cannot Be Silent: Speaking Truth to a Culture Redefining Sex, Marriage, & the Very Meaning of Right & Wrong.

Mohler and other conservatives are pushing against strong headwinds, however. Survey data show that the number of Americans who think divorce is morally acceptable has increased significantly in recent years, while disapproval of homosexuality and same-sex marriage has declined sharply. (Click to see changing attitudes on homosexuality and same-sex marriage by religion.) The latter holds true even for white evangelicals, among the groups most resistant to LGBT rights. For church leaders like Mohler, the challenge is unmistakable. 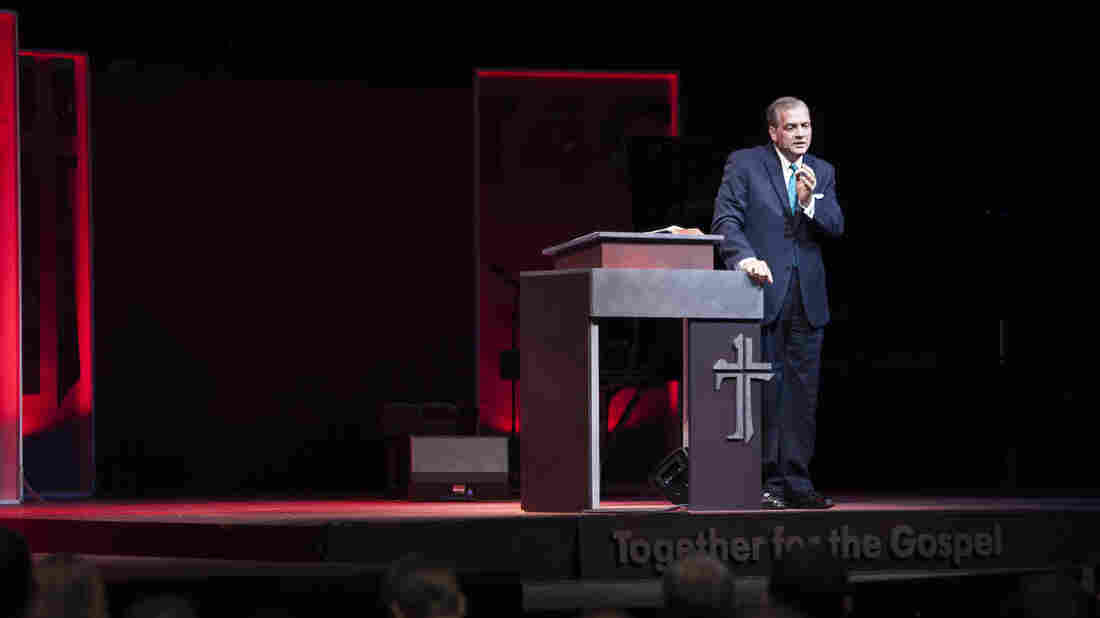 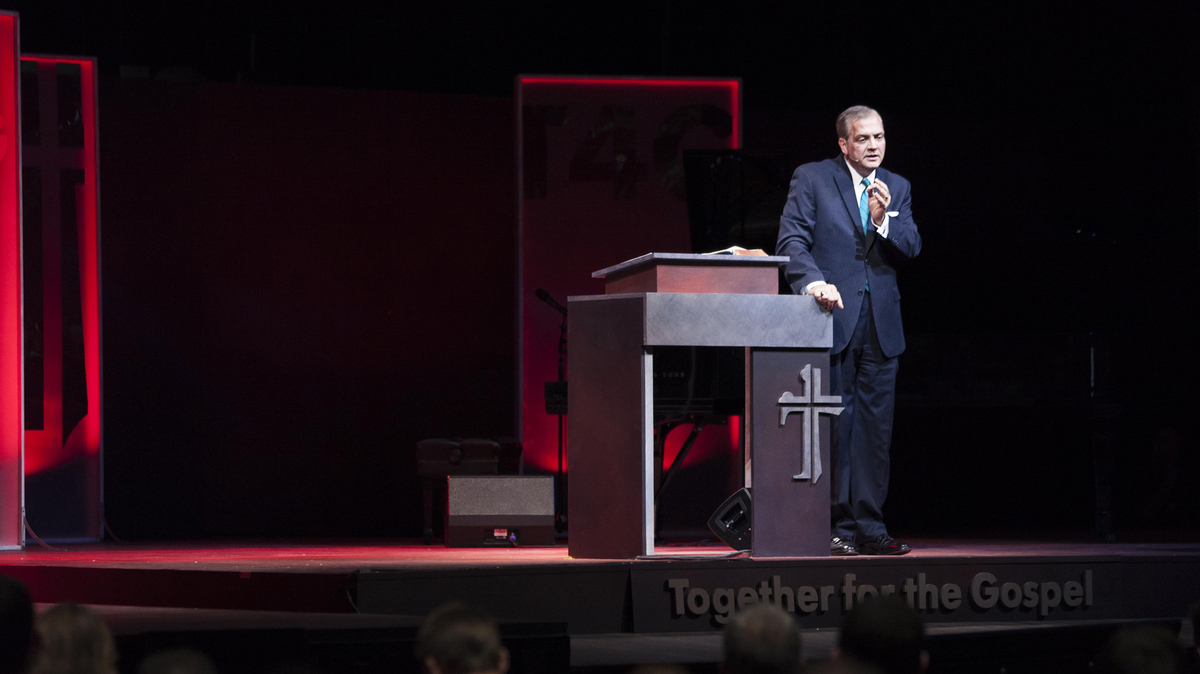 Albert Mohler, president of the Southern Baptist Theological Seminary, is urging conservatives to put the "protest" back in Protestantism.

"Conservative Christians in America are undergoing a huge shift in the way we see ourselves in the world," Mohler says. "We are on the losing side of a massive change that's not going to be reversed, in all likelihood, in our lifetimes." In his view, Christians must adapt to the changed cultural circumstance by finding a way "to live faithfully in a world in which we're going to be a moral exception." (It is this goal, Mohler says, that explains the passage of "religious liberty" laws to protect people who want to express their opposition to same-sex marriage or "transgenderism.")

'At Odds With What Everyday People Believe'

Living as the moral exception was the prospect facing the Together for the Gospel attendees. Most were young men training to be pastors in Southern Baptist churches. The Southern Baptists are one of the Protestant denominations that do not ordain women, even as church deacons. Some Southern Baptist congregations do not even allow divorced men to serve as pastors.

We are on the losing side of a massive change that's not going to be reversed, in all likelihood, in our lifetimes.

Many in their millennial generation may reject conservative thinking on social issues, but the young men who choose to be Southern Baptist pastors have full knowledge of the church teachings. Their church mandate is somewhat limited: not to persuade the broader culture of new moral truths but rather to help their own congregants live their lives as a "moral exception" to the rest of society.

"The Bible makes claims about what is right and wrong, and those claims are often at odds with what everyday people believe," says Southern Baptist seminary student Joshua Van der Merwe, 24, of Louisville, during a break between conference sessions. "Christians are called to protest and to witness to what the Bible claims to be right and wrong."

An insistence on strict Bible-based standards of morality may exclude some of those everyday people, however.

For them, one alternative is Ridgewood Baptist Church in a working-class suburb of Louisville. The pastor, Matt Johnson, grew up as a Southern Baptist, but his church is one of a group that broke from the Southern Baptist Convention about 25 years ago. It now serves a diverse congregation, and the men and women who make up Johnson's lay advisory "Dawnings" committee advocate that it opens doors to everyday people.

"Let's offer words of hope," Johnson prayed at a recent Dawnings meeting. "Hope for the future of what could happen here, who could come here and find a place to belong." The committee members included Janney Gilbert, a medical office manager whose son is gay, Estelle Power, a retired former deacon who became involved in the church after a painful divorce, and Janelle Perry, whose mother was the first female deacon at Ridgewood and who now serves as the church's youth director.

"I've been here all my life, and Ridgewood is not the same church we were 40 years ago," Perry says. "Everyone can come. Some people are taken aback by that — [and] women deacons. And we'll let most anybody attend. ... We're just open-armed."

It is not that the church serves highly educated liberals who might be expected to support a progressive agenda. The surrounding community, according to Johnson, is "a conservative area, with a lot of folks who feel disenfranchised. I'd say it represents the new face of poverty."

Economic stress can be hard on marriages, and Ridgewood's membership includes several people who have been divorced. "I don't know what I would have done without this church," Power says. "I felt I was the only person in the world that was going through a divorce."

Now 76, Power says she has found others at Ridgewood whose lives didn't necessarily fit a church ideal. She can relate to them, she says, because of her own experience.

"I've made some friends, just saying hello," she says, "and somebody would say, 'You're so kind.' I said, 'No, I'm just who I am.' But I do think that it makes you a little more humble when you go through something."

Power grew up in rural Kentucky with divorced parents. Her father drank too much but listened faithfully to Baptist preachers on the radio. Having heard bad things all her life about women who divorced, she welcomed the less judgmental attitude at Ridgewood.

"There are people who have stopped going to church because they think that all that church is is a place where you're being condemned," Johnson says, "and where you're just told, 'This is what you have to think.' " Such people, he says, are among those whom he now hopes to reach with his own ministry.

The church's rupture with the Southern Baptist Convention was in a dispute over the role of women. Southern Baptists believe that men and women "complement" each other but are not interchangeable, which is why women are not allowed to serve in prominent church leadership roles.

Mohler says the church position on complementary gender roles may seem outdated but comes straight from the Bible.

"It's an entire pattern of complementarity that we see woven throughout the account of scripture," he says, "from Genesis 1:26-28 all the way to the Book of Revelation. So it's not a minor matter to suggest that the church can somehow just update its understanding of gender. This is where we must be found faithful, regardless of the cultural understanding around us."

More than 15 million Americans attend Southern Baptist churches. Many Christians yearn for the certainty and direction that come with a life based on a strict reading of the Bible. With the culture rapidly changing around them, however, the future of conservative evangelical Christianity is not clear.

By contrast, the more moderate Baptist churches would seem to have an ever-growing market. On the other hand, some of the people who have soured on the Southern Baptist approach now reject church altogether. The evangelical Protestant share of the U.S. population is declining, so the growth prospects for a congregation like Ridgewood Baptist are also unclear.

From the outside, with a cross prominently placed on the plain brick front, it looks like any other Baptist church in Louisville. Nick Wilson, the church pianist and most prominent gay member, says he would never have approached Ridgewood had he not heard it was a welcoming church.

"Driving by, seeing Ridgewood Baptist Church, I would not stop," he says. "I would just assume that I already know what's going on inside those doors, and I'm not welcome, or I don't want to be part of it, and would go on."