Accessibility links
Book Review: 'Everything Is Teeth' By Evie Wyld Novelist Evie Wyld departs from straight-ahead fiction in her new graphic novel about a young girl describing childhood summers in Australia — and her dark fascination with the sharks in the water.

Shadows Under Water In 'Everything Is Teeth'

Shadows Under Water In 'Everything Is Teeth' 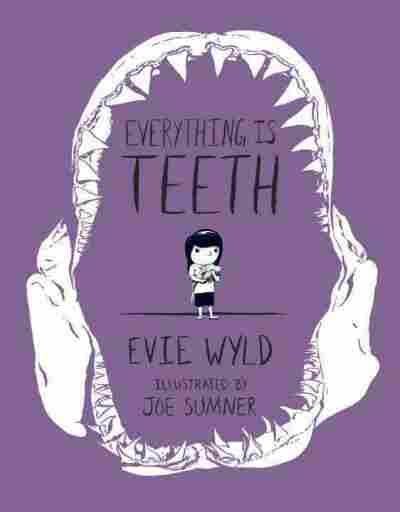 by Evie Wyld and Joe Sumner

Title
Everything Is Teeth
Author
Evie Wyld and Joe Sumner

Anglo-Australian author Evie Wyld departs from traditional fiction with a graphic novel, Everything Is Teeth, illustrated by Joe Sumner. The darkly poetic voice she evoked in her previous work reveals itself in a different way here, working within the constraints of writing text for a cartoon frame. At times limitations can bring freedom, and the very terseness required here offers power, linguistic clarity and dramatic opportunities that draw the reader into an emotionally compelling world. It's a subaqueous realm with a shadow passing beneath, and a dorsal fin that cuts the water with dread.

In this world, imagination is everything. The unnamed first-person protagonist tells of her childhood summers spent in Australia, cataloging "the sounds — the butcher birds and magpies that lived amongst us on the back veranda" and the "black mud that smelled bad, that had stingray burrows hollowed out in it." One creature looms above all others: the shark, with which the girl becomes obsessed. She recalls being six years old and hearing her relatives tell stories about "the thing beneath the water." She touches shark jawbones and is terrified.

Evie Wyld is one of those great short-listers in contemporary literary fiction, having been called out by U.K. outfits such as the Costa Novel Prize, the Miles Franklin Award, the Commonwealth Writers Prize, the Orange Award for New Writers and several other competitions. Her pedigree as an up-and-coming writer is impeccable, with two previous prize-winning works under her belt: After the Fire, a Still Small Voice and All the Birds, Singing. A novelist not hesitant to insert commas in the titles of her books might be expected to take a surprising turn, and a graphic novel represents exactly that.

In 'Everything Is Teeth,' the shark is a totem, a shibboleth, a larger than life bugaboo for Wyld's character, but as readers we understand — and sympathize — with the idea that the true terror comes from within.

The anxieties expressed here extend beyond sharks, naturally. The obvious touchstone here is Alison Bechdel's Fun Home, and Wyld likewise delivers an incisive portrait of a father who provides a forceful foil for the main character. She notes his "milk-bottle white" complexion, the wool socks he wears even in the Australian heat, his hatred of the sea and his discomfort with the sugar cane farm that surrounds them.

In both flights of fantasy and grounded reality, fear and violence always lurk close at hand. The girl devours books about shark attacks. Returning home to Peckham, England, she fixates on bullying attacks upon her brother, who regularly comes home well-bloodied from encounters with schoolyard toughs.

The world proves a dangerous place, and her fantasies of sharks grow ever more powerful. In one vivid dream, they come at her while she floats at sea, to "turn the raft over with their shovel snouts." She lives in constant dread, while her father copes with the terrors of the world by overindulging in too much wine. The writing is intimate; we are in her head.

The power of the prose in Everything is Teeth is magnified by Joe Sumner's illustrations, which combine primitive yet delicate portraits of the girl and her surroundings with viciously realistic renderings of sharks swimming through the pages. Readers can feel the heroine's palpable fright as she refuses to enter the sea to swim with her family. When she finally does, she is immediately stung by a bluebottle jellyfish, which only confirms her worst ideas about the water. Yet in their blank-eyed girth, the sharks in Everything Is Teeth are somehow gorgeous as well as threatening. I loved the scene where the family catches a pregnant shark and pulls rows of fetuses out of her belly, "like puppies, soft and smooth and slippery." The photographic rendering of the image is perfect.

Jung refers to the universal, innate fears of the human being: snakes and spiders. Perhaps sharks should be added to the list. Our obsessive anxiety over these monsters of the deep has helped to decimate shark populations worldwide. In Everything Is Teeth, the shark is a totem, a shibboleth, a larger than life bugaboo for Wyld's character, but as readers we understand — and sympathize — with the idea that the true terror comes from within. The narrator's fears, and her ultimate triumph over them, make for a magical trip into a world that we're happy to glimpse from the shore.