Accessibility links
StoryCorps: A Stanford Family: Groundskeeper Dad Cultivates His Son's Classroom Dream They both went to the prestigious school — though for different reasons. Frankie attended undergrad there, but it was his father, the school's groundskeeper, who inspired him to pursue that education. 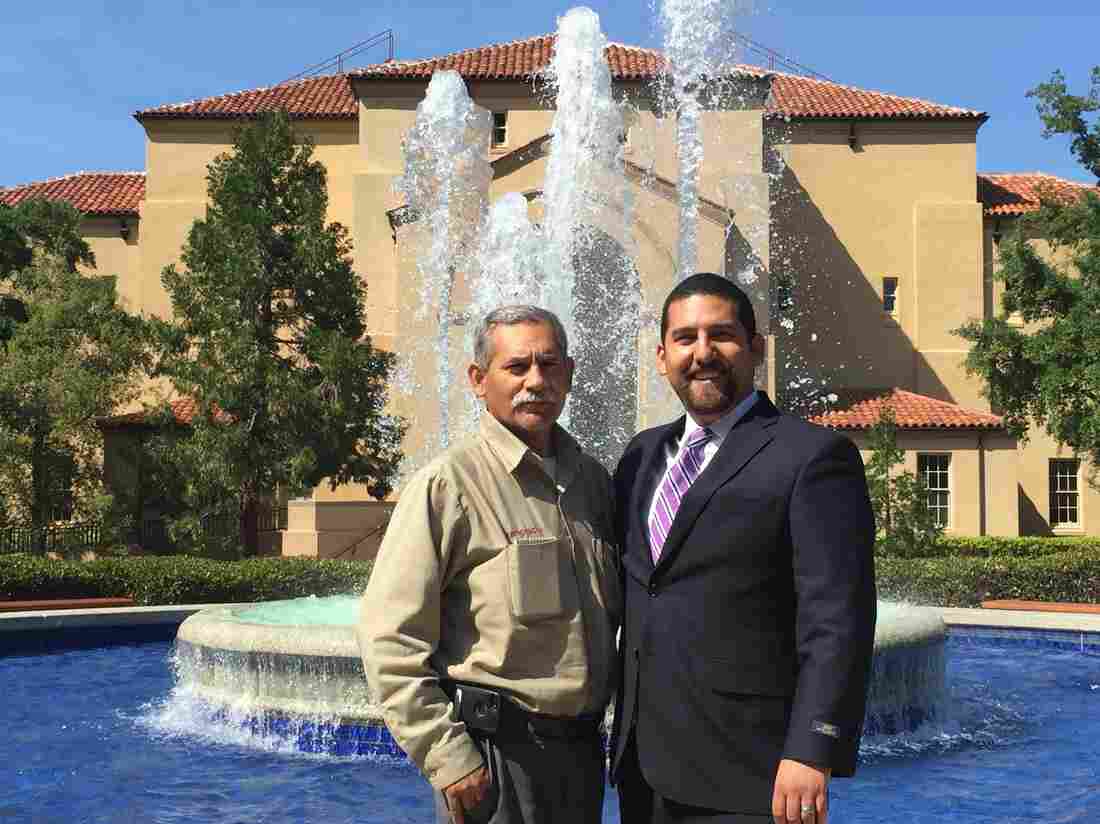 Francisco and Frankie at one of the fountains on the Stanford campus that Francisco cared for over the years. Courtesy of the Preciado family hide caption 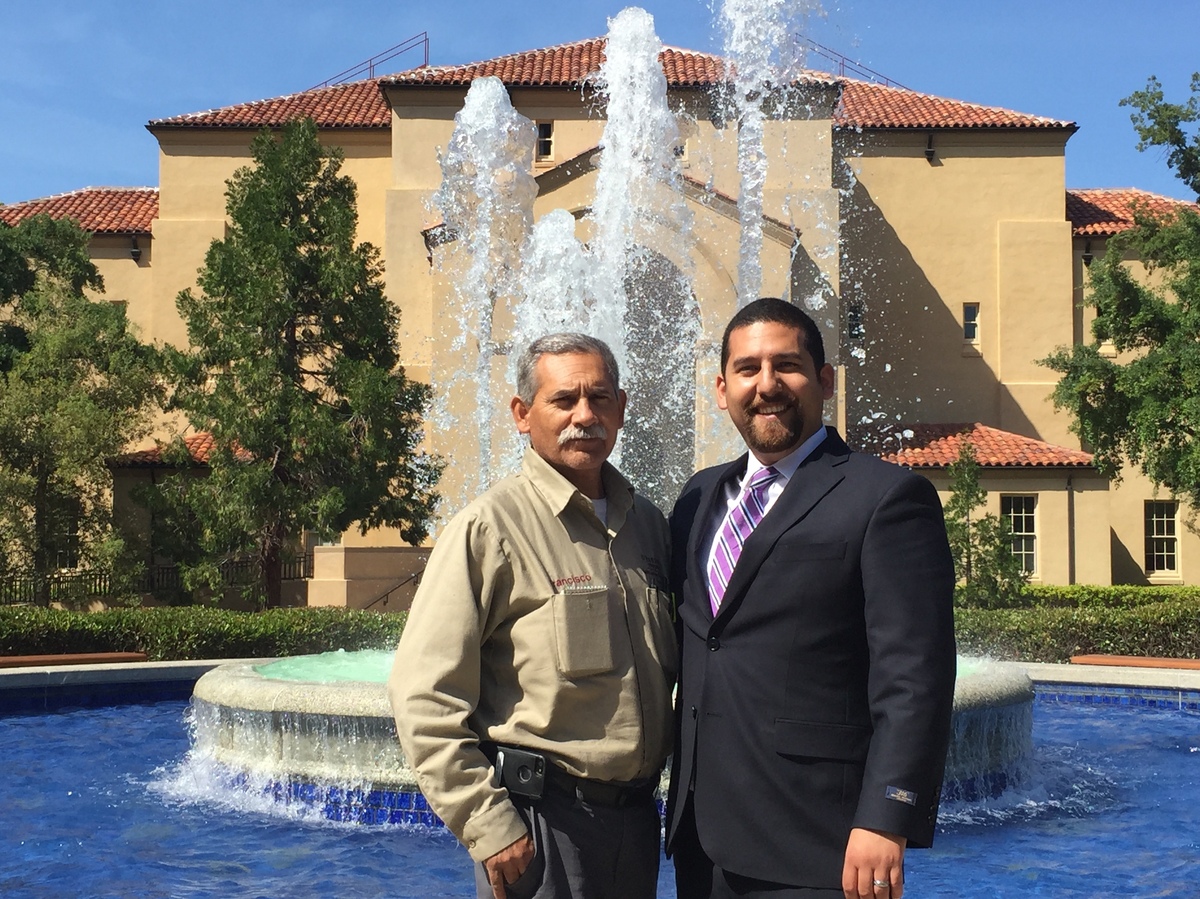 Francisco and Frankie at one of the fountains on the Stanford campus that Francisco cared for over the years.

Courtesy of the Preciado family

Francisco Preciado came to California from Mexico as a young child. By the early 1980s, he was raising a young family of his own in the U.S. and working as a groundskeeper at Stanford.

On a recent visit to StoryCorps, his son, Frankie, recalls, "Since I was around 9 or 10, I would come sometimes with you to help you on campus."

"I told you that one day, you were going to go here to Stanford," answers Francisco.

Amid A Lost Love, A Son And Father Finally Speak The Secret Between Them

That stuck with Frankie. He remembered those words, the hard work his father and mother put into their jobs, and set them up as examples for himself. And because of his dad, Frankie applied to Stanford.

"Then, you told us that you had been accepted," Francisco says, but you were worried that, 'Financially, Dad, I don't know if I can go because I don't have the money.' "

Francisco's reply to his son?

"Your mom and I will do whatever needs to be done."

And they did. Frankie matriculated at the university — but even as he attended classes, he didn't forget that his father was right there, working alongside him on the campus. In fact, their visits became routine; on Mondays and Wednesdays, for instance, when Frankie's father would be cleaning the fountains, Frankie would stop in for a visit.

Francisco, for his part, had his eyes on his son — and when he says that, he doesn't just mean his own.

"My friends there at work, they always would tell me, 'Oh, I saw your son over here,' or, 'I've seen him over there.' It was like I had extra eyes watching over you," Francisco tells his son. 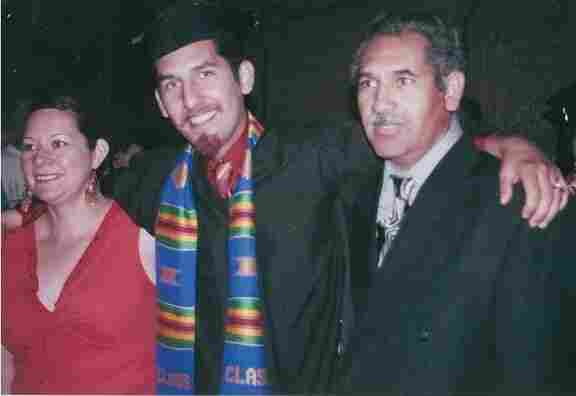 Frankie with his mother, Margarita, and father, Francisco, at his graduation from Stanford in 2007. Courtesy of the Preciado family hide caption 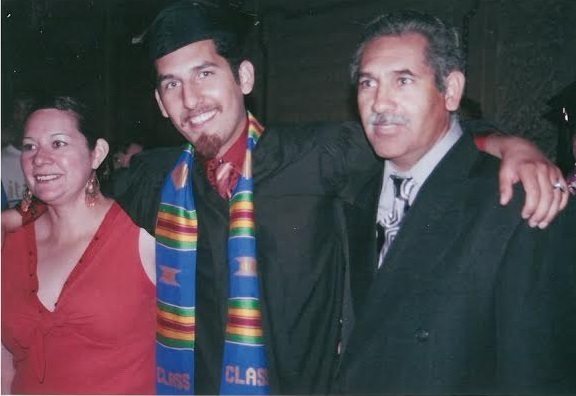 Frankie with his mother, Margarita, and father, Francisco, at his graduation from Stanford in 2007.

Courtesy of the Preciado family

Years later, on Frankie's graduation day in 2007, Frankie says he pulled his father aside. "This diploma is for you," he told him then.

These days, Frankie still has a hand in the school where he learned so much, both from his father and from the professors. He is the executive director of the union that represents Stanford's service and technical workers — including his dad.

Still, Francisco says he harbors one major regret. Financial problems forced him to leave college to get himself a full-time job, he says, effectively stalling his ambitions to become a teacher.

"Sometimes, I still think about being able to be a teacher, but I feel to me that it's too late," Francisco says. "So to see my son go to Stanford, it's like a little bit of me there. It gives me a lot of pride."