Accessibility links
Jodie Foster On Roles For Strong Women, On Screen And Off Foster is behind the camera on her latest film, Money Monster. She's found that directing allows her to execute a complete vision: "It's a full expression of who I am and what I think," she says. 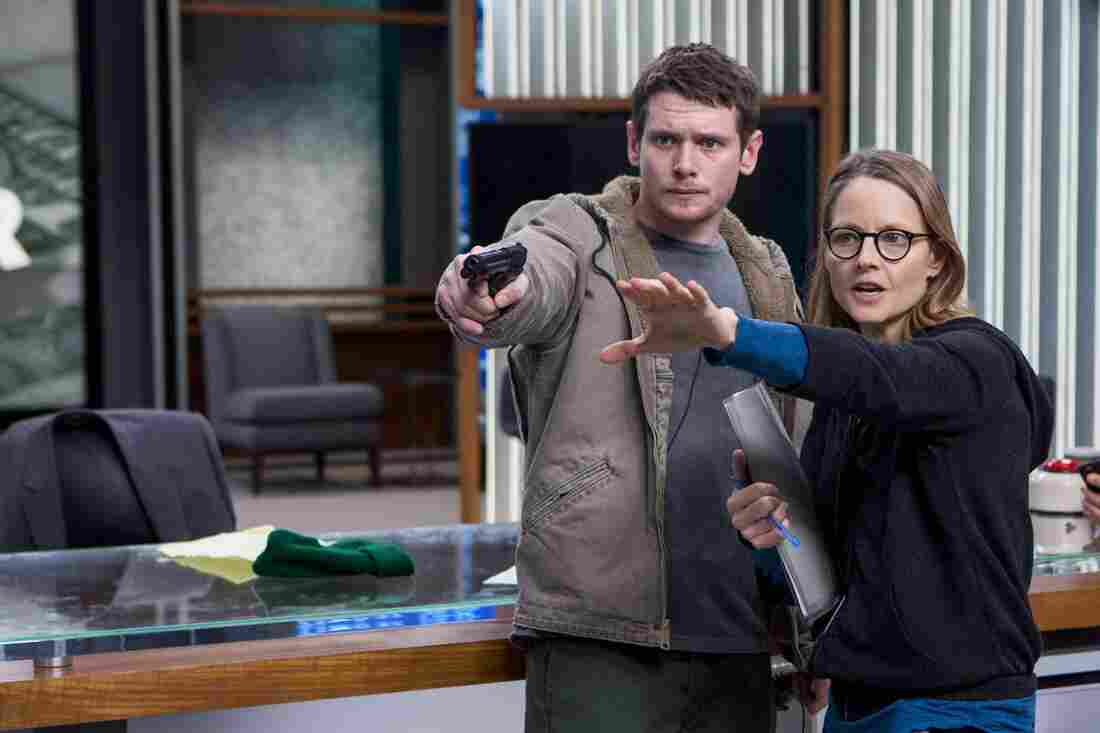 Jodie Foster has found that directing allows her to realize a complete vision: "It's a full expression of who I am and what I think," she says. (Above) Foster works with actor Jack O'Connell on the set of Money Monster. Atsushi Nishijima/TriStar Pictures hide caption 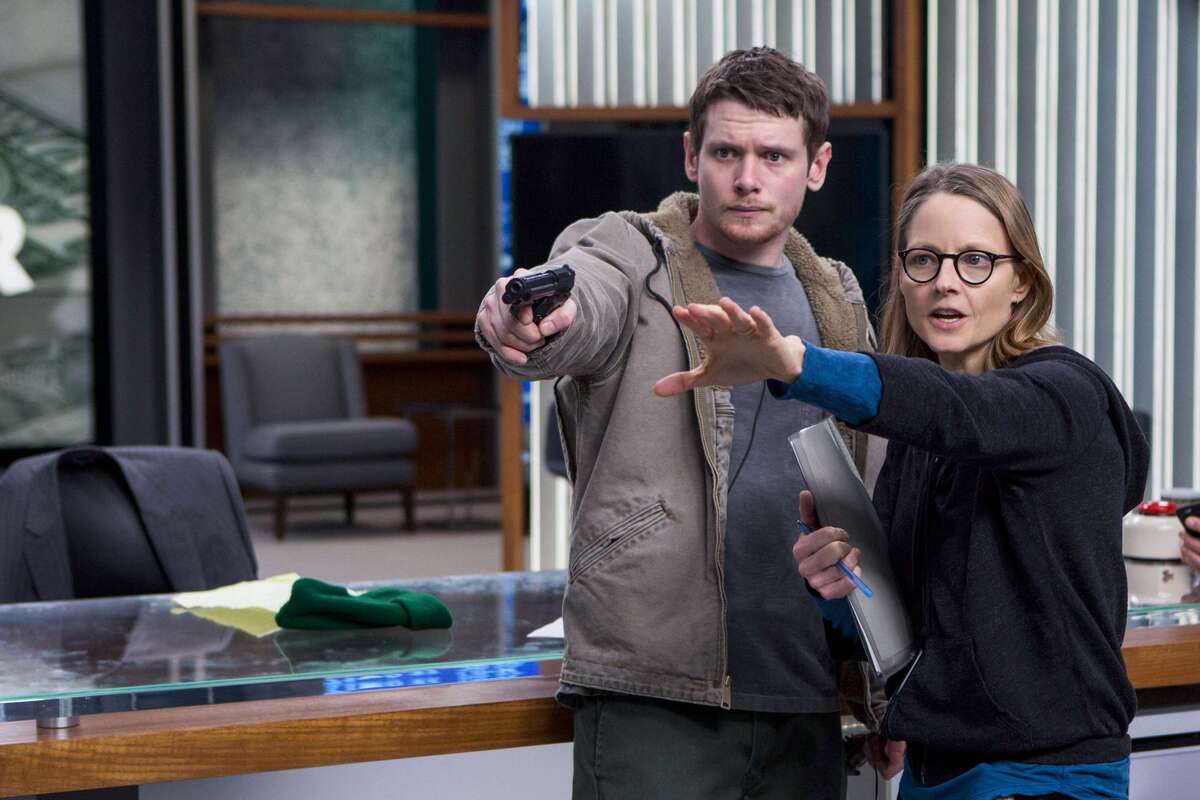 Jodie Foster has found that directing allows her to realize a complete vision: "It's a full expression of who I am and what I think," she says. (Above) Foster works with actor Jack O'Connell on the set of Money Monster.

Jodie Foster has entertained audiences on screen for decades, but more recently, she's been behind the camera, directing. And in her newest film, Money Monster, it's a behind-the-scenes character who gets to call the shots.

George Clooney plays financial guru Lee Gates, who dishes out stock market tips and money advice on his hit TV show. It's business as usual until an intruder arrives on set and takes Gates hostage during a live broadcast. From that point on, it's his longtime producer Patty Fenn — played by Julia Roberts — who's really in charge.

Big Money Bad Guys Are Back In 'Money Monster'

That's not how Roberts' character was conceived in the original script, so Foster made adjustments.

"I like strong women," she tells NPR's David Greene. "I like creating strong women on screen. ... And so fleshing out her character is what I do with all of my characters."

On the relationship between Lee and Patty 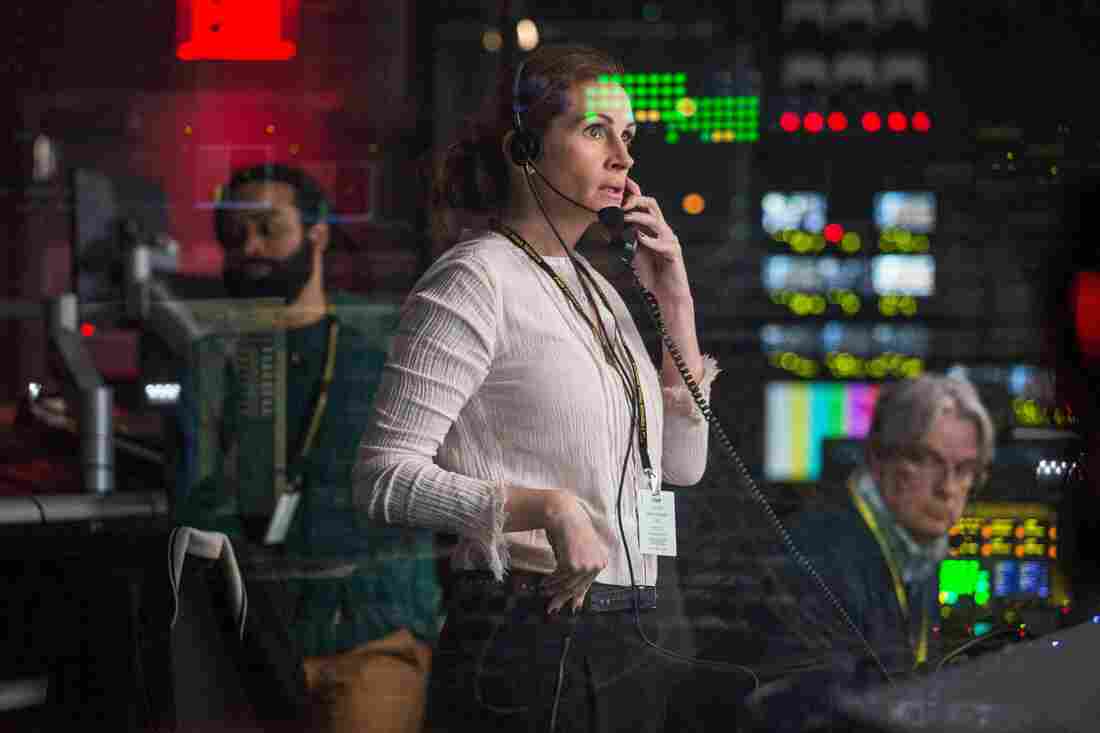 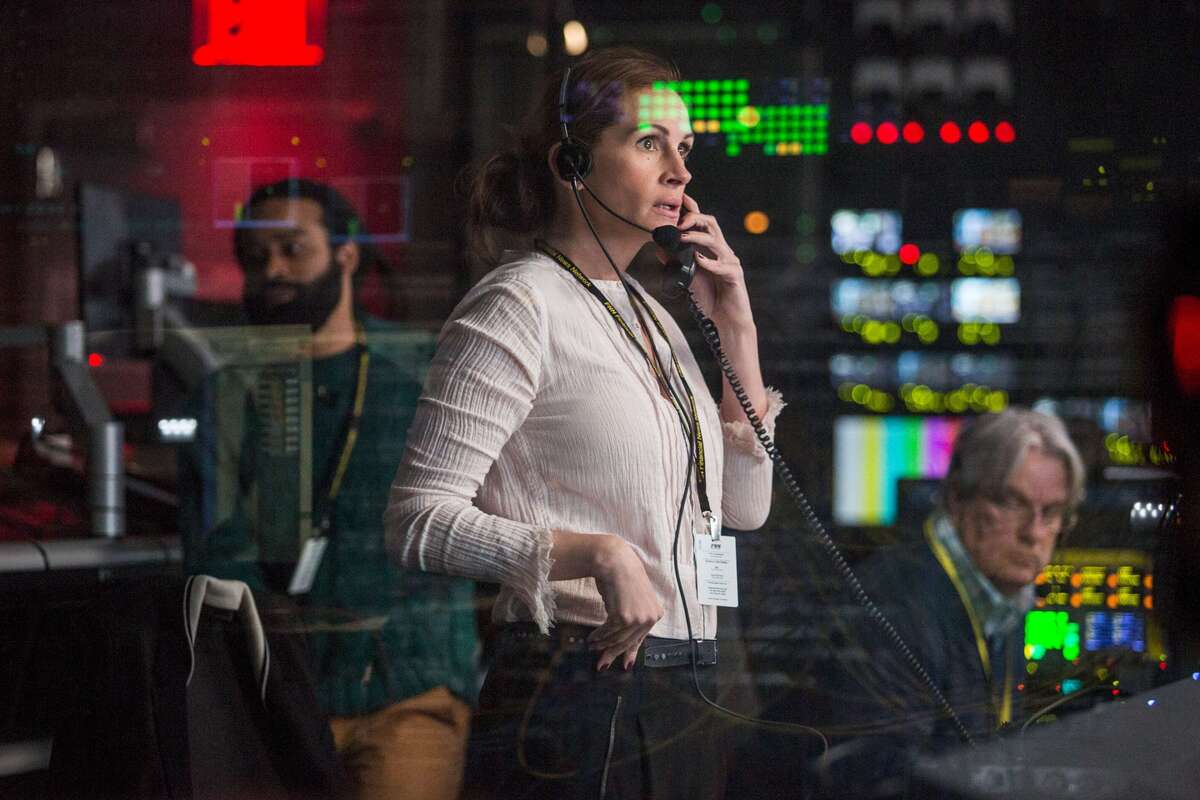 The relationship between Julia Roberts' character [Patty Fenn] and George Clooney's character Lee Gates was very special to me — this idea that there was a Jiminy Cricket in his ear — she speaks to him through his ear [piece]. ... The two of them together, in a way, make one hero. By the end of the movie she's orchestrated things better than the police have.

I would have loved to have made this movie with Julia Roberts playing Lee Gates' character. I mean, that would have been great, too. They could have switched roles and it would have been fine. In this movie it was more about a dynamic between the two — he's a guy who's old school and their relationship is kind of old school. She rolls her eyes and listens to his banter, but she cares for him, and she knows that inside all that bluster is a guy who has been hurt and that, in a way, is their connection.

On why there aren't more female directors

The good news is that audiences' tastes are changing because people get bored being fed the same cereal every day. I'm looking forward to the future.

It's great to be having the conversation — I've certainly been waiting for 40 years for people to have this conversation. Because there were no women on film sets at all when I was coming up. But that of course has changed.

It's really the mainstream end of the industry: Mainstream movies have become more risk averse than ever. They're making fewer movies — movies that are mostly franchised, tent pole films, superhero movies — because they've decided that's their model for the future. And in that scenario, for some reason they see women [directors] as a risk and they've minimized women by minimizing their risk. I don't understand why they see women as a risk, but they do. ... The good news is that audiences' tastes are changing because people get bored being fed the same cereal every day. I'm looking forward to the future.

That character, Clarice Starling, as written in the book, was a tragic male archetype from Greek tragedies ... and the fact that ... it was a woman who is searching for her meaning, her destiny. ... [She] goes and travels through this forest of experience and meets gnomes and demons along the way, and then is changed by that, and is able to come back to her people and bring the magic panacea — that's a real classic structure, and that's always been reserved for men, at least in film. That was a first, I think, and it allowed other opportunities for women to find different archetypes and adapt them to women.

I think she was being the devil's advocate. She was being protective ... I think she looked at the script of Silence of the Lambs and thought, well, wait a minute, Hannibal Lecter has the best part. And the character of Clarice is quiet, and plotting, and reserved and I think she was worried it would be too fragile a role to be taken seriously.

On why she loves directing

It's a full vision. Everything that goes on screen, every single choice, whether it's the sound choice, or the music choice, or the colors, or the cinematography, or the props — any single choice is a choice that I make for the narrative. And it's a full expression of who I am and what I think. That's what attracted me to directing — was wanting to have a full vision and a full signature.

Jodie Foster Talks About 'The Beaver' And Standing By Mel Gibson