Accessibility links
Reality Check: What Donald Trump Has Said About Taxes And The Wealthy Trump issued a reasonably detailed tax plan last year that included cuts for the middle class and wealthy. But some of his recent statements have left people pretty confused about his real intentions. 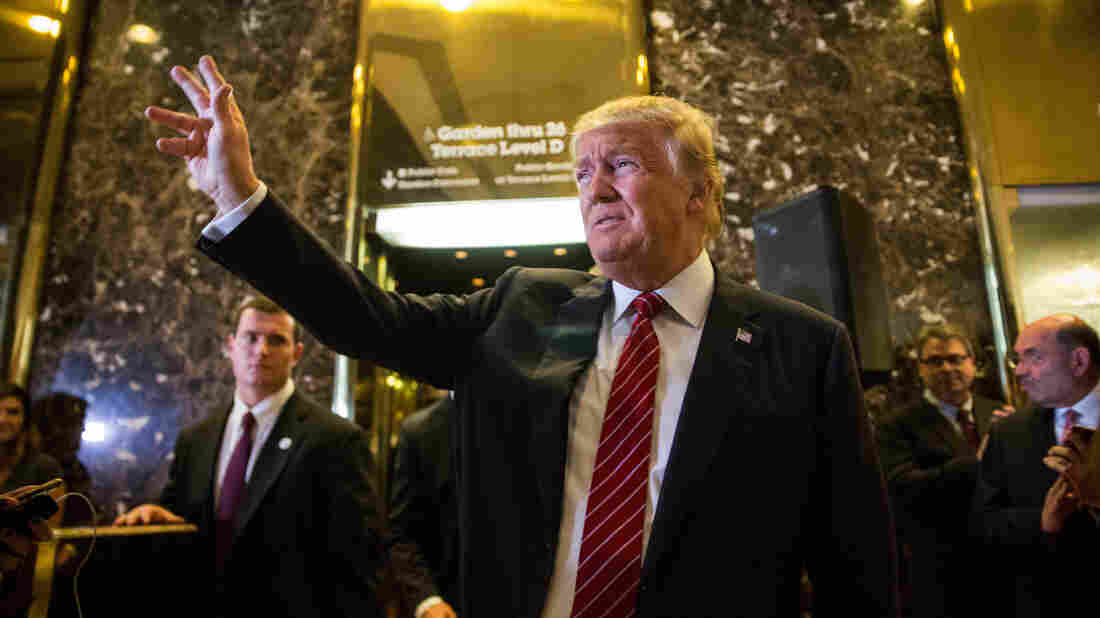 In September, Donald Trump laid out a series of tax proposals that would have, in part, meant big cuts for high-income people. Andrew Burton/Getty Images hide caption 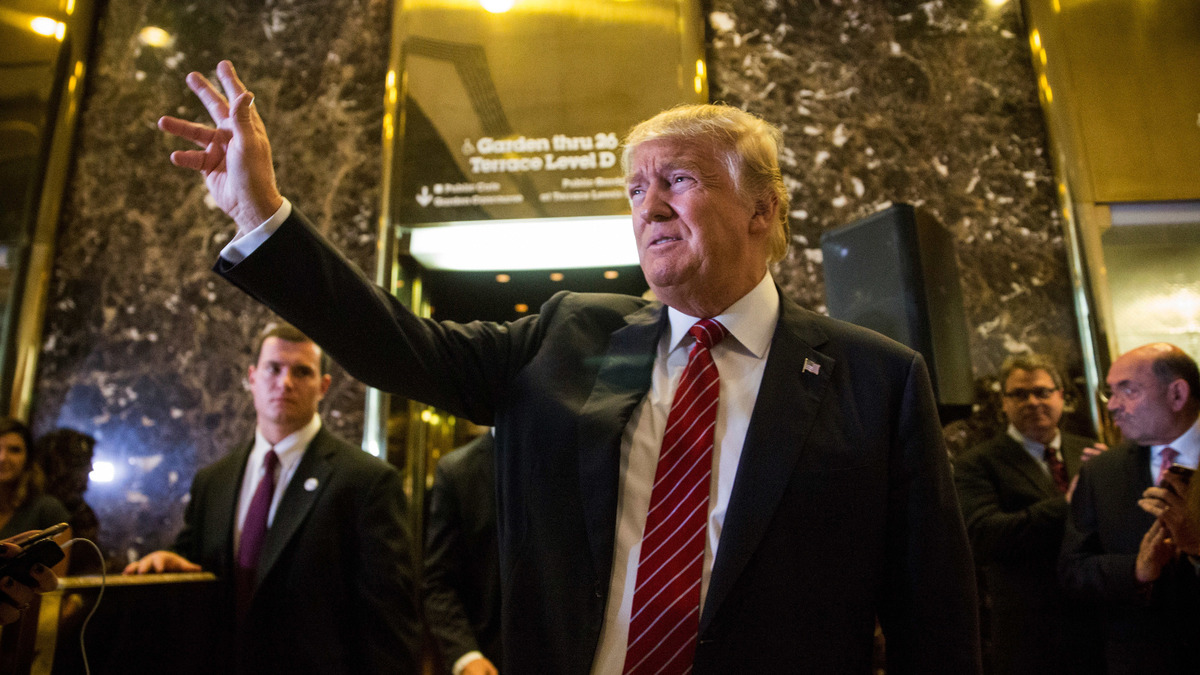 In September, Donald Trump laid out a series of tax proposals that would have, in part, meant big cuts for high-income people.

Donald Trump has made various statements about his tax plan in recent days that have left some people pretty confused about just what he'd like to do. Here's a guide to interpreting his remarks.

At a news conference at Trump Tower, Trump unveiled a series of proposals to dramatically simplify and cut business and personal taxes.

The proposals would have reduced the top marginal tax rate from 39.6 to 25 percent for couples with annual income above $300,000, which would have meant big cuts for high-income people. 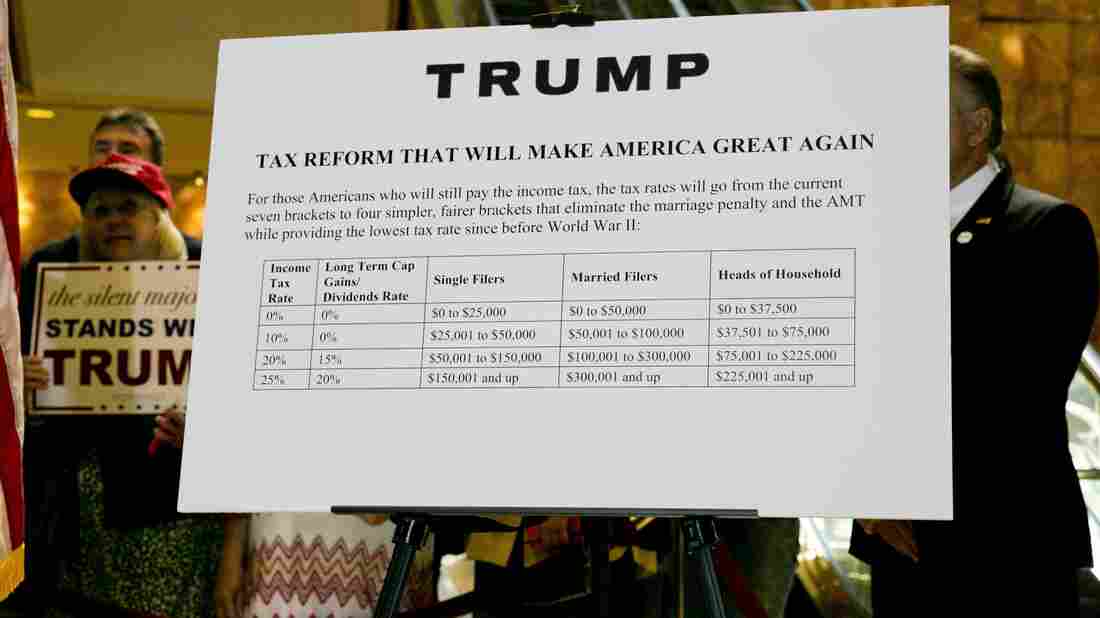 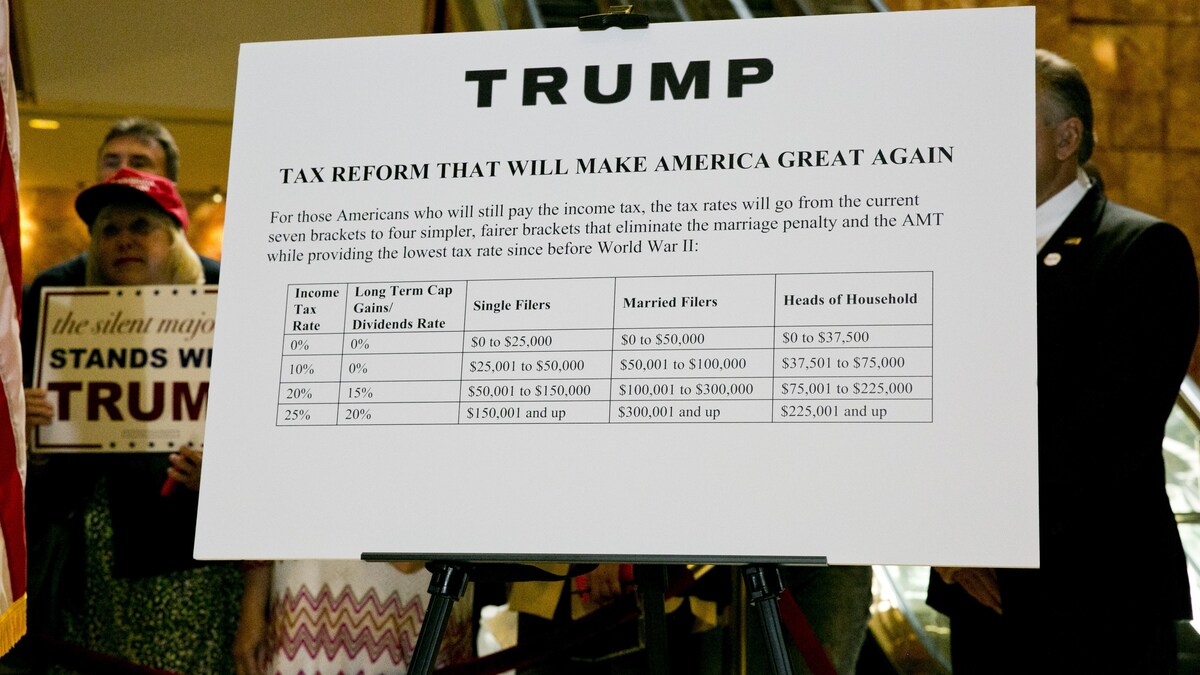 A poster outlining Trump's tax plan, titled "Tax Reform That Will Make America Great Again," hung behind him at a September news conference.

Trump maintained that the cuts would benefit middle-class families and that the rich would actually end up paying more in taxes, because he would eliminate unspecified deductions and loopholes.

Analysts who studied the proposals say they would increase the federal budget deficit by as much as $11 trillion over the first decade.

"For the wealthy, I think, frankly, it's going to go up. And you know what? It really should go up." — NBC's Meet the Press, May 7

Last weekend, during appearances on NBC's Meet The Press and ABC This Week, Trump appeared to suggest that he favors higher taxes on wealthy individuals. If true, it marked a significant departure from longtime Republican dogma on taxes, and many in the GOP were, to say the least, confused.

"Even this morning, you know, he's talking about changing his tax policy and raising taxes," said Rep. Sean Duffy, R-Wis., a Trump supporter. "We want to button him down and say, 'Where are we going to go, Mr. Trump, if you're president?' "

Starting Monday, Trump sought to clarify his remarks, with interviews in The Wall Street Journal and on Fox Business Network, among others.

Trump said he absolutely does not favor raising taxes on the wealthy, or anyone else for that matter.

But he acknowledged that in negotiations with Congress, he would almost certainly have to concede on some points, and his plan might have to be scaled back a bit. The rich would still get a tax cut, but it wouldn't be as big as he first proposed.

"The interesting thing about how Trump looks at this stuff is, he sort of compromises his negotiating position right upfront by admitting that he doesn't really think this is really his plan, and that's something unusual, something I've not seen from other political candidates," says Alan Cole, an economist at the Tax Foundation.

Stephen Moore, a prominent conservative commentator and founder of the Club for Growth, who met with Trump several weeks ago, says he remains convinced that the candidate is committed to tax cuts.

"He told us in the meeting he wants to cut tax rates. He believes this is the way to grow the economy, and I take him at his word on that. I think that's been a centerpiece of what he's been talking about on taxes," Moore said.

But Moore says he and other conservatives, including Larry Kudlow and Arthur Laffer, have met with Trump staffers to discuss ways to tweak Trump's tax cuts, to mitigate their impact on the deficit. While Trump hasn't actually endorsed their ideas, his staff seems willing to consider them, Moore says.