Accessibility links
An Emotional Storm Breaks In Paradise In 'A Bigger Splash' An aging rock star's respite in the Mediterranean is interrupted by an old lover in A Bigger Splash. John Powers calls the film, which stars Tilda Swinton and Ralph Fiennes, a "gripping slow-burn." 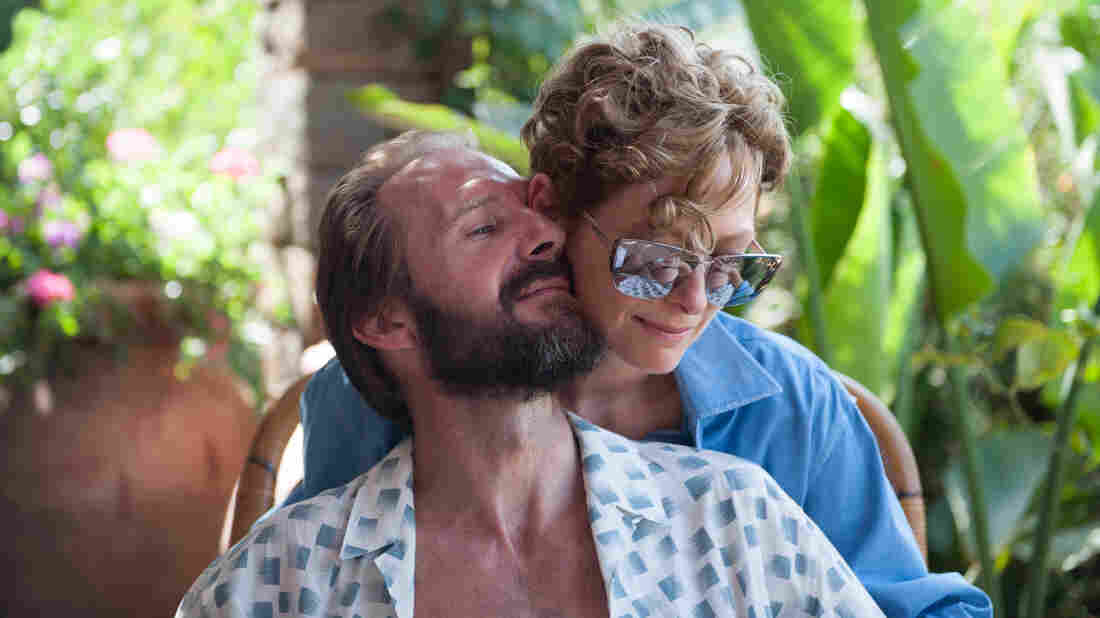 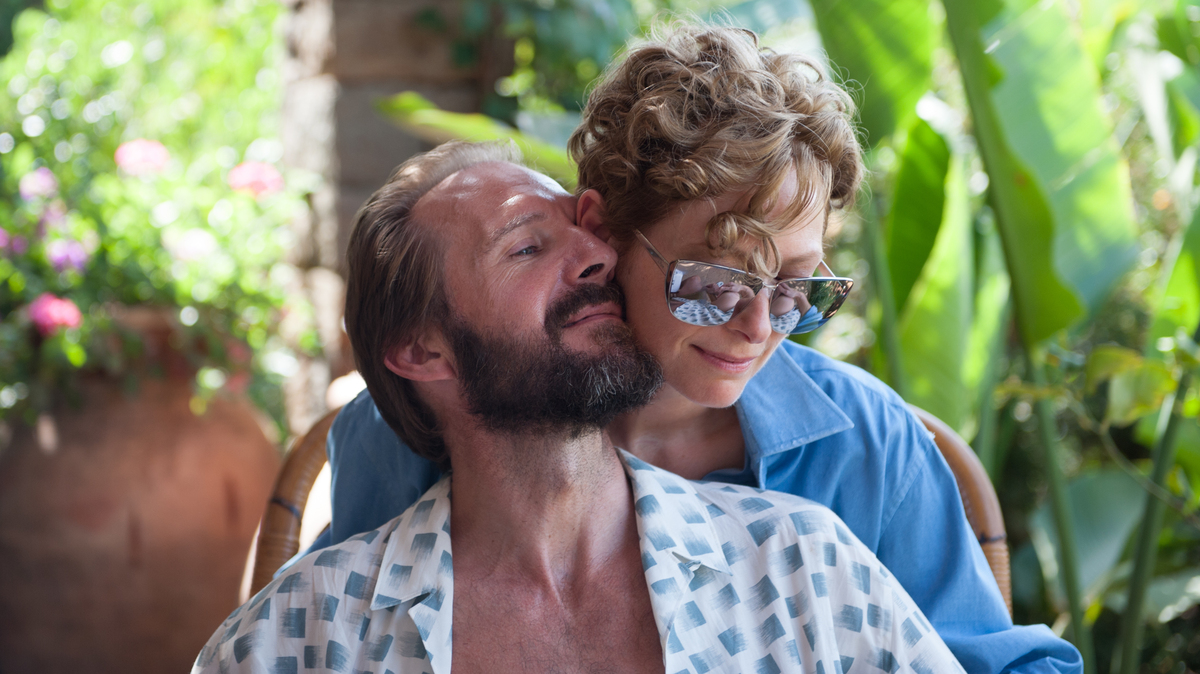 Every movie is set somewhere, yet most movies feel as if they're happening nowhere at all. They're set in a Manhattan so generic that the filming was actually done in Toronto, or in a Paris we only know is Paris because we get a shot of the Eiffel Tower, or in an imaginary small town from some unnamed state whose purpose is to be every small town. Such settings have no presence, no weight, no humidity, no purpose — they're background.

If you want to enjoy a location being used properly — and alluringly — let me suggest A Bigger Splash, the gripping slow-burn film by Luca Guadagnino, the Italian director who made I Am Love, the swooningly romantic hit film starring Tilda Swinton. Set on the Mediterranean island of Pantelleria, where the likes of Madonna and Giorgio Armani go for R&R, this remake of a 1969 French thriller offers the brand of grown-up entertainment that has all but vanished from our theaters.

Tilda Swinton May Be A Rock Star, But Her New Film Leaves Her Speechless

Marianne and Paul are having an idyllic time until they get a call from Marianne's old producer and lover, Harry Hawkes, played by Ralph Fiennes. Before they know what's hit them, they're hosting Harry and his nubile daughter, Penelope (Dakota Johnson from 50 Shades of Grey).

The four first meet at the island's airport, and it's instantly clear that Fiennes' garrulous Harry is going to be the quartet's ringmaster. The newcomers' arrival shatters Marianne and Paul's quiet holiday. It's not simply that Harry is a hyper-kinetic life of the party, but that he wants everyone else to get with the program. 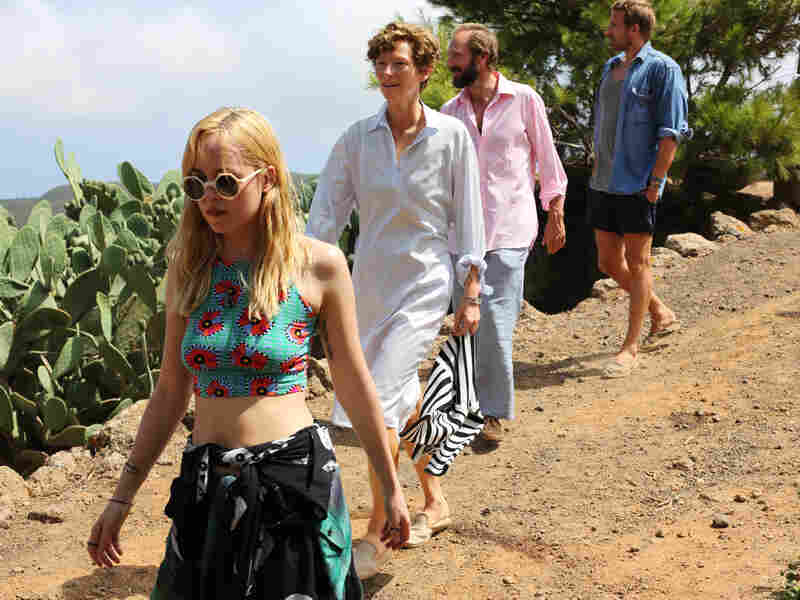 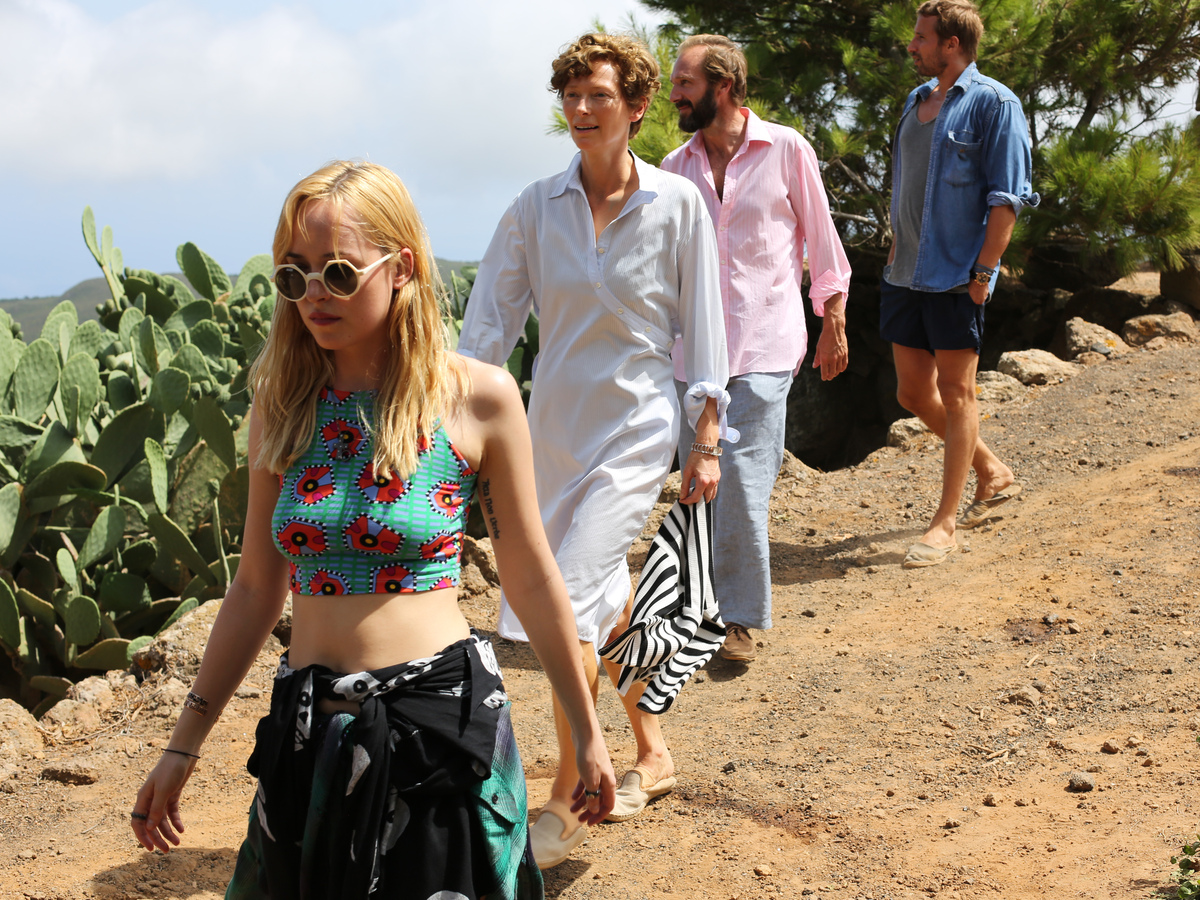 Even as he works to win Marianne back to their old excesses and ecstasies — a life she's outgrown — his daughter appears to be making eyes at Paul. As old memories and resentments bubble up, you sense that something bad is going to happen.

As for Swinton, long before she became a fine actress, she was an extraordinary creature that no camera could resist. Certainly Guadagnino's can't. She's his muse. He looks raptly, sometimes rapturously, at her lanky body and cool, otherworldly features. Swinton's mere being makes Marianne the eye of the emotional storm.

The storm itself is Harry, the sort of whirling dervish character I nearly always find annoying and unconvincing. But in recent years, Fiennes — who was always a terrific actor — has discovered a rich new vein of joy in his work. He turns Harry into a dazzling creation. Whether telling old stories, dancing to the Rolling Stones, or skinny dipping in the pool, Fiennes gives us the definitive portrait of a man whose embrace of life's pleasures is fueled by desperation.

The movie is worth seeing for Fiennes and Swinton, yet what makes it doubly seductive is Guadagnino's skill at revealing social privilege from the inside. In I Am Love, he gave us the sumptuous textures of upper-class Milan — you could almost feel the fabrics. Here, he gives us the Pantelleria that is at once a playground for the entitled and a way-station for illegal North African migrants, who serve as the film's — and maybe the filmmakers' — guilty conscience.

Guadagnino makes you feel the island in all its real-life tactility. The light may be gorgeous, but there's also heat making you sweat, mosquitoes to swat and snakes to watch out for. Marianne and Paul's villa may be enviable, but its rooms aren't particularly large or posh. The best meal takes place at a roadside joint where the quartet eats great food off plastic tables — the quintessence of shabby chic. This is how the rich live.

Guadagnino clearly knows their world in all its details. And in A Bigger Splash, he plunges us into its many comforts and corruptions. Walking out of the theater, you'll know that the movie has done something that movies ought to do. It has lifted you out of your seat and taken you to a place that's really a place.