Accessibility links
Book Review: 'The Fox Was Ever The Hunter' By Herta Muller Herta Müller's remarkable novel tells the story of a young schoolteacher who becomes convinced, through gruesome clues, that the Romanian dictator's secret police are closing in on her.

The Nightmarish Reality Of Ceausescu's Romania In 'The Fox'

The Nightmarish Reality Of Ceausescu's Romania In 'The Fox' 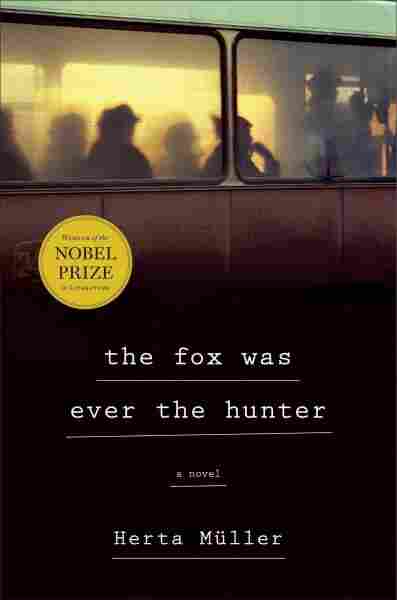 The Fox Was Ever The Hunter

by Herta Müller and Philip Boehm

A young schoolteacher named Adina arrives at her apartment in an unnamed Romanian town. She immediately notices an odd detail: A fox-fur hearth rug she has owned for years has had its tail cut off. She next comes home to discover a hind leg severed from the pelt, and once more to find another leg removed. What in the world? In this particular world no detail is without meaning, and all meanings are potentially lethal. It is the late 1980s, in the Panopticon security state of Nicolae Ceausescu, and the mutilated rug convinces Adina that Big Brother is closing in on her.

An air of Soviet-era menace engulfs The Fox Was Ever the Hunter, Herta Müller's remarkable novel — newly released in English and given a lucid translation by Philip Boehm. When Müller received the 2009 Nobel Prize in literature, the Swedish Academy described her as a writer who "depicts the landscape of the dispossessed." The Fox, published originally in German in 1992, is one of Müller's early works, and it draws on what she suffered while clenched in the jaws of one of history's most notorious dictatorships. But she infuses characters and events with surreal elements and heightened levels of metaphor that make this much more than a roman à clef.

Where Adina lives, the children have "clusters of warts like gray berries, fingers like turkey necks." One boy tells Adina that his mother speaks of hidden drawers "in the tree trunks, in the grass, in the fence, in the walls." Each drawer has an ear inside, the mother says, and they are always listening. A paranoiac, as William S. Burroughs once said, is someone in complete possession of the facts.

In The Fox Was Ever the Hunter, characters don't live their lives, they perform them matter of factly, with the state as an ever-watchful, ever-predatory audience. Physical detail communicates psychological realities: "The street runs by, the city is a black thimble with steep sides, the housing blocks as narrow as foreheads." Müller frequently dwells on the town's poplar trees that "carve the hot air," that are "green knives." "Disaster is always unadorned and as bare as winter wood," she writes. Her images come at us with a stark brutality; outside the town sheep graze, so famished by the end of summer that they "lick the walls" of a slaughterhouse.

In 'The Fox Was Ever the Hunter,' characters don't live their lives, they perform them matter of factly, with the state as an ever-watchful, ever-predatory audience.

Hunger is everywhere, coursing through bodies like blood. When the despot Ceausescu and his horror-handmaiden wife, Elena Petrescu, were executed in 1989, the charges leveled against them included genocide by starvation, and this is reflected in the novel by the meager foodstuffs characters consume — rancid sunflower seeds, wormy apples and nuts with meats like "brains." One of Adina's crimes is to exhort her hungry students to eat the tomatoes they are dragooned into harvesting. At one point she remembers her childhood, the "dust behind the streetcar, and on the sidewalk the footsteps of tall, emaciated men earning money to buy bread."

Adina is joined in the narrative by her friends Paul, a doctor; Clara, a factory worker; and Ilie, a soldier with whom she has a long-distance romance. What are young radicals to do? Well, they could start a band, an anti-authoritarian strategy that would later work to such strong effect with Russia's Pussy Riot. Paul plays guitar, and he and his bandmates begin to perform a song that goes, as we would say nowadays, viral.

The anthem, "Face Without Face," is a far cry from the songs Romanian schoolchildren of the era were forced to learn, praising the party, the leader and the nation. Snatches of the lyrics seem to float in the air: "Face without face/Forehead of sand/Voice without voice/Nothing is left/Except for time." When the group performs its strange conceptual rallying cry onstage, agents of the Romanian secret police, the Securitate, evacuate the theater.

"Tell a dream, lose a reader," Henry James pronounces, but Müller provides exceptions to the rule. Here, dreams become extensions of life, or life itself is a dream; they are cut, at any rate, from one and the same fabric, consistently lurid and terrifying. Witchery in the form of "melon blood" is used to capture men's affections. A tiger-striped cat has eaten her annual litter of kittens for years. We see a living man with a hatchet blade stuck in his skull. This is the reality of Ceausescu's Romania, where Adina attempts to survive. No nightmare could be worse.