Accessibility links
How Congress And The VA Left Many Veterans Without A 'Choice' The $10 billion Veterans Choice program was supposed to cut down on wait times and let veterans see private doctors, but less than two years later, the faltering program needs an overhaul. 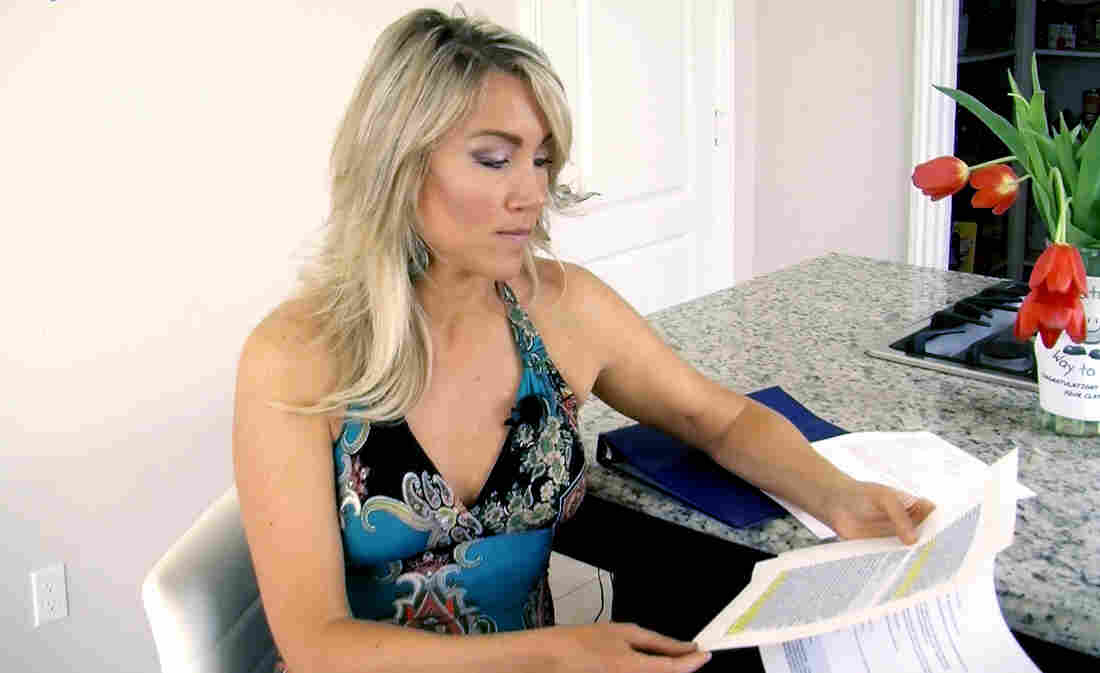 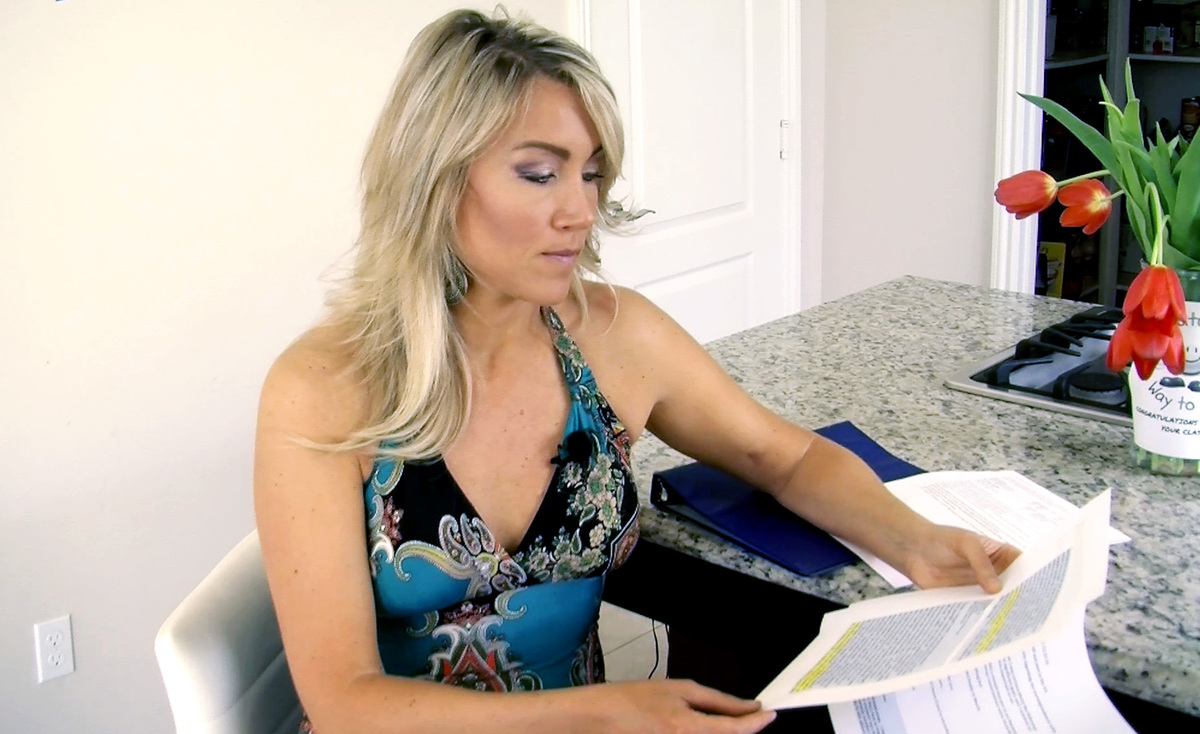 NPR — together with member stations from across the country — has been reporting on troubles with the Veterans Choice program, a $10 billion plan created by Congress two years ago to squash long wait times veterans were encountering when going to see a doctor. But as we reported in March, this fix needs a fix.

Around the nation, our joint reporting project — called Back at Base — has found examples of these problems. Emily Siner of Nashville Public Radio reported on troubles with overcrowding in Tennessee. And Monday, we reported on hospitals and doctors not getting paid in Montana and veterans getting snarled in the phone systems trying to make appointments in North Carolina.

Congress and Department of Veterans Affairs officials are in the middle of overhauling the program. Here are some reasons:

'I'm In So Much Pain. I'm Asking For Relief'

Amanda Wirtz, who was discharged from the Navy in 2003 after developing a rare tumor, began having headaches last November. When the VA couldn't get her in to see a specialist, it offered to send her to a neurologist in the community, using the new Veterans Choice program. This was the type of situation Congress envisioned when it created the program in 2014: If the VA couldn't schedule a patient within 30 days, or if the vet lived more than 40 miles from a VA clinic, the vet could see a nearby private doctor.

Her experience isn't new to government officials, but the question is whether Congress or the VA should have anticipated there would be problems.

Two years ago, Congress was hearing about the VA concealing wait times at VA hospitals and clinics, and about the veterans who were suffering as a result.

"If you don't think, in 2014, that was the time to stand up a program like Choice, I don't know when you would find a time," said Rep. Jeff Miller, R-Fla., the chairman of the House Veterans Affairs Committee. "That's the problem. They were causing veterans to wait. And by the way, veterans did die, while they were on the waiting list."

NPR's Renee Montagne talks to David Shulkin, under secretary for Health at the Department of Veterans Affairs, about the VA's plans to fix Veterans Choice.

Congress worked at a frantic pace. The House passed a bill on June 10, 2014. The Senate passed its own version within days. By Aug. 7, President Obama had signed the Veterans Access, Choice and Accountability Act of 2014. It gave the VA $10 billion to set up a program that would give qualified veterans the option of seeing a private doctor.

There was confusion from the beginning. The law required the VA to distribute 9 million Veterans Choice Cards to vets receiving VA care as of August 2014, even though all vets who use the VA already have a VA card. Sen. John McCain, R-Ariz., explained the card at a press conference, while lawmakers crafted a final version:

"I always believed that veterans could choose and should choose and that's why I first proposed this in 2008, when I ran for the presidency of the United States," McCain said. "Give these veterans a Choice Card so they can take that Choice Card and present it to the health care provider."

Impatient lawmakers gave the VA only 90 days to set up the national program. The first decision that VA officials made was that they couldn't run the program themselves.

"Could we set up the infrastructure to build the network to credential the network in 90 days?" Baligh Yehia, assistant deputy undersecretary for community care at the VA, asked. "We couldn't. We just didn't have the resources, the tools available to us to do that."

So the VA shopped around. It invited 57 companies to a VA-sponsored event in September 2014 to gauge interest in possible bids. But nearly all of them turned down the VA.

"Only four companies said they were interested in continuing some conversation," Yehia, who wasn't with the VA when Congress mandated the Choice program, said. "And then two of those companies made it crystal clear that given a November, or a 90-day, time frame, they're not interested."

That left two companies the VA had under contract to help it manage a portion of the roughly $4 billion a year the agency was already spending on outside providers. TriWest and Health Net were building a program called Patient Centered Community Care, or PC3. The network of private doctors and hospitals was meant to help the VA streamline the relationships local VA medical centers had with community providers.

The VA decided to build the Veterans Choice program by building it on top of PC3.

But PC3 was having its own problems. The VA's inspector general found that in the summer of 2014, while Congress was debating the Choice program, VA administrators were scrambling to find appointments for hundreds of vets, after the companies couldn't find doctors for them in their networks.

Some of the problems that would emerge later with the Choice program were apparent in PC3. For example, within three months, TriWest returned referral authorizations of 172 out of 192 gastroenterology cases, and 57 of those patients had to be seen immediately because they had symptoms of significant ailments, such as cancer.

The VA was also making the process difficult because it was taking the agency an average of 19 days to submit appointments to the contractors, according to another VA inspector general report.

Yehia stressed that PC3 was new and smaller than Choice but also acknowledged that the VA didn't have any other alternatives.

"This car wasn't designed to run this race," Yehia said. "It had a very different purpose. It had a very different intention. In fact, the PC3 contract when it first rolled out didn't even have primary care. It was only a specialty care contract. It gives you the scope that this vehicle was not meant to deliver this vast program."

'Many Veterans Were Confused'

Health Net did not respond to requests to be interviewed. It runs the Choice program mostly in the Eastern portion of the United States. TriWest covers 28 states in the Western half of the country. TriWest created 10 call centers, including one in San Diego that opened in September. The company has hired more than 3,000 employees.

"Oh my God, you expect us to build networks, have all these processes in place, all these contact centers to be able to do all of these things, at a very, very abbreviated schedule," said Frank "Mac" Maguire, chief medical officer for TriWest. "I think a lot of people said, 'You are crazy.' Were we crazy? In hindsight, maybe yes, but we felt we were up to the challenge and we just want to be given an opportunity to show that it's working." 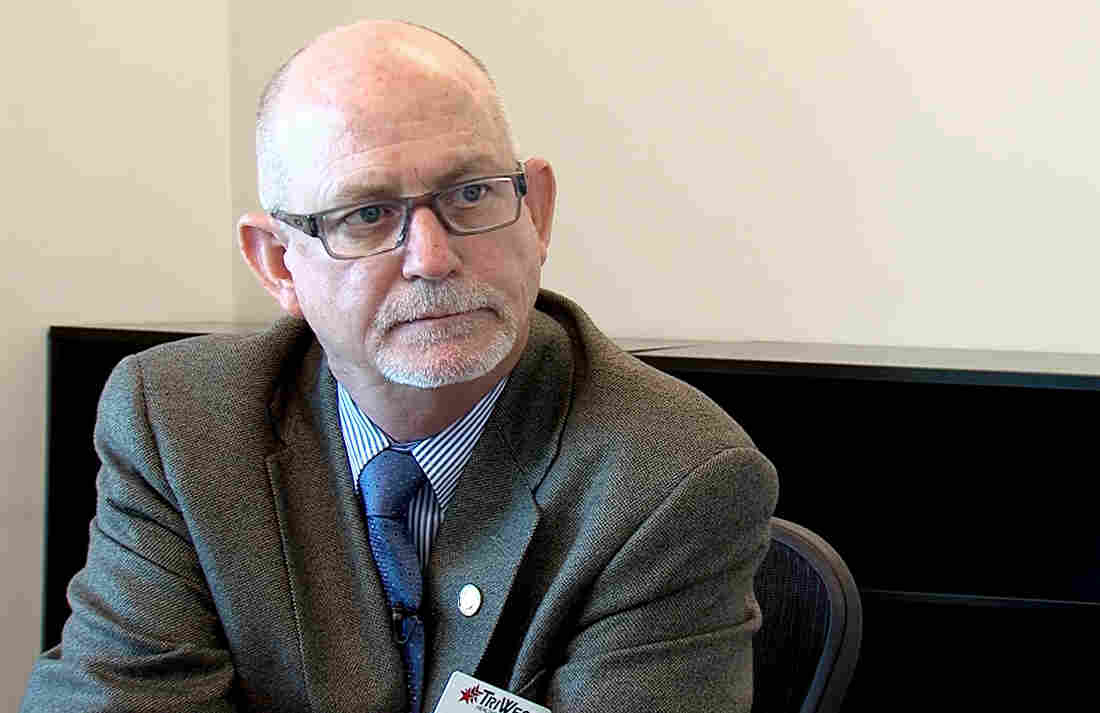 The company believes it finally has a network of doctors large enough to handle the patient load for Veterans Choice. It concedes creating a network was a struggle, in part because the VA did not always understand its needs.

Sometimes VA rules created obstacles. Until recently, the VA would not let the companies call veterans directly to schedule an appointment. The vet had to call them, which sometimes left vets waiting by the phone.

"Many veterans were confused," Maguire said. "Maybe it was a month since they've seen the VA. 'Why is my appointment not set up?' And we'd say, 'Unfortunately, we've been waiting for you to call us.' "

TriWest believes it has a handle on the problems. In San Diego, TriWest went from a ribbon-cutting in September to more than 300 employees answering veterans' calls. 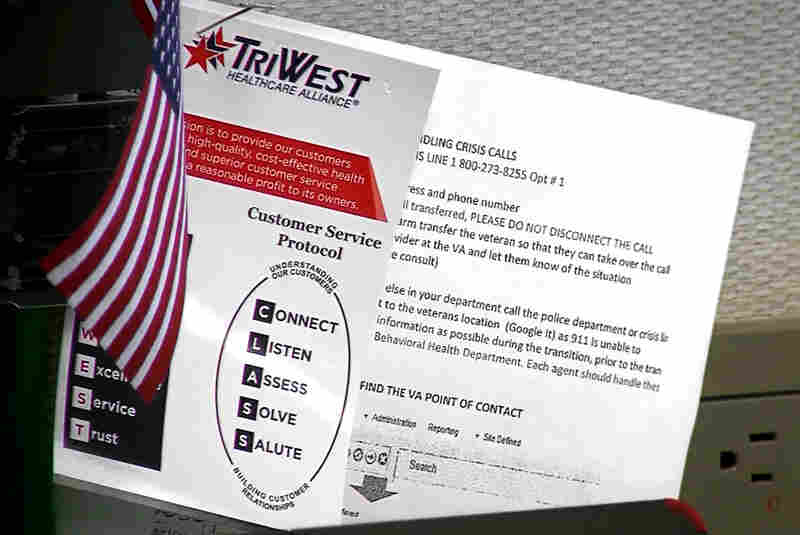 A brochure at a TriWest call center in San Diego lists its customer service protocol. Courtesy of KPBS hide caption

But it may be too late. The VA is now reconsidering whether it should have outsourced so much of the program — especially customer service.

Adrian Atizado, with the Disabled Veterans of America, said putting a contractor between the VA doctor and the outside physician may always cause problems.

"The third-party administrator will sometimes say the authorization is not very clear," he said. "Exactly what kind of eye check do you need? Or what kind of MRI do you need? There are a lot of communication problems when you start handing things off to other people."

Congress is looking at revamping and expanding the Choice program to cover most of what the VA spends on outside care. Considering it was born out of a scandal involving VA scheduling, some in Congress are not eager to allow the VA to take on a greater role.

The GAO report released this month says the VA's system for processing claims relies mainly on paper files — a process that adds months to the amount of time it takes to pay doctors. Whatever the outcome, the pressure is on to figure out how to get veterans the care they've been promised, without all of the confusion.