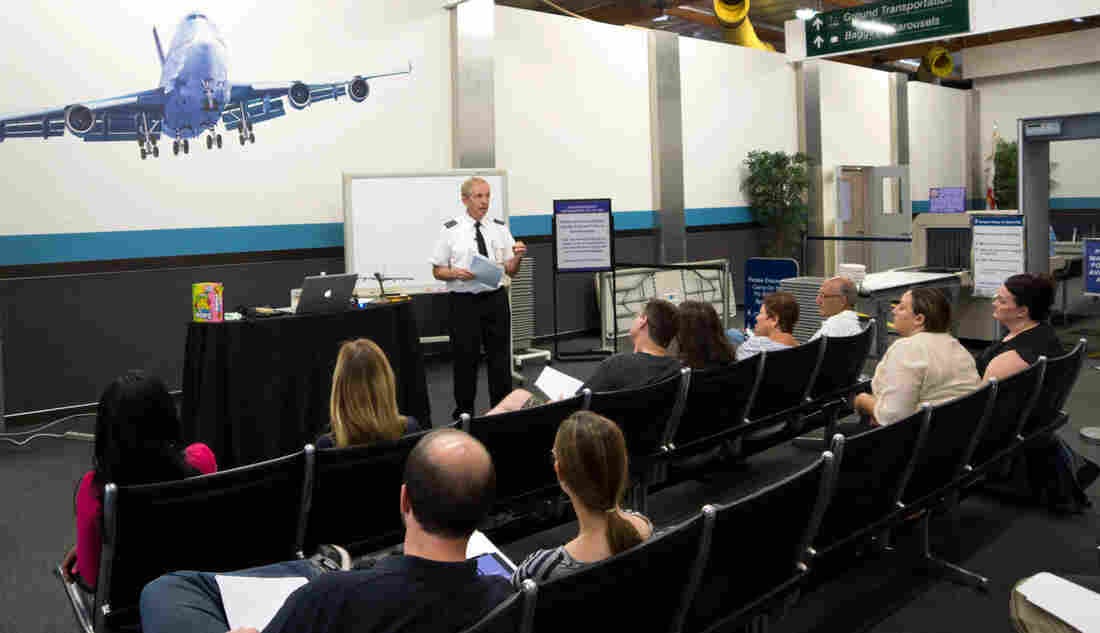 Ron Nielsen, a retired airline pilot, tells his class of fearful fliers in Southern California that crying can be a useful emotional release. If that's what they need to do, he tells them, "let 'er rip!" Courtesy of Air Hollywood hide caption 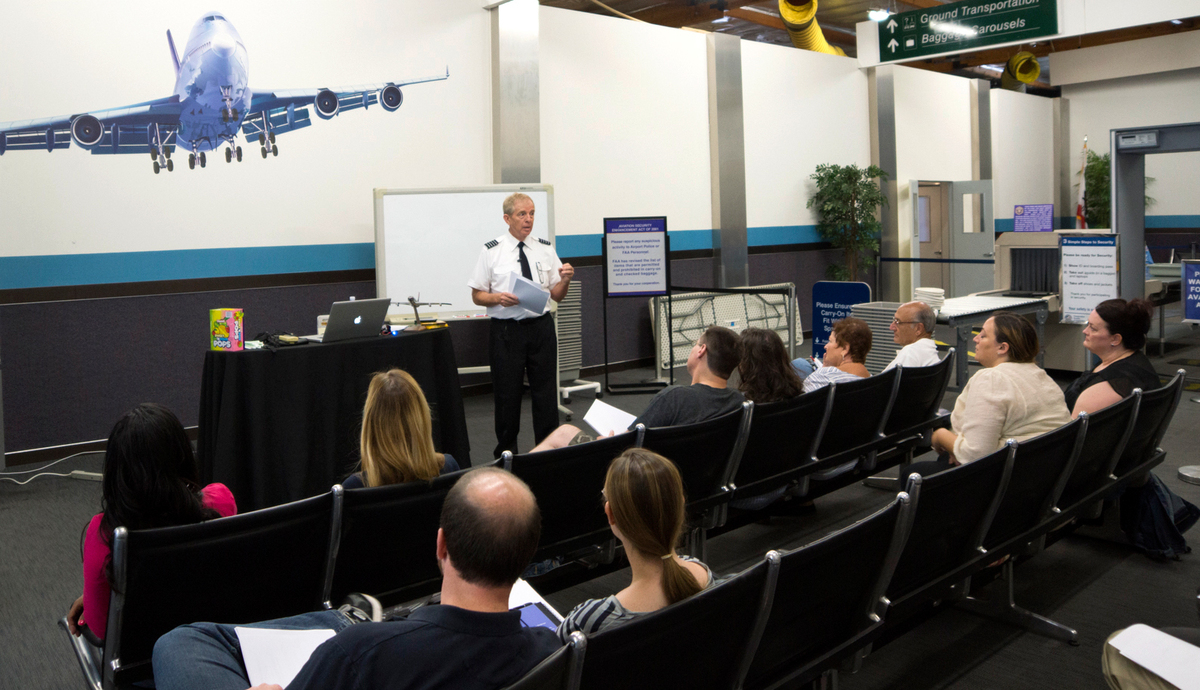 Ron Nielsen, a retired airline pilot, tells his class of fearful fliers in Southern California that crying can be a useful emotional release. If that's what they need to do, he tells them, "let 'er rip!"

The jet sitting at Air Hollywood's studio near the Burbank airport in Southern California was once the charter plane of the Los Angeles Lakers. These days, it serves a much different role — mostly as the set for movies and TV commercials.

But the group walking on board the day I recently visited wasn't there to film a scene. They were part of a two-day class for fearful fliers.

For participant Ronnie Michel, it was the first time in six years that he'd seen the inside of a plane.

"You hear the plastic shaking, the weird noises," he noted. "I can see the top of people's heads sitting in front of me. It's all familiar."

It reminded him of a previous experience — a flight he was once supposed to take from New York.

"I was about to board the plane — and I turned around and I bought a ticket for the Amtrak and took it all the way back to Los Angeles," Michel told me. "And I haven't been on a plane since."

Each person aboard that sound stage plane had at one time or another missed out — missed a vacation abroad, or a family reunion, or a job interview far from home. If it involved boarding a plane, each one had taken pains to avoid it — and wished they didn't have to. They regretted it enough to spend $500 each to enroll in a program on a sound stage — FearlessFlight at Air Hollywood.

Several of the people who'd signed up didn't show that day, which I'm told is pretty typical. One guy has signed up for every class in the last two years — but has yet to attend.

Ron Nielsen, better known as Capt. Ron, runs the show. He's a retired airline pilot who also flew in Vietnam. He's calm and lighthearted — perfect for this role. He has worked with fearful fliers for 29 years.

"I find the shame about not being able to fly often exceeds the fear itself," he told the class, now seated as "passengers" inside the grounded plane.

Nielsen did all he could to ease their fear — starting with a lot of information about aviation. After running through the mechanics of a jet engine, he moved on to everyone's favorite topic: turbulence.

Just as he muttered the word, the airplane cabin started to shake and everyone inside jumped. Though the plane seemed very real from the inside, it was actually sitting on a platform atop compressed bags of air, much like a mattress. The shaking wasn't from fancy hydraulics; Rob Shalhoub of Air Hollywood was standing next to the plane, jumping up and down.

Back inside, Koren Owens said all that movement was increasing her anxiety.

"My legs are a little shaky and weak," Owens said. "It doesn't feel good, no. And it's reminding me that tomorrow, I'm really going to be going through this."

Day 2 of the Air Hollywood training includes an actual Southwest Airlines flight from Burbank to Oakland.

Mikki Yuthas, a nervous 15-year-old who had driven down from Portland with her parents to take the class, was dreading Day 2, too.

"I'm thinking about how high off the ground we're going to be," Yuthas told me, "and how I'm enclosed and I can't get out." 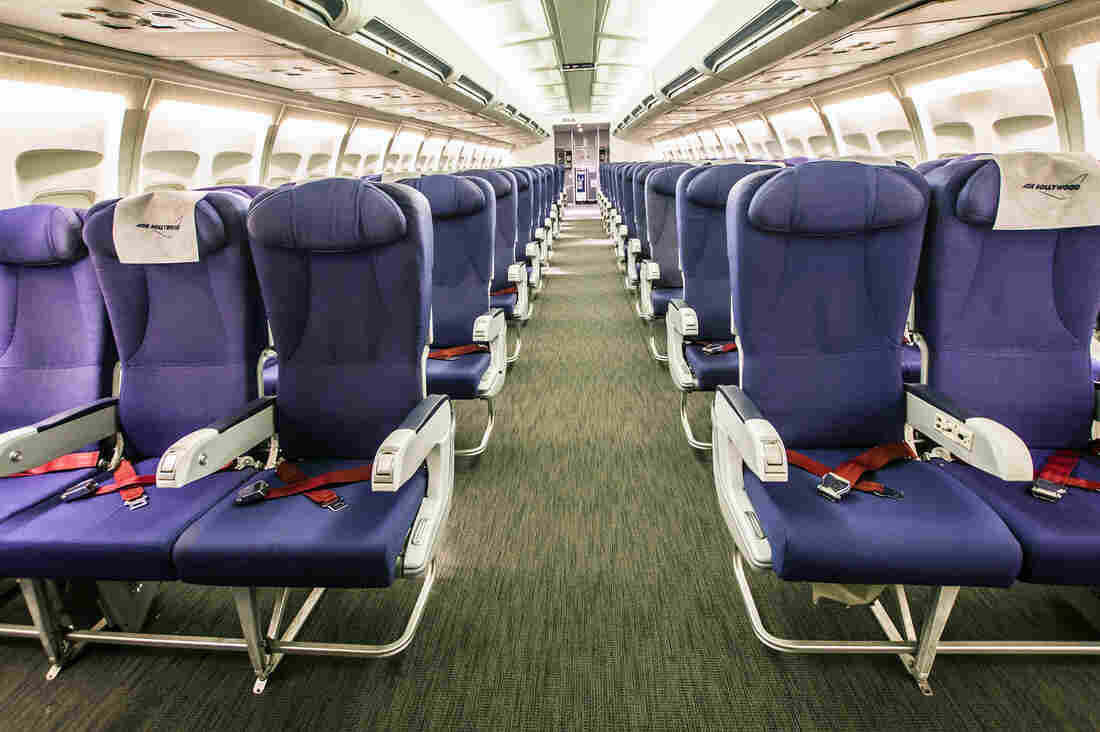 The 727 jet simulator sits in a sound stage near the Burbank Hollywood airport in Southern California. Courtesy of Air Hollywood hide caption 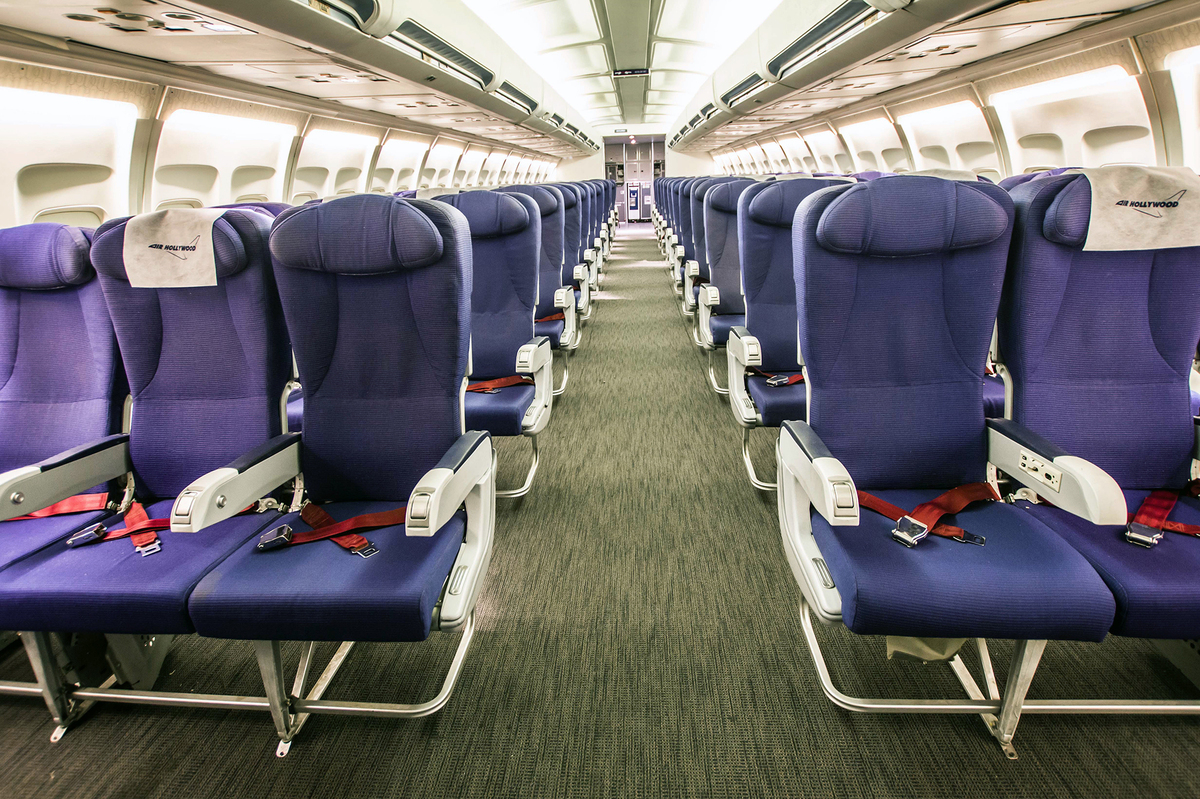 The 727 jet simulator sits in a sound stage near the Burbank Hollywood airport in Southern California.

"That's a theme that you hear time and again," Dr. Dave Baron, the interim chair of the Department of Psychiatry at the Keck School of Medicine at the University of Southern California, told me. He has lots of experience working with patients afraid of flying. The core of the fear is a deep sense of being out of control.

"It's way beyond a fear," Baron explained. "This is real — I mean, their heart races; they can't get their breath. It's absolute terror. And the next thing you know: 'I've got to get off the plane.' "

But most of the group that day was committed to hanging tough. The next morning, when the Fearless Flight group convened in the Hollywood Burbank Airport terminal, Owens clutched her boarding pass.

Capt. Ron told his class to just accept whatever they were feeling.

There was a lot of nervous banter among most members of the group. A couple others sat down right away and kept to themselves, alert to every announcement blaring over the intercom.

Moments later, the Southwest 737 pulled in and passengers headed down the gangway.

But just before she boarded, one woman in the class urgently pulled Capt. Ron aside. Everyone in the group turned to see what was wrong. She wanted to leave. Nielsen tried to talk her through what she was feeling.

"Just give me one inner-thought right now," he asked her. "Why do you want to run?"

She'd already made up her mind. She thanked the group and abruptly left the waiting lounge and the airport.

Meanwhile, inside the plane, a crowd of passengers wedged suitcases into every crevice. It was clearly going to be a full flight. We found our seats and buckled in, but the member of the Air Hollywood class seated right next to me seemed on edge.

His hands shook, and he kept looking around the cabin. Capt. Ron tried to get his attention from across the aisle, but the nervous passenger was beyond listening.

Suddenly, he, too, unbuckled his seat belt and walked off the plane.

Moments later, the door finally closed and our jet pushed back and headed for the runway. No more turning back.

As it happened, the flight was turbulent from the moment we took off. Some passengers grasped their armrests. Even for seasoned travelers, this was choppy.

But once we get above the clouds, the fearful fliers started to relax. Mikki Yuthas chatted with her dad, and Koren Owens laughed at Capt. Ron's jokes.

"Just sort of let the fear wash over and I'm remembering that I used to love to fly," another class member — Alex — told me. (For professional reasons he asked us not to use his last name.)

Alex had one of those foam travel neck pillows around his neck and felt calm enough to request an apple juice from the flight attendant.

"Hands are pretty still," he noted. "I'm not sweating. Should've done [this] sooner."

An hour later, the plane descended and we were in Oakland. As they stepped off the jetway, members of the class hugged and shared stories from the flight — finally able to release years of pent-up anxiety.

"I haven't been able to do this and I've missed opportunities," Yuthas said. "And now I can finally just get on a plane and not be like, constantly stressed and worried about it."

She was ready to hop on the flight home to Portland, she told her dad, John Bizjak and me. He put his arm around her.

"It was like her old self flying," he told me, with relief.

For everyone returning to Southern California that day, boarding the return flight was surprisingly easy. Suddenly, getting on a plane had become routine. It was just another take-off, another landing.

Nielsen, the man who piloted them through their fear, is the first to say that Air Hollywood's Fearless Flight program isn't a cure-all. Their next flight without him onboard would be another challenge, he told me.

But Baron, the USC psychiatrist, said the members of the class had taken a huge step, by learning techniques that gave them more of a sense of control in those situations "as opposed to having it be an emotional, runaway train."

For Nielsen, the next step is pretty simple.

"Sooner or later, you've got to get on the damn plane," he said. "And so people ask me, 'What's the most important thing for me to do to get over my fear?' I say, 'Book a flight.' "