Accessibility links
Can Trump Turn Pennsylvania's Disaffected Democrats Into Believers By November? Donald Trump argues his route to the White House runs through traditionally Democratic states such as Pennsylvania. But it's not clear the Keystone State will make that large an impact this fall. 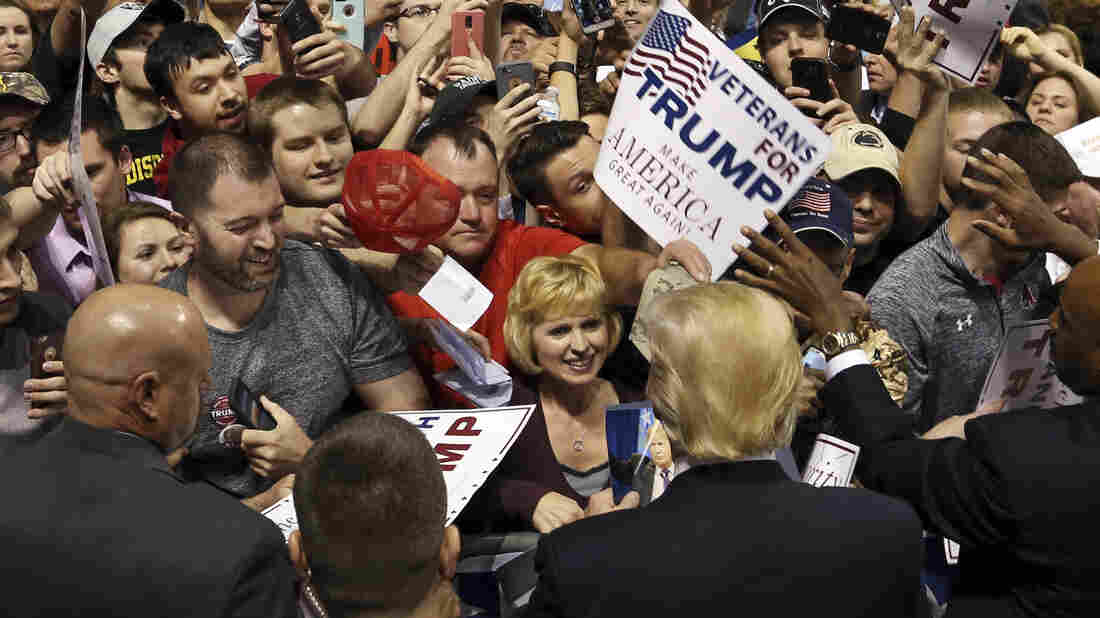 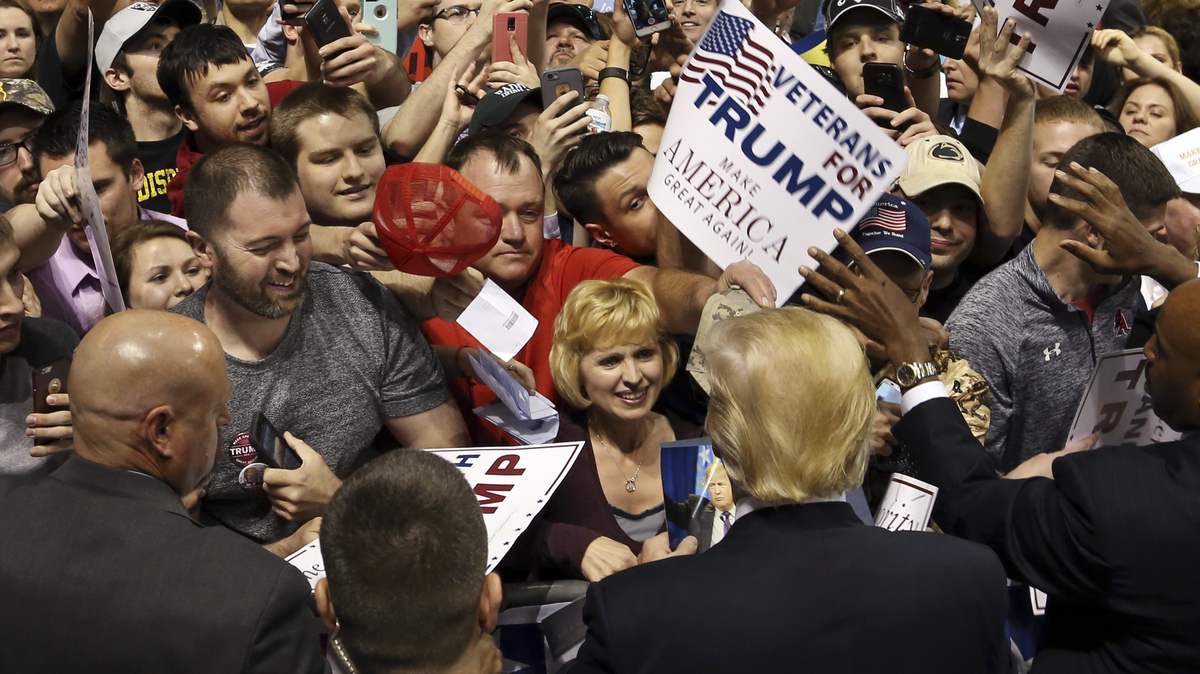 Walk around a Scranton/Wilkes-Barre Railriders game talking to Donald Trump supporters, and you'll hear a whole bunch of different reasons people in Northeastern Pennsylvania are supporting him.

Some Trump backers say they're worried about ISIS. Others say the economy is their top concern. But every person eventually returns to the same central quality he is most passionate about in the likely Republican nominee: the fact that he's not a typical politician.

"What a breath of fresh air," said Mike Zuby, who wore a "Pennsylvania For Trump" T-shirt to a recent game between the Triple-A Railriders and Pawtucket Red Sox. "To be able to wake up and at least know that someone's out there — the average and ordinary-type guy. He's not just a billionaire; he's speaking with total unpolitical correctness. He's speaking exactly what we want to be saying to this big monster called Washington."

People feel that Washington will never control him.

Republican Rep. Lou Barletta believes that outsider quality is what propelled Trump to a dominating win in Northeastern Pennsylvania last month. He represents the Scranton region in the House and was one of the first congressmen to endorse Trump. In Luzerne County, home of Wilkes-Barre, Trump won more than 77 percent of the vote. "People feel that Washington will never control him. And that's what they want," Barletta said.

The Trump campaign believes the road to the White House runs through places like Scranton. It's banking on reshaping the electoral map and carrying traditionally Democratic industrial states like Pennsylvania by riding a wave of working-class votes.

Barletta thinks Trump can be the first Republican to win Pennsylvania since 1988, pointing to the fact that more than 60,000 Democrats switched their party registration to the GOP before this year's state primary. "That's for Donald Trump," he said. "They weren't doing that to vote for Ted Cruz or John Kasich."

But winning Pennsylvania in November will be a very steep climb for Trump. The state has about 1 million more registered Democrats than Republicans. And while many of them stay home in other years, Pennsylvania Democrats typically show up en masse when there's a presidential race on the ballot.

"At the end of the day, I just don't think there's enough angry old white people in Pennsylvania to make up for the fact of what Trump is doing on the other side to motivate the Democratic base," said Christopher Nicholas, a longtime Pennsylvania Republican strategist who ran several campaigns for former Sen. Arlen Specter. "I hope I'm wrong."

"In a statewide election in Pennsylvania, you have to worry about how many votes you come out of Philadelphia and Pittsburgh down," he said. "Because at a certain point there's not enough votes in the rest of the state, in the other 65 counties, to make up for that. The math just doesn't work anymore." 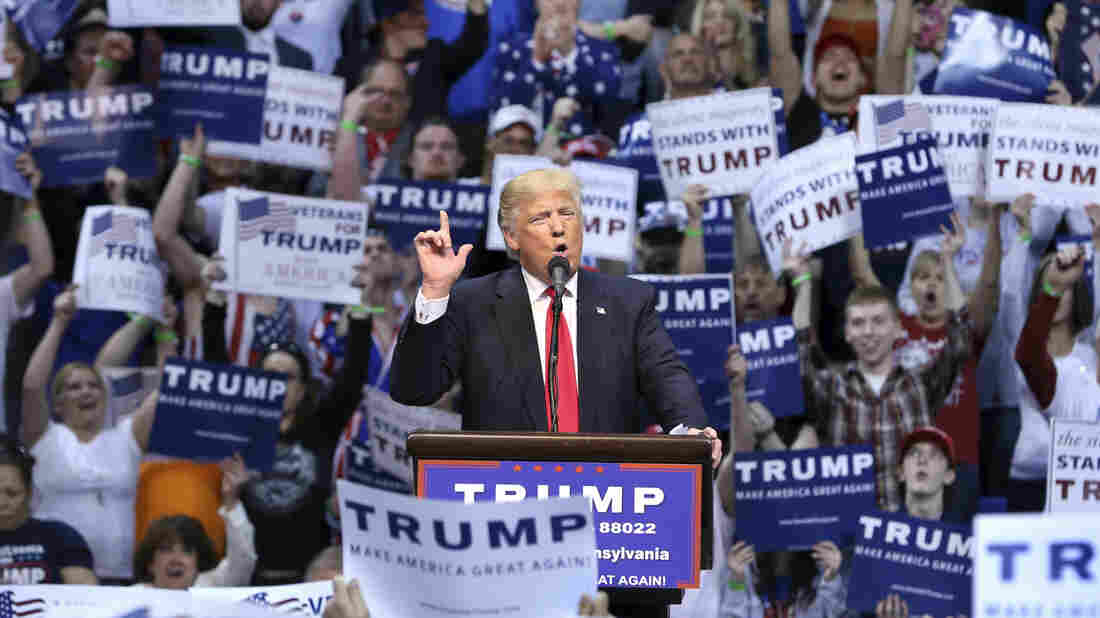 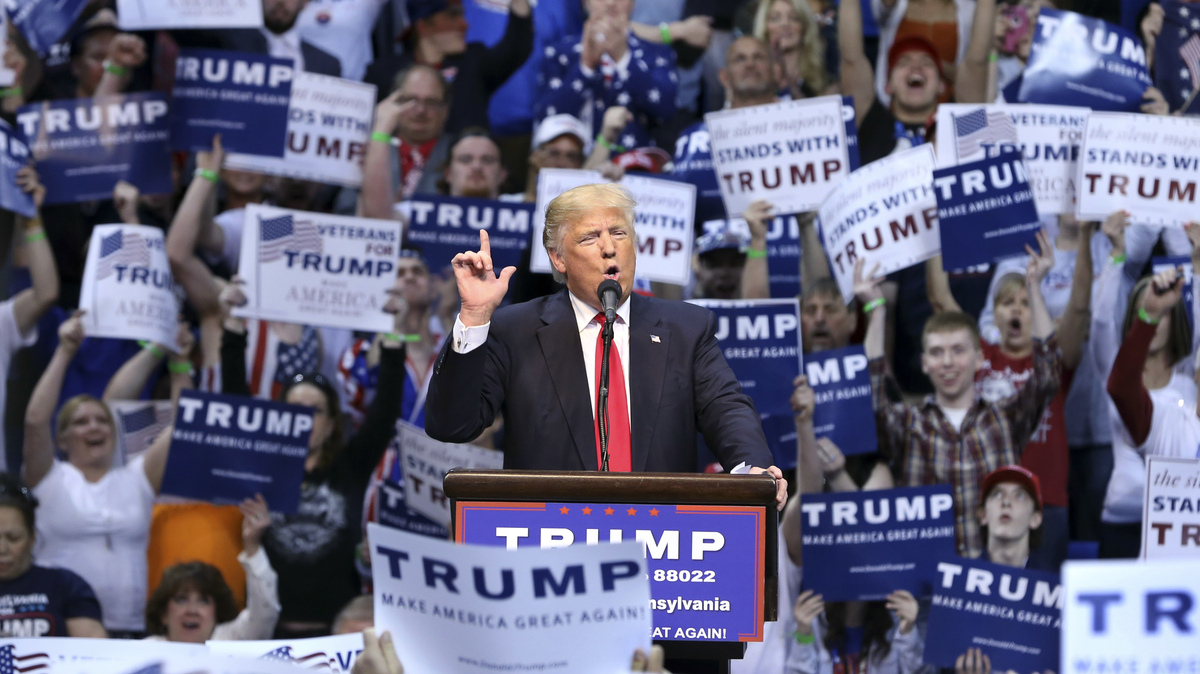 At the end of the day, I just don't think there's enough angry old white people in Pennsylvania.

Still, Rendell isn't dismissing Trump's play for blue-collar Democrats in Western and Central Pennsylvania. "There's no question that they're part of the angry slice of America," he said. "Many of them have lost their jobs because of manufacturing problems. Not just trade-related, but technology, related, etc. So I think he will be successful in taking some of those into his column."

But Rendell thinks that Trump's outside-the-box antics will also turn off moderate Republican voters — particularly Republican women — in the populous suburban counties surrounding Philadelphia. "I think he will wind up, my guess is, losing more of those type of Republicans than he gains in blue-collar Democrats," Rendell said.

If Trump is banking on winning Pennsylvania with a coalition of disaffected Democrats and Republicans who haven't been motivated to vote in previous elections, he'll need to track them down. But Trump recently dismissed the high-tech voter outreach efforts that have become a key part of modern presidential campaigns as "overrated."

"That's part of what makes me skeptical about Trump. He hasn't seemed particularly interested in building a big ground game," said Sarah Niebler, a political scientist at Dickinson College in Carlisle, Pa. "And I think that's what it would take in these rural counties. It's a lot of ground to cover — just physical voters — to find those voters, to register those voters, and to mobilize them to turn out in November."

Niebler thinks Trump would need to pull the political equivalent of a royal flush to win the Keystone State. "He would need to find new Republican voters that aren't currently registered, attract Democratic voters to vote for him, he'd have to win pretty much all the independents, or he'd have to win Republicans by a much wider margin than Clinton wins Democrats," she said.

But picking up Pennsylvania is Trump's most feasible route to the White House. "This path is dependent on Trump being able to use his populist, protectionist and anti-globalization rhetoric to fire up white, working-class voters affected by outsourcing in the Rust Belt and Upper Midwest," NPR Political Editor Domenico Montanaro put it in NPR's initial electoral college analysis last week.

In other words, expect Trump to make a lot of visits to places like Scranton, Johnstown, Altoona and Wilkes-Barre over the next six months.