Accessibility links
Review: PUP, 'The Dream Is Over' The Toronto punk band sounds anthemic and unhinged on its second album, with shout-along pop songs that are at once communal and cathartic.

Review: PUP, 'The Dream Is Over'

Review: PUP, 'The Dream Is Over' 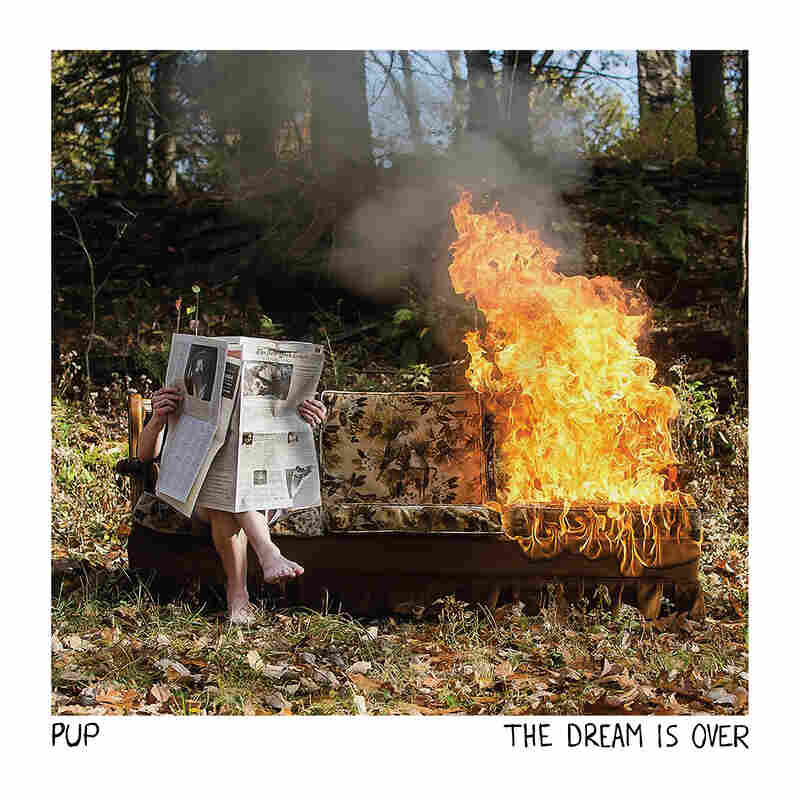 PUP, The Dream Is Over Courtesy of the artist hide caption

Derived from punk and hardcore, gang vocals are ostensibly group shout-alongs, wherein the studded choir responds to or joins the frontman with rapturous, violent barks. Even though gang vocals can extend to ska and metal, they rarely appear in pop music — or rather, when a pop song claims this sacred style, it's sterilized. On its second album, The Dream Is Over, the Toronto band PUP moves beyond its punk beginnings and turns into an anthemic and unhinged pop band. Oh, and there are gang vocals in nearly every track.

Where PUP's 2014 self-titled debut was a turbulent affair, The Dream Is Over sounds more controlled. Not that there isn't emotional turbulence here — in fact, much of Dream is about disillusionment, growing up and realizing that you can't get everything you want, starting with your bandmates. "If this tour doesn't kill you, then I will," guitarist Stefan Babcock meekly deadpans in the first moments of the album, before the track explodes into a bar-brawling punk sing-along. It's a hell of a way to open, but it's telling that in the moments when PUP's members need each other most — especially when Babcock yells, "But every line, every goddamn syllable that you say / Makes me wanna gouge out my eyes with a power drill" — they've got each other's backs by shouting a response, no matter how thoroughly messed-up.

After screaming every night for two years on tour, Babcock learned from a doctor that his vocal cords were shredded. ("The dream is over" were the words the doctor apparently used.) So to survive the BS that life throws PUP's members — Babcock on guitar and vocals, Nestor Chumak on bass, Zack Mykula on drums and Steve Sladkowski on guitar — they counter with dark humor and severe self-deprecation. This might be a standard millennial self-defense mechanism, but it works to PUP's benefit as deranged and heavy riffs tangle around crashing drums. The chaotically catchy "DVP" features a loser who calls up his girlfriend's sister, presumably drunk, with ohh-ohhh's that run away with the hyperactive chorus. The closing bait-and-switch — "She says that I drink too much / Hawaiian Fruit Punch / She says I need to grow up" — borders on the too-clever, but the gang vocal offers it up as a willfully silly nod to adolescence instead of as a knowing wink.

The jokes turn shades darker as The Dream Is Over carries on. The mariachi-flavored "Sleep In The Heat" mourns a failed relationship by way of the family car's death. It does the thing Pixies did without sounding at all like the Pixies, taking a heavy pop song about a heavy subject and buoying it with a spirited rhythm. "The Coast," with its bummer riffs and dive-bombing Drive Like Jehu-inspired switchbacks, looks to the ice thaw of the Great White North to find dead bodies, ending up as a metaphor for how life swallows you whole: "The lake gives us life and she takes it back." With a gigantic flag-waving chorus, "Can't Win" could easily be a Paramore anthem written for stadiums — except the flag is white, signaling surrender. "And it feels like I can't win / I'm growing up and I'm giving in / And it's starting to hurt."

"Pine Point," a lighters-up ballad about an abandoned Canadian mine, somehow offers hope in a deteriorating world. On such a lyrically and musically bombastic record, the song feels remarkably nuanced in the way it deals with death and memories, ultimately prizing a personal relationship. No one screams, but the implication is felt deeply. In spite of all of the confusion and sadness that surrounds The Dream Is Over, there's a communal and cathartic fellowship to these songs, even if that means scrambling over heads to grab the mic and shout along.