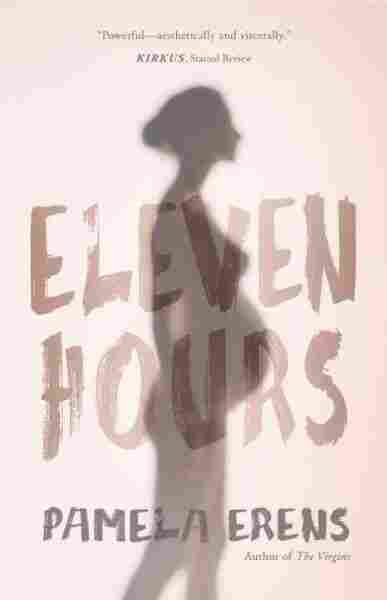 Pamela Erens' new novel, Eleven Hours, is what traditionally would be called a "small story." It's less than 200 pages, features only two main characters and focuses primarily on events that take place over the span of, well, 11 hours. It's also a novel about the ultimate female adventure of childbirth.

The book is fierce and vivid in its depiction of the exhaustion of the spirit and the rending of the flesh during childbirth. So much so, that it makes that boy adventure aboard Herman Melville's Pequod almost seem like a Carnival cruise.

Eleven Hours opens when a 31-year-old woman named Lore enters the maternity ward of a New York hospital all by herself. The nurse on duty is named Franckline — she's Haitian and around the same age. She, too, is pregnant, though few people know.

Franckline lost a baby shortly after birth and has also had a miscarriage. Lore's losses are of a different sort: Her mother, who died a few years earlier, was her only family, and her fiance, the father of her baby, had an affair with Lore's best friend and is now living with her. That's why Lore shows up at the maternity ward alone and so shut down.

From this admittedly contrived premise springs a tough and emotionally authentic story. Erens seems to be guided by the rule Jerry Seinfeld famously held fast to throughout the run of his show: "no hugging, no learning."

Lore and Franckline never open up and share confidences. Instead, with barely any conversation between them beyond that of practical necessity, they come to respect one another — as soldiers do — through their actions in the trenches of that hospital room, while hours pass and Lore's erratic contractions become more frequent.

About those contractions ... I have to say, as a woman who's never experienced the miracle of birth, Erens has quite a gift for making the pain of others felt. There are many and varied descriptions here of the harrowing process that Lore's body is enduring to get that baby out. One of the milder ruminations on birth occurs during this breather, while Lore is sucking on ice chips:

The universe cannot be good. A good universe could not include the forcing of her child half inch by half inch down the birth canal, its soft head squeezed misshapen by the hugging walls; could not include her own grotesque and agonized prying-open. These last months Lore has often woken in the morning aware of some fearsome fact she cannot quite place. She has groped uneasily until finally, with a stab of fear, she remembers again: The baby will have to come out. It will have to come out that way.

Franckline's own test of nerves occurs whenever she feels a twinge in her lower abdomen and fears that she is, once again, miscarrying. After an especially sharp stab in her groin, Franckline abruptly leaves Lore's bedside and goes to a nearby restroom. We're told that:

[Franckline] closes the stall door and pulls down her scrubs, her underpants. She already pictures the star-shaped print of blood on the cotton panel. But there is nothing there. ... Her stomach unclenches. But this is just one moment of reassurance, and there are so many more minutes — hundreds of thousands of minutes — to get through before the baby can be born.

Erens deftly widens her focus to flash back to scenes from Franckline's hard childhood in Haiti or Lore's wide-eyed belief upon moving to New York that she would find a longed-for world of culture and friends. In particular, the story of Lore's betrayal by her fiance and artsy best friend reads like a miniaturized version of a novel by Jennifer Egan or Claire Messud.

But after these brief breaks, the narrative quickly returns to that hospital where new life enters the world, or where, as Franckline says, despite all the medicine and machines, "souls ... [sometimes] so easily flee the body and disperse."

Those with delicate sensibilities should be forewarned: Erens never flinches here and in this incisive novel about birth, she bears witness to its beauty and brutality.