Accessibility links
Crowe And Gosling Bumble Appealingly Through 'The Nice Guys' Writer-director Shane Black's first feature script, Lethal Weapon, made him a star. His latest proves that he's still got the stuff when it comes to buddy-cop action comedy. 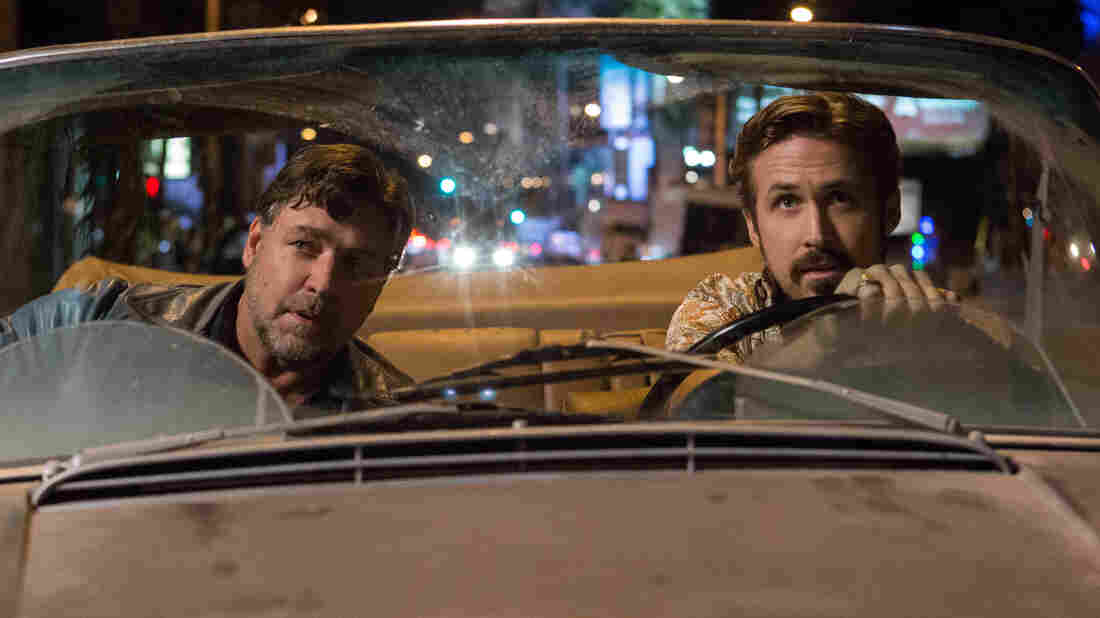 Russell Crowe and Ryan Gosling star in The Nice Guys, an action comedy from Shane Black — a writer-director who has long shown a fondness for sending up LA noir. Daniel McFadden/Warner Bros. hide caption 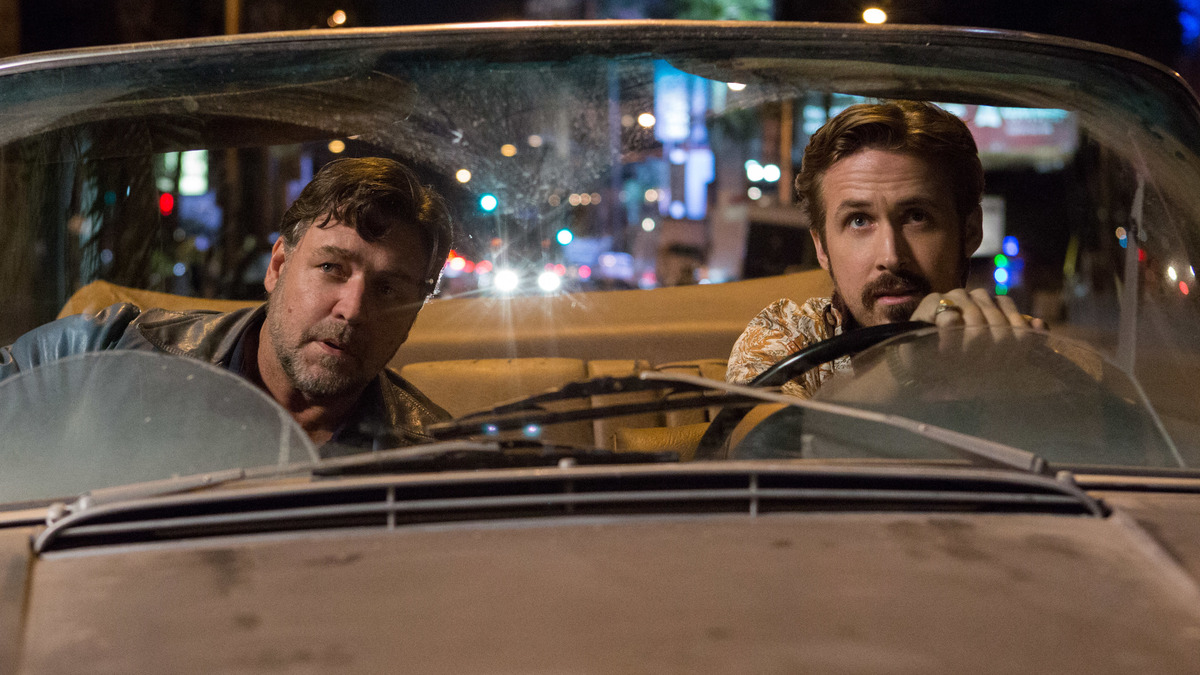 Russell Crowe and Ryan Gosling star in The Nice Guys, an action comedy from Shane Black — a writer-director who has long shown a fondness for sending up LA noir.

There was a time, in the late '80s and early to mid-'90s, when Shane Black was the highest-paid screenwriter in Hollywood — and one of the most widely resented, too. As a 24-year-old film brat wunderkind, Black codified the buddy action-comedy with his script for Lethal Weapon, and a series of commercial hits and misses followed, including Lethal Weapon 2, The Last Boy Scout, Last Action Hero and The Long Kiss Goodnight. At the time, it seemed like Black was being paid to inject more vulgarity and smarm into the mainstream, but the dialogue in those scripts — fast, clever, literate, referential — suggested a voice tied as much to Old Hollywood and dime-store fiction as the blockbuster trends of the day.

After a decade in the wilderness, Black returned with an electric directorial debut, Kiss Kiss Bang Bang, that clarified his old-school sensibility better than anything he had written in the past. He still loved the buddy-movie genre — the film's throwback quality started with the casting of Robert Downey Jr. and Val Kilmer in the lead roles — but the sheer musicality of the writing, with its dextrous wit and nested conspiracies, evoked the shaggy-dog tradition of LA noir, from The Big Sleep to The Big Lebowski. Once tagged as an overpaid purveyor of Tinseltown trash, Black had emerged as a bridge between two genre traditions, the noir and the buddy picture, that had long since fallen out of favor.

With The Nice Guys, his wildly entertaining new detective comedy, Black visits the smog-choked, libertine Los Angeles of the mid- to late 1970s, a few years and a few miles removed from private eyes like Elliott Gould in The Long Goodbye or Joaquin Phoenix in Inherent Vice. Only, The Nice Guys doesn't linger in the haze. It has the byzantine plot of an LA noir, but races through it with the breathless energy of Black's other work. From a simple missing-person case, the film opens up a full-to-bursting array of running jokes, ornate action set pieces, municipal schemes, and twists large and small. The only trouble is keeping up with it.

Each sporting wrinkled clothes and sloppily managed facial hair, Ryan Gosling and Russell Crowe star as Holland March and Jackson Healy, respectively, a pair of bottom-feeders-for-hire. A widower living in a rented house with his whip-smart pre-adolescent daughter, Holly (Angourie Rice), Holland is the type of private detective who takes retainers without investigating anything. Jackson doesn't have a PI license, but he ekes out a living as a thug-for-hire, slipping on brass knuckles and slugging people for cash. The two men meet when Jackson is hired to beat up Holland, but they eventually team up to search for Amelia (Margaret Qualley), a rebellious young woman who has gotten herself mixed up in a criminal plot much larger than she can control. The porn industry, the Big Three automakers, and the Justice Department all have their roles to play.

Black understands the mechanics of LA noir, which inevitably connect to City Hall like roots to a rotting tree, but the difference between The Nice Guys and Kiss Kiss Bang Bang is that he loses the self-commentary and mostly plays the genre straight. But just because he doesn't point out the cliches he is defying doesn't mean he's not defying them all the same. One of the pleasures of The Nice Guys is the countless small ways in which Black upends expectations, like emphasizing his heroes' cravenness in the face of serious danger or pulling a twist on the familiar action-thriller shot of men jumping into a pool from a hotel balcony. Black knows every trick in the book and he assumes the audience does likewise.

Gosling and Crowe are a winning team — one a flaky slacker, the other a dumb brute — but of the two, Gosling's comic performance, on the heels of his scene-stealing turn in The Big Short, is a knockabout delight. For all the liveliness of the dialogue, it's Gosling's physical shtick that pays the biggest dividends, from his hapless attempts to cover himself after Crowe confronts him in a bathroom stall to a full-on Lou Costello routine when he comes upon a dead body. And true of a many an LA sleuth, he presents himself as a lazy dope, but in crucial moments, proves to be considerably more sly than expected. The Nice Guys does likewise.