Accessibility links
TSA Head Visits Chicago Airports In Effort To Reduce Long Security Lines The head of the TSA is in Chicago Friday, trying to mend fences with city leaders and angry airline passengers who have been stuck waiting for hours to get through security checkpoints. 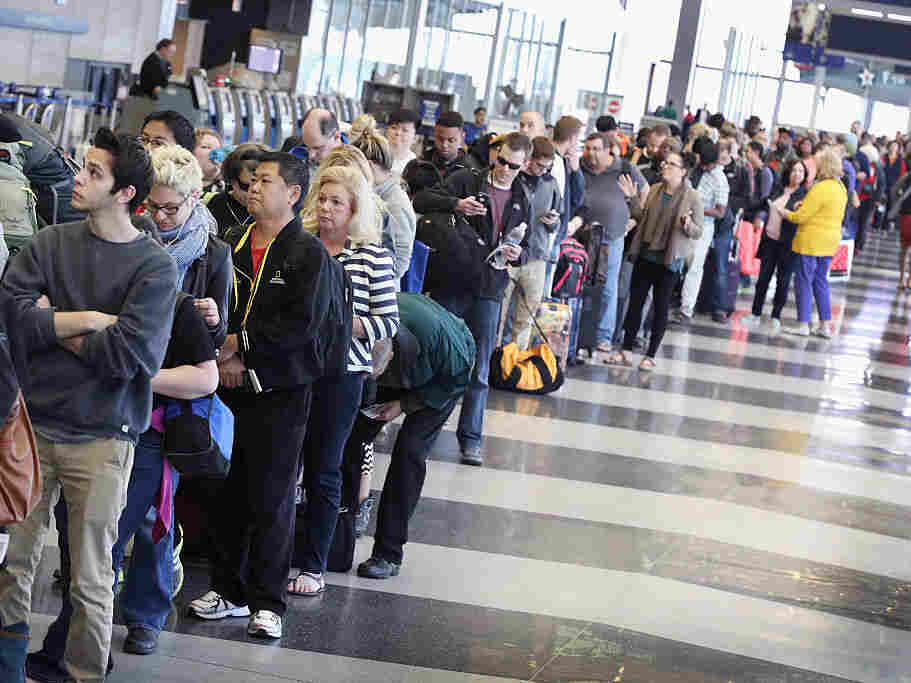 Passengers at O'Hare International Airport in Chicago wait to be screened at a Transportation Security Administration checkpoint on May 16. Scott Olson/Getty Images hide caption 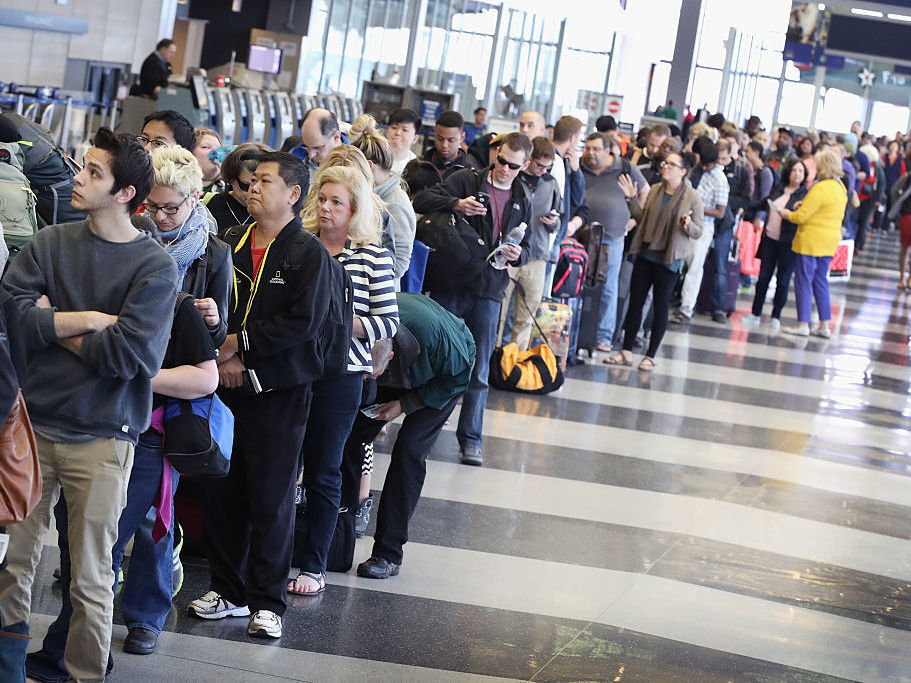 Passengers at O'Hare International Airport in Chicago wait to be screened at a Transportation Security Administration checkpoint on May 16.

The head of the Transportation Security Administration is promising the agency will do a better job of staffing enough officers at airport security checkpoints to reduce long lines. But he says those long lines are likely to continue through the peak summer travel season.

Travelers at some airports have been waiting two to three hours or more to get through screening. As a result, thousands have missed their flights in recent weeks.

The problem has been particularly bad at Chicago's airports.

The security checkpoint line Sunday night at Midway stretched all the way to the airport's transit station. At O'Hare, two- to three-hour waits forced 450 passengers to miss flights on American Airlines alone.

"Earlier this week, we had a breakdown here in Chicago and that was unacceptable," Neffenger said. "I am very sorry to those people that did that, and we are working very hard to make sure that doesn't happen again."

"It was a big day for volume, but it was not an unpredicted big day for volume. People arrived early as they've been recommended and uh, we, quite frankly, simply put, did not have enough checkpoint lanes opened when they arrived. And once behind, it takes a long time to catch up."

In fact, some airlines officials and passengers say the TSA was actually closing lanes as the lines grew on Sunday, because screeners had reached the end of their day and overtime hadn't been approved.

Neffenger says policies are being changed and more overtime is authorized so that doesn't happen again. In addition, he is sending more bomb-sniffing dogs and dozens of additional security officers to Chicago.

He says 100 part-time employees are being made full time, and hundreds of new officers are being hired this summer in Chicago and at other busy hub airports all around the country that have had similar problems.

But overall TSA staffing levels are down 10 percent from 2013, while demand for airline travel is now reaching record highs.

"I think we need to increase the staff size of TSA to meet all the demands of the growing travel population," says Neffenger, who adds that changes to security protocols, already ratcheted up after the terrorist attacks in Brussels, might be needed again "as we learn more and more about what might have happened to EgyptAir, as well as what we already know has happened to other aircraft."

After all, Neffenger says, ensuring safe air travel is the agency's top priority, and that means long waiting times at security checkpoints may remain.

"I think this summer is going to continue to be a challenge," he says. "I think you'll still see crowds in airports but my goal is to keep you moving. We can't have a situation like we had here in Chicago again."

That stark reality worries many of the nation's airlines heading into the busy Memorial Day weekend and summer travel season.

Some airlines have their own workers and contract employees taking over non-security-related functions for TSA agents in and around the checkpoints.

But travelers are bracing for the worst

Jack Weir of Wilmington, Del., says because of the long delays getting through security in Chicago and elsewhere, he now arrives two or three hours early, even though he is enrolled in the TSA's Pre-Check program which, for an $85 fee, speeds travelers through more quickly. But the 52-year-old points out that when traveling for business, "time is money," so "you have to plan accordingly and you can spend less time making sales calls or visiting."

"I don't think I should have to wait that long in line," says Chicagoan Katelyn Delany. "Just travel anyway is stressful, so I think getting to the airport and having to wait in these extra long lines, people missing their flights, it's pretty crazy."

Delany is heading to Nashville with friends for the weekend and she arrived at O'Hare 2.5 hours early. Add to that the hour of travel to the airport from her home and almost an hour and a half in the air, and Delany is spending about five hours flying to a city that takes six to seven hours in the car.

"I know. It just doesn't make sense anymore at this point. We all should've just jumped in the car and gone, but we booked these flights a few months ago."

That was before she knew brutally long security lines would be such a big hassle.