'Girls On Fire' Is Terrifying, Upsetting And Beautiful

'Girls On Fire' Is Terrifying, Upsetting And Beautiful 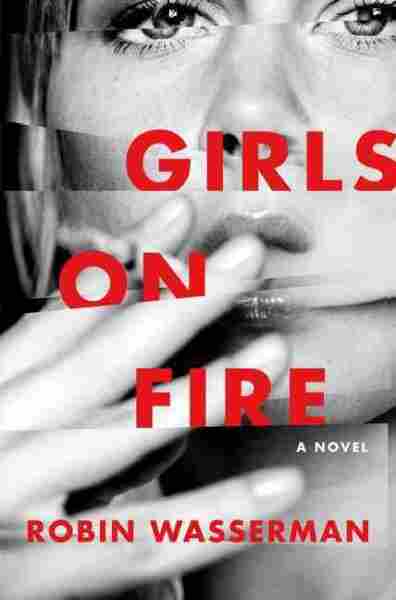 On the first page of Girls on Fire, author Robin Wasserman asks us to imagine a group of teenage girls on a bus. "Give in: Pick a pair of them, lost in each other, a matched set like a vision out of the past," she writes. "Nobody special, two nobodies. Except that together, they're radioactive: together, they glow."

The two nobodies at the center of Wasserman's novel — set in a small western Pennsylvania town in the early 1990s — are Hannah Dexter and Lacey Champlain. They form a friendship based on their mutual hatred of popular classmate Nikki Drummond, their high school's mean girl in chief.

Lacey is a newcomer to the town of Battle Creek; with her grunge sensibilities and adoration of Kurt Cobain, she's treated with suspicion and mild curiosity by her new schoolmates. Lacey takes a liking to Hannah, whom she renames "Dex" — Hannah, who has spent years without a close friend, is happy for the attention. "I'd been lonely for so long, I'd forgotten that I was," she muses.

The two girls loathe Nikki, who hasn't become any nicer since her boyfriend, Craig, committed suicide on Halloween. "[Craig] was nothing to me, or less than," Hannah recalls, while Nikki, even in mourning, "only became more fully Nikki. Not purified but distilled: essence of bitch."

Lacey and Hannah quickly grow devoted to each other, to an unsettling degree, as Lacey becomes interested in Satanism, at one point baptizing her baby brother with an upside-down cross, drawn in the blood from a raw steak. Hannah's mother has serious misgivings about the friendship, but her father grows close — maybe too close — to his daughter's new friend.

It wouldn't be fair to reveal too much of the plot of Girls on Fire. The first adult novel (and with its scenes of sex and violence, it's very, very adult) from young adult author Wasserman, much of its power depends on the suspense that she carefully constructs. That's not to say this is a run-of-the-mill thriller; it's a perfectly constructed literary novel, but one that dares its readers to put it down.

It's exceedingly difficult to put Girls on Fire down, even for a few minutes, but toward the end, it's almost painful to keep reading.

And it's nearly impossible to put down. Much of that is because Wasserman's characters are so flawlessly realized — Hannah is an appealing everygirl, Lacey is compelling and terrifying, and Nikki is surprisingly complex, a sadistic manipulator who may or may not actually have a good heart.

All friendships have their ups and downs, but for teenagers, those are writ large. Wasserman's portrayal of the relationship between Lacey and Hannah is beautifully done — the two become dependent on each other, and fantasize about moving to Seattle and getting "a beanbag chair and a cat named Ginsberg.

Their fantasy becomes all-consuming. "We would be orphans; we would be ghosts," Hannah thinks. "We would disappear from the mundane world into one of our own making. We would be wild. We would be free. This was the promise we made to each other, and this, if nothing else, we would keep."

It's exceedingly difficult to put Girls on Fire down, even for a few minutes, but toward the end, it's almost painful to keep reading. That's not because of Wasserman's writing, which is poetic and beautiful, but because it quickly becomes apparent that a happy ending isn't in store for any of the characters. The reader knows that bad things are coming; the nature of those bad things is unclear, though, right until the shocking, masterful ending.

Wasserman does so many things right in Girls on Fire, it's hard to count them all. She's a tough but empathetic writer, and she portrays Hannah's feelings for her new best friend without a trace of adult condescension: "I wanted to remind [Lacey] what she'd taught me, that life was only as cruel as you allowed it to be, that Battle Creek belonged to us by choice and we could choose to abandon it. ... I wanted, most of me wanted, to save her."

Wasserman's novel turns the Satanic panic of the Reagan-Bush years on its head, and the result is a novel that's terrifying, upsetting and hypnotically beautiful. There's not a false step in it, and you never want it to end, although you know it has to. Girls on Fire is an inferno — it's brutally gorgeous, and you know it could explode anytime, but you can't turn away, even for a second.