Accessibility links
Book Review: 'Letters to Kevin' By Stephen Dixon Stephen Dixon's new book is a loopy, madcap tale with a simple premise: A young man is trying to call an old friend. But he's foiled at every turn, by a series of events that get increasingly weird.

'Letters To Kevin': What We Have Here Is A Failure To Communicate

'Letters To Kevin': What We Have Here Is A Failure To Communicate 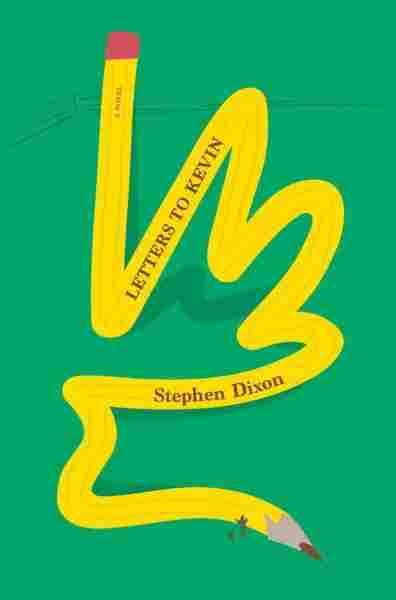 Known mostly for graphic novels, Fantagraphics has ventured occasionally into prose — including His Wife Leaves Him, the 2013 novel by award-winning author Stephen Dixon. Letters to Kevin is Dixon's second book for Fantagraphics, and while it's also a work of prose, it veers a bit closer to the publisher's wheelhouse: It's profusely illustrated by Dixon himself. It's a risky move; most of Dixon's rudimentary sketches are of the don't-quit-your-day-job variety. But they bring an extra dose of loopy, madcap charm to a book that's already plenty unhinged — although not always in a good way.

The novel's premise is as simple as it is ripe with comic potential: a young New Yorker named Rudy Foy decides to get in touch with his friend Kevin Wafer in Palo Alto, only to be foiled at every turn — and always absurdly. Rudy attempts to call Kevin, only to realize his pillow doesn't work like a phone. He tries a payphone but gets trapped inside before it's whisked away to a warehouse in Alaska. Figuring he must see Kevin in the flesh if he ever wants to speak to him again, he tries convincing a cabbie to take him to the airport; a farcical exchange of currency, wit, and inverted logic ensues. From a cabin in the woods to a submarine that travels under the continent, Rudy finds himself in all sorts of bizarre settings and conveyances. One thing drives him: He must reach his friend at all costs and, you know, catch up with the guy.

As its title implies, Letters is an epistolary novel. In a funny twist, the letters that comprise it — penned by Rudy and addressed to Kevin, documenting his odd odyssey across America — are all written on Rudy's antique typewriter, which he carries with him wherever he goes. Dixon notoriously writes all his novels (Letters included) on exactly such a typewriter, which makes it hard not to view Rudy as a surrogate for the author. If so, Dixon might be a very frustrated man: Poor Rudy is tripped up again and again by uncaring, intractable people, too wrapped up in their routines and institutions to offer him any real help. At one point he tries to catch a ride from a politician — and winds up, innocently enough, jumping on a literal bandwagon.

Wordplay and ludicrousness abound in 'Letters.' Rudy's entire journey is a tower of absurdities, each one thrown precariously on the one that came before.

Wordplay and ludicrousness abound in Letters. Rudy's entire journey is a tower of absurdities, each one thrown precariously on the one that came before. But the book's wackiness grows rickety as it moves along; much of it lapses into a repetitive, episodic rhythm that starts to make all the weirdness seem routine. "Let me write about it before I forget it," writes Kevin at on point, "because if I write about it after I forget it, there won't be anything to write about." It's one of many cute little brain-twisters; they just don't add up to much, especially after the book settles into its rambling groove.

If Letters' shaggy-dog status is ever in doubt, it's dispelled by the ending, an anticlimactic shrug of a conclusion that feels unsatisfyingly hollow. To make things worse, the final pages are rendered in an invented language called Giffiggof that comes across like an afterthought rather than an integral part of the story. At least Giffiggof isn't hard to read — no more so than, say, Pig Latin. Maybe it should be more difficult; the whole book cries out for a more challenging, better developed execution of its basic idea. A wide streak of the whimsical strangeness of Lewis Carroll and Shel Silverstein runs through Letters, but not enough profundity or poignancy. Dixon, however, does succeed in delivering a breezy, goofily illustrated road-trip of a tale, even if the book's bigger message — something about the futility of communication and the fruitlessness of pursuit and desire — gets a little lost in the lunacy.