Accessibility links
Interview: Joe Hill, Author Of 'The Fireman' Novelist Joe Hill's latest, The Fireman, is an apocalyptic plague tale about a pathogen that makes sufferers explode. He says his father Stephen King has had a great influence on his storytelling. 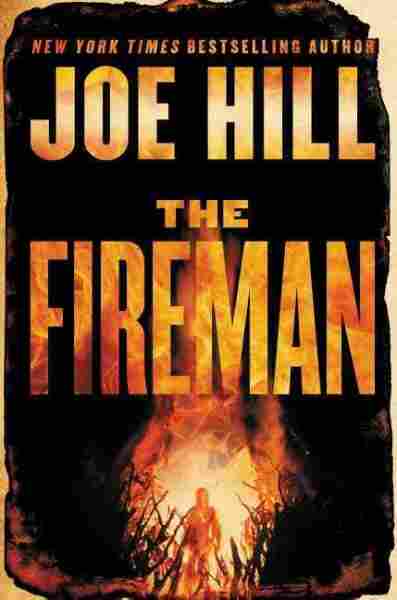 Novelist Joe Hill has a pronouncement to make: "The world is really divided into two kinds of people. People who adore plague novels and wimps."

And even if you're one of those wimps, Hill's newest apocalyptic plague novel — called The Fireman — may catch your attention with its strange premise. A highly contagious pathogen is burning across the country; it's known colloquially as Dragonscale, for the lovely black and gold marks that appear on your body — but eventually, you'll burst into flames. "My story focuses on a single person, Harper ... who is a school nurse, who comes up infected and pregnant," he tells NPR's Rachel Martin. "She knows that there's a chance for her baby to be born healthy, if she can just last nine months. So she determines to survive, even with the world going up in flames around her."

On why he chose Harper as his main character

You know, I'm not sure exactly why I settled on her. I know I wanted to write about pregnancy. I do think it's kind of interesting, the idea of a life forming inside you and hijacking your body's biology to serve its own ends. And when I began to think about the dragonscale as this sort of living organism painted on your skin, that's making use of your biology, I saw a connection to that ...

The other thing is, is Harper is very sunny and optimistic, and so many end-of-the-world stories are grim and bleak, which is totally understandable 'cause it's sort of a grim subject, but I like the idea of this plague as an unstoppable force pouring over the nation, and I sorta had this picture of Harper as the immoveable object it would dash itself against.

On his dad, Stephen King

My book does carry a lot of echoes of 'The Stand,' which is a novel that I adored, and you know, I sometimes joked that the book is 'The Stand' if it was soaked in gasoline and set on fire.

I, you know, I hope he'll keep at it and write some more stuff, because this is a guy who's got a real future!

My book does carry a lot of echoes of The Stand, which is a novel that I adored, and you know, I sometimes joked that the book is The Stand if it was soaked in gasoline and set on fire.

On what it was about his family that stimulated creativity

Happiness, I think. It was a really happy family, and it sounds very 19th century, but when we were finished with dinner we would go into the living room and pass a book around and read aloud; that's how I read the Chronicles of Narnia, that's how I first read H.P. Lovecraft. There's a great Jay Leno joke where Jay Leno says, you know, Stephen King says to the kids, let's all have a bedtime story, and the kids all go NOOOO! Actually, my dad told hysterical bedtime stories — I remember he wrote one called "The Fart Cookies," which was about three children, Naomi, Owen and Joe, whose parents were sick, and they went to a witch for help. And she gave us cookies, and you ate them and you began to fart out of control. So he told the best bedtime stories in the history of bedtime stories.

On his childhood fears

I was an anxious kid. I struggled with anxiety for years and years, into my 20s. In a lot of ways, that's why I wound up writing as Joe Hill. When I was in college, I had an anxiety that I knew I wanted to be a writer, and I was afraid I'd write mediocre fiction that would get published anyway ... I needed to know for myself, for my own confidence that when I sold a story, that it sold for the right reasons, that an editor was genuinely psyched about it.

What I really liked was ghost stories, and at a certain point, I realized, hey, no one knows who you are, and if you want to write a ghost story, you have permission now. You're not Stephen King's son anymore, you're just Joe Hill ... But the truth is, I love my dad. I'm an enormous Stephen King fan, we talk every day, and there's never going to be a writer who's influence is going to be on my work like his.

If you don't have something like that at the end of the chapter, where people feel excitement to go on, there's a horrible danger that they'll put the book down and turn on YouTube. I mean, have you ever looked at YouTube? All the cat videos and funny mashups and stuff? It's a tough world out there! You have to fight. You have to put the gas pedal down on the first page, and keep it there, or you'll lose them.