Accessibility links
Parade Of Goofballs 2016: Can JoJo Find A Prince In A Haystack? It's that time again. A fresh bachelorette has to make her way through 26 men, hoping to find a good one, and we have some thoughts.

Parade Of Goofballs 2016: Can JoJo Find A Prince In A Haystack?

Parade Of Goofballs 2016: Can JoJo Find A Prince In A Haystack? 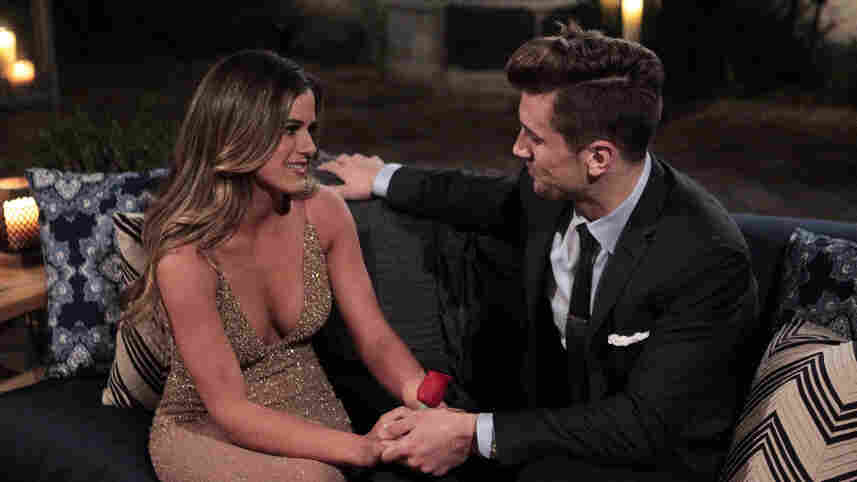 JoJo Fletcher and Jordan the football player/brother in the kickoff episode of the new season of The Bachelorette. Rick Rowell/ABC hide caption 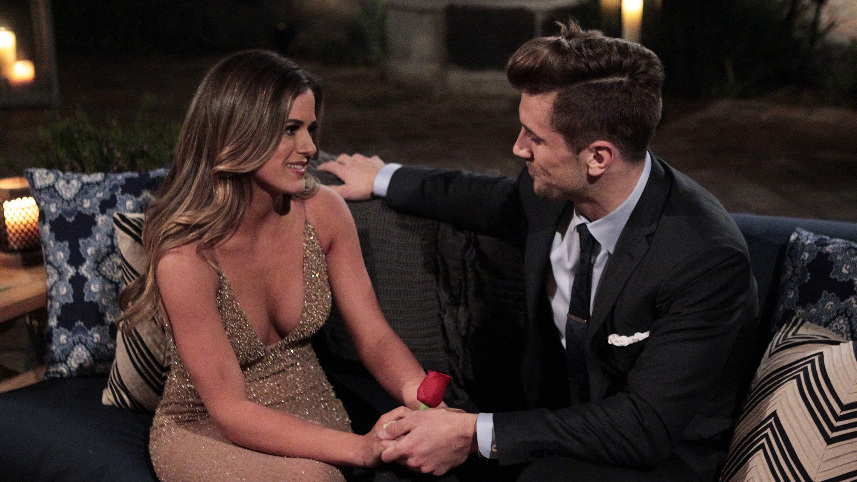 JoJo Fletcher and Jordan the football player/brother in the kickoff episode of the new season of The Bachelorette.

A Parade Of Goobers: 17 Actual People Presented To 'The Bachelorette'

We're all counting on you, JoJo. Let's look at your options.

1. The night starts with Jordan, who is the brother of Packers quarterback Aaron Rodgers and a former football player himself. Jordan looks quite a bit like his brother, if you crossed his brother with a skinny-pants Brooklynite, and he's my early frontrunner.

2. Derek is a Florida banking guy who tells JoJo that he appreciates how "grounded" she is, which is a little like meeting someone in a doomsday cult and being like, "You seem upbeat; I'm into that."

3. Grant the firefighter promises not to two-time JoJo by falling in love with another girl the way Ben did. Of course, Ben had other girls around. Put that fire out, Grant, and we'll talk.

4. James F. is a boxing club owner. "I didn't come here for a rose, I came here for a relationship," he says, and I salute him for coming up with mild alliteration as his gimmick, given that it could have been so, so much worse, as we will see.

5. Robby is a "former competitive swimmer" who brings his own wine. As the evening will show, this is the equivalent of going to an Olive Garden with a jar of cream sauce in your pocket. They drink his wine straight from the bottle, which he says is a family tradition. Based on that, I'm not sure if he's going to marry JoJo, but, spoiler alert: there are going to be some dudes at this cocktail party with whom I think he'll get along great.

6. Alex is a broad-shouldered U.S. Marine in a checked tie. That's about it.

7. Will is a civil engineer whose introduction of himself has three stages. First, he gets out of the limo with a stack of index cards. This doesn't seem good. Then, he drops them. This seems worse. But then, it turns out dropping the cards is his setup for a dreadful bit of shtick where he says things out of order, which gives the whole thing the feel of the comedy you hear during the welcome remarks at a corporate retreat. Oh, Will. (Later in the evening, Will jokey-jokey backs her into a kiss so awkward that lovebirds around the world spontaneously drop dead and no one knows why.)

8. Chad is a "luxury real estate agent." Chad will be an exhibit one day in the class action lawsuit of Actual Guys Named Chad v. Movies And Television, in which the worlds Chads sue for damages based on the fact that every Chad who shows up in popular culture is a goofwad. This Chad is a mean goofwad and is clearly the season's nasty heel. Or, in television terms and the terms sometimes used by women who have never dated a nasty heel, the season's "bad boy." Suck on a sea urchin, Chad.

9. Daniel is listed as having the occupation "Canadian." You have to admit, the visa application for that job has to be pretty easy, because you legitimately cannot get an American citizen who can do it. Daniel's gimmick is quoting the "damn, Daniel" meme from a while ago, which makes him ... whatever is past dated. Post-dated? (Later in the night, he will get insanely drunk, take most of his clothes off, and still get a rose. Now that is an alien of extraordinary ability.)

10. Ali is a bartender who calls JoJo "breathtaking" and cannot move his frozen smile.

11. James Taylor is a singer-songwriter. He is not that James Taylor the singer-songwriter, although you must admit that would be a pretty impressive twist. Every week, he'd sing "Fire and Rain" and make pharmaceutical sales reps cry. Anyway, this James Taylor tells JoJo she is "way more prettier" than on TV, so I'm guessing his songwriting has some extra syllables in it.

12. Jonathan tells Jojo he is half Chinese and half Scottish. His Scottish half is wearing a kilt, which is later treated like the weirdest thing ever by a bunch of dudes who quote Vines and introduce themselves by drinking wine out of the bottle.

13. Nick shows up dressed as Santa. It takes a lot for me to look at a man arriving on the first night of The Bachelorette and say "WHERE IS YOUR DIGNITY, SIR?", but he's ... he's dressed as Santa. And he keeps saying "Jo-jo-jo-jo." Do you get it? Later in the evening, there is some effort on the part of the producers to allude to some sort of holiday kink, but I lack the strength to go on. (Jordan the football player/brother earns my temporary affection when JoJo later tells him that she's so lucky, because she'd never have met all these guys in her normal life, and he says, "Even Santa? I bet you've been waiting to meet him since you were a little kid.")

15. Jake is a landscape architect. He's cute and they barely show him. He's probably too normal.

17. "I'm hoping I'll be the one that's able to take you off the market," says Coley the real estate consultant. But his heart isn't in it, because how could it be? "That's a good one, Coley," says JoJo, while leaning her entire body away from him as if he's covered in toxins.

18. Brandon's listed profession is "hipster." He tells JoJo he didn't see her season of The Bachelor. HE PROBABLY DOESN'T EVEN OWN A TV! Finally, they have matched an occupation with a person who seems perfectly suited to it.

[At this point in the evening, Robby, who is inside at the cocktail party, says, "We have a modge-podge of guys here." Decorative and sticky?]

19. James S. has the listed occupation "Bachelor Superfan." Me too, James. Me too.

20. Nick S. is a software salesman who does the splits, likes to dance, and later gets so bombed, so hammered, so deeply and profoundly pickled, that he interrupts JoJo's interview with the producers.

21. Vinny is a barber who says he doesn't have champagne, but he does have a toast. His toast turns out to be a piece of toast. So now he's just a bro in a suit standing there holding a piece of toast. If I were JoJo, I think I would struggle not to look right at him and say, "Does it still seem like a good idea?"

22. Peter, a staffing agency manager, gives JoJo a heart-shaped pillow and says, "Here's my heart." It's very painful seeing them try to figure out how to integrate a cliche with a gift. What would be really fun would be if a dude came up and said, "JoJo, they always say a picture is worth a thousand words. Anyway, here's a bag of cash."

23. Evan is an erectile dysfunction specialist.

24. Okay, let's discuss Wells. Wells is a Nashville radio DJ. He brought musical accompaniment in the form of the quartet All-4-One, whom you might remember from the 1994 single "I Swear." Wells looks like ... if you imagine an app that only sent birthday greetings to moms, Wells would be the developer of that app.

25. Christian is raising his two brothers, which is way more interesting than the fact that he pulls up on a motorcycle.

26. Luke is a war veteran who pulls up on a horse with a unicorn horn strapped to its head. He has season 4 Brandon Walsh hair, and if you get that reference, you know it's a dire thing. JoJo likes him right away, too. "I'm glad you're here," she says. "Wait, wait, what's your name again?"