Accessibility links
Climate Change Has Raised The Sea Level And Pushed Salt Water To Contaminate The Florida Everglades Rising sea levels put extra pressure on coastal bedrock in South Florida. Eventually, as seawater moves in, it could contaminate plants on the surface and the region's stores of freshwater beneath. 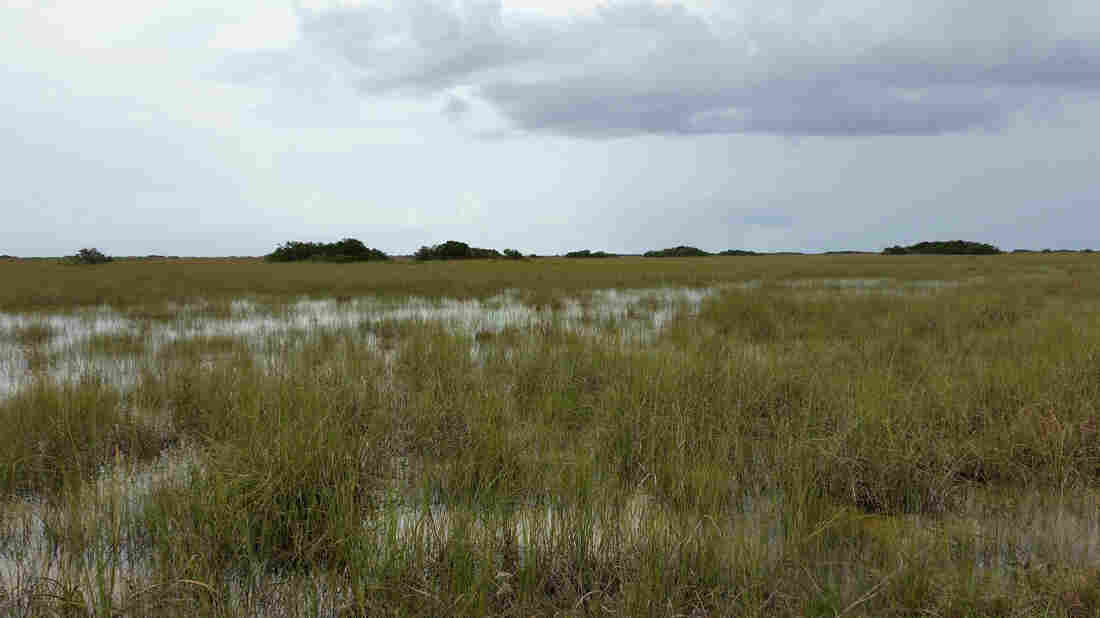 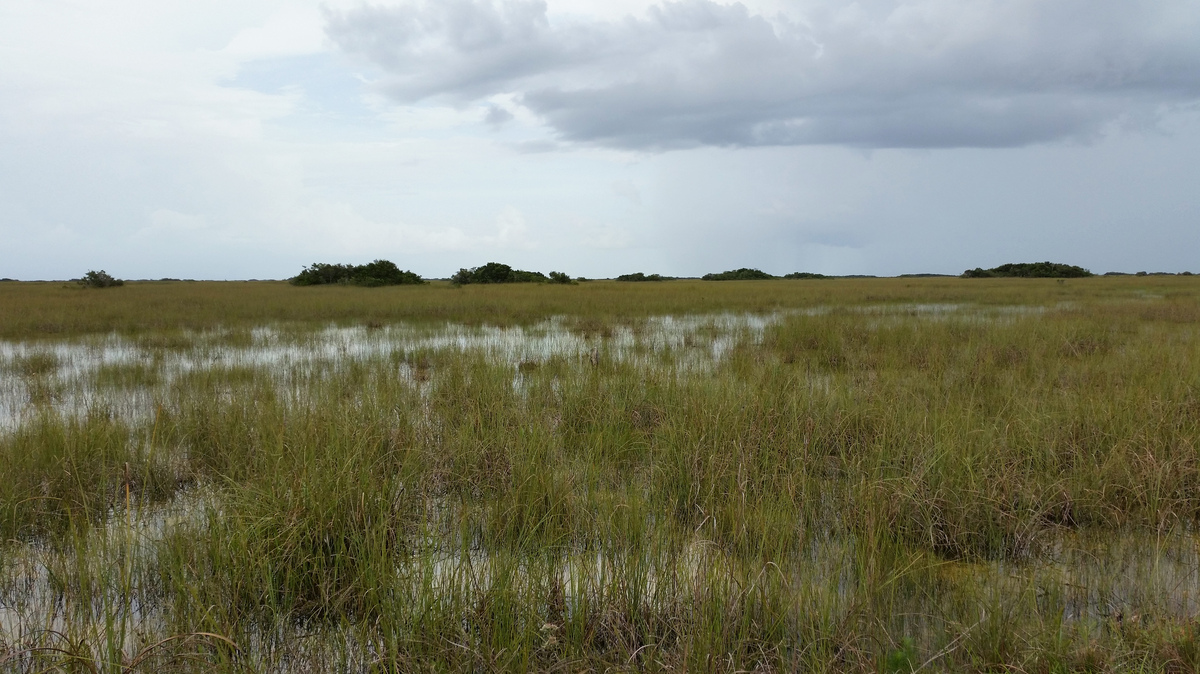 A view from the Shark Valley Visitors Center in Everglades National Park. Much of the freshwater that used to replenish South Florida's saw grass prairie has been diverted to agriculture, researchers say.

The Florida Everglades is a swampy wilderness the size of Delaware. In some places along the road in southern Florida, it looks like tall saw grass to the horizon, a prairie punctuated with a few twisted cypress trees. The sky is the palest blue.

But beneath the surface a different story is unfolding. Because of climate change and sea level rise, the ocean is starting to seep into the swampland. If the invasion grows worse, it could drastically change the Everglades, and a way of life for millions of residents in South Florida.

An experiment is going on here to help scientists understand more about what's likely to happen as the ocean invades. "We're making, basically, artificial seawater here," a guy wearing a mosquito net over his face tells me, as he stirs water in a vat the size of a hot tub.

The guy in the mosquito net is Joe Stachelek — a collaborator with Tiffany Troxler, from Florida International University. They're making salt water and pumping it out into the wetland — dosing the plants and soil with their briny mix as a preview of what the ocean could do.

"As sea level rises," Troxler explains, "the saltwater wedge moves inland." And it infiltrates the bedrock.

"Our underlying rock is limestone," Troxler says. "That limestone is very porous; it's almost like Swiss cheese in some areas."

We walk out into the test site — through the saw grass and the underlying peat, which is a fancy name for muck. It's rich stuff, full of nutrients and microorganisms that feed this river of grass. And, like the plants, the peat also is affected by salt water.

The team has laid out a metal boardwalk, so you can walk around the muck without sinking up to your waist. Out here the grass is patchier, and in some places the peat is slumping — collapsing.

Troxler says there's lots of this slumping going on. "When we start to lose the structure of the plants," she explains, "essentially this peat, which is otherwise held together by roots, becomes a soupy pond."

In response to the salt, the plants actually pull up some of their roots — out of the peat. The roots look like teeth protruding from receding gums.

This could be the future of the Everglades, Troxler says. And here's the thing: The Everglades acts like sponge, feeding off the Biscayne aquifer — a giant cell of freshwater that lies underneath the land.

"We get over 90 percent of our freshwater from the Biscayne aquifer," Troxler says, "we" meaning millions of people in South Florida.

As seawater seeps up from underneath, through the limestone bedrock, it is contaminating the aquifer and the Everglades above it.

That's starting to worry some people. Like Julie Hill-Gabriel, who directs Everglades policy for the National Audubon Society in Florida. She says she tells people in South Florida, "What we do in the Everglades is 100 percent going to affect you in your neighborhood — [and whether] when you turn on the tap water, you have enough fresh clean water."

For millennia, fresh water flowed south to the Everglades, making it the largest flooded grassland in America. But over the past several decades, that water was diverted to irrigate agricultural fields, and to keep homes from flooding. Environmental groups like Audubon have been trying to restore the natural flow to the Everglades, mostly to preserve wildlife.

Now, Hill-Gabriel says, there's a new reason for that restoration — to repel the invading sea. Putting more freshwater back into the sponge that is the Everglades could create a kind of "back pressure" to keep seawater out.

"It just really compounds the urgency to move that freshwater south," says Hill-Gabriel.

At least that's the theory.

When it comes to climate change in South Florida, much of the focus until now has been about protecting property with pumps and barriers. But James Cason, the Republican mayor of the city of Coral Gables, says he hopes his constituents can understand the importance of protecting the Everglades as well.

"It's not just so they can see the alligators," Cason says. "It's because they'll want to make sure the drinking water on which we all depend is not contaminated."