Accessibility links
Book Review: 'The City Of Mirrors,' By Justin Cronin Justin Cronin's blood-and-thunder tale of a viral vampire apocalypse began in 2010 with The Passage. He brings it to a rousing conclusion in his new book, hitting all the beats fans have waited for. 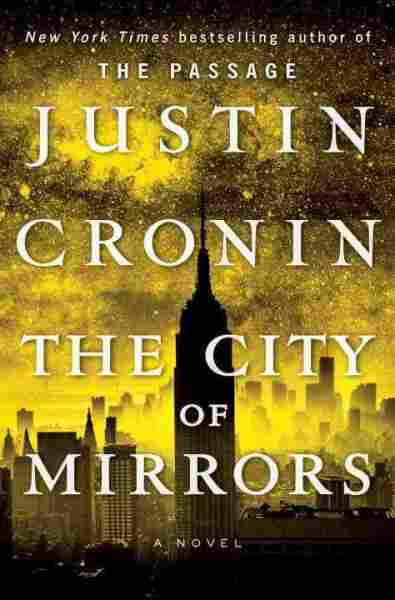 The City of Mirrors

When Justin Cronin pitched his Passage trilogy — which began with The Passage in 2010, continued with The Twelve in 2012 and is now finishing with The City Of Mirrors — it must have been one of the easiest buys in the history of publishing. It's a post-apocalyptic sci-fi western with vampires is all he would've had to say. And then waited for the publishers to line up and throw money at him.

But then there are the things he probably didn't tell them. The things that make this trilogy different. Special. So much more than that simple nerd-bait elevator pitch ever revealed.

Things like how, by the time it was done, the series would stretch to something like 1,500 pages. Cover nearly 1,000 years of history. Involve dozens and dozens of interlinked characters who find each other, marry, age, have children, live and die and go crazy and become president. That it would utilize the scary, blood-hungry kind of vampires (or "virals," to use his terminology) who don't sparkle or write any poetry, and it would be told in the form of letters, newspaper clippings, maps, extracts of future-y commission reports, dreams, telepathic communication, massive flashbacks and just good, old-fashioned boot-in-the-teeth storytelling.

Okay, so he probably told them that last part. Because Justin Cronin? He is a storyteller. He is a storyteller on an epic George-R-R-Martin-plus-machine-guns-and-vampires scale whose second-best skill must be the construction of spreadsheets just to keep track of who is where, when and why, who they love, who they hate, and what they've got in their pockets.

'The Passage' Teems With Viral Vampires

But look. I know how this all works. If you read The Passage and The Twelve, odds are you've been waiting on this one for some time now. You're going to pick it up no matter what, so the only thing that matters here is to say that, yes, it holds up. Yes, it ties up a lot of the loose ends (but, notably, not all of them). Yes, it is just as beautiful, brutal and obsessively detailed as parts one and two and (bonus) comes out of the gate with an extra-special dose of confidence that you only get when you're a writer coming into the home stretch knowing exactly where you're going and how to get there.

But for the rest of you, let's go through this the long way. If book one was all about world-building and scene-setting, and book two culminated in a massive battle that wiped the remainder of the original Twelve big bad virals from the earth, then you might ask, "But Cronin, what do you have in mind for Act III?"

In classic pulp fashion style, he has an even bigger bad waiting in the wings. As City Of Mirrors opens, we find ourselves in a time of peace. It's been years since the events of The Twelve, there hasn't been a viral seen in all that time, and the town of Kerrville, Texas (which is now a kind of Last Outpost of humanity) has grown so big that it is bursting.

This is the western part of Cronin's tale, full of horses and buckboards, prostitutes, whiskey and settlers pushing bravely out from the close boundaries of civilization. Just about every character readers of the past books have come to know (including Amy, Alicia and her horse, Soldier) has an appearance here. All of them are broken in one way or another. They've all done and seen terrible things, and none of them came out of the first two books unscathed.

But then comes news that the survivors in Kerrville are (maybe) all that remains of humanity. Cue the new big bad, Zero, who has spent the previous two books hiding out in Grand Central Station, and now wants to finish things once and for all.

Obviously, I'm not going to spoil any more of this for you. But I do have two last things to say. For those of you who've read the previous books, this really is the big event you've been waiting for: A full-scale war of virals on virals and virals on humans, a true last stand that builds and comes with a bloody, roaring payoff you won't see coming, then builds again to the big face off you've been waiting for.

And for those of you that haven't, The City Of Mirrors works as a standalone novel, sure. You can read it in isolation, enjoying it simply for what it is. But my guess is that, like me, 20 pages in, you're going to start wondering where these people came from. How Amy became Amy and what the Texas Expeditionary Force did in those years that have become like legends now to humanity's next last generation. Like me, you're going to feel a great and thrilling sense of dark joy knowing that summer is coming and there are a thousand pages of backstory just waiting for you out there that make this final end to Cronin's awesome experiment in epic horror all the more sweet.