Accessibility links
Even With Bundy Behind Bars, 'Range War' Lives On For Some Ranchers Cliven Bundy and many of his militia followers are now in jail, but some Western ranchers vow to continue defying the federal government when it comes to cattle grazing on public lands. 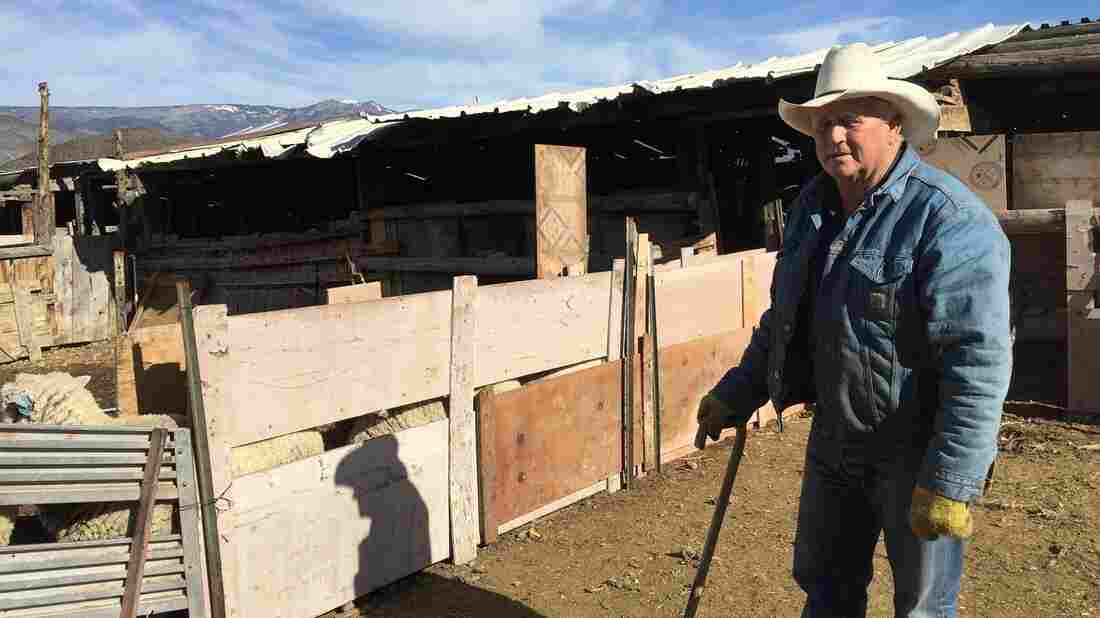 Stanton Gleave considers himself to be a dying breed in the rural West, where cattle and sheep ranching was once a primary focus of federal rangelands. Kirk Siegler/NPR hide caption 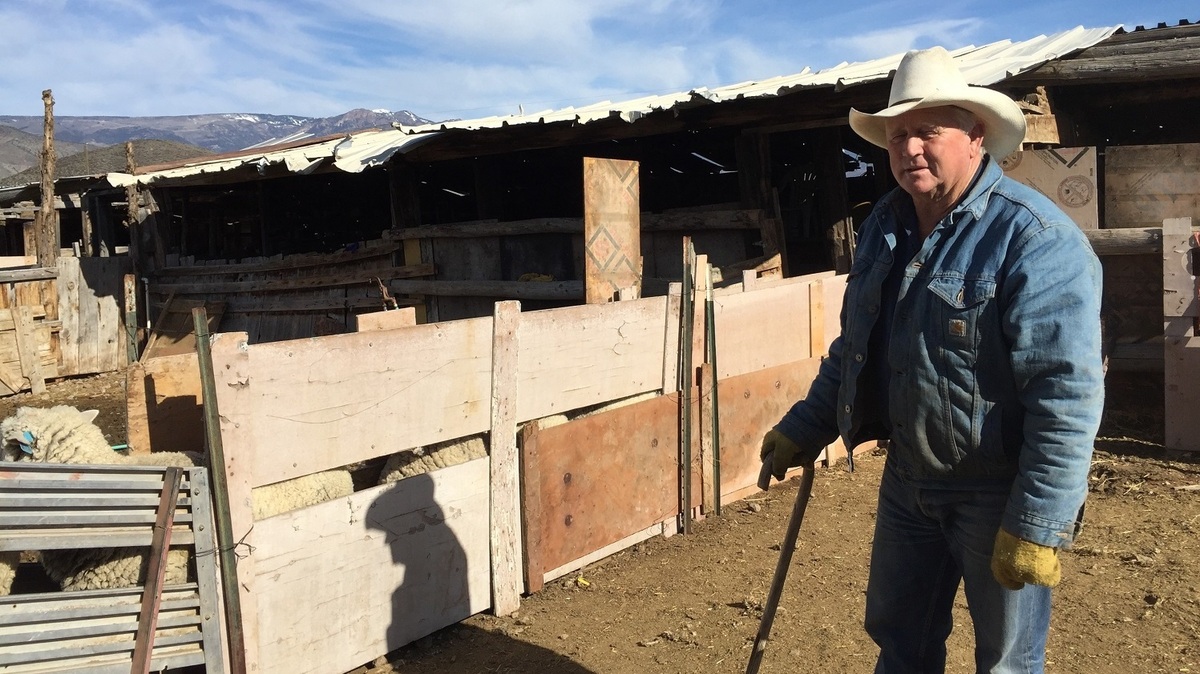 Stanton Gleave considers himself to be a dying breed in the rural West, where cattle and sheep ranching was once a primary focus of federal rangelands.

Standing in a collection of muddy pens taking a break from shearing sheep near his home in tiny Kingston, Utah, Gleave gives an earful about his frustrations with the Bureau of Land Management and environmental groups.

"That's who we're actually fighting with," says Gleave. "They've indoctrinated and got into this BLM and Forest Service 'til a lot of 'em are right up in the head positions now."

Gleave has spent his whole life raising sheep and cattle. His hands are swollen from years of ranch work. He leans on a wooden cane, which he also uses to prod the lambs up a ramp into a shearing shed.

Gleave wants to talk about where these sheep spend most of their days, grazing on the slopes of Mount Dutton.

In recent years, federal grazing allotments have been reduced on federal public land there, and Gleave says it has been hitting his pocketbook.

"That's what this thing's about, range rights," he says. "Since the 1800s our families have run livestock here."

Gleave is like your typical Western rancher in one important way: He doesn't own much land himself. There's no room to run livestock in this sliver of a valley. So he leases huge tracts of federal land that surround his place — namely Mount Dutton. 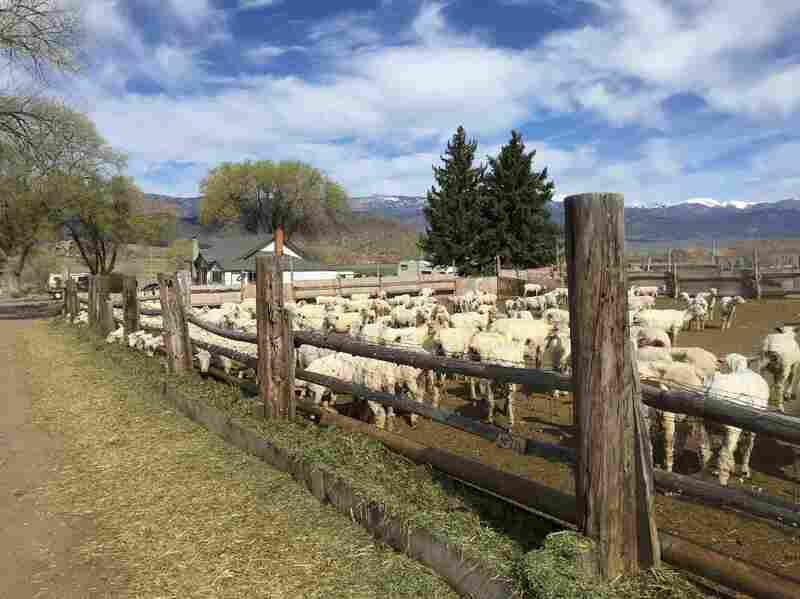 Many Western ranchers don't own much land themselves and rely on vast tracts of federal land for grazing. Kirk Siegler/NPR hide caption 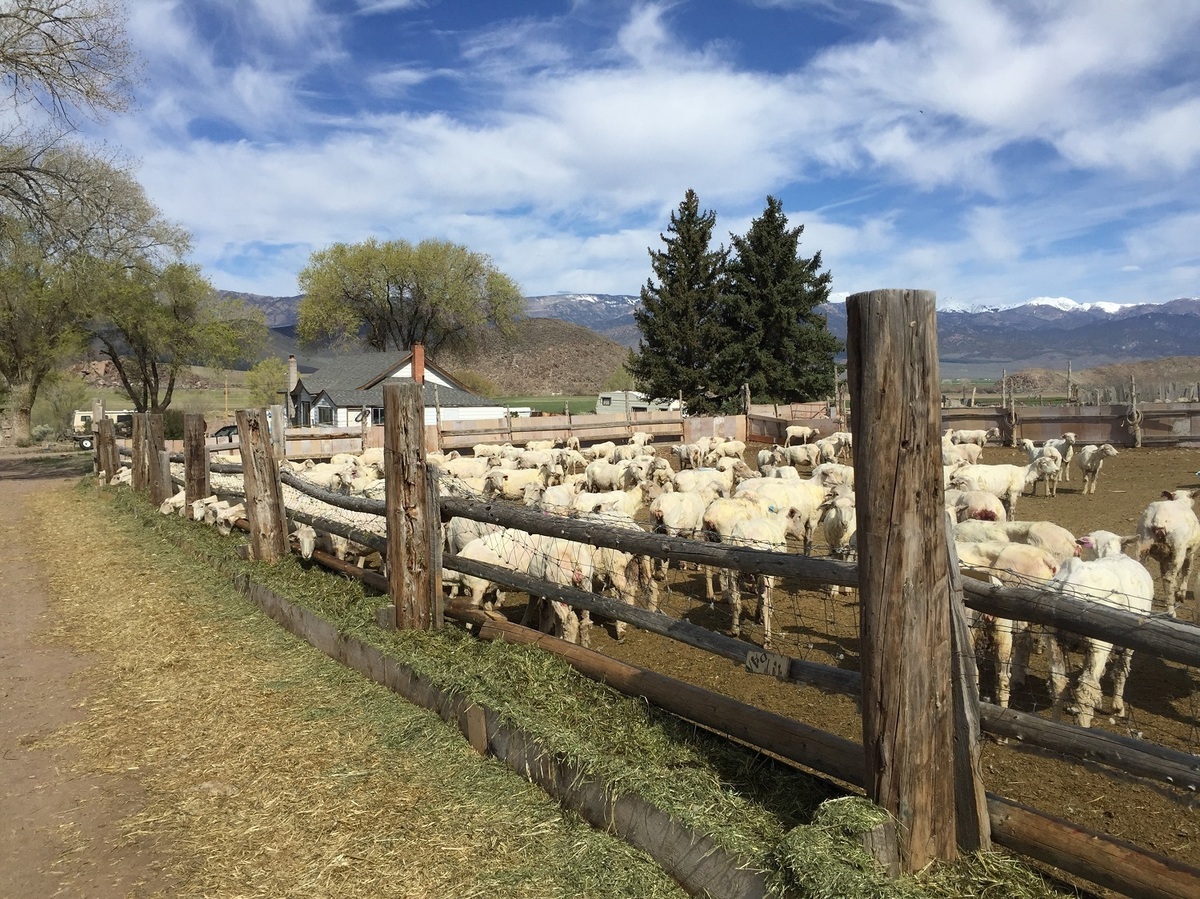 Many Western ranchers don't own much land themselves and rely on vast tracts of federal land for grazing.

This was an arrangement that for the most part worked out pretty well for generations of ranching families like his. The federal government was there to help, maintaining and building roads so ranchers could access their stock. It helped with irrigation projects, building fences.

"Look at this little valley right here," Gleave says, gesturing toward a highway and a smattering of small homes and pastures behind him. "When I was a kid, there was, let's see, one, two, three, four gas stations in it, and three cafes, a furniture store, a car dealership."

That was before the timber mills closed, and most of the mines too. Then President Clinton designated the massive Grand Staircase-Escalante National Monument. And that forced the BLM to focus a lot more on the environment and recreation, not just cows.

"If you read the Constitution, that's the last thing our Founding Fathers wanted was for a federal government to be out here in our business," Gleave says. "They're supposed to be out there in Washington protecting that border down there."

It's true the amount of public land available for grazing has been cut a lot since the 1980s, even more since Gleave was a kid in the 1950s.

"What would you do if you was losing everything you got, would you stand and fight or would you roll over and play dead?" he asks.

This is the kind of talk that's typical of a small, tight-knit group of ranchers mainly clustered in the remote Southwest. Most are conservative and refer to themselves as devout Mormons. They believe the Constitution doesn't allow for the federal government to control Western land.

The government hoped the movement's self-described "range war" would peter out after the arrests of rancher Cliven Bundy and his sons for their role in recent armed standoffs in Bunkerville, Nev., in 2014 and at the Malheur National Wildlife Refuge in eastern Oregon earlier this year.

It hasn't. The Bundys are facing a litany of federal felony charges that include conspiracy and assault on a federal office.

There is also renewed concern among federal officials that the shooting death of one of the Oregon militants, LaVoy Finicum, could fuel more potentially violent standoffs down the road.

Finicum's widow, Jeanette, has likened it to an "assassination" and is planning to sue, even as she could face jail time herself.

"He stood for freedom," she says.

Jeanette Finicum is now alone at the couple's ranch near Colorado City, Ariz.; about a three-hour drive south from her friend Stanton Gleave's place.

She wears a black shirt with the couple's cattle brand printed on it, LV, for LaVoy. Inside the family's modest brick ranch house, his cowboy hats are still hanging on the stair rail, his chaps by their bed, where he left them before he drove to Oregon. 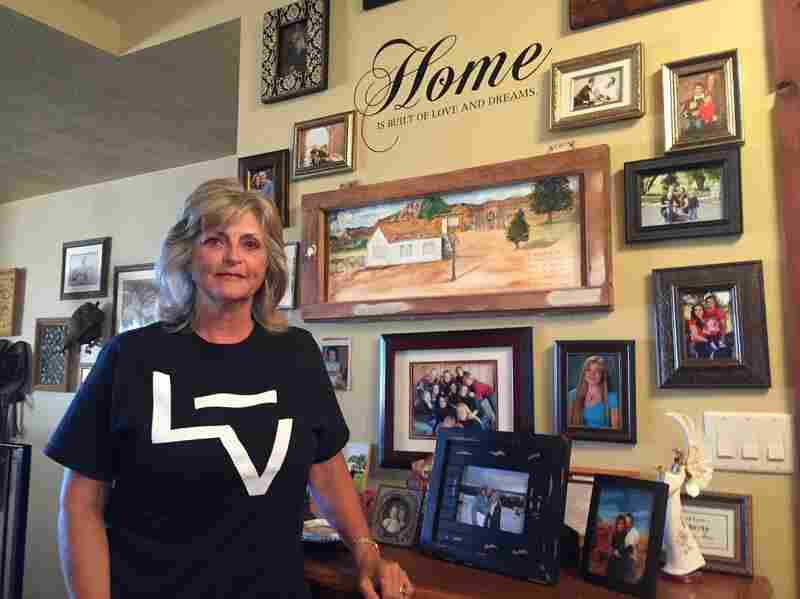 Jeanette's husband, Robert "LaVoy" Finicum, was killed as federal authorities arrested militants at the Malheur Wildlife Refuge earlier this year. She says she knows the choice of whether her family stays in the cattle business may not be hers to make. Kirk Siegler/NPR hide caption 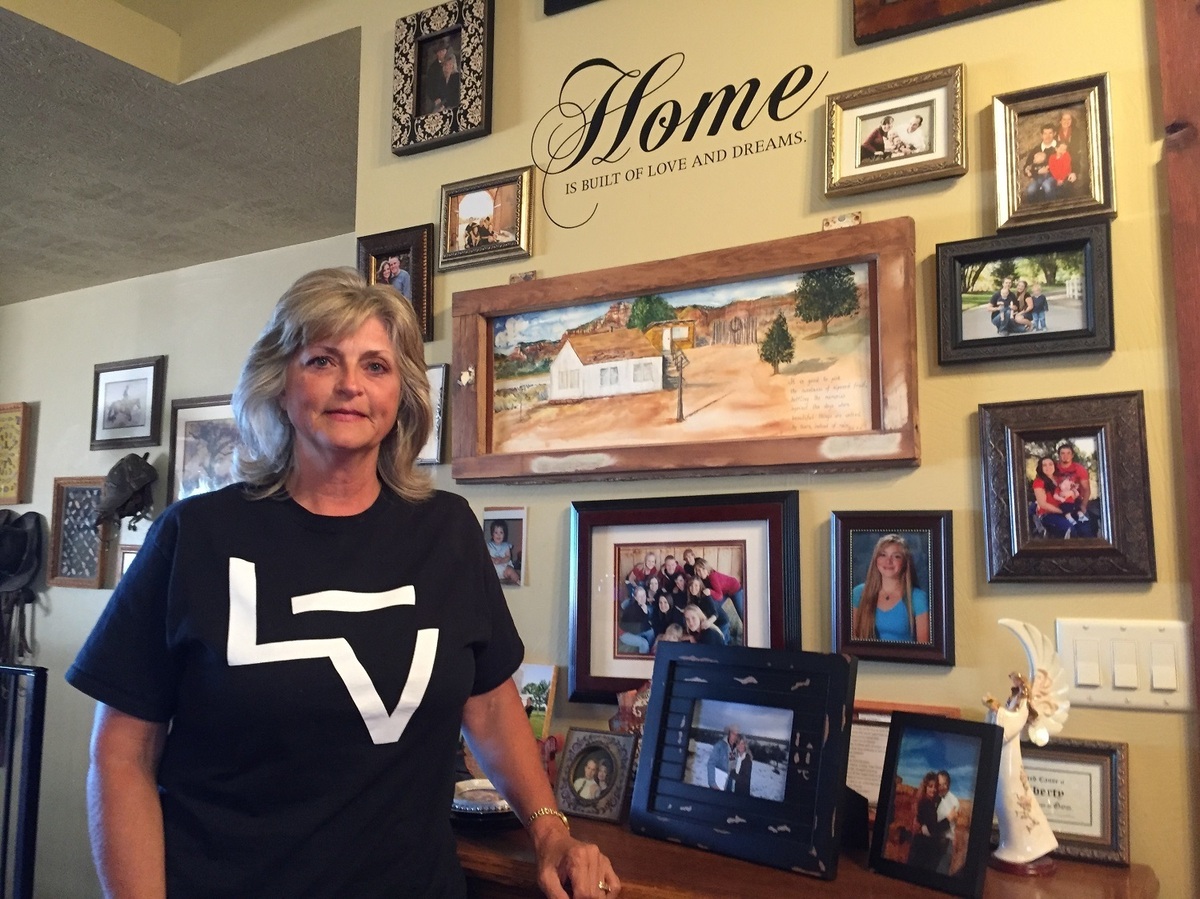 Jeanette's husband, Robert "LaVoy" Finicum, was killed as federal authorities arrested militants at the Malheur Wildlife Refuge earlier this year. She says she knows the choice of whether her family stays in the cattle business may not be hers to make.

Finicum has been thrust to the forefront of the anti-federal-lands movement and there's pressure on her to keep taking a stand against the government and continue defying federal grazing rules, as her husband had.

"They may have killed LaVoy's voice," she says, choking back tears, "but they created 12 more voices in our 11 children and myself, and we're going to continue with his message going forward."

But she hasn't decided what she'll do yet with the cows, whether to keep defying federal orders, or sell them and get out of the business altogether.

"I've already been told by many different people who've spoken with other officials that I'd better watch myself," she says.

In the meantime, her family is starting its spring branding and the cows continue to graze illegally on federal land near here.

Federal authorities are not saying whether they'll make more arrests. Yet Finicum knows the choice of whether she stays in ranching may not be hers to make.

"I stand to end up just like everyone else, arrested, property taken," she says.