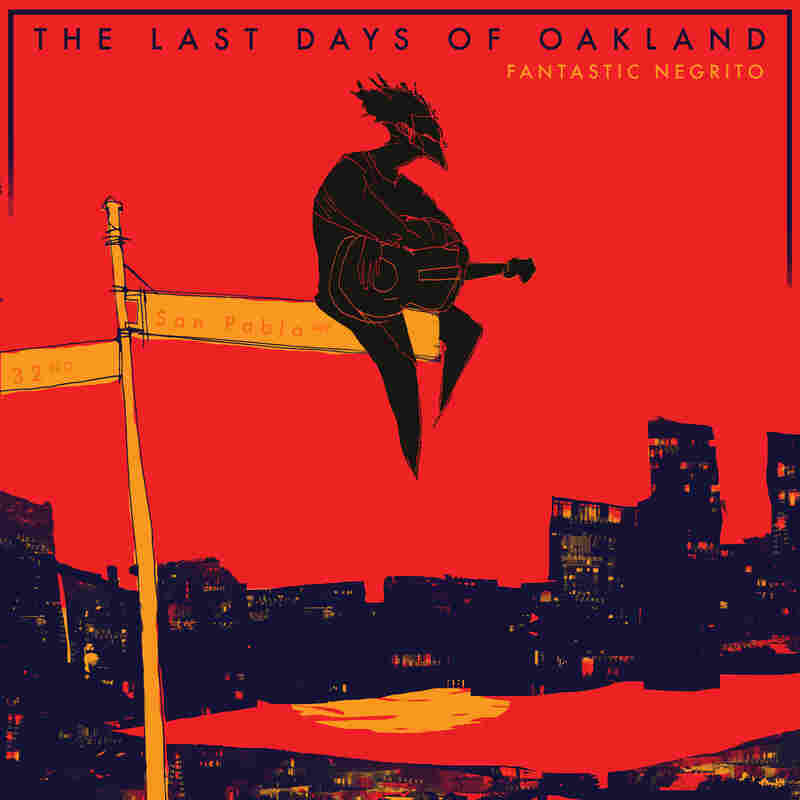 Fantastic Negrito, The Last Days Of Oakland Courtesy of the artist hide caption

"Blues with a punk attitude" is the tagline on Fantastic Negrito's website, and it's not an empty slogan. The Bay Area singer-songwriter, a.k.a. Xavier Dphrepaulezz, infuses Last Days Of Oakland with slide guitar drenched in overdrive, not to mention a hard-bitten perspective on life, love, art, commerce, class and society. It's an outlook he's earned. Before winning NPR's Tiny Desk Contest in 2015, he'd spent years in painful physical therapy, struggling to regain the use of his body following a car accident in 2000 that left him in a coma for weeks. Appropriately, Last Days Of Oakland is among the rawest pieces of music — sonically and emotionally — you'll hear all year. But it's also the work of a craftsman, full of subtlety and sophistication, along with the kind of scars that only a survivor can flaunt.

Dphrepaulezz spent his early childhood in Massachusetts, the son of a Somali-Caribbean immigrant, before his family relocated to Oakland when he was 12. By the time his teens were over, he'd taught himself to play numerous instruments, eventually leading to what seemed like the jackpot: a major-label contract. The result was X-Factor, an album Dphrepaulezz released in 1995 under the mononym Xavier. Polished, socially conscious and steeped in the classic soul of Sly Stone and Shuggie Otis, the album didn't find much traction in the post-grunge '90s. Dphrepaulezz has called the Xavier experience "creative death" — and, after coming close to actual death a few years later, it appeared as though his music career had given up the ghost.

Last Days Of Oakland is stunning proof otherwise. The birth of his son a few years ago reignited Dphrepaulezz's musical passion, and that passion drips from every hook, riff, beat, clap, croon and howl on the album. "Lost In A Crowd" — the song that beat out 7,000 other Tiny Desk entrants, and one he performed last year as part of his Tiny Desk concert — provides the record's emotional core, a stomping hymn of gospel intensity. "Lost in the wilderness of sound / Get through the day, don't drown," Dphrepaulezz sings. "Feelings of rage and broken bones," he adds later, drawing from his own deep well of frustration and struggle. Relief comes in the form of delicate, tenderly melodic interludes: "We're just people, lonely people, you and I." The dynamic is wrenching in the best possible way. "Working Poor" sticks to a steadier tone, as it mixes fuzzed-out blues with rich organ chords and a snarled commandment: "Don't sell your life."

As intense as Last Days Of Oakland is, it's filled with small moments of quietude, lushness and grace. Dphrepaulezz's band is impeccably tasteful, even when it's tearing out raw chunks of Zeppelin-esque rhythm in "Hump Thru The Winter." In the ballad "About A Bird," smoky jazziness mingles with spiritual fervor, while "Rant Rushmore" offers bittersweet reflection and regret, not to mention a chorus of amens, to counterbalance its profanity-laced tirade. Last Days Of Oakland is a powerful document — if not a full-on rallying cry — about bulldozing all the roadblocks life piles up through sheer force of will, talent and song. It's an angry album. It's a righteous album. It's a redemptive album. Ultimately, though, it's a celebration of hard-fought survival, something Dphrepaulezz knows all too well.