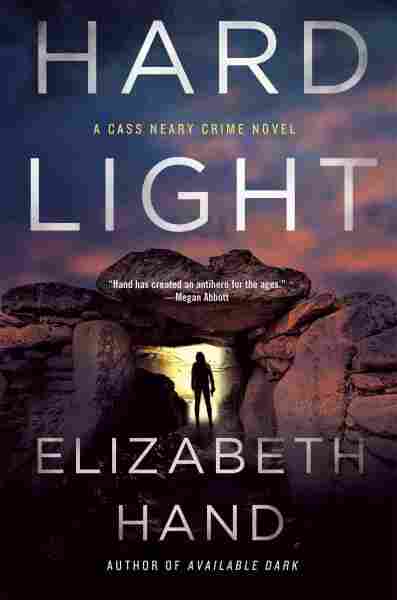 "Too Tough to Die." Those words are tattooed on Cass Neary, the antihero of Elizabeth Hand's crime-novel series that began with Generation Loss and continued with Available Dark and the new Hard Light. Where those words are inked — and why Cass chose to put them there — is one of the many jagged, tragic details that make the series so compelling: In the early '80s, at the age of 23, Cass was stabbed and raped. Her tattoo covers the scar she incurred that night — and in a perverse way, it also proudly tags it. (Not that she dwells on it.)

Now a washed-up punk rocker in her late forties living in a rent-controlled apartment in New York City, "Scary Neary" spends more time struggling to survive on her bookstore-clerk wages while battling various addictions: Meth, speed, booze, prescription drugs, you name it — but not battling too hard. Cass has other skeletons rattling around in her closet. During a brief time in the '70s, when punk was all the rage in New York, she was a semi-famous photographer. Her book of morbidly elegant photos, Dead Girls, opened the door to a career, but she squandered that opportunity in what became a pattern of self-destructive behavior.

Now she's a cult figure to a handful of photo aficionados around the world — those whose tastes run toward the transgressive — which doesn't help her much as she scrabbles for the occasional freelance assignment. It all changes one day when she's offered a journalism gig in the wilds of Maine: interviewing a reclusive, legendary photographer who lives in a small town where people have begun to mysteriously disappear.

'Generation Loss,' 'Available Dark,' and 'Hard Light' form a single, breathless, absorbing story — and if the stark ending of the latest volume is any indication, it's far from over.

That mystery forms the plot of Generation Loss. Published in 2007, it was a gear-shift for Hand. Previously she'd written horror, fantasy, and science fiction, often packaged in complex narratives and lush prose. Her turn to crime fiction brought with it a new style: Sharp, clear, and mercilessly lean. Not only did that style fit Cass, it fit Hand: The author, roughly the same age as her character, was also a part of the punk scene in her youth. Generation Loss rasps with gritty authenticity, from the copious references to artists like Iggy Pop and the Ramones to the way Cass' hardcore attraction to damage and destruction propels her deep into the book's maze of murder and secrets.

Weirdness abounds in Generation Loss — in one memorable scene, the teenage Cass looks up in the sky to see an enormous eye peering down at here, a symptom of mental imbalance or something more cosmically horrifying — although it never quite tips over into the supernatural.

In fact, with Available Dark, the weirdness is toned down slightly in favor of a brisker, more streamlined crime tale. Fired from her bookstore job and deep in drugs once more, Cass receives an old photo of her high-school lover Quinn, from whom she's been estranged for decades. This leads her to Finland and then Iceland in search of him — and the Scandinavian setting feels, in part, like a nod to Stieg Larsson's Lisbeth Salander, a character with many similarities to Cass who took the literary world by storm a year after Generation Loss was published. But Cass is, as always, the embattled underdog, and her nervy, gripping first-person voice carries Available Dark through the murky underworld of Scandinavian black metal, a place far more perilous than Cass' tame-by-comparison punk scene.

'Sandman Slim' Is Urban Fantasy With Brains, Guts And A Blackened Heart

Hard Light is the latest, longest, and most involved book of the series, a sprawl that encompasses black-market antiquities dealing, ancient English ruins, cult cinema, rave culture, and the '70s rock-groupie scene. And Hand makes it all work. This time around, Cass has flown to London on a stolen passport in order to meet Quinn; a gruesome event at the end of Available Dark has cast shadows on their recent reunion, but Cass is nonetheless driven to see their unhealthy relationship through. She doesn't get the chance, as she stumbles across bodies, falls prey to her own addictions, and gets swept up in an insidious family secret.

As with the first two books in the series, Hard Light is rife with Cass' ruminations about photographic techniques and aesthetics — at some points it reads a bit drily, like a primer on photography, although the ending is a brilliant use of the camera as both a plot device and a metaphor.

Like many crime series, the Cass Neary books are formulaic in spots — but they follow their own formula, a cyclical rhythm that feels a whirlpool starting to circle. Each book ends with a showdown in some desolate, dramatic, deadly terrain, and Cass collects fresh scars like clockwork. She's guaranteed to find the wrong corpse at the wrong time, and on every other page she's washing down Adderall with Jack Daniel's. The consequences of her dark, dangerous lifestyle hit her hard, though, as they accumulate and clutch at her soul. With barely a gap in chronology between each of them, Generation Loss, Available Dark, and Hard Light form a single, breathless, absorbing story — and if the stark ending of the latest volume is any indication, it's far from over.

Or as Cass herself puts it at the start of Hard Light: "I'm the ghost of punk, haunting the twenty-first century in disintegrating black-and-white." Too tough to die, indeed.

Read an excerpt of Hard Light