Accessibility links
Donald Trump-Hillary Clinton Gender Gap Could Be The Largest In More Than 60 Years If recent skirmishes between the two candidates are any signal, gender will factor heavily into their attacks — and that could potentially widen the gap even more. 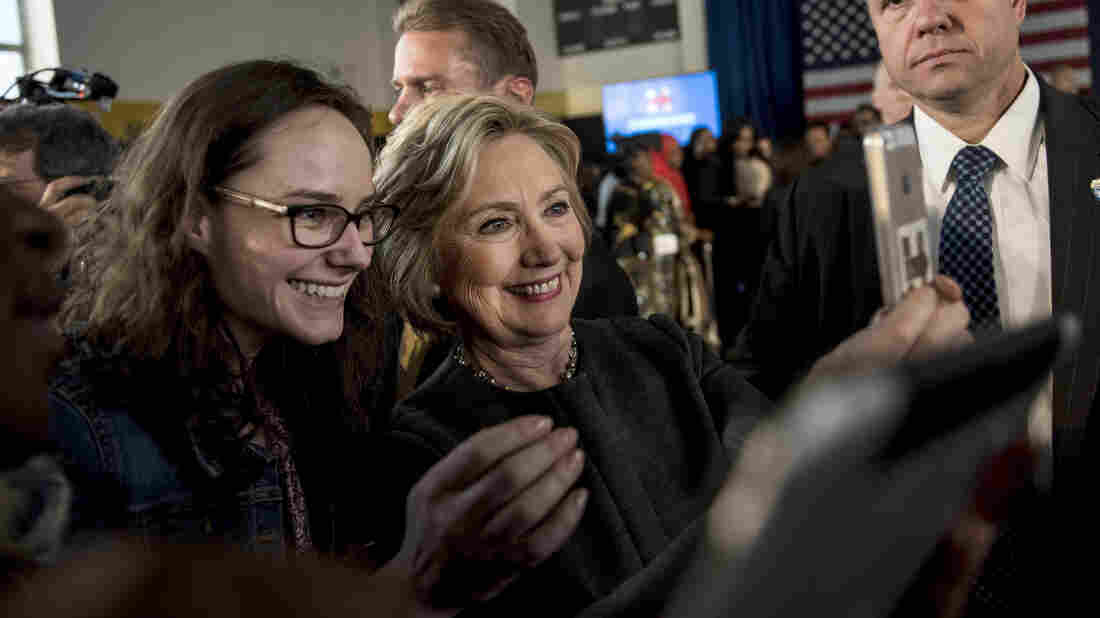 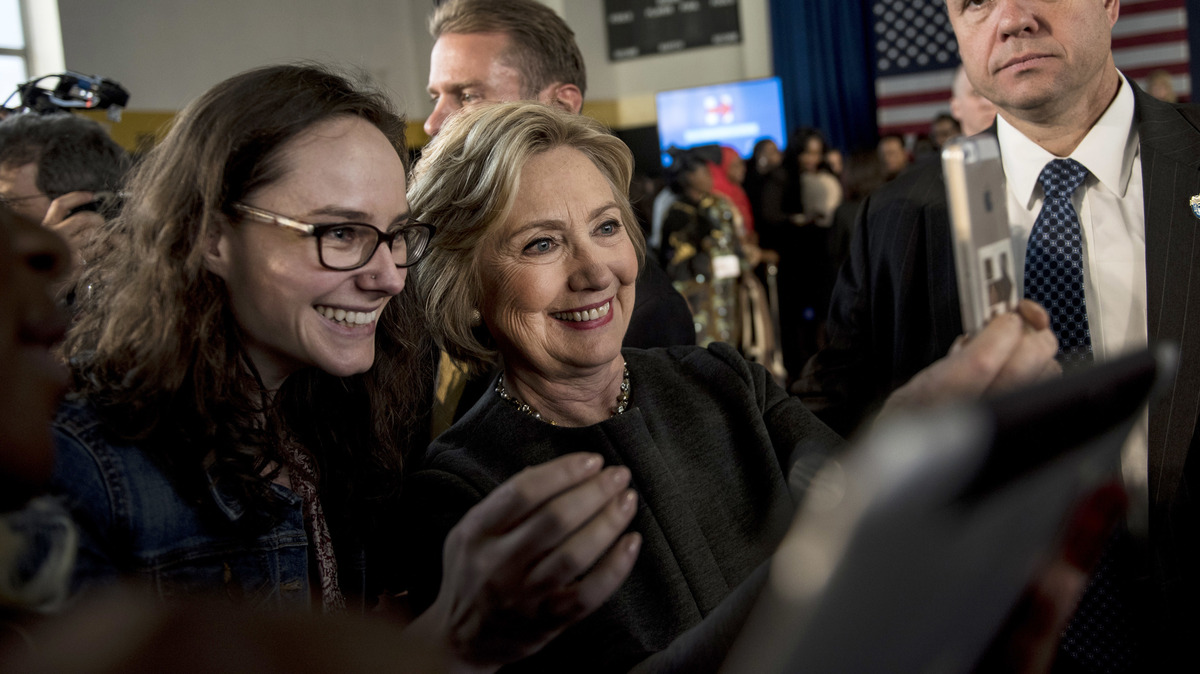 Hillary Clinton stops for a selfie with a supporter following a Women for Hillary Town Hall meeting in New York City.

During a recent speech before the National Rifle Association, Donald Trump was explicit about the voters he's reaching out to: "I will say, my poll numbers with men are through the roof, but I like women more than men. Come on, women. Let's go. Come on."

He has every reason to fight for the women's vote. It's a safe bet in any given presidential election these days that women will vote more Democratic than men. This year, given Trump's abysmal poll numbers among women, it looks like an even surer bet than usual.

The latest round of polls suggests that in the 2016 election, those two dots could be farther apart than in any modern election yet. We chose one as an example — women chose likely nominee Hillary Clinton 51 to 38 percent in the latest NBC News/Wall Street Journal matchup between her and Trump, while men supported Trump 49 to 40.

It's just one (early, registered-voter) poll — meaning the numbers could still be very far off from where they will be in November — but it suggests the gender gap could be bigger this year than in any election since 1952, and perhaps even earlier.

Here's how those gaps — that is, the distance between those dots — have looked over time, as well as how they might look, according to that survey, in a Clinton-Trump matchup.

It's one measure of just how wide the gender voting gulf is getting. In this latest NBC/WSJ poll (as well as a recent CBS-New York Times poll), the gender gap is on par with where it was in 2000, when Democrat Al Gore overwhelmingly won women, while George W. Bush won the men's vote by an 11-point margin.

That CBS-New York Times poll also found a large gender gap in a hypothetical matchup between Bernie Sanders and Trump. Women favored Sanders by 24 points, but Sanders performed better among men by only 1 point — that is, within the margin of error. Likewise, women preferred Clinton over Trump by 17 points, while men preferred Trump slightly, by 5 points.

There are other ways to measure the gender gap: for example, you can simply measure the difference between women and men on one party's candidate — that is, the fact that around 55 percent of women voted for Obama in 2012, compared to 45 percent of men (so, a 10-point gap). By that measure, 2012, 2000 and 1996 were all relatively wide-gap years, at 10 or 11 percentage points.

On that measure again, this year's election could easily have a bigger gap. This latest poll also shows an 11-point gender gap between both Trump and Clinton.

Once again, today's polls are inherently uncertain for a lot of reasons. After all, there are more than five months of campaigning left.

If recent skirmishes between Clinton and Trump are any signal, gender will factor heavily into the candidates' attacks. Depending on how women and men respectively react to those attacks, the gender gap could widen significantly by November. (Interestingly, it also may not have much to do with Clinton's gender — several studies have shown that gender doesn't play into people's votes nearly as much as party.)

Indeed, those poll results imply that more than 10 percent of men and women alike didn't choose Trump or Clinton, meaning some may have yet to make up their minds. Once they do, it could widen the gulf even more.

It's true that Republicans have managed to win the presidency despite deficiencies among female voters — George W. Bush did it in 2000, for example (though he didn't win the popular vote), and then again in 2004, when he lost the women's vote by less.

But this loss of women voters — and a potential decrease with white women in particular — signals some big weaknesses for Trump. The 2012 election is a great point of comparison here. Though Mitt Romney lost women altogether by 11 points in 2012, he won white women, 56 to 42. In that NBC/WSJ poll, Trump currently leads among white women by only 4 points, 46 to 42. True, that leaves 12 percent of those women who haven't chosen one or the other yet. But Trump would have to win the overwhelming majority of those women in order to beat Clinton among them (unless he wins white men by margins never seen before).

Perhaps realizing he has a big deficit among women, Trump has started attacking former President Bill Clinton's history with women. A recent video Trump released on Instagram includes an audio clip of Juanita Broaddrick, who has accused Clinton of a sexual assault in 1978.