Accessibility links
There's No Wonder Left For 'Alice' Other than brand extension, there seems to be no reason at all for Alice Through The Looking Glass to exist. And it shows in the final product.

There's No Wonder Left For 'Alice'

There's No Wonder Left For 'Alice' 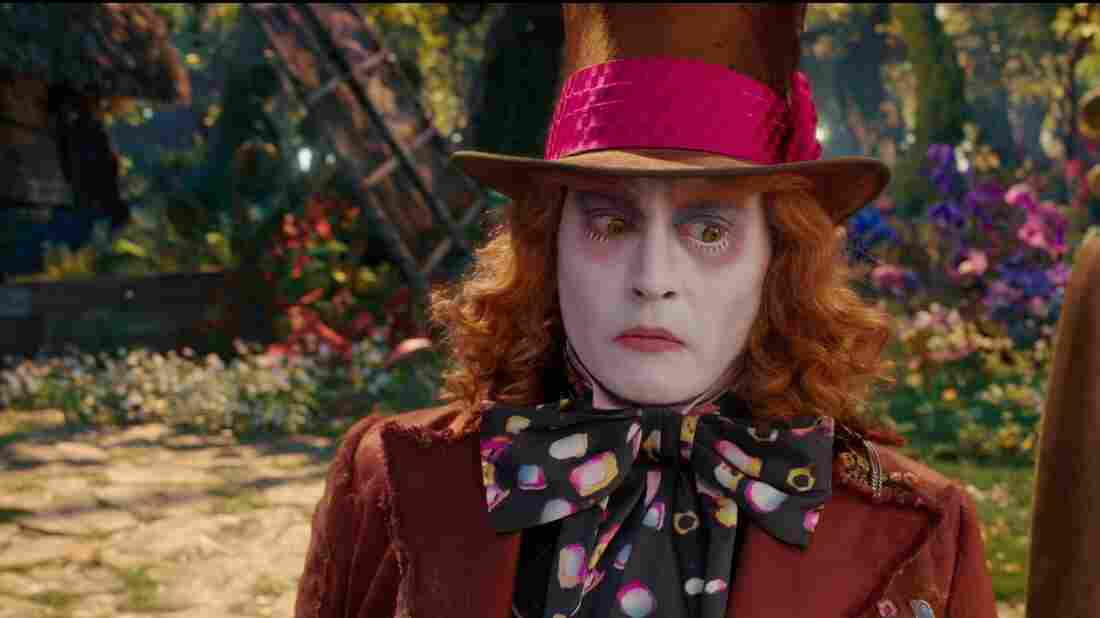 Johnny Depp in Alice Through The Looking Glass.

We're not in Wonderland anymore, if indeed we ever were. Most likely, we'd already left it far behind with the 2010 Tim Burton reshuffling of Alice in Wonderland. That smash hit repurposed elements from both of Lewis Carroll's Alice books, including sequel Through the Looking-Glass, while setting the action around a 20-year-old Alice (brave soldier Mia Wasikowska) returning to the land of her childhood dreams. So with all the famous bits already checked off, and the "rite of return" storyline over and done with, the logical step would have been to retire this new green-screen Alice like the Cheshire Cat, allowing her to vanish from sight, leaving only the grin of her impressive box office receipts.

But oh, not so: Alice Through The Looking Glass is here. It has left behind Burton, who returns as a producer while handing the director's chair off to James Bobin (who rebooted The Muppets with such success). And it has left behind Carroll, as well. Characters may still share names with familiar residents, like Johnny Depp's Mad (in name only) Hatter; Helena Bonham Carter's shrieking, decapitation-obsessed Red Queen/Queen of Hearts mashup; Anne Hathaway's White Queen, gliding her arms about like a New Age priestess; and the cadre of talking animals like the White Rabbit, the March Hare and the unamused blue butterfly Absolem (Alan Rickman, in his final performance). Yet they assuredly do not live in the same place we remember from our dreams.

The Wonderland of Looking Glass no longer operates under the pleasing illogic that's captured children's minds for generations, where, to quote Carroll, "The Hatter's remark seemed to have no sort of meaning in it, and yet it was certainly English." Instead, impossibly, Disney has morphed this setting into yet another dismal fantasy place, with villages and family structures and traditional coronation ceremonies for royalty. The Red Queen has a traumatic childhood memory with an explanation for that gigantic head and temperament. Even the Mad Hatter has an orange-haired family; not only that, but he has a stuck-up, traditionalist hatter father (Rhys Ifans), who frowned upon his son's whimsy as a child. A whimsy-free business, in Wonderland, of all places! There could be no more ironic stand-in for today's franchise-mad movie marketplace, here to lop the heads off any and all creative personnel.

These new, decidedly non-wondrous layers are revealed once Alice, having first escaped the real world through a looking glass so as to technically satisfy the film's title, uses a "chronosphere" (it's sort of a steampunk gyroscope trinket) to jump back in time. The time travel comes after returning screenwriter Linda Woolverton, a Disney veteran, expends a great deal of effort acclimating us to 1874 Britain, where Alice, clad in a peacock-colored dress from China, has become the female-empowerment captain of her father's ship. Then we get another lengthy table-setting to re-introduce the old crew and explain the chronosphere, and why Alice feels compelled to use it. If you're counting, there are at least three distinct scenes wherein Alice steps gingerly across some threshold and into a new land, all shot from above with swooping wide angles that emphasize the hollow digital environments.

Why did this movie need to nestle time travel inside a world of make-believe, like panic rooms (break in case of board-room boredom)? Has Disney so lost its way since its golden era, when it once made a beloved 1951 animated Alice, that it can no longer find enough magic in one fantastical concept per film? Maybe there's not much left to fill 113 minutes' worth of Carroll-lite galumphing once you've carefully stripped away any lingering references to hallucinatory substances. Such studious family-friendly tinkering has resulted in a PG-13 rating, though since children shouldn't be wasting their brains with this anyway, perhaps we should be thanking the Mad Hatter MPAA this time.

Alice Through The Looking Glass isn't the worst bleached-dry, contractually obligated sequel to a fantasy reboot this year — not when The Huntsman: Winter's War is sitting right there (and doing little else). Bobin's film manages some moments of creativity, including an effect that coats all of "Wonderland" in scary rust and Sacha Baron Cohen's strange performance as Time personified. In all his movies, Cohen exists in his own private Wonderland, and here he seems at home ad-libbing dire proclamations. His character, who seems to have been inspired by a brief aside in the original novel, comes with ticking gears in the back of his head and a full clock face in his stomach — but here, the film can only muster up a series of awful puns and a rulebook for time travel that frequently breaks down.

It's enough to drive one mad. But in this new Jabberwock'd land of brand deposits, where Alice and her friends can be suckered into temporary sanity for the good of a movie poster, madness has no meaning anymore.