Accessibility links
'X-Men' Issues: Hiding Oscar Isaac Is Only The Beginning The latest period installment of the mutant franchise gets the gang back together, but the time machine seems to be running out of juice.

'X-Men' Issues: Hiding Oscar Isaac Is Only The Beginning

'X-Men' Issues: Hiding Oscar Isaac Is Only The Beginning 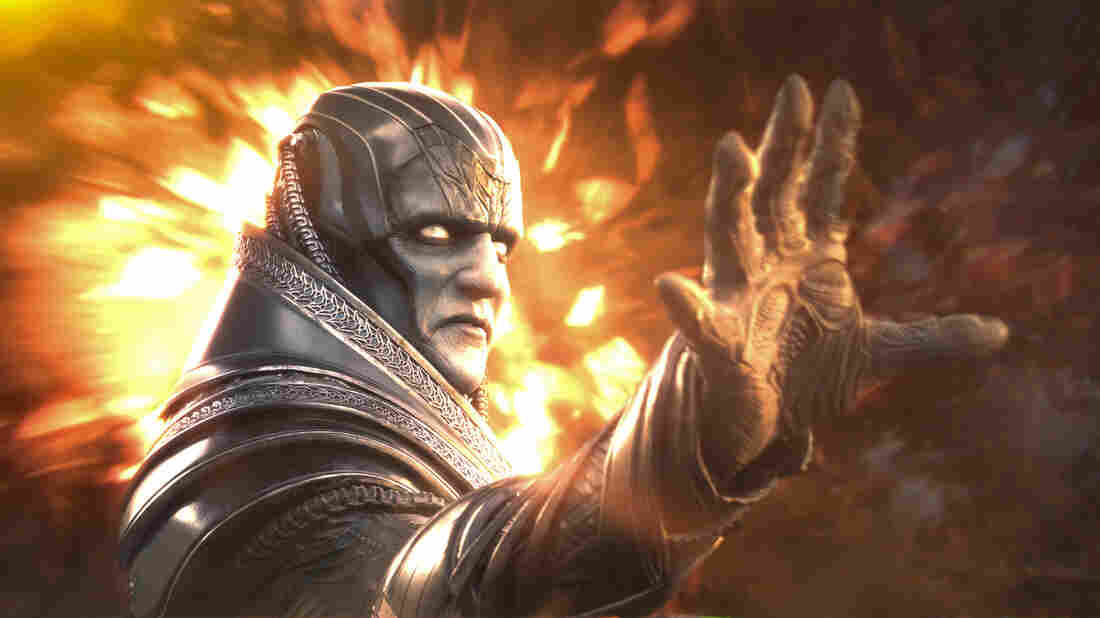 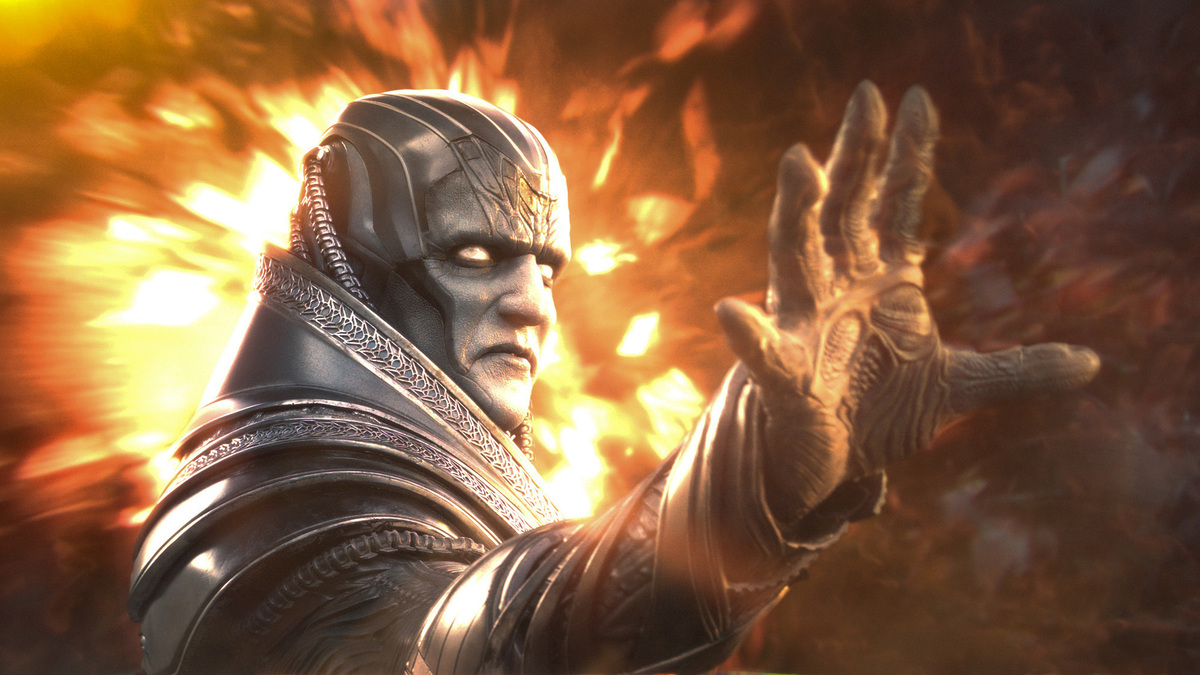 They promise us that's Oscar Isaac under there playing Apocalypse in X-Men: Apocalypse.

X-Men: Apocalypse, the sixth X-movie in 16 years (give or take a couple of Wolverine solo flicks and the breakout spinoff Deadpool) begins and ends with wearying campaigns of computer-animated mayhem. Pyramids, then skyscrapers dissolve. The body count must be high, but the stakes feel low.

Bummer. Because the 85 minutes in between those dreary poles? Amusing enough, and true to the clunky, hyperbolic spirit of The Uncanny X-Men comics circa 1983, when this entry is set. The signposts are obvious (teleporting X-Man Nightcrawler spends most of the movie in Michael Jackson's red leather jacket from the "Thriller" video) and less so (a cameo by WarGames star Ally Sheedy). Here is a movie that gets the details right while getting the big stuff — pacing, emotional investment, dialogue — largely wrong. It's not the first deflating X-Men picture, but it's the first from director Bryan Singer, who now has four of these under his belt, including the original.

I miss the thrifty midnight-movie quality that initial colon-free X-Men had. Its competitors at the Y2K summer box office were Gladiator, The Patriot, What Lies Beneath, The Perfect Storm — the kinds of splashy star vehicles that superhero films have all but displaced. X-Men was cheaper and weirder (and not for nothing, shorter) than its peers. It couldn't afford the kind of digital city-stomping that's become the genre's least appealing trope. Like the first Men in Black (another comic book adaptation), it was an expensive movie that still felt low-rent, in the best possible way. Even Hugh Jackman, the one player who has X-Men to thank for his film career, was a replacement for an actor who dropped out. That's how rickety it was.

In 2011's X-Men: First Class, Marvel's Strangest Super-Heroes of All! (sic) defused the Cuban Missile Crisis while JFK took the credit, and so the X-flicks were reborn as period films. Ironically, pulling these characters back in time was just the trick to make the aging franchise feel fresh. 2014's Days of Future Past restored Singer to the helm for a era-straddling, willfully continuity-scrambling romp that mostly took place in 1973.

Apocalypse suggests the DeLorean may at last run out of plutonium, despite the fizz Singer & Co. wring from its Reagan-era setting. That's when the long-slumbering Egyptian proto-mutant En Sabah Nur (Oscar Isaac, though his giant blue banana costume makes him tough to pick out) awakens, determined to gather a mutant flock to cleanse the planet of homo sapien vermin. "From the ashes of their world, we'll build a better one!" he declares, several times. Heckuva campaign slogan, guy. It's intimated he may have inspired some of the Bible's gnarlier chapters, so he's unburdened by the pursuit of "relatability" that confounds so many leaders now.

Like every X-Men adventure, Apocalypse is superficially about how far its moderate, assimilationist heroes — organized by benign telepath Prof. Charles Xavier (James McAvoy) — are willing to go to stop their more militant brethren from declaring war on their human oppressors. The series' grand subject has always been the politics of alienation v. inclusion, though this installment expresses that idea via the clumsiest of its available tools: Words.

A decade of story-time has passed since the X-Men movie of just two summers ago, and Singer & Co. spend nearly the whole film putting the band back together. Tye Sheridan, Sophie Turner, Alexandra Shipp, and Kodi Smit-McPhee make their debuts as the younger versions of Scott "Cyclops" Summers, Jean "Marvel Girl" Grey, Ororo "Storm" Munroe, and Kurt "Nightcrawler" Wagner. Only McPhee evinces much personality, playing the X-Man who least resembles a person. (Like a lot of characters in this series, Nightcrawler has blue skin. And a tail.) When he meet him, he's being forced to fight the winged mutant Angel for the amusement of his captors in some unholy German circus.

Meanwhile, Michael Fassbender's Erik "Magneto" Lensherr has become a family man, living quietly in Poland under an alias after levitating a stadium on global television in the last movie. We know his idyll must be doomed, but the scene where it all goes south on him is still the film's most affecting one.

Jennifer Lawrence is now much more famous than she was when she signed her multi-picture deal; her screen time as the conflicted shapeshifter Mystique has been beefed up to reflect her increased stature. Mystique has become a folk hero among mutants, and she's the true believer who whips this lineup of greenhorn X-Men into a fighting unit. Because even casual fans know by now that Magneto and Mystique are destined to rebuff Xavier's entreaties and become violent separatists, their ethical struggles here should resonate more than they do.

Will it bother you that Fassbender, McAvoy, Lawrence, Nicholas Hoult, and Rose Byrne have aged only five years since First Class, which was set more than 20 years before this film? A: Not as much as the fact that Oscar "Poe Llewyn Dameron Davis" Isaac's face and voice are both buried, though his eyelids remain recognizable, somehow. (Good luck mining anything he does in this movie for a hilarious GIF.) As his evil henchwoman Psylocke, a near-silent Olivia Munn sports a purple dominatrix getup that's both true to the comics and laughably unsuited to combat, but at least she looks cool.

The cinematography is by Singer's usual cameraman Newton Thomas Sigel, who also shot the similarly '80s-fixated thriller Drive. Here, he manages a breathtaking otherworldly tableau just often enough to underline the movie's stasis. Even at two-and-a-half hours — a serving-size that has become as inflexible for superhero movies as 22 pages once was for single-issue comic books — Apocalypse barely shifts out of setup mode.

That's peculiar problem for a sixth installment that also seems to be intended as a second trilogy-capper to have. But then deja vu abounds: Apocalypse's best bit is a reprise of superfast mutant Quicksilver's (Evan Peters) lightspeed routine from the prior movie. Again, the gag is set to a period-appropriate pop song, but it's not as canny a selection as before.

This pervasive sense of "more of the same, but less" wouldn't be nearly so disheartening coming from a filmmaker whose career began with less promise than Singer's. He made his name with 1995's The Usual Suspects, a crime picture that was unique enough to spawn a cottage industry of parodies. He's worked steadily on a variety of material since, but still: Four of these now. There's nothing cheap or weird or, Heaven forfend, short about an X-Men movie anymore. He's just going where the work is.