Accessibility links
'High Highs And Deep Lows': 5 Days With Doctors Without Borders In South Sudan In the past year, dozens of hospitals run by the medical aid group Doctors Without Borders, also known as MSF, have been attacked. NPR spends a week with two doctors in a hospital inside an enormous refugee camp in South Sudan to find out why they work in dangerous places, and what the work is like. 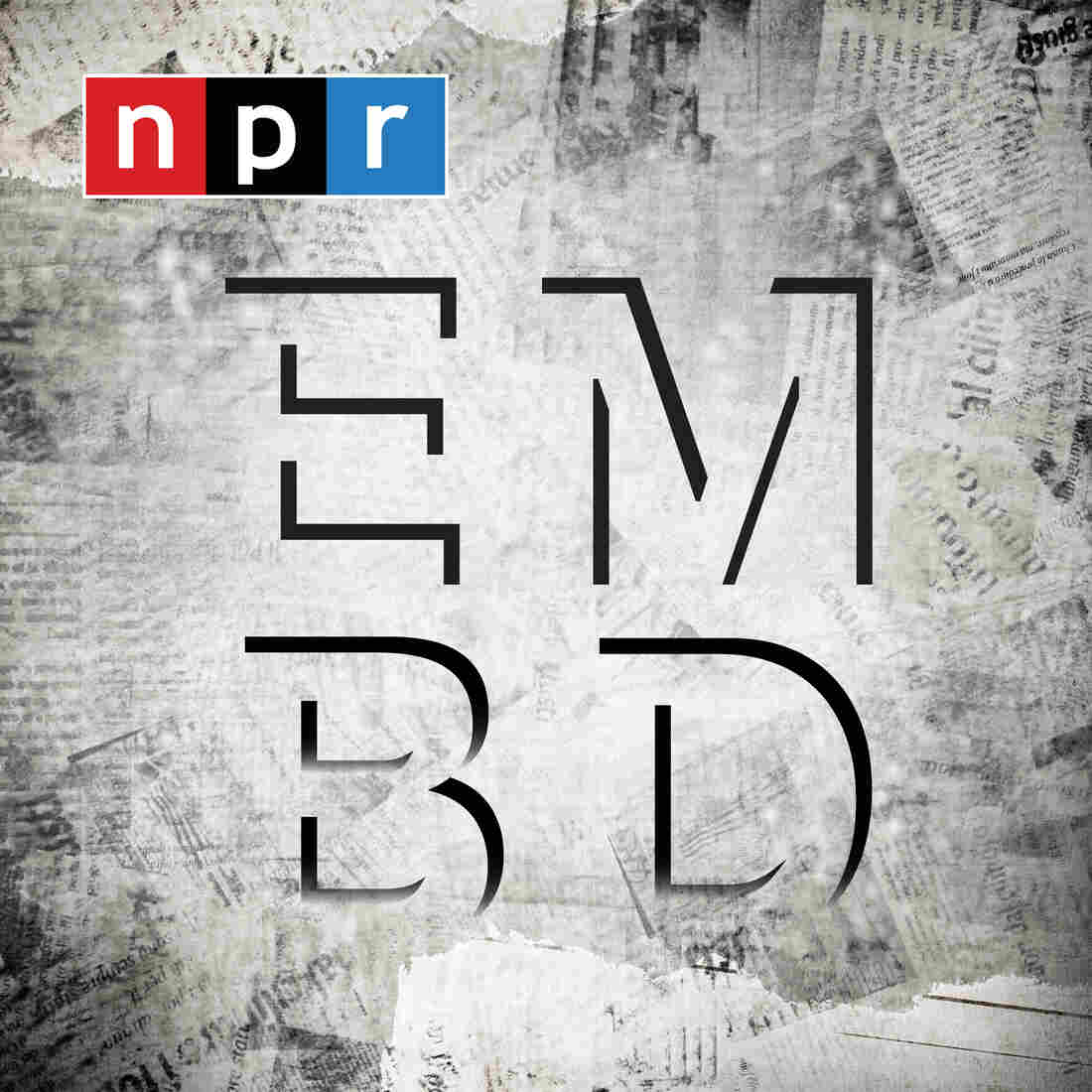 In the past year, dozens of hospitals run by the medical aid group Doctors Without Borders, also known as MSF, have been attacked. NPR spends a week with two doctors in a hospital inside an enormous refugee camp in South Sudan to find out why they work in dangerous places, and what the work is like.

Hospitals run by Doctors Without Borders, also known as MSF, have been coming under attack in recent months in Syria, Yemen and Afghanistan. Yet the organization is doubling down, continuing its work where it can in many of the world's most dangerous places.

For the NPR podcast Embedded, I spent a week in an MSF hospital in South Sudan. That country has just been through a brutal civil war. I was there with NPR's Jason Beaubien, and our story follows two doctors who work in the hospital and one tiny patient whose case says a lot about what keeps these doctors coming back.

JASON BEAUBIEN, BYLINE: The MSF hospital has 170 beds, and it's made up of a bunch of big, white tents. The hospital compound is a one corner of what's grown to be the largest refugee camp in South Sudan.

MCEVERS: One of just 2 doctors in this hospital is a pediatrician from Holland. Her name is Jiska Steensma. She's working in one of the wards for severely malnourished kids, and she's treating a very sick baby. The baby's name is Nyenyowni, and she's tiny. She also has malaria and a respiratory problem. Breathing is getting slower and slower.

Dr. Jiska tells a nurse to hold the baby's leg while she opens a package that contains a really thick needle.

JISKA STEENSMA: It goes into the bone.

MCEVERS: She has to push the needle into the baby's bone. It's a bone marrow IV. The baby starts getting the fluid she needs, and her breathing evens out. She's a little bit better, but really she's not. And in this moment, it all seems so unfair. This baby didn't do anything. She was born, and then she didn't get enough to eat. And now this.

It's going to be hard to not sit here all day. This baby was definitely going to die when she was putting in the IV, basically when she was shoving a needle into this girl's leg bone and the girl didn't react. I just can't seem to leave.

So I sit there for about a half an hour, and then this happens.

The nurse says the baby's awake and asking for water. Dr. Jiska and I are surprised.

STEENSMA: What age is she again?

BEAUBIEN: The girl is not a baby. She's 3 years old. She is so small. She only weighs 15 pounds. But this whole time I and the doctor thought she was a baby. This tells me her situation is way worse than I thought. But right now she is drinking water and she is crying, and that is good.

BEAUBIEN: Jiska is clearly affected by sick patients like this. You can see it in her face. She's smiling like crazy when things go right. She's all twisted up and worried when they don't. We've been trying for days to get her to talk, to sit down. But she's always too busy. She's in that zone, working with the kids. Eventually, Kelly finally sits down with her in an office, and Jiska says when she first got to the hospital, it was really hard.

STEENSMA: Just getting used to the mortality, to the children dying, to every two or three nights on call - big hospital. I remember at first I did have nightmares, but that lasted, you know, the first week, I think.

BEAUBIEN: She says now she's so immersed in this situation, she can't even imagine being back at home in Amsterdam.

STEENSMA: I feel happy being here. I mean, it's hard work. You've seen it, and it's really, really frustrating. It has really high highs and deep lows but is really rewarding as well..

STEENSMA: ...As - just as well as it is super frustrating. It's not always fair. But yeah, here, sometimes you do think, OK, there's just not enough for these children. And sometimes a few die. I think you write down cause of death, then sometimes I do think, born in South Sudan. So we're lucky.

MCEVERS: The next day, the other doctor who works in this hospital, Navpreet Sahsi, is on duty. The patients call him Dr. Nav. I meet up with him in the ward for malnourished kids, and he's asking the staff about the sick girl, Nyenyowni. Nav says it's not looking good.

NAVPREET SAHSI: She's still - I mean, the one good thing - she's got some strength in her. She'll still kind of respond a little bit if you - you know, she'll kind of look at you if you kind of get her attention. Earlier, she was sitting up a little bit with mom but still very, very drowsy.

SAHSI: You know, so that's her. She's the sickest person on the - in the ward, probably in the hospital right now. And let's just look at her medicines here.

BEAUBIEN: This is Nav's second mission with MSF. His first one was in Yemen. Things got so bad during that mission. The fighting got so close to their hospital.

SAHSI: There was gun shooting and tank shooting and missile shooting all day, every day. And there was some very close incidents. So after - you know, during my first mission, I came - I almost came at peace with the idea that, you know, I may not make it out of that mission.

BEAUBIEN: One day, a mortar smashed through the window of the hospital. After that, MSF declared all its foreign workers including Nav had to leave. He says it felt like a failure. He'd been working so hard to help the patients, and then he was abandoning them. So he signed up for another mission here in South Sudan.

SAHSI: Where is the need? Is the need to really, you know, in the downtown of a big city where there's, you know, tons and tons of doctors, or is the need in a place where there are no doctors and no health care resources in that environment? I mean, there's a huge opportunity to make a big impact on other people's lives.

MCEVERS: So we are still in the ward for malnourished kids. And Dr. Nav tells the staff to keep a close eye on Nyenyowni, the tiny 3-year-old girl.

MCEVERS: A few hours later, someone comes to tell me an emergency was called in the girls ward. I try to go.

Dr. Nav got called to resuscitate the girl, and now I'm standing at the hospital door.

Nav walks by and just nods his head.

She died. She died. So I'm standing here at the entrance to the hospital because we don't want to, you know, bum rush them during this moment. But it happened. She died. Sunday - I mean, it's not been looking good for a couple of days, right? But it finally happened.

Dr. Nav walks away, says he needs a few minutes. A little bit later, we talk. He says the girl died of severe malnutrition and severe malaria. When Dr. Jiska finds out, first, she's upset. She wants to know if there's anything else they could've done. Then later she tells me she's accepted it. She has to believe they did what they could.

By the time I go back into the ward, there's another patient in Nyenyowni's Bed. I keep thinking about that thing Jiska told me - that the highs are so high here because the lows are so low. Like, the smallest thing can be amazing after the worst thing happens. Life doesn't feel that way in Amsterdam.

BEAUBIEN: Every week, there's this thing that the staff does for the kids at the hospital. A Dutch guy named Frank - he gets out his guitar.

BEAUBIEN: But pretty soon, the women and the kids - they hijack Frank's sing-along. They start singing the South Sudanese songs. More people crowd around.

MCEVERS: All the international staff is there. Nav is blowing up balloons. Everyone's dancing. There are a lot of people in this hospital who are still alive.

CORNISH: That was my co-host Kelly McEvers along with NPR's Jason Beaubien. You can see pictures of Dr. Jiska and Dr. Nav and the tiny patient Nyenyowni at npr.org/southsudan.