Accessibility links
Entering Final Primary Stretch, Clinton And Sanders Fight For A California Win Hillary Clinton could lose California's primary on June 7 and still win the Democratic nomination, but she and Bernie Sanders are campaigning hard there, hoping to close out the season on a high note. 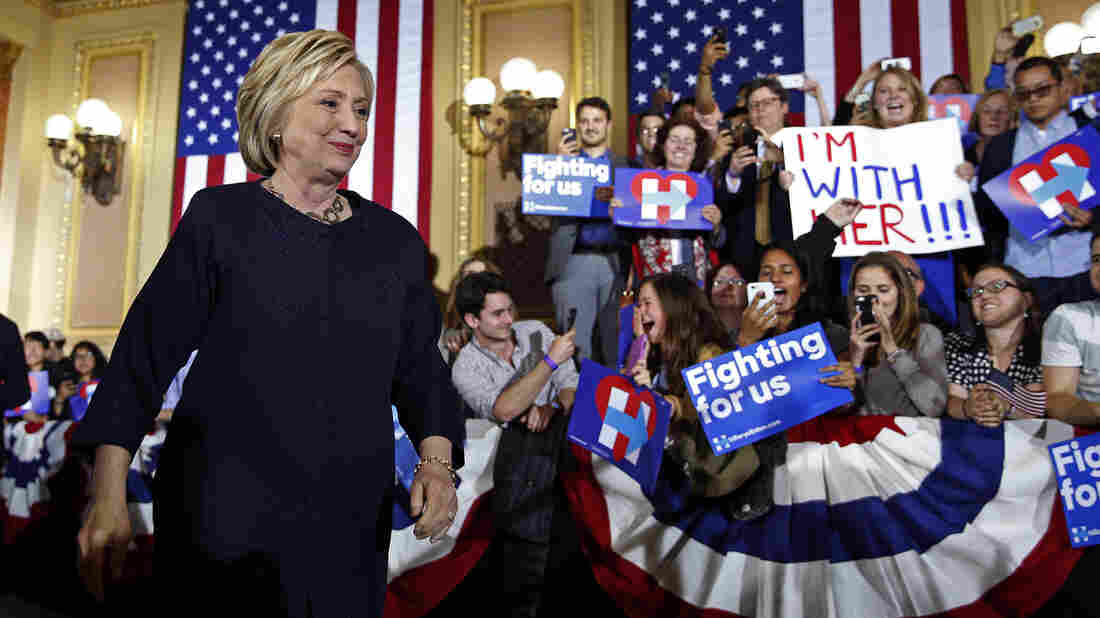 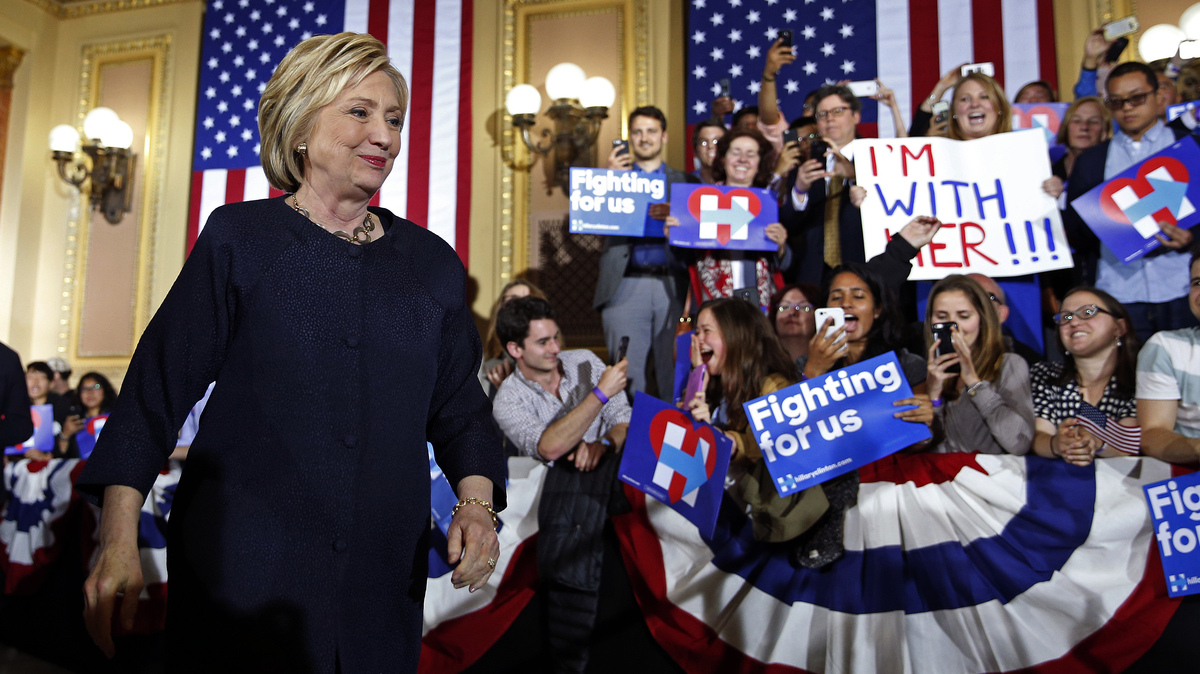 California wasn't supposed to be close. In early polling, Hillary Clinton had a commanding lead, but that lead has all but vanished. A new survey from the Public Policy Institute of California has Clinton in a virtual tie with Bernie Sanders among Democratic primary likely voters — 46 percent support Clinton while 44 percent support Sanders.

The Golden State, which holds its presidential primary June 7, is a big, liberal, delegate-rich prize in what has been a long and increasingly bitter primary fight.

And both candidates are fighting to win California. Clinton wrapped up a four-day swing Friday, while Sanders is in the midst of a weeklong barnstorming of the state.

Sanders pointed out recent polls with some glee at a rally in Santa Monica earlier this week. "She's looking very nervous lately," he said. "And I don't want to get her more nervous, so if you promise not to tell her, we're going to win here in California."

Clinton, meanwhile, has been more focused on the general election than on the primary.

"Send a message," she said in San Francisco. "Send a message to a demagogic, rhetorically divisive and dangerous candidate that when you think about the future you don't see Donald Trump's face up there."

The reality is, with all the superdelegates who have announced their support for Clinton and her very large lead in pledged delegates, Clinton will almost certainly clinch the nomination before the polls even close in California. So why is she competing so hard in the state?

It's all about psychology, says Jack Pitney, a professor of government at Claremont McKenna College.

"She wants to end the primary campaign on a high note, and losing California would end it on a low note," he said. "She wins the nomination, but loses the psychological warfare to Bernie Sanders."

As Clinton has traveled the state, the reception hasn't been entirely friendly.

In Salinas, a mix of what looked to be Trump and Sanders supporters gathered outside a Clinton event. They chanted and waved signs about her speech transcripts, email server and relatively hawkish foreign policy views.

Clinton supporter John Silva was puzzled by the protesters.

"You're either with Hillary or you're with Trump," he said.

Silva was wearing a black T-shirt with big white letters reading "Dump Trump" and admits he is more motivated against Trump than he is for Clinton. Silva initially supported Bernie Sanders, but now he plans to vote for Clinton in the primary.

"You know, I wish it would end so that all the concentration would be against Trump and the Democratic Party can unite against Trump," Silva said. "That would be a big plus for the party, and I think for America."

Clinton needs more voters like Silva if she's going to unite the party. She has started making that pitch in California.

"We, Sen. Sanders and I, our supporters together, have so much more in common together than we do with Donald Trump," she said in San Jose.

Even a California loss for Clinton wouldn't really change the race, because she and Sanders would very likely split the state's delegates, says Mo Elleithee, executive director of the Georgetown Institute of Politics and Public Service. He worked on the Clinton campaign in 2008.

"I think they would like to send a stronger message," he said, "but at the end of the day the nomination process is about math much more than it is about momentum. Math beats momentum every time."

That's probably not what Sanders and his supporters will be saying heading into the July Democratic convention if he is able to pull off a win in California. A Golden State victory would be a big part of Sanders argument to superdelegates that they should flip and support him.