Accessibility links
Be Like Bernie: Sanders Looks To Spread His Political Wealth He's beginning to expand his political network by helping upstart progressive congressional candidates and state legislators, lending his fundraising prowess and national fame to boost their bids.

Be Like Bernie: Sanders Looks To Spread His Political Wealth

Be Like Bernie: Sanders Looks To Spread His Political Wealth 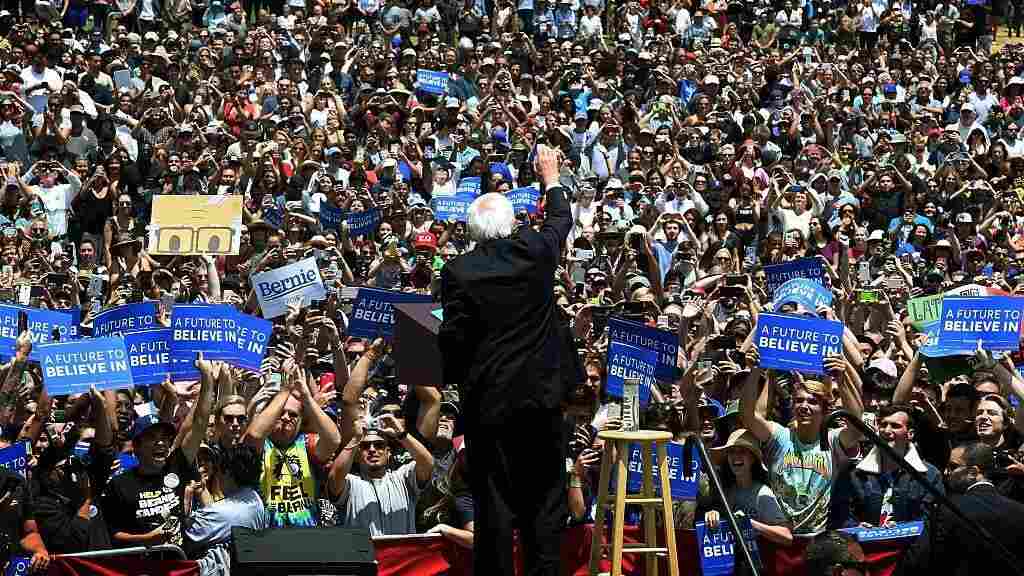 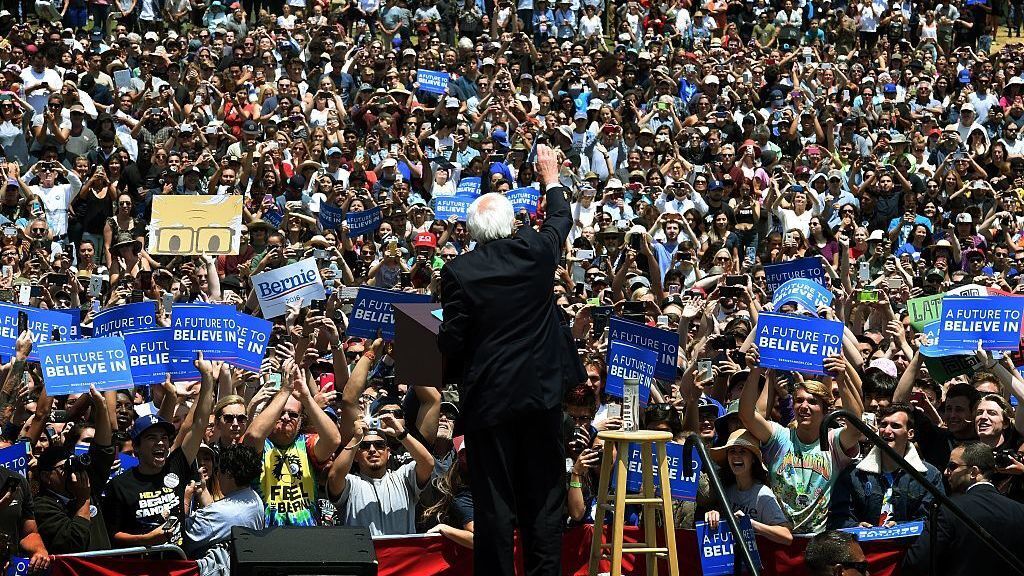 The political revolution that Bernie Sanders began may still be felt at the ballot box this November even if he's not the Democratic nominee for president.

The Vermont senator is beginning to expand his political network by helping upstart progressive congressional candidates and state legislators, lending his fundraising prowess and national fame to boost their bids.

And win or lose for the White House hopeful, Sanders's candidacy has given them a prominent national messenger and new energy they hope will trickle down-ballot in primaries and the general election.

"Bernie Sanders is really building this political revolution all the way up and down the ballot," said Matt Blizek, MoveOn.org's electoral field director. "His entire campaign, the mantra has been 'not me, us.'"

No Sanders Vs. Trump Debate? Sad!

Sanders underscored that belief as he turned his attention this past week to helping several progressive candidates in races at both the national and local level.

On Tuesday, he announced he had sent emails to his massive supporter list to raise cash for eight state legislative candidates in South Carolina, Wisconsin, South Dakota, Illinois, California, Colorado and Vermont.

"Bernie believes that the path toward bold change requires leaders to take back control of state capitols around the country and ensure fair redistricting in 2020," Sanders campaign manager Jeff Weaver wrote in a release announcing the endorsements. "The leaders we're raising money for today are the members of Congress, senators and presidential candidates of tomorrow."

Sanders followed that up on Thursday when he sent a fundraising plea on behalf of former Wisconsin Sen. Russ Feingold, who's in a rematch with GOP Sen. Ron Johnson in a race critical to the balance of power in the Senate.

But his most shocking endorsement came over the weekend, when he told CNN's Jake Tapper he was backing progressive Tim Canova in his primary challenge to Democratic National Committee Chairwoman Debbie Wasserman Schultz (Fla.). It's highly unusual for a sitting member of Congress to endorse against another incumbent, but was unprecedented for a presidential candidate to do so, let alone the leader of the party whose nomination he's seeking.

That break may have reinforced something party stalwarts have long been skeptical of — this independent senator's commitment to the party at large. After all, rival Hillary Clinton — who still leads him in both pledged and superdelegates by a nearly insurmountable margin — has long been fundraising for state and national Democrats. By the end of April, she had raised more than $46 million for the DNC and state parties through her Hillary Victory Fund.

Sanders hasn't done that yet, and many began to wonder if the candidate would have lingering allegiance to his newly-adopted party. But his actions this week show he does have a plan to wield his legacy on other like-minded candidates — but ones who similarly eschew the Democratic establishment and espouse his same populist, progressive ideals.

"A shot in the arm" for candidates

For candidates who have received the Sanders blessing, it's changed the trajectory of their campaign almost overnight.

Canova, a law professor who's challenging Wasserman Schultz in her Southern Florida district, was driving by himself to a campaign event when his phone started buzzing last Saturday. A staffer told him they had gotten a call from a CNN producer that Sanders had just endorsed him in an interview with Jake Tapper set to air Sunday on CNN's "State of the Union." The next phone call was from that producer asking for a reaction.

Canova was already attracting attention for his upstart challenge to the sitting DNC chairman, who has come under fire from Sanders and other progressive activists for her handling of the primary campaign between the two. It was a slow burn for the liberal hopeful. 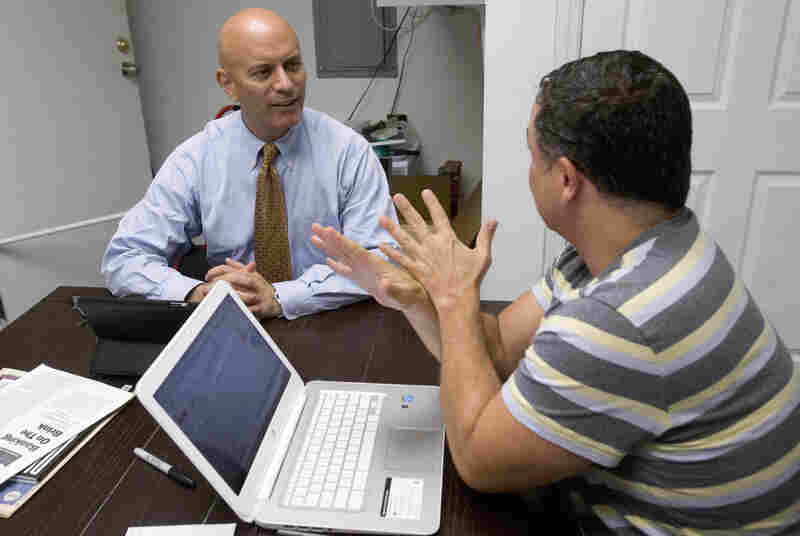 But once the Sanders endorsement came, it was like a spark became a wildfire. Over the weekend, he raised $250,000 after the news broke.

"The Sanders endorsement has been like a big shot in the arm for excitement and energy and fundraising, and I'm very grateful for his support," Canova told NPR in an interview Tuesday.

He's had one conversation with Sanders since his surprise endorsement, and said the White House candidate told him he'd been planning on endorsing him for a while. But when CNN asked about it, the timeline sped up.

Canova had already endorsed Sanders's presidential bid and had previously served on an advisory committee the Vermont senator created on reforming the Federal Serve several years ago.

To him, the Sanders blessing is a validation of everything he's been arguing in his uphill challenge to one of the most powerful women in Democratic politics — much like Sanders has been doing over the past year.

"I think there's a real anti-incumbent mood, and it's part and parcel of this progressive wave, and I think Bernie Sanders has really inspired that and helped build it further," Canova said.

In Nevada, Lucy Flores experienced her own windfall when Sanders endorsed her congressional campaign. The former state legislator and 2014 lieutenant governor nominee is in an eight-way Democratic primary for the right to challenge Rep. Crescent Hardy, one of the most vulnerable Republicans in the country.

Like Canova, she'd endorsed Sanders long ago and campaigned for him in Nevada. This time, he returned the favor, and the presidential candidate's fundraising plea on her behalf raised just under $600,000 for her campaign.

"It really gave us the ability to compete on big ticket items like TV and other expensive modes of communication. And it really helped us expand our campaign and be able to compete against very, very big money interests," Flores said. One of her chief opponents, state Senate Minority Whip Ruben Kihuen, has been endorsed by both Senate Minority Leader Harry Reid, D-Nev., and former President Bill Clinton. Nevada education leader Susie Lee has been endorsed by EMILY's List.

She's hopeful that due to Sanders's rise, issues they've both long been talking about like a minimum wage increase, decriminalization of marijuana and Wall Street reform will now stay in the forefront.

"It's not so much that we are all espousing views that all of a sudden became popular," Flores said. "Those are issues that matter to the everyday person. Now, because of Bernie I think, people are starting to make that connection between those issues and candidates."

Progressives know that presidential years are better for their chances too, where the electorate leans more Democrats and a higher percentage of women, minorities and young voters turn out to the polls. 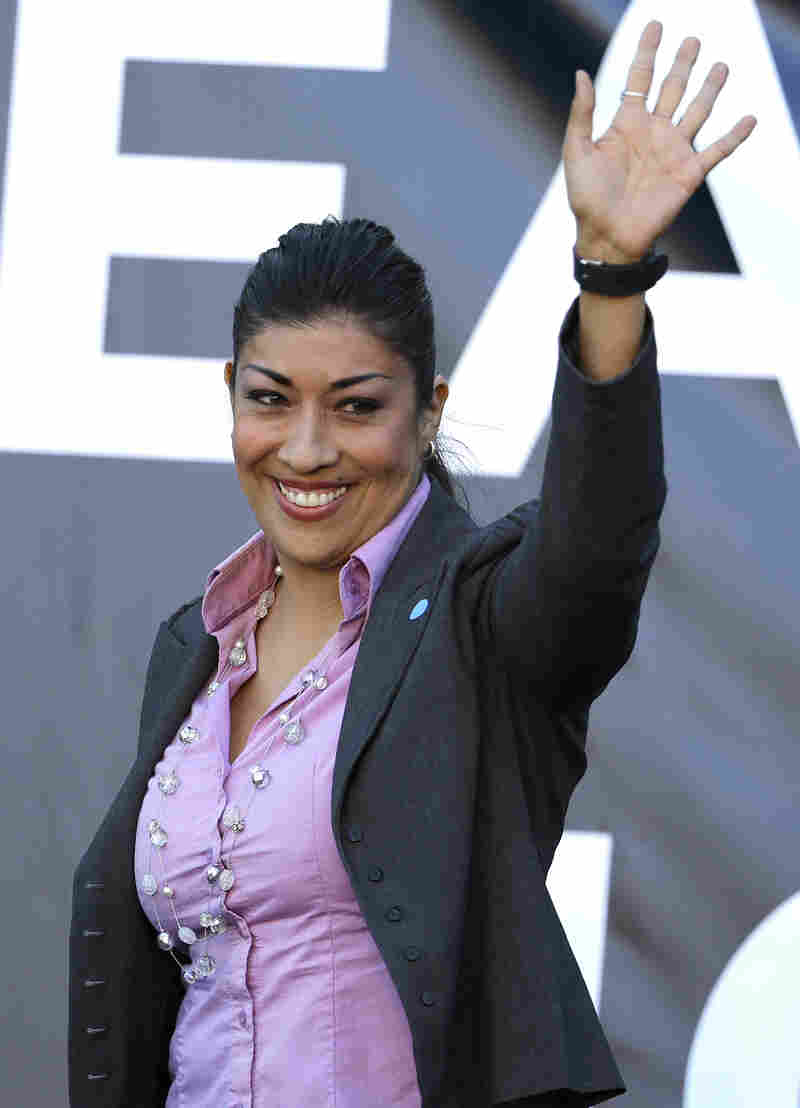 And even in 2016, they'll have to prove their mettle in some of these House contests. Targeted races for Flores in Nevada and Teachout in New York are GOP-held swing seats, and Republicans welcome the chance to take on the most progressive nominee. And if these candidates are nominated and lose, national Democrats can argue they need more moderate nominees in such toss-up races.

But Flores argued that in 2014 many Democrats ran away from their party, and Democrats ultimately paid a price. Now, she said, the issues they're talking about will energize their base and motivate them to turn out. It's a similar argument that Sanders has made about Clinton as he points to polls showing him performing better against presumptive GOP nominee Donald Trump

"The party was moving toward the centrist, anti-working families agenda," Flores said. "The result was that you saw a lot of people get disenfranchised and disenchanted with the system."

The leader progressives have been waiting for?

For progressive groups who have endorsed Sanders and many of the same candidates he's now backing, his turn of attention to down-ballot races is a very welcome development.

"Throughout this campaign, Sen. Sanders has been focused like a laser beam in building progressive power both in the short term and in his presidential campaign," said Neil Sroka, spokesman for Democracy for America. "I think the work that he's doing supporting a lot of the candidates that he's announced so far is a reflection of that focus."

DFA, Sroka said, has also recommended many candidates to Sanders to endorse and is working to continue to identify like-minded progressives who could benefit from his help. And with the grassroots training they've done with Sanders volunteers on things like phone banking, door-knocking and fundraising, they're hopeful that will have a trickle-down effect too.

"A lot of people gave Sen. Sanders flack for not getting involved in these races earlier, but the reality is he's got a presidential campaign to run," Sroka said. "As a campaign themselves they should be focused on winning their race. That's one of the reasons we've stepped in."

While other leaders like Massachusetts Sen. Elizabeth Warren has also proven critical to progressive fundraising and excitement, like-minded groups say they're excited to see how Sanders uses his newfound popularity beyond the presidential cycle.

"We're excited to be building infrastructure for progressives running at every level, and hopefully we're going to see in addition to the Sanders energy coalescing around these House candidates, but also to activists saying, 'Hey, I'm going to run for school board, I'm going to run for city council,'" said Stephanie Taylor, co-founder of the Progressive Change Campaign Committee.

Progressive leaders particularly praised Sanders's attention to state-level races, something often overlooked in national politics but are contests that can prove especially critical when it comes to redistricting — which was detrimental to Democrats after their massive 2010 losses.

"He's bringing this national attention to down-ballot races and the importance of state legislative races. He's saying that it isn't just about the presidency," Taylor said.